The first thing to say here is that we don’t seriously expect many or any of you to actually be able to buy a Digital Projection Titan Reference 1080p 3D projector. They do, after all, cost between £90,000 and £96,000. Each.

However, the gadget lover in us is always irresistibly drawn to uber-expensive kit if only to find out just why/how anything can cost so much. Especially as experience has shown that it’s often the very expensive stuff which introduces key technologies that eventually filter down in some form or other to more mainstream products. In other words, high-end gear can be a living, breathing vision of the future.

As we’ll discover, though, the Titan Reference 1080p 3D projector unfortunately feels more like an unwelcome trip down memory lane than a gleaming glimpse of what’s to come.

If you’re the sort of person who likes something physically substantial for your money, than the Titan gets off to a great start by being absolutely ruddy huge. It actually arrives in two boxes – one humungous one carrying the 31kg, 645mm long projector chassis, and a smaller one carrying the also massive lens, which locks into a gaping hole in the main chassis and sticks out the best part of a foot from the projector’s front edge. 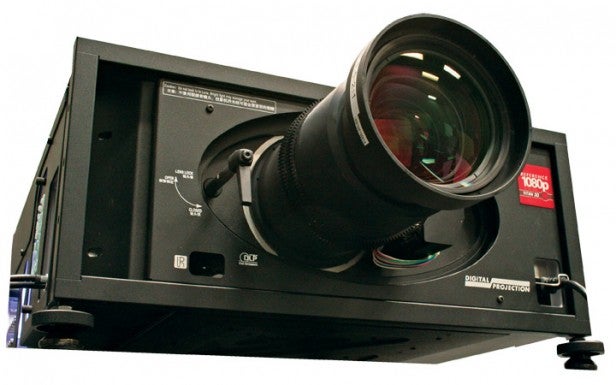 This all underlines in fat red ink the idea that this is a serious, almost commercial-grade bit of custom-install kit rather than some bit of fluff you can just pop on a coffee table when you fancy a bit of projector fun.

While the uncompromising nature of the Titan’s bodywork might raise plenty of expectations about the quality of what it’s got inside, though, it sure isn’t pretty by any normal aesthetic standards. Just as well it will likely be boxed away somewhere in a perennially darkened room.

For a projector costing this much to give you composite and S-Video options but no HDMI inputs immediately reveals that rather than the bleeding edge bit of technology you might have expected, the Titan 3D is actually rather old now.

This doesn’t intrinsically matter, of course, provided its age doesn’t stop it performing insanely well. But the lack of any HDMIs presents an actually quite devastating problem for 3D viewers. For it means there’s no HDMI v1.4 support on the projector, which in turn means the projector won’t ‘handshake’ with the vast majority of 3D Blu-ray players.

In fact, the Titan shouldn’t be able to handshake with any 3D Blu-ray players, though Digital Projection has found – and we can confirm this – that Samsung C5900 and C6900 Blu-ray players do seem happy to speak to the Titan, presumably on account of their not being as strict in looking for the v1.4 protocols as other players.

We tried a PS3, two standalone Sony 3D Blu-ray players, and a Panasonic 3D unit, and all of them refused point blank to acknowledge the Titan as a 3D device. We weren’t able to test the newer Samsung D6900 Blu-ray deck, but we wouldn’t be at all surprised if it didn’t work.

Even our Samsung C6900 was a bit hit and miss about when it decided to play 3D into the Titan, though this could be because our player is a pre-production sample; Digital Projection reckons it hasn’t had any problems with its own C6900.

Needless to say, this is an utterly crazy situation to be faced with on a bit of kit costing £90k. Especially as the Samsung players we’re talking about here are hardly the last word in Blu-ray quality. A unit like the Titan surely ought to be fed an immaculate signal from a high-end Blu-ray player, not some decent but hardly state of the art mass market machine like the C6900/C5900.

The Titan will, at least, play Sky’s side by side 3D broadcasts with no problems, though obviously these are at a lower resolution than 3D Blu-rays, and you can certainly see the difference when watching them on the sort of large screens the Titan was ‘born’ to fill.

We found the projector’s 3D menus to be pretty confusing during our tests, though to be fair the Titan will obviously be installed professionally for anyone rich enough to buy one. The installer will also, of course, wrestle with Digital Projections exceptionally sophisticated and rich ColorMax and Xenon Color Mode calibration systems on your behalf.

Looking inside the Titan 3D’s bodywork for answers to why it costs so much uncover a number of key things. We’ve already discussed the spectacular size and apparent quality of the lens, but also key is the projector’s carriage of not one but two separate 350W lamps. This enables it to pump out a phenomenal maximum 6000 ANSI Lumens of light, which should prove mighty handy in countering the dimming effect of active shutter 3D glasses. 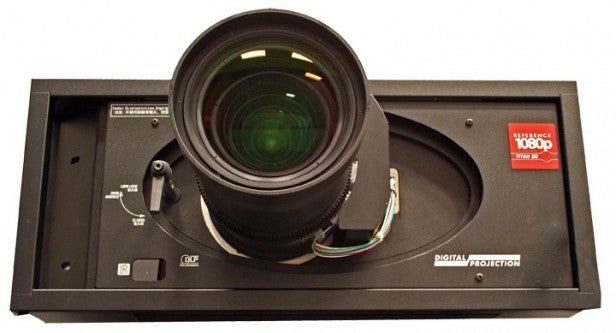 The projector also carries a three-chip DLP engine for fast-responding, noise-free, detailed and colour-rich images with none of the rainbow effect issues associated with single-chip DLP projectors. Plus it boasts Digital Projection’s startlingly clever FastFrame technology to deliver enhanced motion reproduction, and the brand’s proprietary ‘Active-3D sideboard’, which contains a ‘direct to DLP Digital Mirror Device’ high bandwidth input introducing what Digital Projection claims is less than one frame of latency.

The projector delivers up to 16-bit colour processing, and features triple-flash technology to reduce flicker and crosstalk when playing back 24p 3D Blu-rays. Mind you, the Sim2 Lumis 3D-S offers triple flash technology too for a third as much money as the Titan.

One final niggle to report before finding out if the Titan can deliver a performance worthy of its price is that while the XpanD glasses we were sent were comfortable and worked very well, they never seemed to switch off fully, even with the 3D sync transmitter unplugged, which must mean they’ll eat batteries for dinner.

Not surprisingly, the Titan’s picture quality is, in many ways, amazing. The amount of brightness it delivers is unprecedented; almost scary, in fact, if you’ve got both lamps in play (you can choose to only use one if you prefer) and are driving a fairly typical 100in screen in a mid-to-large room. Clearly brightness levels this extreme are capable of driving much larger screens in much larger venues of the sort anyone able to afford £90k on a projector will doubtless have.

As hoped, this level of brightness is a revelation with 3D content, allowing it to appear, despite the presence of active 3D glasses, with a level of brightness and colour punch that we’ve never seen before outside of a commercial cinema. This has a further benefit in that it allows the image to retain more detail in shadowy areas than you get with any less bright solution we’ve seen.

The 3D Blu-ray images – when we got them to work – also looked beautifully sharp and detailed, with the projector’s extreme brightness helping to ram home the advantages of the full HD active 3D system. Crucial to this sharpness, of course, is that the Titan suffers from seemingly no 3D crosstalk noise at all. Throw in some effortless natural motion handling, and the Titan is in a class of its own where 3D is concerned (though it only trumps the Sim2 Lumis 3D-S in brightness terms).

Deactivating one of the lamps really does reduces the image’s brightness considerably, and so isn’t recommended if you want to get the best 3D impact from your huge investment. You certainly can experiment with going down to one lamp for 2D viewing, though, as for us this enabled the projector deliver a deeper black level response and more relaxing colour palette that’s still more than bright enough when you haven’t got your 3D goggles on.

In 2D mode the phenomenal precision of the Titan’s pictures in terms of their breathtaking clarity, lack of video noise, and colour accuracy/range is awe-inspiring, with the projector’s high brightness output doing a grand job of literally shining a light on the formidable quality of the Titan’s optics and processors.

The extreme brightness output of the Titan does cause a trio of considerable concerns, though. First, we struggled to get a really convincing black colour from our machine – no great surprise given that the projector claims a 5,500:1 (native) contrast ratio which doesn’t stack up well against the native 100,000:1 native contrast figure of the JVC X9 3D projector (a snip at £9k!). Though of course, this JVC only delivers a maximum brightness output of 1300 Lumens… 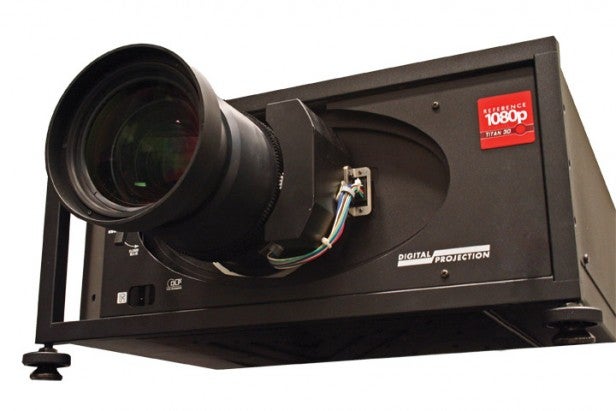 Using the Titan with a much larger screen than we were able to might dilute the impact of the brightness a bit and thus result in deeper blacks. And black levels look fine with your 3D glasses on. You can also improve the projector’s contrast via a specific lens/optical option at the expense of a chunk of brightness. But nonetheless, black level response from the Titan remains an issue we don’t feel entirely comfortable about.

The second problem raised by the projector’s extreme brightness is that it makes a frankly enormous racket – more than 40dB – when it’s running, regardless of whether you’re using it in a two- or one-lamp configuration. This is something your installer will have to work around during installation.

The combination of two powerful lamps and the clearly hard-working cooling fans also raises real concerns about energy consumption with the Titan. Digital Projection admits that it uses up to more than 900W – compared with around, say, 350W for the JVC X9.

For some reason our sample continued to whir away a little to itself even when it was in standby, too – and where there’s a whir, there’s more power consumption. This is not the projector to buy if you’re striving toward a carbon-neutral future.

Verdict
The Titan 3D projector clearly has the raw power and optical precision to deliver a uniquely powerful 3D performance – so long as you’re not a particularly big fan of inkily deep black levels and don’t mind your electricity bills increasing.

However, while it’s clear that the Titan 3D was miles ahead of the game when it first came out, it has failed to move with the times as much as it should have done. Not being able to marry its 3D power to quality 3D Blu-ray sources to any sort of freedom whatsoever just because Digital Projection isn’t prepared to upgrade its connection board/interfaces is ultimately a ludicrous stumbling block that we just can’t bring ourselves to accept on a product that costs at least £90,000.