The Diesel On Full Guard 2.5 is a usable option for those loyal to the brand, for everyone else, it's worth looking at some like-minded alternatives.

If you like your smartwatches big, brash and brutish then this Diesel-branded take from the Fossil Group should be right up your street. This designer wearable makes the Apple Watch 4 and Fitbit Versa look positively tiny in comparison.

The Diesel On Full Guard 2.5 (try saying that name five times, fast) is part of Fossil’s fourth-generation wearable line and is the second watch it’s released under the Diesel brand.

It shares many of the same technologies as other fourth-gen Fossil watches, like last year’s Emporio Armani Connected and the Skagen Falster 2, albeit with distinct stylings across both the hardware and software all its own.

What really sets this watch apart from the crowd has to be its design. Whereas some smartwatches look like mini computers on your wrist, the On Full Guard 2.5 looks very much like a traditional timepiece.

The metal body is unabashedly chunky, with three buttons (one of which is a rotating crown) sitting to the side of the sharp 1.4-inch OLED display. 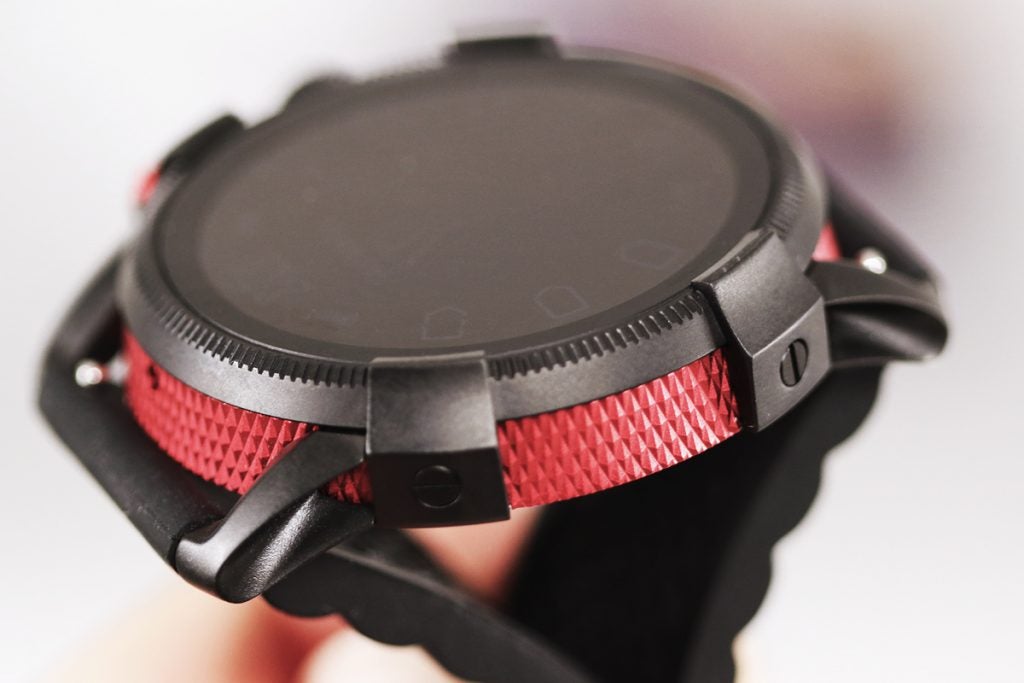 I’m not one for big watches and, as soon as I put on this one, it felt out of place on my relatively dainty wrists. However, if you’re used to wearing sizeable timepieces, such as Diesel’s extensive portfolio of non-smart watches (and like the Diesel ‘look’) then it’ll no doubt feel right at home.

The particular watch I reviewed was sporting the black silicone finish, which comes accented by knurled metalwork running the edge of the body and around the buttons that sported an anodised red treatment – but the On Full Guard 2.5 is available in four distinct finishes that are collectively a blend of black and silver, brushed and polished metalwork, brown leather and blue accenting. 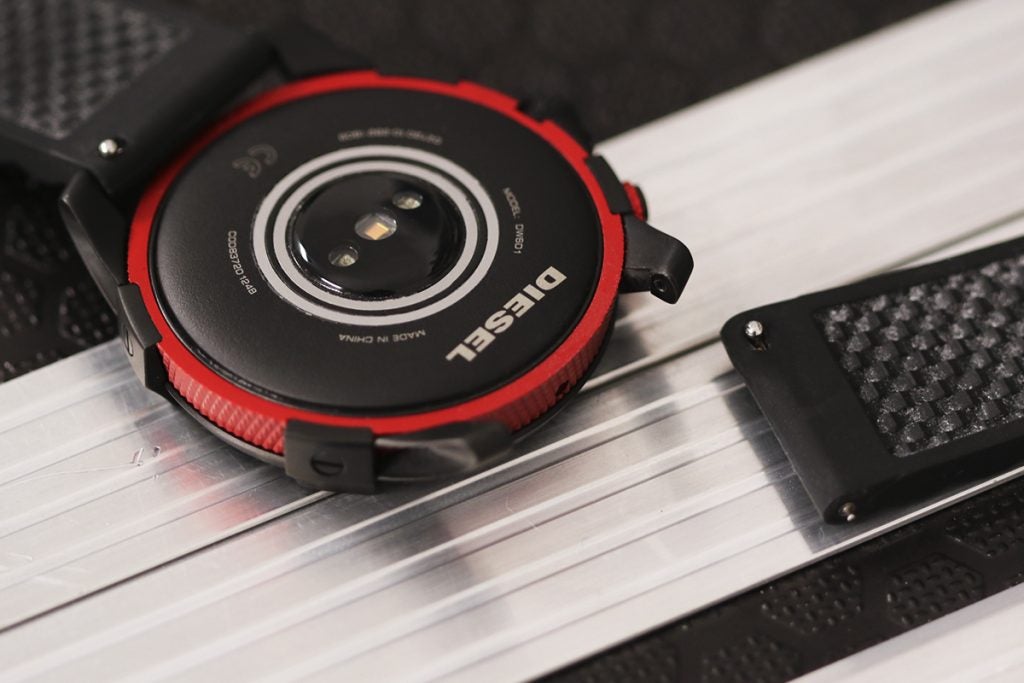 All of the finishes make a similarly bold statement but depending on your tastes, you do have the option of more conservative styling if preferred. What’s more, their design grants you the ability to swap out the included straps with any equivalent 24mm band, made that much easier by the inclusion of quick-release pins.

Screen – A big display for a big watch

Depending on how you intend to use your smartwatch, there’s a chance you’ll spend a notable amount of time staring at that circular display. At 1.39-inches, it’s one of the largest screens out there on a Wear OS wearable (its predecessor sported a 1.4-inch display), meaning text and iconography is easily legible – the 400 x 400 resolution doesn’t hurt either. 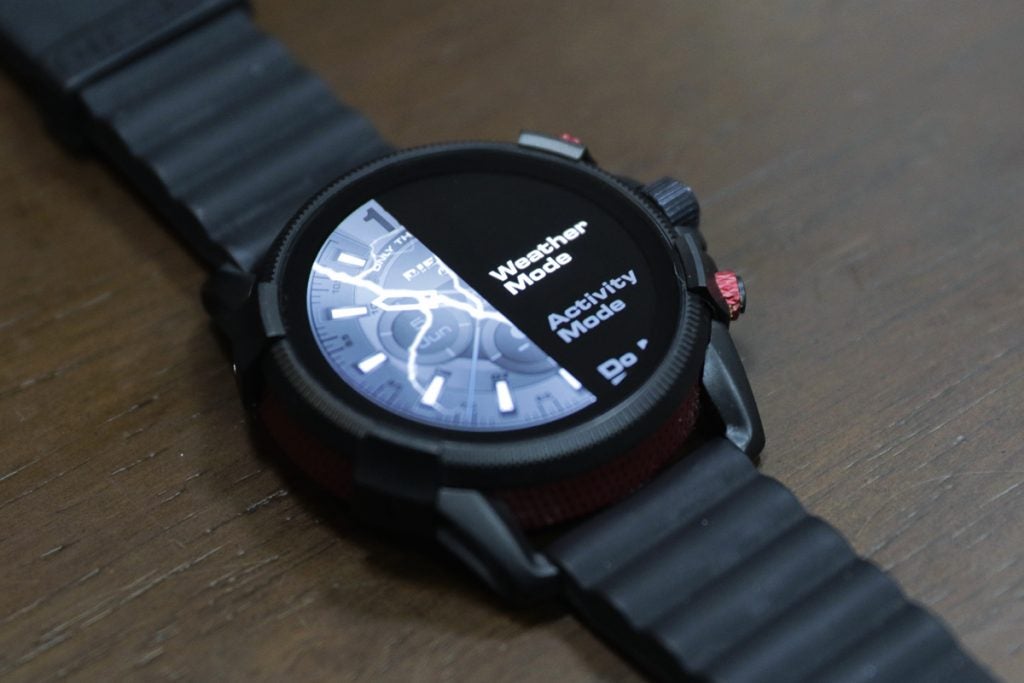 The use of AMOLED tech means it’s nice and vibrant, and contrast is decent too. I’d argue that maximum brightness could be improved so that viewing the watch in full sunlight was a bit easier but it’s still possible to see the screen in most scenarios.

OLED tech also helps support the watch’s always-on functionality, which I prefer as it makes checking the time that much more instant, compared to waiting for the On Full Guard to detect that you’ve raised your wrist in order to ignite the screen.

Being a product of the Fossil Group means this smartwatch sports near-identical internals and software to that of alternatives like the Skagen Falster 2 and last year’s Emporio Armani Connected. Most brands differentiate their experiences with unique watch faces or watch face customisation options but Diesel has taken things a step further. 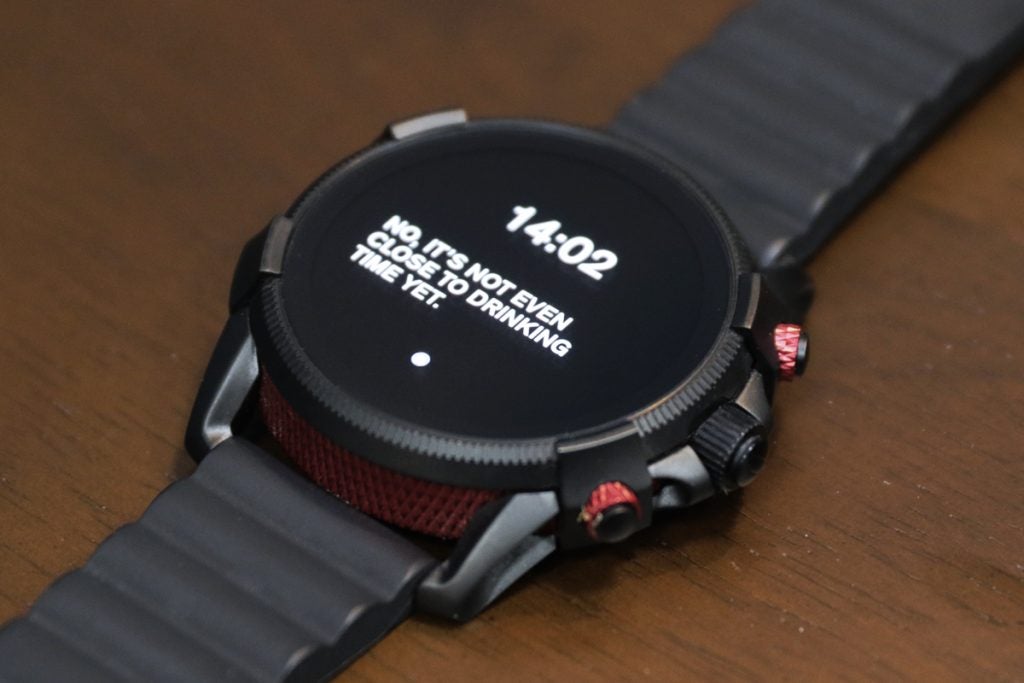 The T-ON-I ‘assistant’ was introduced with the original On Full Guard smartwatch and makes a return for Diesel’s second outing into Wear OS. It pulls data you’re likely to want to keep tabs on, like the current weather or your steps, but presents them with a personified ‘voice’ that’s equal parts indifferent and sassy.

It’s Diesel’s attempt at placing more character into an otherwise function-first experience and I think the team behind T-ON-I have achieved this. On more than one occasion I snickered at news of impending rain and the watch’s suggestion that there wasn’t anything worth going outside for anyway. I also scoffed at its derision at my low step count, even though we weren’t even halfway through the day. 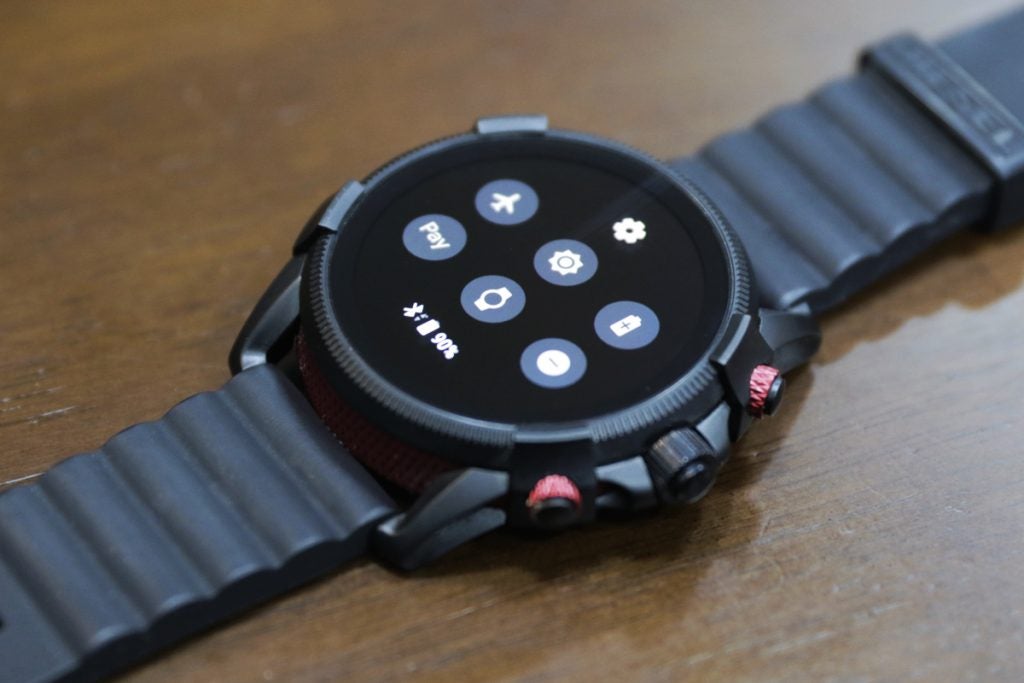 Beyond Diesel’s stylings, the On Full Guard runs Google’s Wear OS. It’s seen a raft of updates recently, with an easier-to-navigate UI and improved Google Fit features – both of which were very much needed, but there’s still work that could be done to offer a more fluid and consistent user experience.

Like other recent Fossil Group releases, the On Full Guard 2.5 boasts proper water resistance (with swim-tracking), integrated GPS for more accurately tracking your runs, an optical heart-rate monitor and support for Google Pay via NFC.

Being able to quickly scan your wrist at contactless terminals to pay for stuff is one of the coolest smartwatch features out there and one of my favourite use cases for wearables in general. As with many of its lunch sibling, the reliability of the On Full Guard’s NFC isn’t as rock-solid as Apple Pay on the Apple Watch, making it a tougher recommendation for daily use. 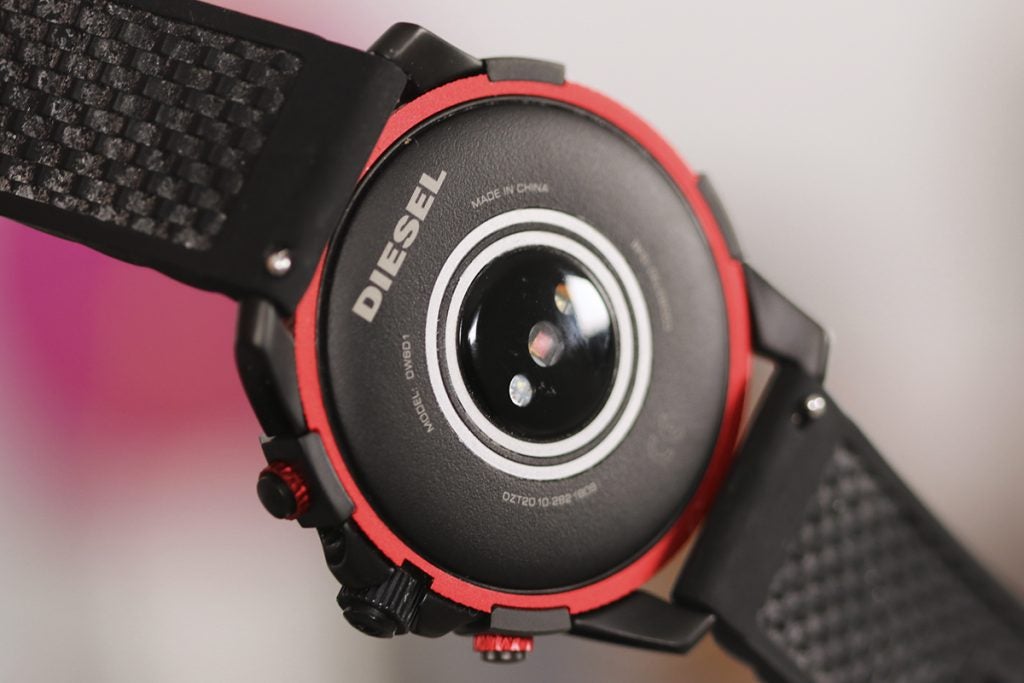 As for fitness tracking, while the bevvy of trackable activities found within Google Fit continues to grow, people looking for reliable metrics shouldn’t place their faith in the hardware on offer here. It’s fine for step tracking and the heart rate sensor isn’t that far off other optical wrist-worn trackers, but for those serious about fitness, turn to wearables from devices with pedigree in this area, like Garmin and Fitbit.

The Snapdragon Wear 2100 is the wearable processor of choice for pretty much every Wear OS smartwatch out there. The problem is that it’s an ageing chip (originally released back in early 2016) and on modern smartwatches like the Diesel On Full Guard 2.5, that age is starting to show. As such, the software feels sluggish and sometimes the Diesel would simply lock up, requiring multiple restarts or at the very least, a desire to be left alone for several minutes while it tried to untangle any muddled processing.

Qualcomm has since launched the Snapdragon Wear 3100 but with improvements focussed wholly on power efficiency, there’s still a question as to whether opting for the newer chip would fix the One Full Guard’s buggy performance.

Perhaps more so with smartwatches compared to phones, mileage will vary depending on your usage habits. The On Full Guard 2.5’s 300mAh is a notable downgrade from its predecessor’s 370mAh cell size, which already didn’t result in the most impressive battery life.

Using the out-of-box settings, with elements like tilt-to-wake (the screen) and touch-to-wake enabled, I ended each day at around 55%, provided I made the jump to battery saver mode in the evening. Add NFC usage into the mix and you’ll see a notable drop, with the On Full Guard finishing each day at 35% instead. 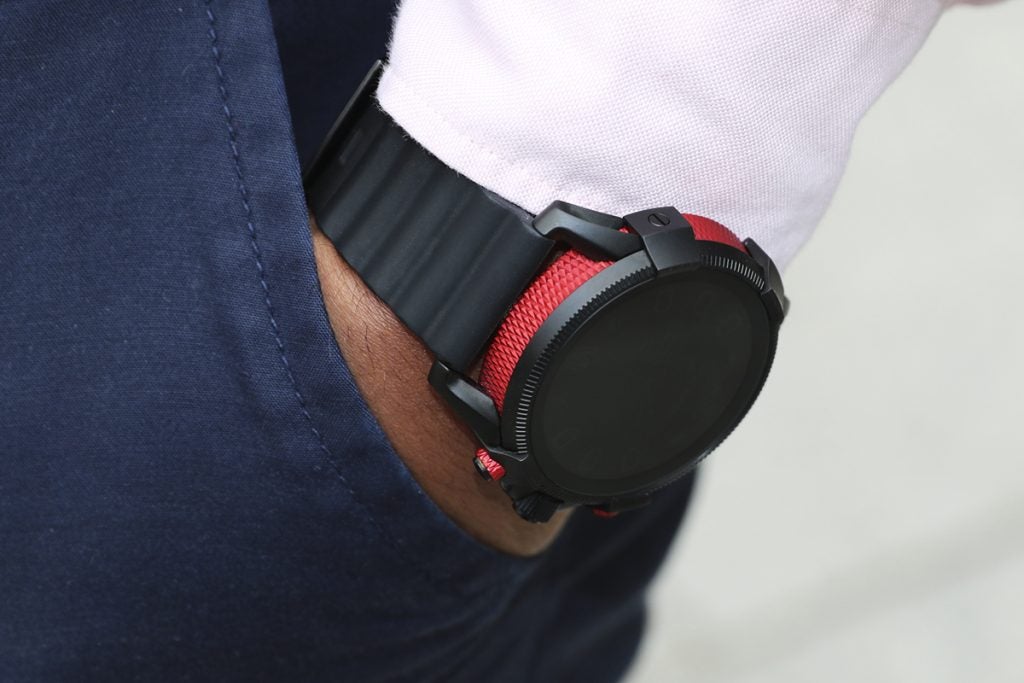 Trading NFC use for constant monitoring from the optical heart rate sensor will leave you with around 45% at the end of the day, and as ever, the biggest killer to wearable battery life is the use of integrated GPS, which although convenient, sapped a hefty 6% after just 15 minutes tracking a run.

As mentioned, I like to set my smartwatch display to ‘always-on’ where applicable, which paired with my light NFC across London transport and a touch of GPS tracking for ten minutes or so to log my walk home resulted in a lowly 23% left in the tank by the end of the day.

It’s unclear why Fossil dropped the battery capacity between generation one and two of the Diesel On Full Guard but in real-world use, it doesn’t benefit the user in any way and effectively stifles how much you’re likely to use the watch’s features, assuming you want to make it to the other end of the day with the thing still ticking (metaphorically).

The silver lining in all this is Fossil’s improved charger design, which still relies on magnets to secure the charger to the back of the watch’s body but now uses a direct connection between two contact points on the charging base and two concentric charging rings on the underside of the On Full Guard.

This means you can still charge the watch in any orientation but it’s far less likely to accidentally misalign or detach, making for a more reliable charging experience.

In 30 minutes the On Full Guard 2.5 filled to 47% charge, in an hour it had reached 85% and the watch was full after a full 1 hour and 20 minutes – underwhelmingly slow for such a small-celled device, but a speed that highlights the value of the fast-charging tech that most modern smartphones offer.

Should I buy the Diesel On Full Guard 2.5?

Like the rest of the latest crop of Fossil Group watches, the Diesel On Full Guard 2.5 is well-stocked with features, ticking all the important boxes that you’d expect from a current-generation smartwatch. But while the image it presents is one of bold confidence, with its distinctive styling and the characterful T-ON-I assistant, there are issues with the execution. 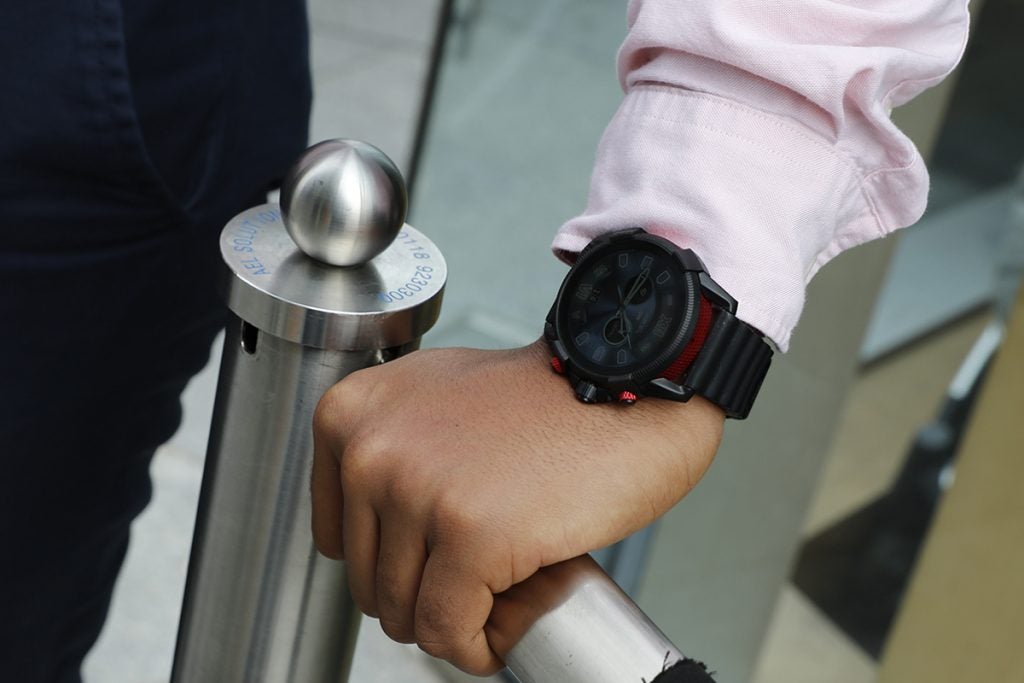 Scratch away the Diesel-branded surface and the underlying hardware just isn’t good enough, especially for the £300+ asking price. The chipset is too dated and laggy, the fitness tracking is inaccurate and the battery life average.

For those committed to the Diesel name in search of a smartwatch that isn’t an Apple Watch, there’s enough here to satiate your desires without feeling completely swindled. For anyone without such brand loyalty, the Diesel On Full Guard 2.5 is a usable option but not a first-choice.