I had intended to take a look at one of these tiny notebooks a while back when they first launched in the UK. Unfortunately I never seemed to get around to it, with no shortage of new notebooks and notebook technologies landing in the TrustedReviews lab at an all too regular rate. However, since quite a few of you have emailed me asking why the Flybook hasn’t been covered on TrustedReviews, I thought I had better get one in and put it through its paces. 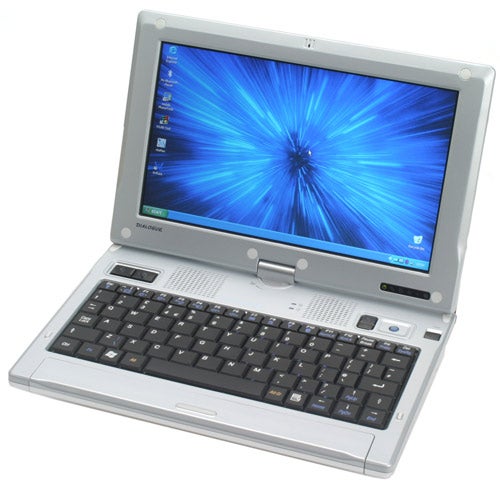 The Flybook is a very small bit of kit – measuring ony 235 x 155 x 31mm (WxDxH) and weighing in at 1.23kg. This makes the Flybook an attractive proposition for anyone that needs a notebook with them all day, every day. But the question is whether the low weight and small dimensions mean that compromises have been made in other areas.


The Flybook is available in a rainbow of colours but this review sample is finished in a rather conservative matt silver. Opening the lid reveals an 8.9in widescreen TFT display with a resolution of 1,024 x 600. Although this isn’t a particularly high resolution by today’s standards, it’s good enough for most instances, as long as you’re working on one window at a time. The screen isn’t the brightest that I’ve seen on a notebook, but this is due to the fact that it’s touch sensitive. 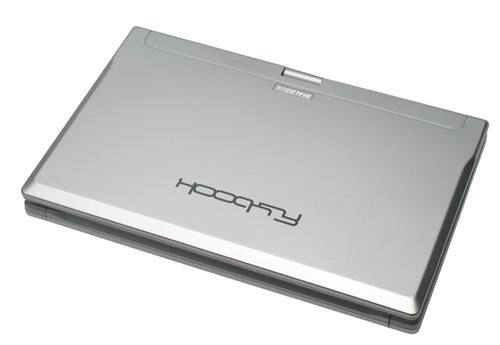 Hiding in the underside of the chassis is a flat plastic stylus for use with the touch screen. I’m actually quite a fan of touch screens on notebooks, having recently reviewed a couple of Panasonic ToughBooks with this feature. It’s very handy being able to just prod at icons with your finger, or even drag windows around the screen. That said, with the small screen on the Flybook, you really are going to have to use the stylus. The screen also swivels around to lay flat against the keyboard – then you can prod at it with the stylus while you’re holding the machine in a clipboard style.


Obviously with a device this small, the keyboard is correspondingly small, so much so that many notebook users may find it difficult to cope with. Now, anyone that regularly reads my notebook reviews will be aware that I’m a big fan of thin and light machines and that I can generally cope with small keyboards. That said, the keyboard on the Flybook really is small, and although I can type pretty well on it, there’s no way I can achieve my normal rate of input. 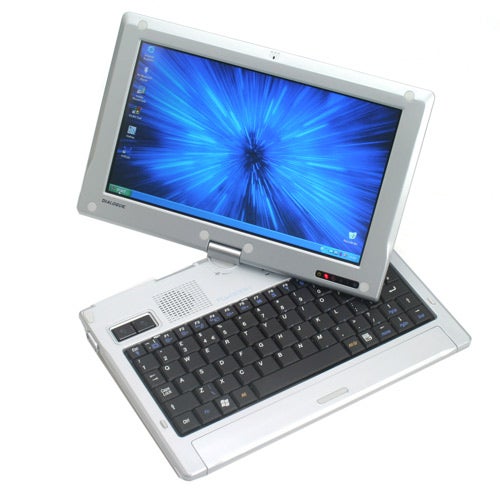 Pointer manipulation comes courtesy of a trackpoint located just above the keyboard. This is a bit of an odd position for a trackpoint, since these devices are usually located at the centre of the keyboard, thus allowing you to keep your fingers in situ when you’re moving the pointer. There are two selector buttons next to the trackpoint and another two on the opposite side of the chassis – although this makes pointer manipulation a two handed affair. 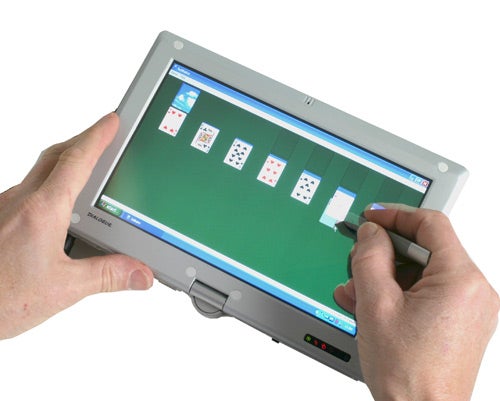 The Flybook is hardly what you’d call conventional when it comes to its CPU. Unlike the majority of notebooks you’re likely to encounter, this one doesn’t have an Intel chip at its heart, in fact it doesn’t even have an AMD processor. Instead, Dialogue has chosen a Transmeta Crusoe for the Flybook. The Crusoe is a low power chip that promised great things a few years back, but advancements by Intel in the mobile arena put paid to mass adoption of Transmeta’s baby. The Crusoe is backed up by 512MB of memory and a 40GB hard disk – hardly major specs, but enough for basic application duty. Basic word processing, web browsing and email is no problem on the Flybook, but I wouldn’t recommend much in the way of Photoshop work. Unfortunately MobileMark refused to run on the Flybook, but I’d estimate about two and a half hours battery life, if used solidly.

When it comes to wireless connection though, the Flybook is very well endowed indeed. There’s integrated Bluetooth and WiFi, but the Flybook’s real party piece is its wireless WAN ability. A small rubber bung on the left side of the casing hides a SIM slot which will accept any GPRS enabled SIM. With the SIM installed you can browse the web or send and receive email without ever having to search for a WiFi hotspot, or insert a data card. Contrary to what you may have read elsewhere, the Flybook wireless WAN capability really is only GPRS speed, and not 3G as some reviews have stated. That said, a new version of the Flybook will be available soon that utilises the faster EDGE data standard. 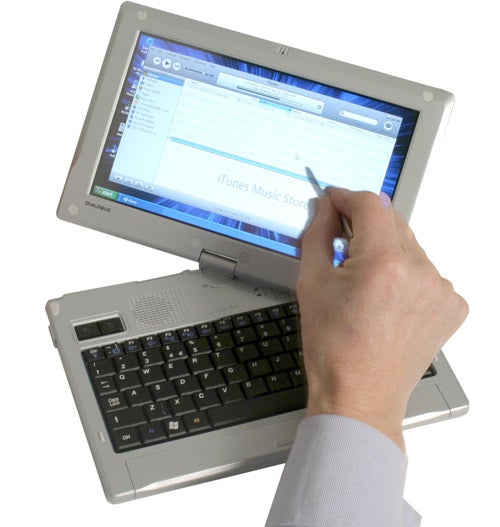 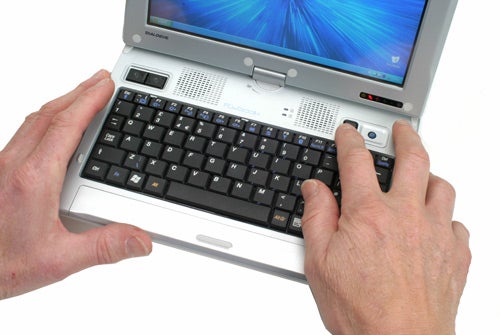 Price wise this particular spec of Flybook will set you back £1399 including VAT. Now, it’s a fair rule of thumb that the smaller and lighter a notebook is, the more it costs. To be fair though, the Flybook doesn’t appear to be excessively expensive, but you have to remember that the spec is pretty modest compared to other ultra-portable notebooks, and you’re not getting an optical drive in the bargain.


On the surface the Flybook looks like a very attractive ultra-portable notebook with more wireless connection options than you could shake a stick at. But dig a little deeper and the Flybook doesn’t stand up so well to the competition. Yes, the Flybook only weighs 1.23kg, but then the Sony VAIO TX2XP only weighs 1.25kg – then consider that the Sony will give you over seven hours of battery life, while the Flybook can only muster around a third of that. 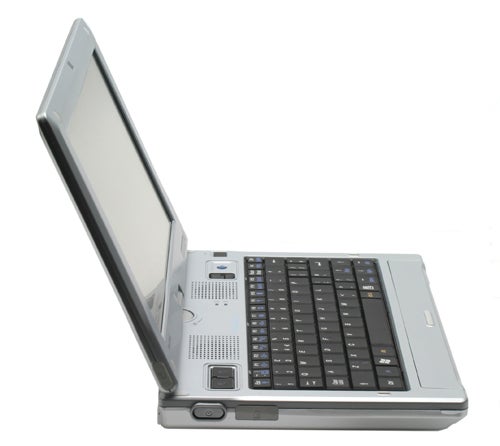 But what about the Flybook’s integrated wireless WAN feature? I hear you say. The problem here is that a whole host of notebook manufacturers have announced models with integrated 3G support – that means that even the forthcoming revised Flybook with EDGE support won’t be able to keep up. Add to this the fact that this new breed of 3G enabled notebooks will make use of the new high-speed HSDPA standard, and the Flybook starts to look rather under specified.


Perhaps if I had reviewed the Flybook when it first hit the streets I may have been more impressed, but things have moved on a great deal since then. There are dual core mobile processors, integrated 3G modules and some killer designs on offer, all of which add up to make life very hard for the Flybook. I’m keen to see whether Dialogue will rise to this challenge and evolve the Flybook accordingly, but as things stand it looks like this little notebook may be swept aside with the wave of new technology.