The Devolo WiFi Repeater+ ac is the company’s latest extender for Wi-Fi 5 networks. A dual-band design, with an innovative cross-band repeating option, it promises to maximise performance by using both the 2.4GHz and 5GHz frequency bands at once. The Repeater+ ac also supports MU-MIMO and features two Ethernet ports for wired devices, along with a pass-through mains socket at the front. It's a convenient way to extend your home network then – but its £70 price is fairly high by dual-band standards, and while we found it did give our network a boost, there are cheaper alternatives that offer similar performance.

Like all repeaters, the Devolo WiFi Repeater+ ac aims to improve wireless performance in areas of your home that get only a weak signal from the router. This particular model supports Wi-Fi 5, so it won’t be able to match the top speeds of Wi-Fi 6 gear, and its dual-band design doesn’t offer as much bandwidth as a tri-band model.

Those aren’t reasons to write it off, however. If you simply want to extend the reach and speed of your wireless network, the Repeater+ ac can give you the boost you need with minimum fuss.

The Repeater+ ac is quite a boxy device – and at 115mm wide, it may obstruct the neighbouring mains socket. Devolo makes up for this in part by building a pass-through socket into the front. At the top of the Repeater+ you’ll also find not one, but two Ethernet ports. This is certainly convenient, but it’s a shame that they’re limited to 100Mbits/sec, since the wireless connection could easily support higher speeds. 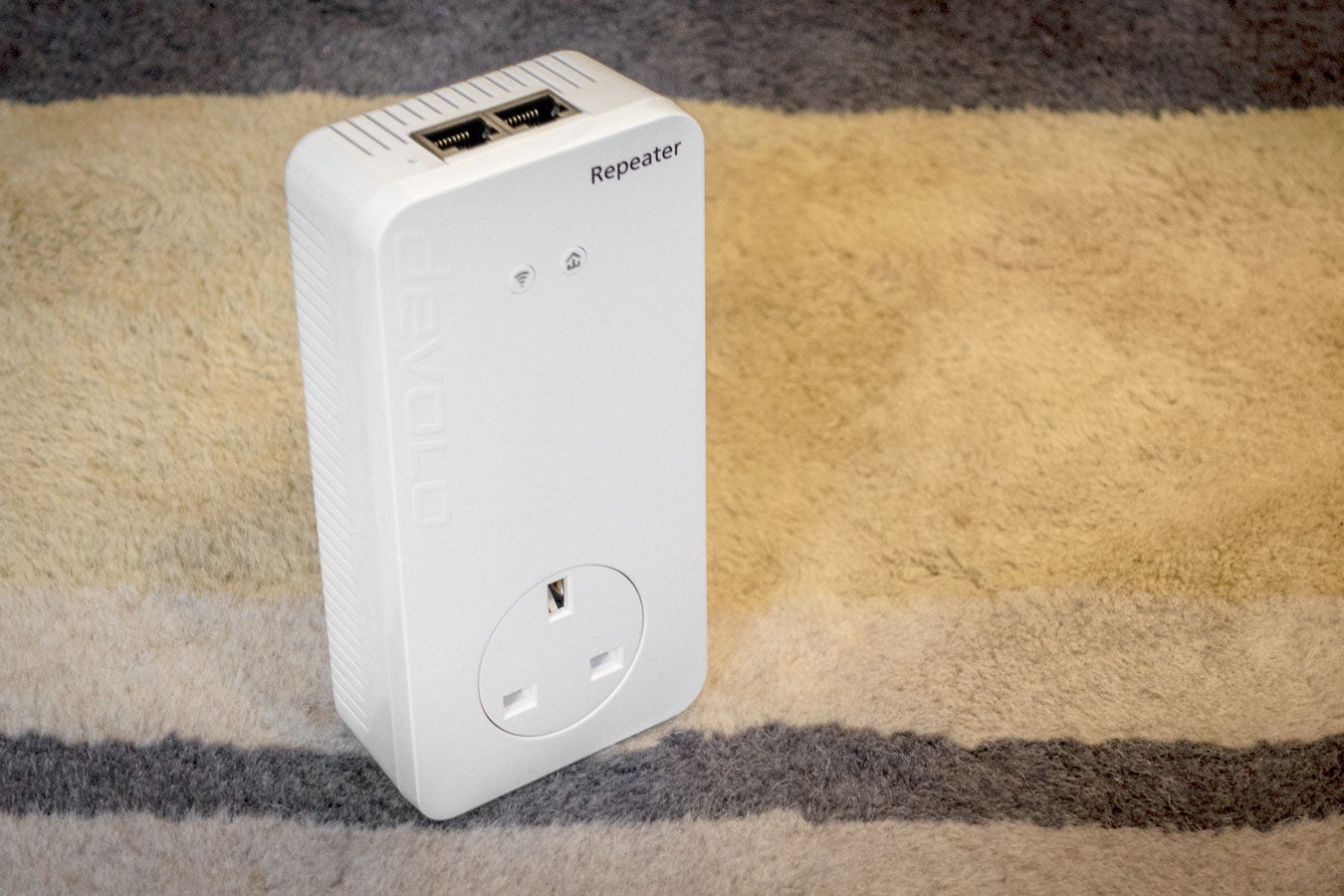 At the front, two little buttons glow red or white to show connection status. You can push one to initiate a WPS connection (although WPS isn’t supported on networks using WPA3 security), while the other turns the Wi-Fi signal off and on. I didn’t find this arrangement entirely intuitive, but neither is it a disaster.

When you first set up the Repeater+ ac, it takes on the same name and passphrase as your main network. As such, you can set up with almost zero configuration, with your mobile devices able to switch transparently between the two. If you prefer, you can use the web portal to customise the network name and password, and optionally split up the 2.4GHz and 5GHz radio bands into separate networks. It’s also possible to switch between regular in-band repeating and cross-band, which dedicates one radio band to client connections and uses the other for the connection back to your router.

Add multiple repeaters to form a mesh network, complete with seamless roaming to push connecting devices to the strongest connector. And, you can use one of the Ethernet ports to wire the extender into your router and use it as an access point, which could be useful for running Wi-Fi further away – to an outbuilding, for example.

Those looking for parental controls or a guest network might be disappointed: these functions are only available if you run a cable from your router to the Repeater+ ac and use it in Access Point mode. However, you can set the network to turn off and on according to a custom schedule, and optionally turn off WPS for extra security. 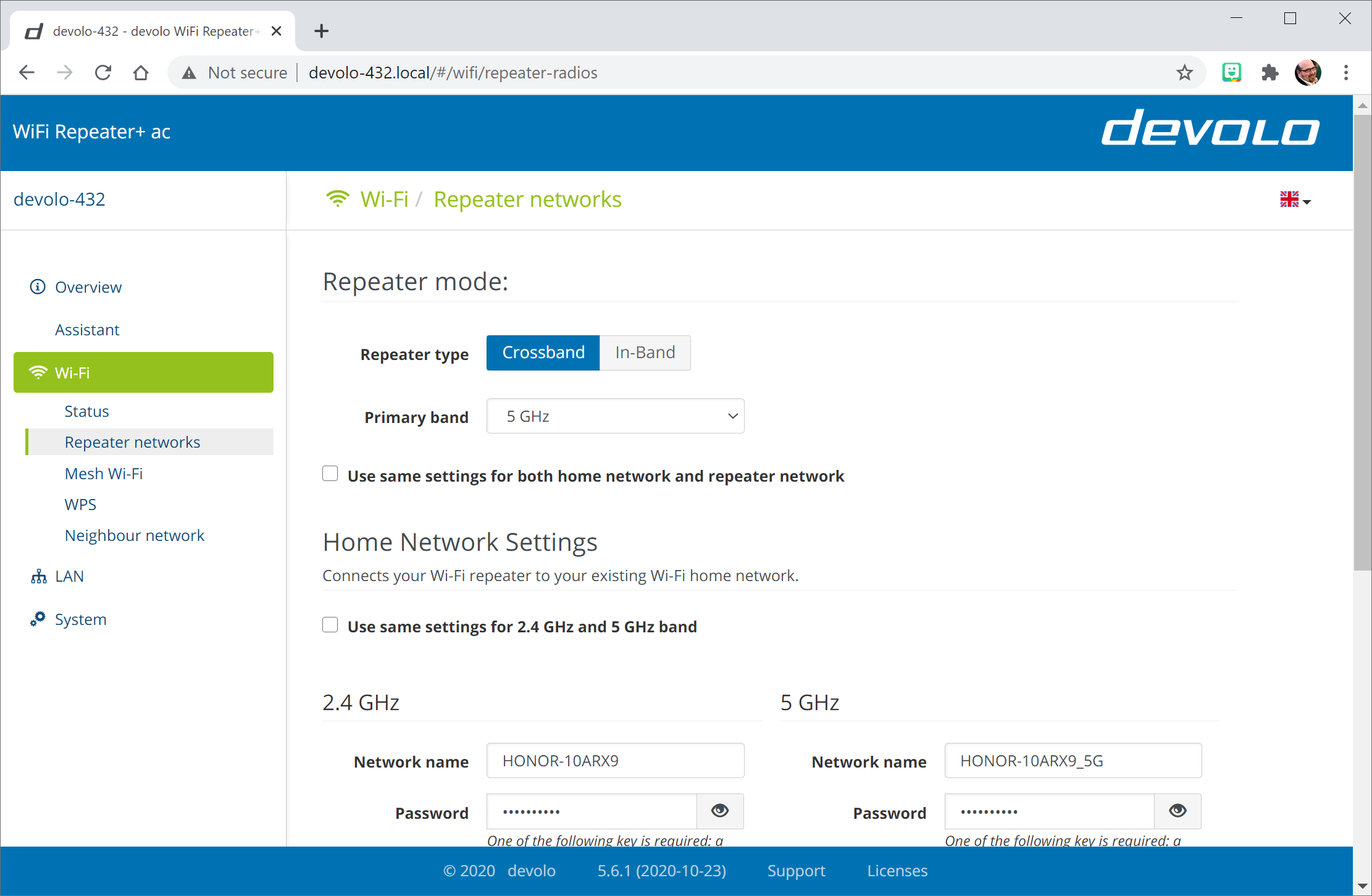 Cross-band repeating is an intriguing proposition. Most dual-band repeaters use the fast 5GHz radio band to connect both to clients and to the router, but this eats into your available bandwidth. Devolo’s idea of using the 2.4GHz radio to lighten the load seems like a good one, and I was eager to put it to the test.

I did this in my usual way, first installing the Repeater+ ac in my central hallway, then wandering around the house with a laptop running TamoSoft’s free Throughput Test tool to measure speeds.

I found that the Repeater+ ac gave a clear boost to the wireless signal. On the terrace at the rear of my home I’d been seeing average download speeds of 94.3Mbits/sec when connected directly to my router; Via the repeater this shot up to 165.1Mbits/sec.

While these are good scores, they’re not a slam-dunk for the cross-band approach. Indeed, switching to 5GHz in-band repeating made little difference, slightly raising some speeds while lowering others.

Should you buy the Devolo WiFi Repeater+ ac?

One definite point in the Repeater+ ac’s favour is that it supports MU-MIMO, so your connection should remain speedy and smooth even when lots of clients want to connect at once. However, there’s no getting away from the fact that the TP-Link RE365 achieved similar performance for £25 less – which makes it hard to recommend the WiFi Repeater+ ac at its current price.