Computers have been around long enough that even modest households have more than one machine in residence. In most cases, these extra systems are hand me downs which really show their age when it comes to gaming but are fine for casual Internet use and word processing. Of course, without an Internet connection these machines are close to useless – yes we really are that dependant on the Web these days.


For most home users, laying down metres of CAT5 cable is not the most practical method of sharing an Internet connection, especially if you live in rented property or you have a habit of moving properties on a regular basis. Also, unless you are doing lots of file transfers across the network, it’s a little overkill.


Increasingly, the most common solution to this problem is wireless networking. In theory, it’s a no-nonsense, no mess solution. Unlike our friends in America however, European homes can date back hundreds of years which often means hugely thick walls and a general structure that just doesn’t lend itself to wireless particularly easily at all. 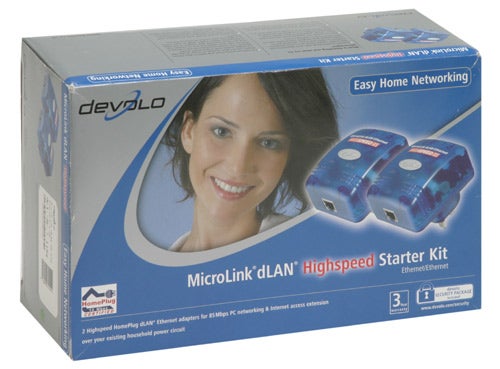 Thanks to Devolo, there is now another solution! The MicroLink dLAN networking system uses the pre-existing electrical wiring in your house to piggy-back an Ethernet signal, much in the same way X10 works. The upchuck of this, is that anywhere there is a mains outlet, there is the option of plugging in a MicroLink adapter and connecting to your network. If used in conjunction with a router, an Internet connection can also be shared across your power lines.


This is the second generation of the dLAN kit, rated at a theoretical 85Mbit/sec which is a major improvement over the 14Mbit/sec previous generation products. This means performance should lie somewhere in between that of a 54Mbit/sec wireless solution and a 100Mbit/sec LAN. Experience dictates there is often a large difference between theory and practice though.

The devices are as simple as they come, just a small module about the size of a phone charger with an RJ45 socket at the bottom. Linux lovers will be pleased to know that because this is a purely hardware solution, it is OS independent.


We took one of the modules and plugged it into a socket near our main router and connected an Ethernet cable. We tried using a straight cable and a crossover cable and it was intelligent enough to work this out and accommodate both. We then plugged the second module into a different power point and ran a standard Ethernet cable to a notebook. The laptop acted in much the same way as if it had been plugged into a switch and within seconds I was browsing the Internet. No fiddly set up needed at all! If you want to – by using the install CD, you can set up a password to encrypt data and stop people from adding unauthorised modules to your network. 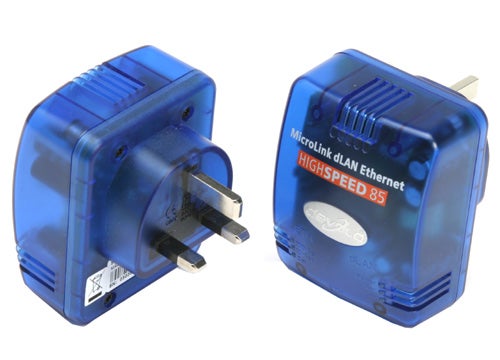 To test this system, we used two Centrino based notebooks and a Buffalo Airstation G54, which is a combined switch and wireless access point. We then used the opensource tool Iometer to measure performance in several different scenarios.


The first scenario was with both computers cabled to the 100Mbit/sec switch using the onboard network adapters. This gave a throughput of around 11.5MB/sec which is 92Mbit/sec – very close to its theoretical maximum.


The second scenario was with one notebook cabled to the switch and the other connected wirelessly. When a foot away from the access point we had a throughput of around 4.25MB/sec which is 34Mbit/sec. This is quite a bit lower than the stated 54Mbit/sec and that’s when it’s nearby! We then moved the notebook around 15m away, behind another wall, which is a common scenario and if anything considered close in wireless terms. Although the signal was still reported as strong, throughput dropped to only 1.70MB/sec which equates to a lowly 13.6Mbit/sec.


Finally, we took the dLAN modules. One notebook was wired directly to the switch. We then took a cable from the switch to the dLAN module and plugged it in to the nearest mains socket. Our notebook was then plugged into another electrical outlet. Transfer was 3.75MB/sec which equates to 30Mbit/sec. This is still a fairly good result and near to that of close range wireless, but no where near the stated 85Mbit/sec. When compared to wireless at a distance (which is more than likely the way most users will implement it) that this solution really shines. The loss in speed is no where near as drastic over the power lines and you don’t have the other associated issues with wireless networks.


Performance is a little lower than we would have expected and is certainly not out to replace traditional cabling, but the Devolo MicroLink dLAN does offer the same reliability of transfer. There are also no issues of reception and it can in theory travel up to 200m, which is pretty much any power outlet in your house.


Add to this the fact that you’re not going to have to muck about with MAC address filtering, hiding your SSID or go through the trials and tribulations of WEP and WPA keys, and it’s clear that this will be an attractive proposition for the non-techie home user.


We think this is a wonderful piece of technology that is incredibly simple to use. For a lot of people this will be worth considering as an alternative to wireless or tiresome cabling. The real down side is the cost – at £122.78 including VAT you are paying extra for the convenience factor.