The Devolo Magic 2 WiFi next is one of the slickest Powerline-based extenders around. It’s effortless to install and delivers both wired and wireless network connections to areas that would otherwise be entirely out of range. Powerline technology comes with a catch, though: there’s no way to predict the speeds you’ll get before you splash the cash. The Magic 2 WiFi next isn’t cheap, either. Still, if you need to extend your signal to an attic or garage that’s beyond the reach of a regular router, the Magic 2 is an attractively fuss-free solution. Just remember: for everyday domestic use, there are cheaper options that may work just as well.

Most Wi-Fi extenders work by retransmitting the radio signal from your router. This is fine, but if your house is large or has thick stone walls then you might need to take a different approach. The Devolo Magic 2 WiFi next sends data over your mains electricity circuit, rather than through the air. Simply plug the access point into any power socket in your home and it will start broadcasting a dual-band 802.11ac Wi-Fi signal, which connects back to your router. It’s an ingenious approach – but is it worth the steep asking price?

The Magic 2 WiFi next kit comprises two chunky white plug adaptors. The smaller one plugs into a socket near your router, and connects to it via an Ethernet cable. The other can be installed wherever you want, as long as it’s on the same mains circuit. If you’ve paid £270 for the multi-room kit, you’ll also get a second AP that you can place in a different room; it will work just like the first one.

With multiple access points the system forms a mesh network, with all the features you’d expect – including seamless roaming, where devices are pushed to connect to the access point that’s providing the strongest signal at that particular time. 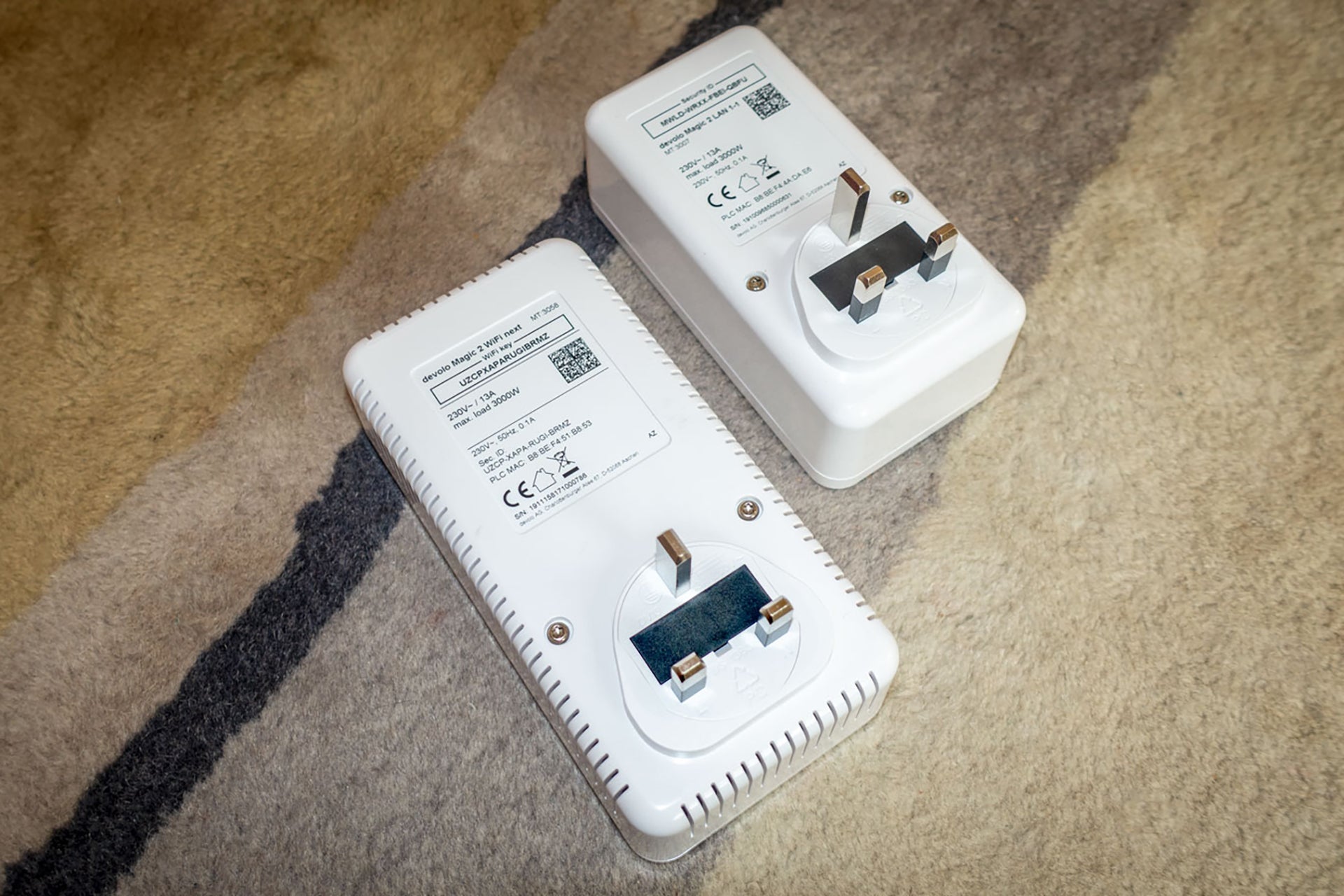 All the units automatically detect each other and negotiate a securely encrypted connection, so if you’re happy to use the default name and password for your new extended network, there’s no configuration required at all.

You may, however, prefer to set the Devolo network to use the same SSID and password as the router, since this will enable your devices to automatically switch to whichever network is strongest as you move around the house. This is as simple as activating WPS on your router, then tapping the Home button on the front of the AP to synchronise the connection settings.

If you do want to dig into the technical settings, the AP offers a web portal where you can optionally split the 2.4GHz and 5GHz bands into two separate networks (they’re combined into one by default), enable an isolated guest network, set up parental controls to block network access to specific devices between certain times, and tweak other options. 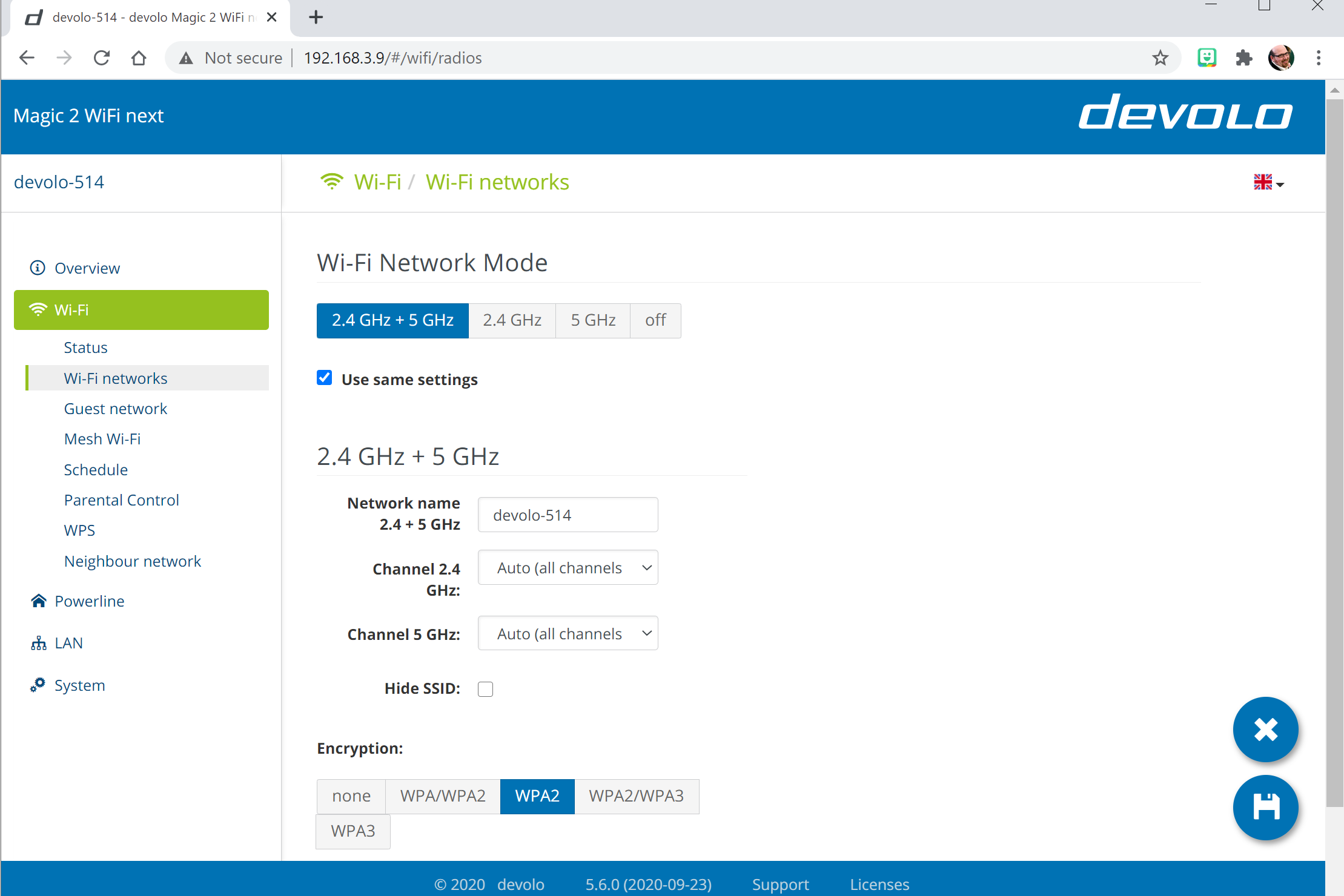 In addition to wireless services, the AP unit also offers two Gigabit Ethernet connectors. You shouldn’t expect these to run at full Gigabit speeds, as I’ll discuss below, but they provide a convenient way to get the best performance out of your Powerline connection, or to hook up wired-only devices such as printers and storage appliances.

The Magic 2 WiFi next claims connection speeds up to a theoretical maximum of 2400Mbps over Powerline, but real-world performance will depend on the state of your electrical wiring and the length of the run. You can use Devolo’s free Cockpit app to check your actual connection speed: with the two units plugged in at opposite ends of my home, I saw data rates fluctuate between around 400Mbits/sec and 750Mbits/sec. 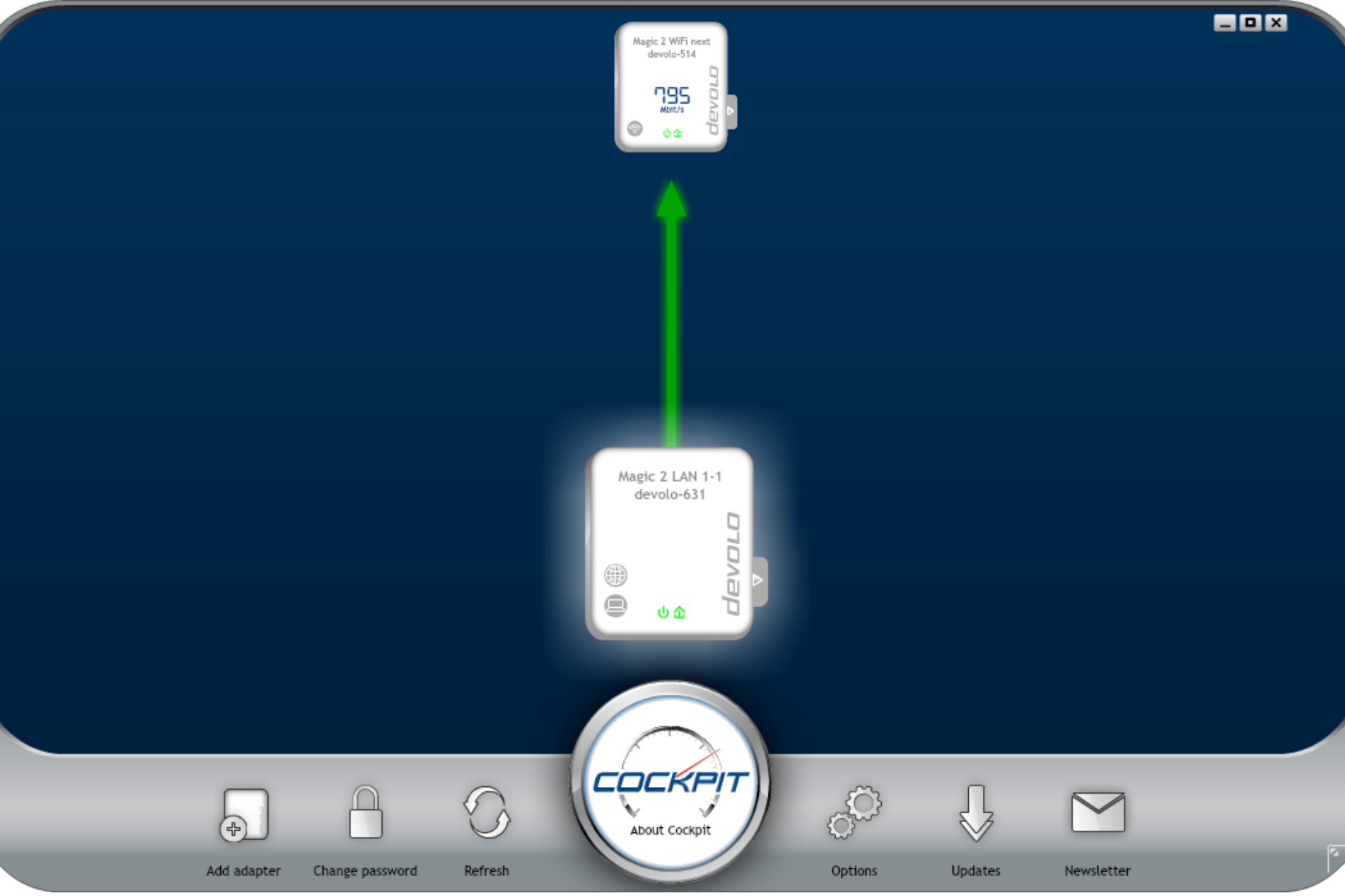 The Powerline speed is just the connection between the devices. Connecting via Wi-Fi reduces the speed further, with the kit supporting Wi-Fi 5 at a maximum throughput of 867Mbps on the 5GHz band and 300Mbps on the 2.4GHz band. I tested this by carrying a laptop out onto the terrace at the rear of my house, and using TamoSoft’s free Throughput Test tool to measure the average connection speed from the Magic 2 back to the router over a 60-second period. On a 5GHz link, my upload and download speeds were 79.1Mbits/sec and 78.3Mbits/sec respectively.

By contrast, when connecting directly to my router’s own network, I saw 96.4Mbits/sec and 127Mbits/sec speeds. That’s right: far from boosting speeds, the Powerline connection proved slower than a long-range wireless connection, and I saw similar results in the upstairs bedroom.

This doesn’t necessarily mean the Devolo Magic 2 WiFi next is a failure, though. I finished my testing by measuring connection speeds in the bathroom at the back of the building. The wireless signal in this room is normally very poor, as the plumbing plays havoc with radio transmissions – but in the bathroom, the stronger signal from the Devolo extender proved transformational. It gave me upstream and downstream speeds of 83.7Mbits and 86.5Mbits/sec, while the router alone struggled along at 12.4Mbits/sec and 37.8Mbits/sec respectively.

Should you buy the Devolo Magic 2 WiFi next?

The conclusion is clear: if you just want a general signal boost around your home, a cheaper wireless repeater might work better. However, while Powerline technology can be sluggish, it’s a great way to work around physical obstacles. The Devolo Magic 2 WiFi next also offers a good range of advanced settings, putting you in full control of your wireless network – so if you need to get a signal to a really stubborn notspot, it’s an attractive choice.