What is the Devolo Home Control Starter Pack?

The Devolo Home Control Starter Pack contains a smart hub, a door/window sensor and smart plug. It’s everything you need to make your home smart in one box. This base kit has lots of room for expansion and will allow you to control other smart home devices from Devolo or most Z-Wave compatible ones.

Setting up the hub is straightforward. Plug it in and either connect it to your router via an Ethernet cable or to the powerline (D-link, TP Link etc) network in your house. Sadly, the Devolo home control hub doesn’t support Wi-Fi.

Once the hub is connected to the internet, simply go to www.mydevolo.com/en and set up an account. The website will detect the Devolo Smart Control Hub in your home, just requiring you to press a button on the unit to confirm it’s your one.

With the hub up and running, it’s time to install the individual devices, and the additional ones that we had got our hands on.

You install them through the website. Short videos on the website offer step-by-step guidance on how to set up each unit. These instructions are clear, concise and helpful – unlike those supplied on paper in the box.

As you install the devices, you name them and specify the room in which they’re to make organising them easier.  The Devolo uses Z-Wave to communicate between devices, meaning that each device also acts a signal booster for the network. It’s a clever feature of the protocol and with a bit of careful positioning, it’s easy to achieve complete coverage of large house or one with thick walls. 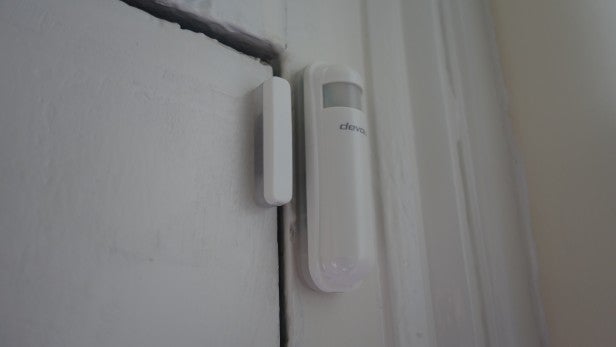 The basic pack comes with a door sensor and a smart plug. To install the door sensor, simply remove a little tab to connect the battery – and wake up the unit – when instructed to do so by the control panel.

Then you glue – or screw – it to the frame of your door or window. The sensor uses the magnet to determine if the door has been opened, so the magnet too will need to be attached to the door.  The magnet needs to be placed within a couple of centimetres of the sensor when the door is closed.

Interestingly, this unit also has features sensors for temperature and brightness. It comes with a bunch of spare adhesive strips in case you change your mind about placement and decide to position it elsewhere.

Since the software records each trigger for use, it’s quite handy for keeping an eye on what’s going on in your home when you’re absent.

Also included in the starter kit is a smart plug, so you can turn things on and off remotely and monitor energy usage. Again, setup is a doddle: just plug it in when instructed.

From then on you can remotely turn devices on and off using the control panel. It’s useful for lights, electric heaters and slow cookers, but most other modern appliances will require human intervention before they can be powered up.

It’s great for lamps, though – the response to turning it on or off is almost instant. 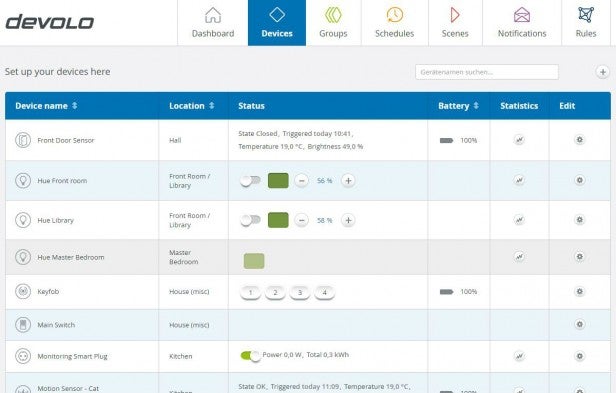 With the basic setup you can turn the plug on and off and the door/window sensor will provide you with notification on when it was triggered, along with the temperature and light levels. But the Devolo home control software enables you to do far more complicated things with your new smart home.

You can organise devices into groups, so they work together. So if you have a collection of smart plugs on some lamps in a room, you can make them all turn on or off at the same time.

Schedules let you automate the timings – for example, turn on lights when it gets dark. The control panel uses a super-clear drag-and-drop interface.

Scenes let you combine a few different items into one handy group, which can be triggered by something else. Say you wanted the front room to be cosy of an evening, you could dim the lights and increase the temperature on the radiators at the same time.

Rules are the most fun; they enable you to use If and And statements to create specific rules. For example, if a door opens and it’s after 8pm, turn on the hall lights.

Devolo also makes a range of accessories that work with the hub, and it’s when used alongside these extras that the Home Control Hub really shines. 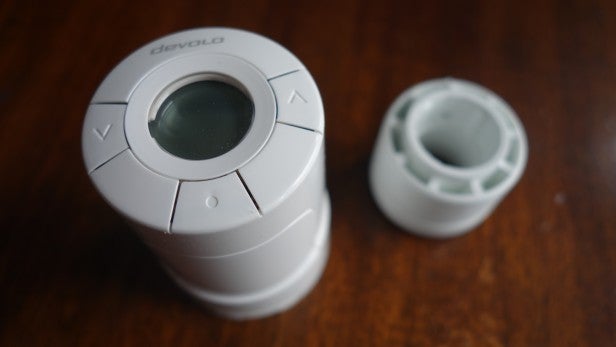 The video instructions for the radiator thermostat are slightly more complicated, because you have to take off the current temperature dial and replace it with another unit. I was a little apprehensive, given that previous attempts at amateur plumbing hadn’t been particularly successful. But the old temperature gauge came off easily, after which I used one of the adapters to fit the new unit to the radiator.

To notify the control panel to look for a new device, simply press the button on the thermostat briefly and it will join the network. It’s very clever. Being able to set a different temperature in each room, rather than simply a general house level, is super-handy. Adjusting to the desired temperature can be done via the dial or through the home control software.

The only issue is that each of these units cost around £60, and in order to get them to work properly in a home, you’ll need one on every radiator. That will ramp the price right up. This is a shame, since these are easily the best part of the kit.

I’m still tempted, though, especially since it’s possible to set rooms that you don’t often use to a cooler temperature. This would be brilliant combined with Hive or Nest. It is possible to spread the cost by buying units individually; I suspect I’ll do that over time.

This lets you set an ideal temperature for an area. It could be a room that has a few radiators, an entire floor of your house, or even just an electric heater (using the smart plug) that turns off the unit when room is warm enough. 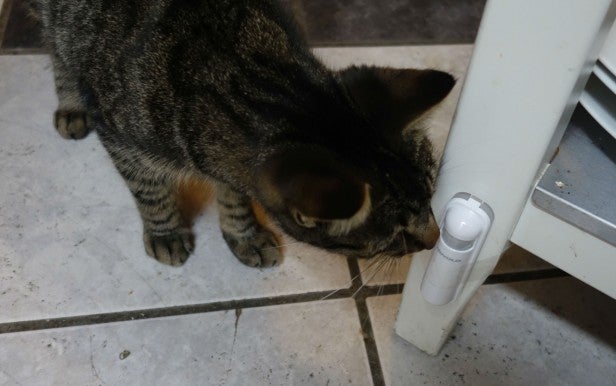 The motion sensor looks similar to the door sensor but instead it will fire off when it senses movement, as well as reporting on temperature and light levels. It’s sensitive enough to pick up a cat walking past if you mount it low enough, which is great if you want to get live updates on how often the cat flap is being used. Since installing this I’ve learned that my cat is a slacker who doesn’t go outside in the middle of the day. 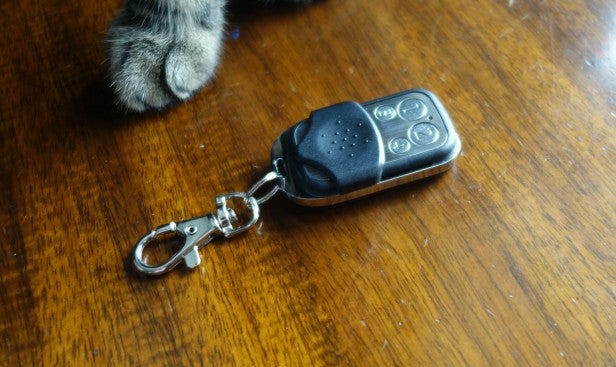 This is a tiny portable set of four programmable buttons on a keychain. Setup involves waving it in the direction of the hub, after which you can program it to do whatever you want. The buttons can be set to activate individual devices or activate entire scenes.

The wall switch is a giant version of the key fob. It can either be one big switch with two triggers (up and down) or two switches with four triggers (up and down for each button). You just glue it wherever you want there to be a switch. You could just use it for a light switch or set it up to turn on lights in a bathroom and warm it up before you use it.

Devolo will talk happily with Philips Hue. When adding a device, select Hue and it will quickly connect and then detect all your lights. Which means Hue can be part of your rules and scenes. They also support anything with a website, or any Z-Wave devices. 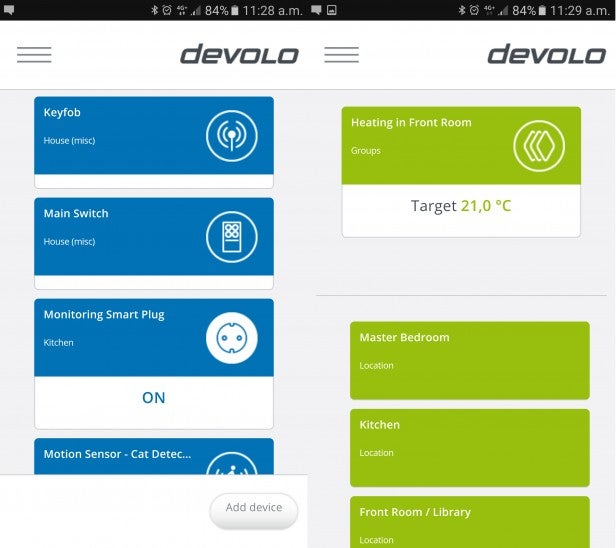 The My Devolo app

I experienced a few issues with the app (tested on Android and iOS). It loads up a mobile version of the website, but the limitation of the screen size means that doing complicated tasks can be a pain, but for switching things on or off it is fine. Thankfully, there is a “full version”, which takes you to a non-mobile version of the site that offers total control.

Things we’ve used the Devolo Home Control Hub to do that are actually useful:

Should I buy the Devolo home control starter pack?

The Devolo Smart hub is a good introduction into the world of smart homes. The interface is really well done, especially for creating rules and adjusting the behaviour of your devices.

The sensors are all fine (there is not a lot between them as most brands use the same supplier) but you will be paying the price for technology that’s not mass market yet. That’s true with all smart home technology.

Hive’s range of smart home technology is becoming broader all the time and MiHome are releasing smart sockets (plug sockets that are already smart) which will appeal to people who have plans to completely renovate their home into a smart one.

However, Devolo still lead the way in ease of use and installation and they have plans for far more devices in the future. This is a good package – although you’ll have to pay more for extra components to make it really great.

If you’ve already got a D-link network or any other powerline network in your house, then it’s the obvious choice. Aside from that it’s down to personal taste for interfaces and the Devolo one is good.