Is poor Wi-Fi in your home making you wail? Are you having an Ethernet emergency? This Devolo starter kit is designed to solve both problems in one fell swoop, by creating a home network using the mains electricity cabling in your home.

While wireless connections are getting better and better, going wired is still necessary in some cases. Your router’s wireless signal simply may not extend to the loft or basement where your den or home office is located, and you probably don’t want to have to rip up the floorboards to lay Ethernet down.

This is where Powerline comes to the rescue. It’s one of those brilliant ideas that can really make your life easier. Just plug an adaptor into a socket near your router and then connect to it via Ethernet. You can then plug an adaptor into each mains socket anywhere around the house, and, as long as it’s on the same electrical ring circuit, you have a network.

Just plug your device, be it desktop, laptop console or printer, into that adaptor and you’re all set. What’s more, the Devolo can create its own Wi-Fi hotspot, so you can connect up your wireless devices too.

As far as Powerline features go, the Devolo is the crème de la crème. It claims to offer speeds up to 1,200Mbps – faster than Gigabit Ethernet – and maintain performance at a greater range than previous power versions too. Devolo says this is down to its ‘range+’ technology, which uses all three wires in a power circuit, while maintaining the full earth wire for protection.

The second adaptor features two Gigabit LAN connections so you can have two devices hooked up to it at the same time, such as a smart TV and a games console, ensuring you don’t have to worry about dropped connections when streaming video and playing games online.

In addition, the second adaptor features its own built-in wireless hotspot. Therefore, as well as wired reliability, you can also connect all your wireless devices, such as smartphones and tablets too. And as it has AC Wi-Fi, and is equipped with four antennas, it promises up to 1,200Mbps. It can operate at 2.4GHz at the same time too, ensuring compatibility with older devices.

The adaptors feature ‘Wi-Fi Move’ technology, which enables you to clone your existing Wi-Fi SSID and password to the device, so you don’t have to manually connect your wireless devices to a separate network when you move into range of the adaptors.

To manage this Devolo supplies an attractive Devolo Cockpit app and web interface to manage the devices. Using this you can activate the Wi-Fi Move, choose between 2.4GHz and 5GHz Wi-Fi, and update the firmware should a newer version be available. 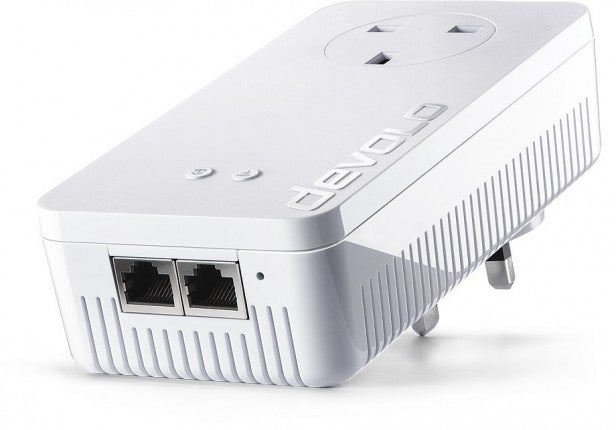 On top of all of this, each adaptor features a pass-through power socket so you don’t have to worry about losing the use of a socket. The adaptor also features a mains filter so any connected devices won’t interfere with the networking signal.

The downside of including all of this good stuff is that the adaptors are quite bulky, so if you’re looking for something discreet this isn’t it.

That aside, it’s as if they’ve thought of everything. But can it deliver?

These devices are billed as plug-and-play and that’s exactly how it proved. There are two lights on the second adapter – one that indicates the network is operating and the other that shows the Wi-Fi is active.

Once connected, both those lights light up and the laptop I connected had an IP address in a matter of seconds.

Joining the Wi-Fi network required entering the security ID printed on the devices themselves. I took a photo of it first, as you can’t see it once the device is plugged in. It’s quite long so takes a while to enter, but you can change it via the software.

You can also clone your existing network and this worked as advertised. If you wish to reset and return to the default network you can do so via a reset button located next to the Ethernet sockets, and accessed via a paper clip. 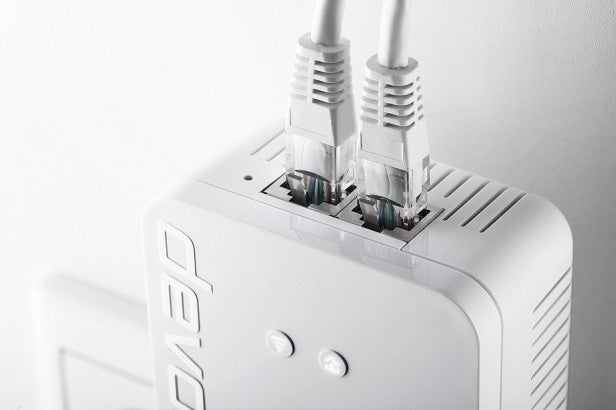 With its comprehensive list of technologies we were expecting big things from the Devolo. We copied our test 1.22GB file from a NAS server across the network to an SSD-equipped Macbook Pro in 95 seconds, equating to 13.3MB/s. This impressed initially, until I realized that it’s not as fast as the speeds we’ve seen in the nominally slower Devolo dLAN 650 triple+ adaptors reviewed before, albeit tested in another location.

Performance is good then, but not the best, which is disappointing. This could simply be down to the quality of the electrical circuit in the test enviroment, but that’s the nature of Powerline – performance can be variable.

I then tested the Devolo’s Wi-Fi speed and achieved a reasonable 8.2MB/s, significantly better than the average 3.29MB/s seen from 802.11n-based Wi-Fi equipped Powerline. However, for comparison I performed the test using the router’s 802.11ac connection directly to the laptop and achieved 40.6MB/s, which betters both the wired and wireless performance from the Devolo. 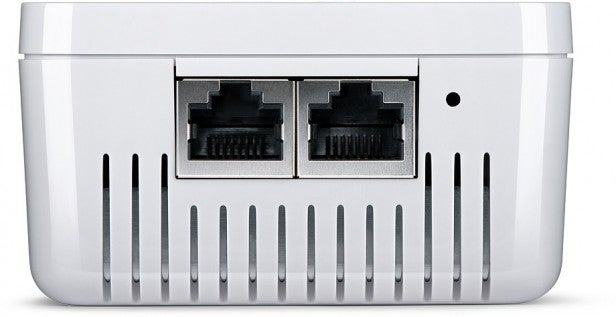 Should I buy the Devolo 1200+ WiFi ac Starter Kit?

This Devolo kit looks to have everything you could want right now from Powerline networking. It sports twin Ethernet output, AC Wi-Fi hotspot, pass-through power sockets and good performance. But the latter is where it falls down a little. At £159.99 it’s a pricey piece of kit so you’re paying a premium.

This would be justified if we’d we seen record performance, but in our tests we just didn’t. The kit certainly won’t let you down, and your mileage may vary, but unless you’re happy to splash the cash knowing you have a clean, interference-free electric ring, I’d recommend going for the lower-cost Devolo dLAN 650 triple+.

A very good package that ticks all the boxes for Powerline technology thanks to the inclusion of twin Ethernet output, AC Wi-Fi and pass-through power sockets. It’s just let down by performance that isn’t outstanding enough to justify the high cost.