Born out of a scheme to create a next-generation Resident Evil at a time when next-generation meant PS2, Devil May Cry took three games before Capcom got the formula right. Being well over the age of fifteen, I’ve always regarded Devil May Cry 3 as a bit of a guilty pleasure: a hyper-pumped, rocked-out devil hunting adventure that got more enthralling the less serious it took itself. There’s something endearingly silly about the series’ obsession with the gothic and the gory, not to mention Capcom’s enduring school-boy obsession with the more pneumatic areas of the female form. Even though DMC3 was a bit of a hardcore gamer’s game, I couldn’t help but love it. 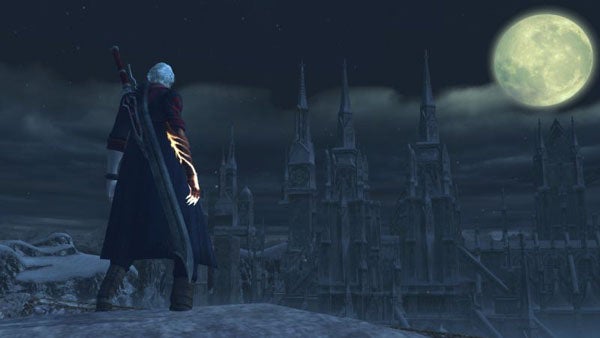 Maybe that’s why I’m equal parts disappointed and relieved to find that Devil May Cry 4 is very much in the same grain. Despite a change of protagonist, this isn’t an attempt to grow up, broaden out or redefine the franchise – it’s basically an attempt to do a slightly more friendly version of Devil May Cry 3 with sparkling HD graphics, a grander scale and a few well considered tweaks. If you were looking for a riposte to Sony’s God of War then you may be upset at the lack of progress. If you just want a game that rocks, you’ll mostly be delighted. 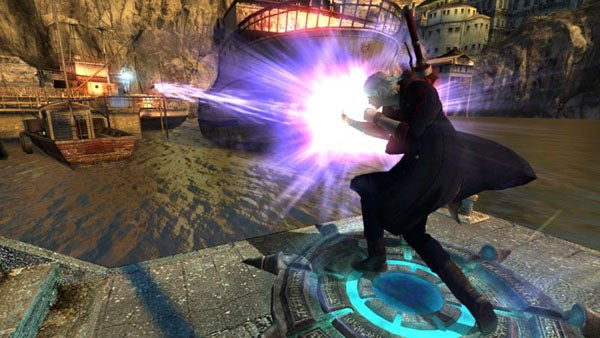 At first, the new stuff may be unsettling. Our old hero, Dante, spends the first half of the game as one of Capcom’s ambiguous anti-heroes, actually squaring up to our new hero, Nero, on several occasions. Like Dante, Nero has the blood of the traitor demon, Sparda, running in his veins and – also like Dante – he has a fondness for long leather coats, dubious hair styles, large calibre handguns and magic swords. The different selectable fighting styles of DMC3 seem to have gone out of the window, but in their place Nero has a new toy: a demon arm he can magically extend to grapple foes and generally smack them into the nearest hard surface. Throw in another ability – the power to lock onto blue glowing objects or targeted enemies and use the arm to drag Nero towards them – and it seems like Capcom has different plans for the series this time around. 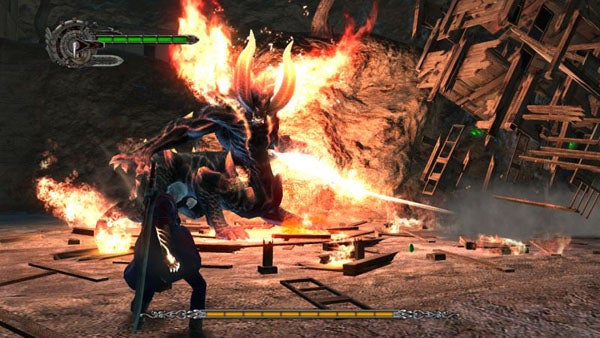 Yet within a few hours it’s clear that we’re still in the same well-trodden territory. Basically, Nero roams through a series of environments solving fairly simple puzzles and battling demons with his sword and pistol. You start off with a selection of basic slashes and swipes, introduced by (shock!) a tutorial section, but develop a bigger selection of combos and enhanced capabilities by collecting demon souls, while harvesting bloody red globules of demon essence with which you can splash out on health packs (here stars) and other upgrades. 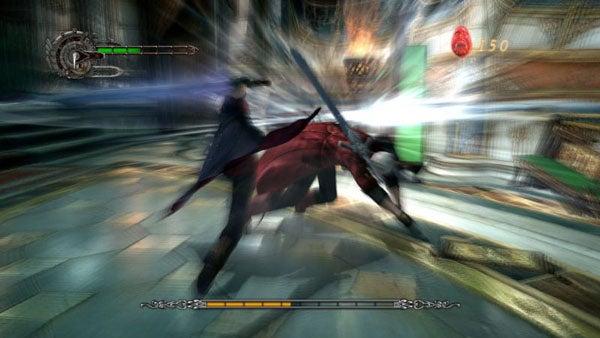 The puzzles are frequently pitifully easy – to the extent that the game practically dishes out the solution in only slightly cryptic notes for the terminally thick – and the real challenge comes in mastering Nero’s combat skills and slaughtering hostile demons in the most efficient and stylish way possible. At the end of most chapters there’s a boss, differing from the vast majority of Capcom’s bosses in that a) they’re not ludicrously difficult and b) it won’t take you the better part of an hour to work out which ridiculous sequence of actions will bring them down. 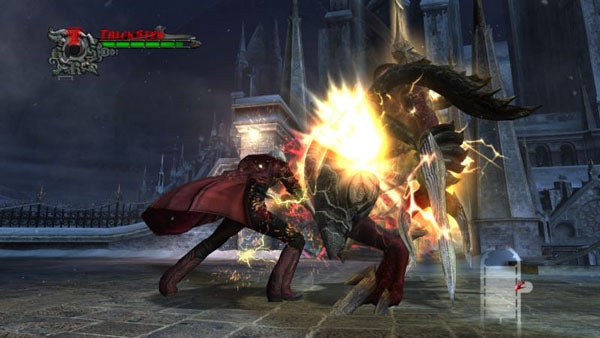 In fact, being sensible about the difficulty level is one of DMC4’s biggest strengths. Don’t worry, hardcore Dante worshippers, you can still play the game through on the tricky Devil Hunter mode, and even unlock harder modes above that. If, however, you just want to enjoy the ride you can select the Human mode – without any hint of humiliation – right from the start. You can even set certain game mechanics, including combos and skill upgrades, to be handled intelligently by the game itself. The result? The first truly accessible Devil May Cry. 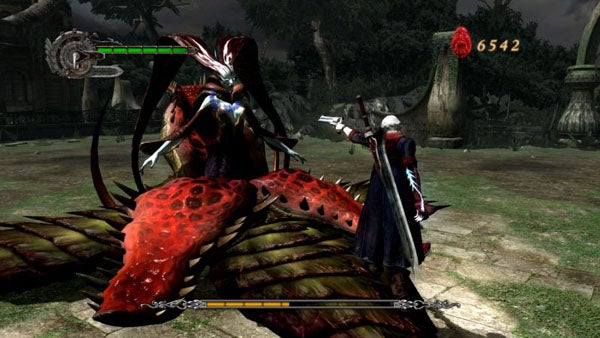 Now, there are two good reasons why you might want just to enjoy the ride. Firstly, you’re guaranteed to like the views. DMC4 is a seriously gorgeous game. The architecture is a little less dark and gaudiesque this time around, but there’s plenty of gothic splendour to enjoy, and as Capcom has combined some stunningly crisp and detailed textures with a superb, deliberately over-egged HDR lighting system, you can actually see the epic scenery in all its glory. Character and monster design and animation is up to Capcom’s traditional high standards, and the bosses are – once again – brilliantly conceived and executed. This is exactly what you’d expect from a next-generation Devil May Cry; it hasn’t got the clutter, the gritty detail or the realistic touches of an Uncharted or a Gears of War, nor has it got the expressive human animation of (again) an Uncharted or a Heavenly Sword. What it does have is scale, colour, contrast, definition and imagination. Personally, I think it looks pretty damn good. 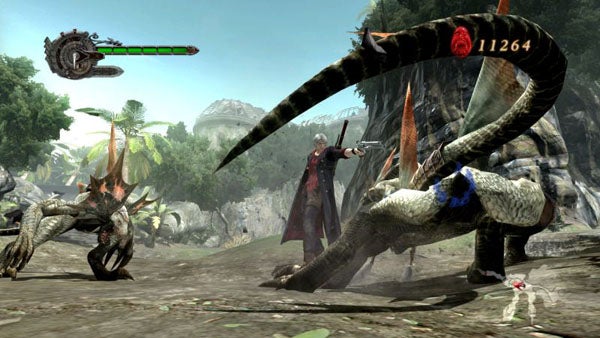 Secondly, DMC4 is unashamed, old-school console fun of the sort we used to get before every designer started to worry about compelling stories, open worlds and realistic, fully-interactive environments. Capcom wasn’t worrying about real world physics or emergent gameplay when it created DMC4 – it was too busy thinking about ugly monsters, sharp objects, and cool ways in which the two might intersect. The plot is nonsense, the dialogue ridiculous and the whole thing more melodramatic than an entire series of Desperate Housewives – only our Desperate Demi-Demons are packing swords and shotguns. Even the soundtrack is spectacularly overblown, with a genuinely terrible fighting song that sounds like someone’s half-witted attempt at industrial thrash, with cringe-inducing lyrics to match. I wonder if you can download the MP3?

Admittedly, there are a handful of reasons why you can’t help wishing Capcom had shown a little more ambition – and even a little more effort at times. DMC4 can feel wilfully old-fashioned, with some shockingly linear level designs, the return of the old ‘we’ll lock you in this chamber until you defeat several waves of enemies’ routine and even invisible barriers all over the shop. Why, in this day and age?


For the most part, the camera is computer-controlled, and while the angles and movements chosen might be arty, they can also be confusing. Worst of all, while you can save just about anywhere you like, actually loading a game dumps you right back at the start of the mission. As you have to buy continues and the game tends to pile on several tricky multi-monster scraps before you even reach a boss battle, this is an issue. It’s also an annoyance if you’re playing late or filling in a time gap and you’d like to stop before tackling the boss. I’m not sure why Capcom thinks this sort of thing is still acceptable. 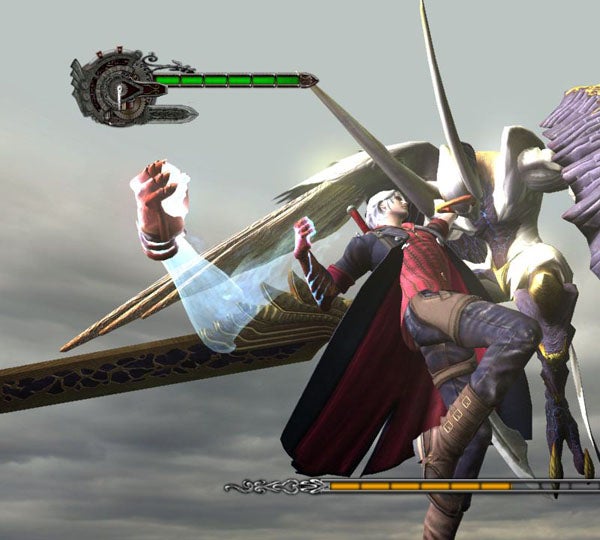 Beyond these niggles, there’s another major reason why I can’t be too generous to DMC4: repetition. It’s a real pleasure to find out that, having played the first two-thirds or so of the game as Nero, you’re back in the cowboy boots of the premier demon slayer, Dante. Sadly, Capcom then uses this as an excuse to re-use the levels, monsters and bosses you have already defeated as Nero on the way to a big final showdown. This isn’t quite as bad as it sounds – new weather effects, new challenges, reworked sections and the very real differences between Nero and Dante when it comes to fighting mean that these levels don’t really feel like padding. All the same, there’s something a little cheap and cheeky about this cunning plan. 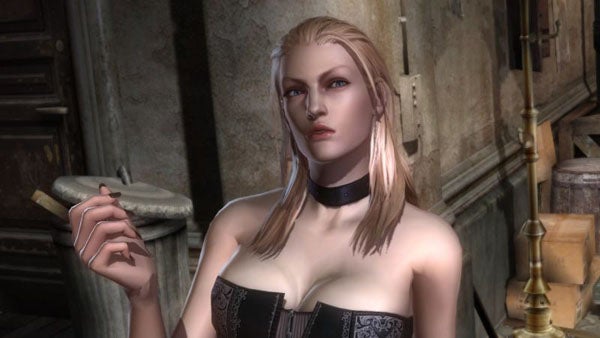 I guess there’s something ironic when you criticise a game for dishing out more of the same when – effectively – that’s exactly what makes DMC4 such a strong sequel. Yet you come away feeling that Capcom needs to do something more with a DMC5 if it wants to avoid the accusation that it’s merely clothing a last generation game in a shiny new HD costume. Still, it’s a testament to how good the core DMC gameplay is that we can play DMC4 without that thought continually arising. At the end of the day, the new DMC4 is no rebirth or resurrection, but it is – at least – an awful lot of fun.


Is DMC4 too close to DMC3 for comfort? Maybe, but Nero’s new abilities and the stunning HD graphics go a long way towards hiding the fact. Those slice-and-dice, demon-slaying antics still feel good.