Meanwhile, the development teams at N-Fusion and Eidos Montreal have done their level best to find a control system that works on touchscreen. You can do some of the work just by tapping, tapping on a point onscreen to make Saxon run towards it, tapping on a cover button to put him into cover mode, tapping enemies to keep them in your sights and tapping other buttons – some context sensitive – to select weapons, fire and use doors, terminals and devices. If you want more control (and you will), then there’s also a more conventional system where you use your left-thumb to move and your right thumb to change view and direction. Ingeniously, the game keeps both active at once, so you can effectively get the best of both worlds. 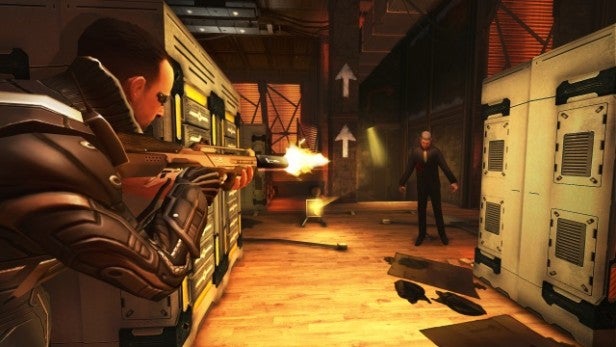 Sadly, it’s the controls where things start to fall apart. The system isn’t really fast enough or precise enough for combat, and even though the enemy AI is painfully dumb, it’s still a challenge to take on multiple targets. This slightly ruins the badass feel, particularly when you just know that you and Saxon could take on the world with just a couple of analogue sticks. Stealth can also be frustrating. Even with an intelligent system for shifting from cover to cover you sometimes can’t move quite fast enough, and there are times when the game gets confused about what you’re doing, failing to register a tap for a sneak attack or speedy roll in favour of leaving you floundering around under incoming gunfire.

This isn’t insurmountable, but there’s also a sense that The Fall is ever so slightly dull. For all the futuristic scenery the ideas don’t go far beyond infiltrate a heavily guarded gang hideout followed by infiltrate a heavily guarded hotel, and the action in the hub sections boils down to chatting your way through a chain of contacts before you’re sent on the next real mission. It’s all a little short of real tension and drama, which wasn’t something you could say about Deus Ex, Human Revolution or even the much-derided Invisible War.

Some reviewers and players have complained about game-breaking bugs, crash bugs and glitch-ridden AI. We’ve seen some evidence of the latter, as enemies refuse to spot you even though you’ve just blasted away a close-by comrade, but in a game where your foes stop actively searching within a period of just a few minutes, that hardly sticks out like a sore thumb. We haven’t experienced any other issues on an iPad 4 running Apple’s latest firmware, but it’s worth checking the App store page and any forums before you buy. 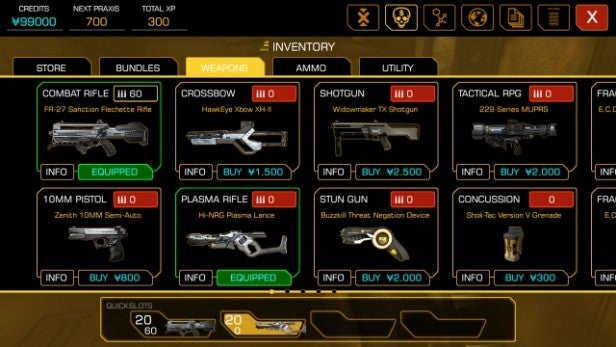 On the subject of buying, in-app purchases rear their ugly head in-game. These are optional, and you can get along fine with the augmentations and upgrades you earn and the weapons you find in the game, but it is tempting to purchase in-game credits and experience boosts just to get you over the next hurdle, and cheap shots like a passcard for a nightclub that costs 1000 credits don’t exactly help give a good impression, even if smart players will find a variety of alternative approaches. 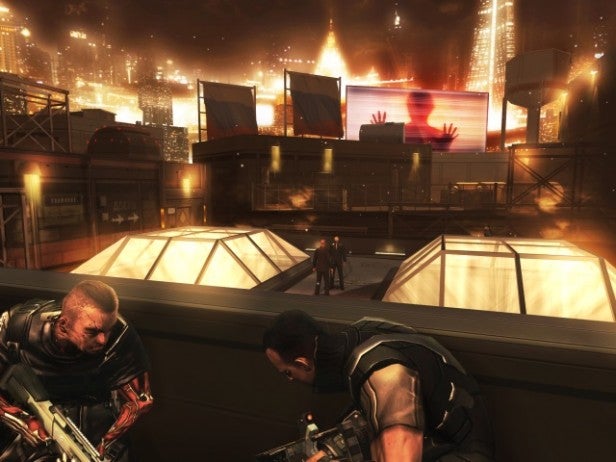 The Fall’s problems are serious, but not disastrous. There’s still something engaging about sneaking your way through the game’s spaces, taking out enemies one by one and dealing with the bloody aftermath when your best laid plans fall apart. And there is something very cool about playing a game with this level of polish and sophistication on an iPad, even if the controls wreck the sense of immersion from time to time. Deus Ex: The Fall is short at around six hours, but it’s far from bad value and we’d be happy to see where Square-Enix could take this and other console properties next.

Verdict
Deus Ex: The Fall does an amazing job of bringing the look and feel of Deus Ex to a mobile platform, but control issues, generic level design and poor AI ruin the sense of immersion that has always been a hallmark of the series. It’s a game that leaves you feeling that more sophisticated console-style games are possible on an iPad, but not 100% convinced that this is one of the best.