Available on iPad 3, iPad Mini and above, iPhone 4S and above
Before we say anything else, credit where credit’s due. Square-Enix hasn’t done what so many other publishers have done. It hasn’t taken a much-loved franchise and used the title and the style to skin a shooting gallery, a 2D platformer, a pseudo 3D blaster or any other kind of cut-down game. Deus Ex: The Fall, for better or worse, is Deus Ex: a fully 3D FPS with RPG elements, stealth and a story set in the same world as 2011’s Human Revolution, using characters and scenarios from tie-in novel. The Deus Ex: Icarus Effect. It’s a very ambitious thing to try on mobile platforms, and it works better than you might expect, if not quite as well as you might hope. 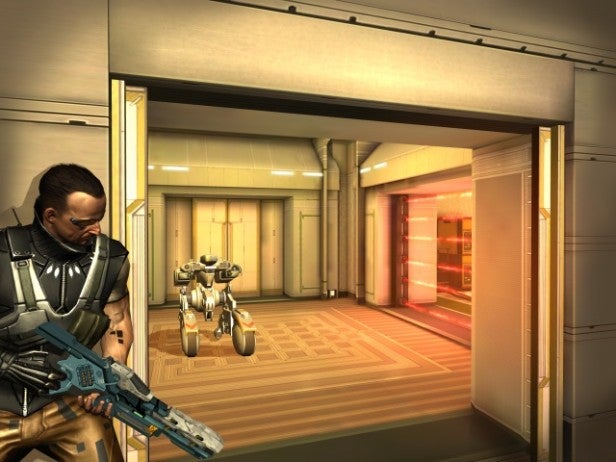 Deus Ex: The Fall – Another Take on the Human Revolution

The Fall stars Britiah mercenary, Ben Saxon, who with US agent Anna Kelso is hiding out in Costa Rica following the events of Icarus Effect. The pair are in need of Neuropozene, the wonder-drug that stops augmenteds’ bodies rejecting augmentations, and while attempting to find a source in Panama City, Saxon uncovers yet another dark plot: this time centred on drug manufacturers and private military corporations. It’s all a little clichéd by Deux Ex standards, and Saxon has all the charm of a low-rent Jason Statham clone, with a delivery so pedestrian that he makes the real thing sound like Kevin Spacey. Yet, there’s enough here to keep you moving through the story, reading messages, meeting contacts and – inevitably – creeping through handy ventilation ducts. 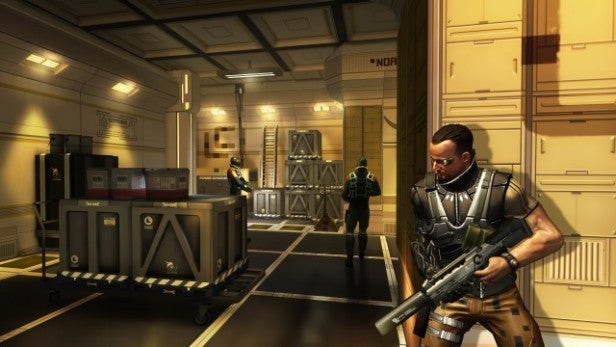 The first big surprise about The Fall is how much of the look and feel of Human Revolution has made it through intact. There’s less detail in the scenery and architecture and some of the supporting cast suffer from a primitive, angular look, but everything comes bathed in that signature amber wash, and this is recognisably the same world that you’ve seen in Deux Ex before. Played on an iPad 4, it really does look pretty good, and frame rates are impressively smooth.

The second big surprise is how far the gameplay goes to replicate Human Revolution. Areas are split into bite-sized chunks, with most tied into a central Panama City hub, but within those constraints the environments are far from linear, and the game always encourages a range of approaches, from the risky go in with all guns blazing, to sneaking, hacking and an improvised mixture of all of the above. There are side-quests to encourage you to explore the locations in more detail, plus secret areas where you might find extra ammunition or those every useful praxis packs. The Fall isn’t a dumbed-down Deus Ex by any means. 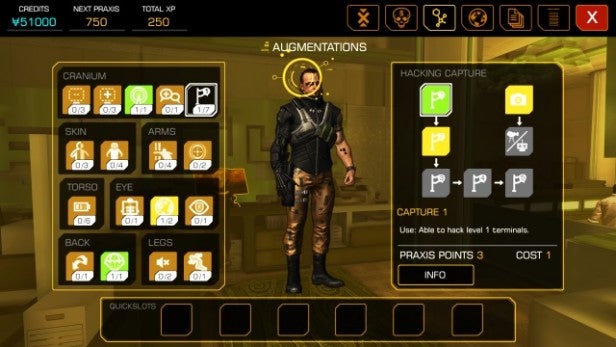 Look further and deeper, and you’ll find even more familiar Deus Ex mechanics. Conversations play a big part in the game, and provide a valid route to obtaining key objectives and altering the direction of your game. Experience points are turned into praxis points, which can be used to add and upgrade abilities in the field. If you want to optimise your protagonist for stealth, combat or hacking, there’s plenty of scope to do so. Weapons can also be discovered, purchased and customised, with silencers, ammunition upgrades and boosts for accuracy and damage, and there’s no shortage of choice or depth. If you want the full Deus Ex experience, The Fall goes as far as a mobile game can to make you feel satisfied.

Next
Deus Ex: The Fall – The Verdict Review