There is a school of gamer – your current writer included – that desperately wants to acclaim the new Deux Ex as another stone-cold classic. The original, when it was released eleven years ago, was truly ground-breaking, fusing the action of the first-person action game with the choice and depth of an RPG in a way that only System Shock 2 had approached before. For the twenty-something hours it took to complete it, Deus Ex was an obsession. You could play it as a shooter, a stealth game or a combat-heavy RPG, or – as most of us did – some weird hybrid of the three, but however you played the complex gameplay and rich storyline kept you glued from the beginning to the end (or ends if you were really keen). 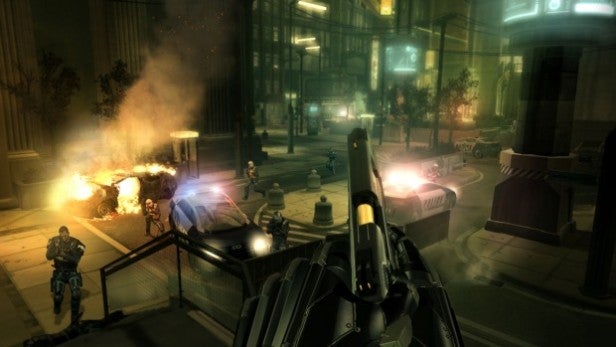 Those of us within this group will find much to love about Deus Ex: Human Revolution. It retains all the elements of player choice, first-person combat, cybernetic augmentation and stealth that made Deus Ex so enthralling. It’s a game designed by people who don’t want to lead you by the nose from level to level, but want to give you a world worth exploring, and the freedom to explore. Enemies can be dispatched through headshots, sneak attacks, tranquiliser darts, shotgun blasts to the face or all of the above, and there are enough computers to hack, vents to crawl in, boxes to stack and windows to climb through to put a smile on any old-school PC gamer. There’s always more than one way to get from A to B, preferably without a major skirmish, and always something else to discover, explore or collect. This is a thinking man’s game, and thinking men everywhere will like it. 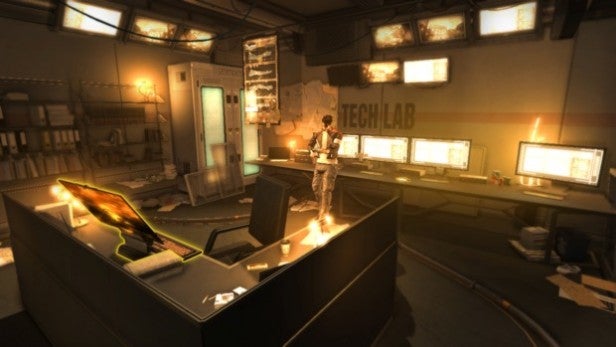 As in the first game, it’s the interaction of the gaming systems that make it work so brilliantly. Every situation in the game can be tackled with a number of approaches, and the more the game goes on, the more your character and your tools become tailored to your specific style of play. In the world of Human Revolution, experience points mean Praxis points, and Praxis points can be spent on a range of cybernetic augmentations that affect your character’s perceptions, their strength, their resistance to damage, their hacking skills and their stealth capabilities. Inevitably, you end up favouring one set of skills over another, and so building the best warrior, techno-spy or assassin that you can. What’s more, all the weapons are also customisable, leading you to beef up a silenced pistol at the expense of a noisy assault rifle, or possibly visa versa. Experience points are handed out for practically any activity, so even if your carefully planned stealth attack becomes a bloodbath, it’s not a disaster. Organically, without anyone telling you what to do and how to do it, the game supports and rewards the way you want to play it.

The storyline and setting, meanwhile, work like a treat. Set in the years before the original Deus Ex, Human Revolution is a tale of humanity at the crossroads. A security officer at a cutting-edge cybernetics company is almost killed in an assault on company HQ by persons unknown. Revived and augmented with the latest cyber-tech, he’s set on the trail of the mercenaries who attacked him, and who killed a scientist he had some unresolved relationship with. The visual style is designed to mix renaissance motifs with the trappings of cyberpunk, and at times the game carries this off extremely well. Neither your hero or the supporting cast have the charisma or personality of the stars of, say, Mass Effect or Red Dead Redemption, but there’s a decent story here to get your teeth into. 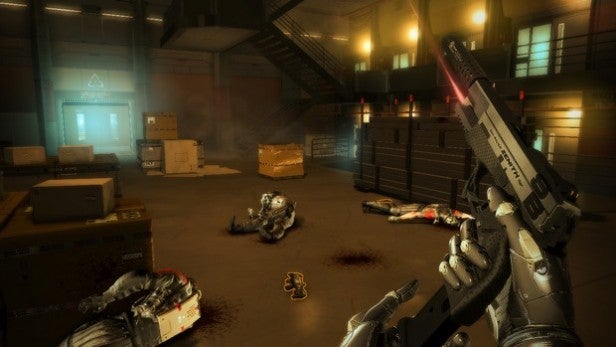 But Human Revolution still has its share of faults. In the early stages, while the game is busily feeding you tutorials and starter missions, it can feel curiously unengaging. The opening Detroit hub gives you masses to do, but not always a lot of motivation to actually do it. The graphics are heavily stylised, with some beautiful design and pseudo-Renaissance flourishes, but they can also look oddly dated. Put Human Revolution against a Killzone, a Gears of War or an Uncharted, and neither the characters nor the scenery look cutting-edge, though the design is just as considered and coherent. Audio brings up other issues. The score itself is fantastic, hitting all the right sci-fi and action notes, but stilted dialogue and repetitive samples let the game down, spoiling the illusion of a living, breathing future world.

And while Human Revolution can work brilliantly as a stealth game, particularly with a few choice augmentations and a patient attitude, it falls down slightly as a shooter. On the easy and medium difficulty levels the AI is smart enough to patrol and search in a convincing fashion, but not really smart enough to make for exciting opponents. Your character and your weapons can also feel underpowered in the early chunk of the game. Despite an effective cover system, take on enemies in any numbers and it will only be a few shots before you’re dead. Up to a point, this is in keeping with the think-before-you-blast approach of Deus Ex, but it also makes the game frustrating unless you want to spend your life cowering in a vent. Meanwhile, boss battles where key enemies can take dozens of shotgun blasts to the head really have no place in a game like this. On the plus side, as your character gets upgraded, the combat improves with it. We’ve had some fun playing a badass, but also some fun playing sneaky sniper with a silenced pistol, and there’s nothing like using mines to turn hunters into hunted – or recently exploded. 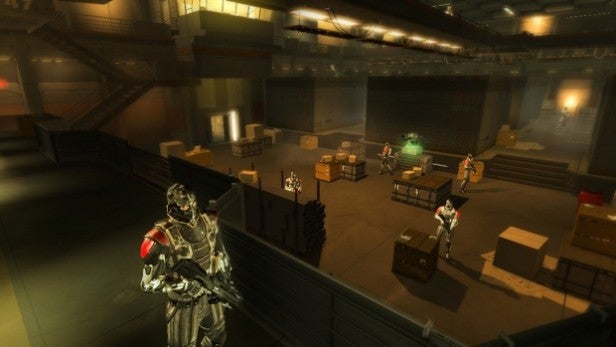 Despite these problems, it’s worth persevering, because this is one of those games that gets better and better the more you play and the more time and energy you put into it. By the time we’d infiltrated an underground base and started to uncover the conspiracy at work, we were hooked, and more of the old Deus Ex magic started to kick in. It’s at this point that the hours begin to bleed into each other, and you’re starting to think about your next augmentation, or how you might get up on that fire escape, or whether you could sneak into the security room and co-opt the security bots instead of fight them, instead of worrying that it’s three in the morning and you have work the next day. And most importantly, you’ll get many, many nights like this. The main storyline alone will take you upwards of twenty hours to work through, and once you throw optional sub-quests and objectives in the mix, the total just keeps going up. While your average Call of Duty is a blink-and-you’ll-miss-it affair, Human Revolution is a long-term relationship. It might take you a while to realise that you love it, but once you do it’s a love that lasts.