If you’re a dedicated fan of the franchise then you won’t need us to tell you that the wait for a full-fat Pokémon outing on Nintendo Switch is getting painful. However, the timely arrival of Detective Pikachu on the Nintendo 3DS means you won’t be totally starved of Pocket Monster action in 2018.

If you’re expecting this to be your typical “gotta catch ’em all” escapade then you’re likely to be disappointed; in fact, this new adventure has more in common with 3DS stablemates Professor Layton and Ace Attorney than it does with Pokémon Ultra Sun and Ultra Moon. Rather than recycle gameplay from past instalments, it aims to do something new and different with the vibrant and universally appealing world of Pokémon.

In fact, it’s striking just how detached this game feels from the established Pokémon universe, despite showcasing many of the Pokémon we’ve come to know and love via our handheld consoles over the past few decades. The titular yellow sleuth is perhaps the most unusual; this isn’t Ash’s Pikachu, so don’t go expecting any high-pitched “Pika! Pika!” chanting. Instead, we’ve got a gruff-sounding, coffee-consuming wise guy who’s magically capable of communicating eloquently with Tim, the human protagonist. Forced together entirely by fate, this intrepid duo solves cases by compiling evidence, interviewing witnesses and combing locations for telltale clues. 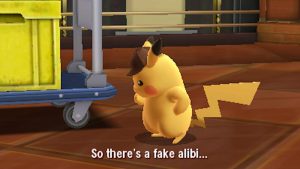 Cases start out relatively small, but they soon become more complex with much higher stakes – and along the way Tim is able to learn what caused his beloved father to mysteriously vanish just two months prior. Why Tim and Pikachu are able to understand one another is a plot point we’d rather let you discover for yourself. Suffice to say, the dynamic between these two unlikely companions is one of the most appealing elements of the whole game – a good omen for the upcoming movie of the same name, in which Ryan Reynolds will be lending his vocal talents to the little yellow ball of lightning.

Like Ace Attorney – perhaps the closest point of comparison, at least on 3DS – Detective Pikachu presents you with a series of self-contained conundrums that you must solve by piecing together various bits of evidence. You can chat with humans (and, thanks to Pikachu’s presence, extract valuable intel from Pokémon) to gleam various bits of information relating to each case. The more information you learn, the more questions you can pose to other individuals, meaning that you often have to converse with the same person more than once to learn everything they know.

Collecting evidence is as easy as walking up to various objects and interacting with them, and you can consult your continually updating case files at any point to refresh your memory. At various points, Pikachu himself will interject with hints or theories that point you in the right direction. Handily, when a scene has given up all of its possible clues, the game prompts you to move onto the next location.

Despite the lack of Pokémon-catching, Detective Pikachu does an excellent job of integrating the lore of that world with your valiant crime-solving exploits. You’ll encounter many a famous Pokémon on your travels, and their established traits and habits are neatly harnessed to create beautifully logical puzzles.

For example, early on you’ll realise that Burmy’s proclivity for using nearby objects to create a temporary cloak will lead you to the whereabouts of a missing item. However, this doesn’t mean an intimate knowledge of the Pokédex is required to extract maximum enjoyment, as the game does a superb job of explaining everything so you can come up with your own conclusions and theories. 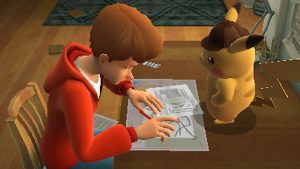 There’s a gentle pace to the whole thing, and it’s impossible to take the wrong path and hit a dead end. Even selecting the wrong answer when compiling or presenting evidence doesn’t spell an unfortunate end to your sleuthing, as you can simply try again without any penalty.

This approach even extends as far as the action-orientated ‘quick time events’, which occasionally occur during your quest. These task you with pressing a button at the right time or repeatedly tapping a button to make something happen. Fail in these challenges and your only punishment is an alternative cutscene before the story continues as normal.

Add to this the inclusion of an optional ‘easy’ mode in which signposting is even more obvious, and you have a game that can hardly be described as difficult or frustrating. Granted, there are times when putting together a logical argument for each case seems more obtuse than it possibly should be, but on the whole you’ll breeze through Detective Pikachu’s nine chapters in just over ten hours. What’s important to note here is that you might not necessarily see everything during your initial run, so repeated playthroughs may be required if you’re a diehard completionist.

Despite running on Nintendo’s older portable system (sales would arguably have been better on the Switch), Detective Pikachu remains a handsome enough effort, although there are no auto-stereoscopic 3D effects to round everything off.

The music is a little repetitive but you’ll find yourself humming it regardless, and the voice-acting is of a pleasingly high standard. It might be a little pixelated around the edges but Detective Pikachu is still an attractive proposition, and it isn’t too hard to see how Creatures Inc. could up-scale this for a Switch remaster in a year or so’s time. 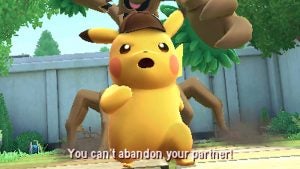 Detective Pikachu ranks as one of the most interesting Pokémon spin-offs we’ve seen in years, and does an wonderful job of offering a fresh perspective on a world we’ve become almost uncomfortably familiar with in recent years.

The lack of any real challenge is an issue – and one that seasoned gamers might find hard to stomach – but while it lasts, Detective Pikachu is quality entertainment that’s well written, brilliantly presented and sets the scene nicely for the upcoming Hollywood movie.