Update: Destiny 2 has since launched

Available on Xbox One and PS4 (version tested)
If last year’s The Taken King was about reworking and recalibrating, this latest Destiny expansion is an exercise in crowd-pleasing consolidation. Bungie has spent two years learning what works and what doesn’t, and developed a pretty good idea of what fans want and what they don’t. As a result, Rise of Iron feels tight and clearly targeted at the core audience, complete with plenty of service for the long-serving fanbase.

If you’re not a fan – or simply dog-tired of Destiny – then Rise of Iron probably won’t change your mind. You’ll find the new campaign short, the re-use of existing material annoying and the whole package lacking any drive to push the game forward. But if you’re hooked and you’re looking for more of what you love, then Rise of Iron is an absolute no-brainer. It’s not quite up there with The Taken King, but it’s easily the second best of Destiny’s four expansions. 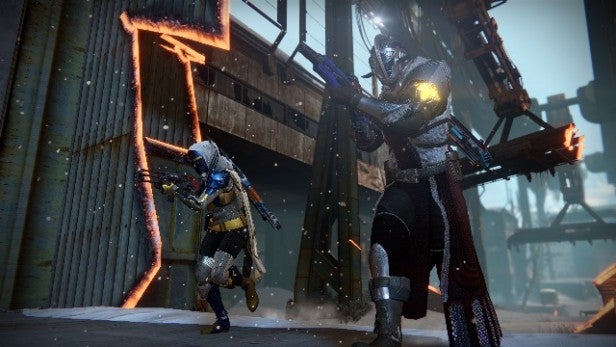 The new expansion brings the action back from the spooky dreadnoughts haunting Saturn and the war-torn sci-fi exotica of Mars and Venus, and to the ruins of Old Russia. Here a group of diabolical Fallen have reawakened a long-dormant technology, which both corrupts and enhances everything it touches. Thanks to the efforts of the Splicers – a bunch of gene-tweaking, power-crazed Fallen loons – the creepy artificial tendrils of this technology, Siva, get to transform a chunk of ex-Soviet real estate into the Plaguelands.

Now only two things stand in the way of Siva, the Splicers and their creepy apocalypse: Saladin, Destiny’s immortal grump and the last of the Iron Lords, and you, by now a legendary Guardian. Well, actually there’s you, Saladin and roughly 30 million other players who might pick up this expansion, but let’s not even go into all of that. 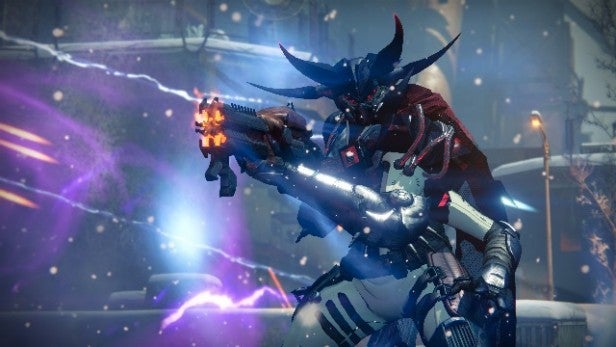 Rise of Iron doesn’t have the most inventive or original campaign, with echoes of Halo in its “alien forces meddling with powers they can’t control” storyline, and it lacks the central villains that gave The Dark Below and The Fallen King their impact. Beyond that, though, it’s a goodie, pitting you against a more potent brood of Fallen in a series of missions that showcase an impressively alien variant of the area around the Cosmodrome.

The first mission takes you through a series of skirmishes on the way to the top of a wind-blown mountain temple, setting a strong, cinematic mood for later efforts that’ll see you assaulting Splicer fortifications and delving into claustrophobic tombs, which do a fantastic job of mixing Destiny’s sci-fi style with a Diablo-esque gritty fantasy vibe. From Archon’s Keep and Archon’s Forge to twisting maintenance tunnels, crawling with Siva’s weird bio-tech tendrils, Rise of Iron packs in strong locations, powerful enemies and challenging objectives.

Bungie rediscovered its level design mojo with the Taken King, and it hasn’t lost it down the back of the sofa for the new expansion. Missions are fast-paced, varied and to the point, focusing on exploration and a stream of satisfying firefights rather than falling back on Destiny clichés like the old “hold this point while Ghost scans this” routine.

You could argue that some of the set-piece clashes and boss battles recycle ideas from The Dark Below and The Taken King, but they’re fun, tactically interesting and not too reliant on throwing wave after wave of enemies at you. It won’t take you long to work your way through Rise of Iron’s main story missions – a good evening should do it – but you’ll be happy that you did. 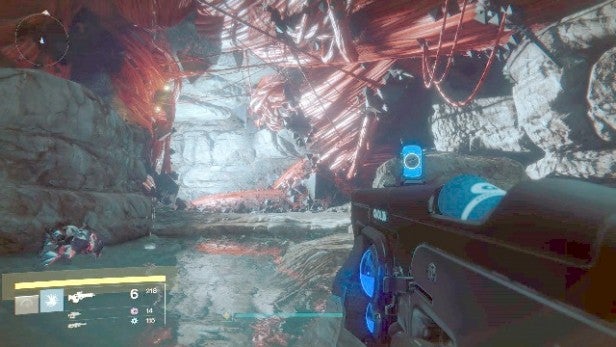 That might make it seem like you’re being short-changed on content, but anyone who played The Taken King will know that the story is only a springboard for a wealth of other stuff. Quest lines continue even once the SIVA threat has been put down, and Saladin has a whole bunch of mates who have their own objectives they’d like you to tackle. There’s a new Strike against a Fallen High Priest in a colossal foundry, plus remixed, tougher versions of two old favourites, Devil’s Lair and the Summoning Pits. The new Strike, The Wretched Eye, is an absolute belter, with some fun platforming segments and a massive brawl with a big surprise to finish off. It should help reignite any lost enthusiasm for those vanguard playlists and weekly/nightly Strikes.

And there’s more where that came from. By now, Bungie knows that we’re suckers for weird quest lines that have you wandering, slaughtering and collecting your way around the solar system, just in the hope that there’s a new exotic item at the end of the trail – and Rise of Iron plays up the nostalgia factor by reintroducing some old favourites.

There are loads of new missions to take and new vanguard bounties. There are secrets to discover, challenges to complete and hidden quests that are currently the stuff of rumour and speculation. Bungie knows, by now, that the hardcore fans can’t resist this kind of stuff. 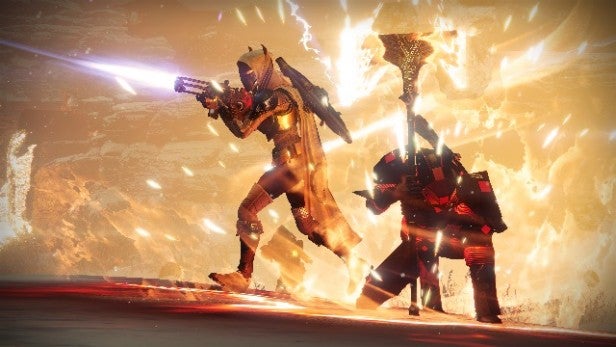 There’s even a new arena mode – Archon’s Forge – where you can summon a bunch of badass Fallen and tackle them in a wonderfully chaotic and ultraviolent public event. It’s so much fun that you wonder why Bungie has chosen to hide it in a hard-to-get-to corner of the Plaguelands map, and why it’s locked behind a slightly baroque system of access keys. Cleverly, Bungie has also added a new Record Book feature to your line-up of character and inventory screens, which makes it easier to track your progress through the different quests and objectives, and ensure that you’re not missing anything out.

And all of this just gives you more reason to enjoy what’s made and kept Destiny so popular: its killer combo of Halo-style gunplay, lovely loot-grabs and MMOG-ish character progression. There’s something about Destiny’s core action that just feels right. Sure, the weapons don’t deviate much from established archetypes, but aficionados will know that there’s a world of difference between, say, your average Auto Rifle and Monte Carlo, and that pulse rifles, scout rifles and sniper rifles will all demand a slightly different style of play.

Frankly, it’s worth playing Rise of Iron just for the new Young Wolf’s Howl sword, a brilliant power melee weapon that allows you to slice and dice your way through tough crowds with ease. It’s a joy to wield. 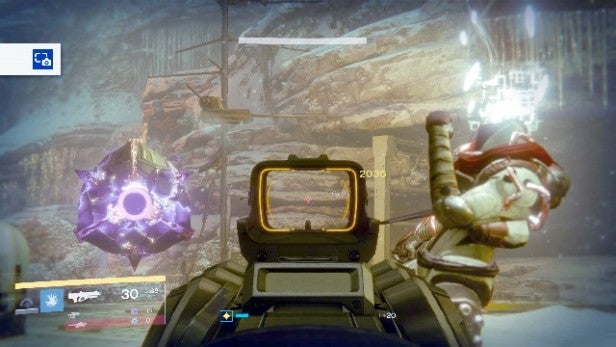 Your enemies are smart enough to be a challenge and distinctive, with the new Fallen types pressing you hard when the shield gauge wears right down. Bungie has got the basics of motion, aiming and shooting absolutely right. The loot, meanwhile, might actually be too liberally thrown out, sometimes leaving you with a huge selection of goodies to compare and contrast as you try to decide which helmet, gauntlets or sidearm will help you maximise your Light Level – still very much Destiny’s key stat.

As a more PvE-focused player I’m not a huge fan of Destiny’s Crucible zone, but plenty of players disagree and they’ll find Destiny’s competitive game enhanced by two new Kill Confirmed-inspired modes, Supremacy and Rumble Supremacy. Here kills only count if you can grab the crest left behind, adding a new dimension to the action, while ensuring that cowardly-custard sniper types have to get out there in the field and mix things up. The new maps are pretty cool as well, even if one of them – a tight group of corridors and chambers entitled “Icarus” – is only available on PS4. 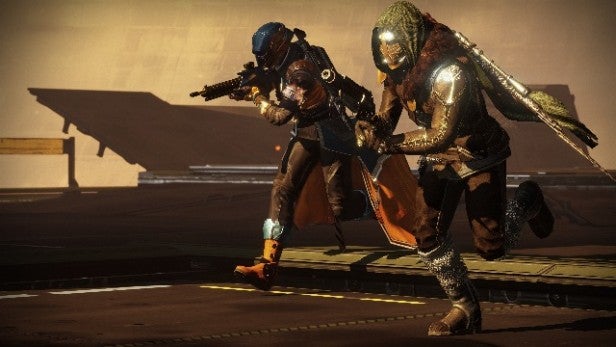 Passing a definitive verdict on Rise of Iron at this stage would be naive. It’s too early to know how long the drip-feed of new content will last for, and how well the challenges and quest lines will play out. It’s hard to say how the re-introduction of notorious weapons such as Thorn and Gjallarhorn will affect either Crucible or the new or improved Strikes.

At the time of writing Bungie has yet to unveil Rise of Iron’s new Raid, Wrath of the Machine, and it’s going to be a while before the fans decide whether it’s up there with Vault of Glass and King’s Fall or not. Right now, though, Rise of Iron does more than enough to keep you glued to Destiny for another few months, even if there’s a slight sense that Bungie needs to raise the bar for Destiny 2.

Love Destiny? Rise of Iron gives you more to love, with a strong, if short, campaign, new quest lines, challenges and gear to collect, a great new Strike, two entertaining remixes and a brand new Raid. The Plaguelands is a large and intriguing new region to explore, and the new crucible maps and modes mean there’s something for more competitive Guardians to chew on.

If you’re being picky, you’ll note that there’s nothing that fresh or innovative on offer, and that Bungie has its work cut out if it wants to stop Destiny going stale. For now, though, Rise of Iron hits all the right notes for the Destiny hardcore and is another great addition to the game.