What is the Denon CEOL RCD-N8?

It’s a network-enabled CD receiver that allows you to play discs, listen to music from external sources (including iPods) and stream tunes from servers on your home network via the built-in Wi-Fi antenna. The unit’s coup de grace is AirPlay, which was an upgrade on the previous version, the Denon CEOL RCD-N7, but is included as standard here. Oh and in case you were wondering, ‘ceol’ is Gaelic for music. 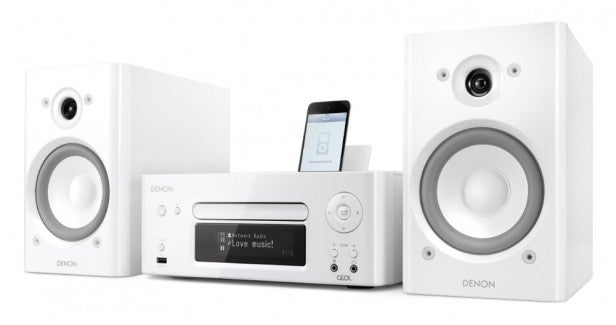 With a sleek gloss-black finish that shimmers and gleams in the light, the RCD-N8 is a real stunner. It’s unashamedly modern, but not in your face – the gentle curved edges at either end of the fascia give it a touch of elegance. If black’s not your bag it’s also available in a gloss white finish.

Width-ways it measures a compact 280mm and carries its chunky 112mm height well. Build quality is decent enough – the unit feels solid and weighty, although the slightly plasticky finish stops it hitting the luxurious heights of some other systems.

The fascia is fairly busy, sporting a large three-line OLED display, a discreet CD tray above it and plenty of buttons that blend in with the black finish. There’s also a USB port, which allows you to play media files from flash drives, iPods and iPads, plus a 3.5mm input for portable devices and a headphone port. The volume controls are two buttons as opposed to a dial, which is a minor disappointment. A large direction pad is provided for up-close menu control.

On top of the unit is a panel that flips open to reveal a 30-pin iPod connector – that means it’s no good for iPhone 5 without an adapter. The dock charges the device while in standby, something the N7 didn’t do.

On the back is an extensive array of sockets, including an optical digital audio input, two analogue stereo inputs, Ethernet and a subwoofer output. Sturdy binding posts are provided for the speaker cables. There’s an FM antenna input and a WPS button for quick Wi-Fi setup.

Talking of the speakers, Denon does make a pair to go with this system (pictured above) which cost an extra £99. However, the RCD-N8 isn’t being marketed with these as retailers tend to sell them with superior-sounding speakers.

Forgive the cliché, but the Denon CEOL RCD-N8 is a one-stop music shop. It’s good that Denon has kept faith with CDs – there are still lots of physical media fans still out there – but it’s the network/internet side where the CEOL really excels.

Hooked up to a network you can play music from PCs and NAS drives (it’s DLNA 1.5 certified) or beam music to it using AirPlay or Windows Media Player’s Play To, but there’s no Bluetooth, which would have provided a quicker, easier way of streaming music.

Elsewhere you can stream music from two online services, Last.fm and Spotify. The latter is new to this system, and its inclusion will literally be music to the ears of its many subscribers. There’s also internet radio access, putting thousands of stations within easy reach, as well as an FM radio tuner with RDS – although we’d have preferred DAB.

As you’d expect from a dedicated music system, format support is wide-ranging. It’ll play MP3, WMA, AAC, ALAC, FLAC and WAV, the last two in 192kHz/24-bit quality (not offered by the N7). Another new feature is gapless playback, which is a godsend when listening to live albums as you don’t get that annoying drop out between songs.

Finally, the RCD-N8’s digital amplifier musters 2 x 65W of power. Inside, the N8 uses a fully digital concept from input source to output stage, with a ‘simple and straight’ circuit design to keep interference to a minimum.