An accomplished performer, the Denon Home 350 is big, powerful and produces prodigious amounts of bass. It’s also expertly engineered, with a host of features for those looking to stream their favourite music.

All three include Denon’s HEOS multi-room system, which supports most streaming services, along with built-in Wi-Fi and Bluetooth. The units also work with Amazon Alexa, Google Assistant and even Apple’s Siri thanks to AirPlay 2.

As the top model in the line-up, the 350’s larger body houses high-quality stereo speakers and powerful digital amplification. As with all the speakers in the HEOS range, you can use the 350 on its own, as part of a stereo pair, or you can even use two as rear speakers in a 5.1-channel system with Denon’s DHT-S516H soundbar and subwoofer.

The Denon Home 350 looks like it means business, with a large and solidly constructed cabinet. It comes sporting a wrap-around fabric grille, in a choice of black or white finishes, with a status light sitting under the Denon logo at the front. The top is composed of toughened glass, and there are touch-sensitive controls which, thanks to a sensor, illuminate when your hand gets near them. 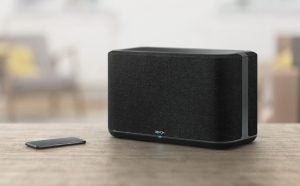 The controls consist of play/pause, volume up/down, and six presets for your favourite radio stations. There’s no remote control included, but you use the free HEOS app instead (iOS and Android). The connections are primarily wireless, with built-in Wi-Fi that supports 2.4 and 5 GHz, along with Bluetooth and Apple’s AirPlay 2. 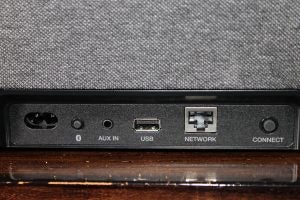 In terms of physical connections, there’s an Ethernet port at the rear, along with a 3.5mm stereo analogue jack and a USB port for external storage devices such as hard drives and memory sticks. There’s no headphone socket, so late-night listening will require turning the volume down. Along with the physical connections, you’ll also find buttons for connecting to the HEOS network and pairing Bluetooth devices.

The Denon Home 350 has an impressive pair of speakers under the hood, comprising two ¾-inch tweeters, two 2-inch mid-range drivers, plus two 6-inch woofers for the lower frequencies. There are six class-D digital amplifiers to provide power to each of the drivers, making this a particularly well-endowed wireless speaker.

The Home 350 puts these speakers and their corresponding amplification to good use by handling almost any audio format. The result is that this wireless speaker offers gapless playback of high-resolution audio up to 192kHz/24-bit using files in FLAC, WAV, ALAC, and DSD 2.8/5.6MHz formats, either via a network or using the rear USB port. 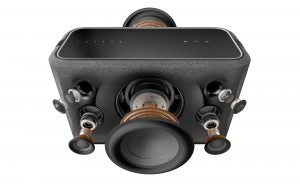 The app allows you to set the brightness of the status light, as well as the brightness and fade-out delay of the touch controls. It also allows you to set the bass and treble, along with providing direct control over a range of embedded music services including Tidal, Amazon, Pandora, Deezer, Spotify, TuneIn, and SoundCloud. By having the apps embedded in the speaker, you can carry on streaming music without the need for your smartphone to be constantly tethered to the Home 350.

The Denon is also Roon Ready and supports Amazon Alexa, Google Assistant, and Siri via AirPlay 2. At the moment, a separate external device is required for accessing Amazon and Google’s smart assistants, but apparently an upcoming firmware update will activate the two microphones on the top panel, allowing voice interaction without the need for a third-party device.

The Denon Home 350 is extremely easy to setup, allowing you to quickly connect with your home network and create a HEOS multi-room system. If you have more than one HEOS device, you can either play music on each device individually, altogether, or even in groups. The app is intuitively designed and highly effective at controlling this speaker, and any other connected HEOS device.

The HEOS network is super-effective, creating a multi-room system that’s robust and responsive. There’s no discernible delay, and the synchronisation is excellent. The control and interaction is also flawless, and the playback equally seamless. The Home 350 worked well with Apple AirPlay 2 devices, and there were no problems connecting it with an Amazon Echo. 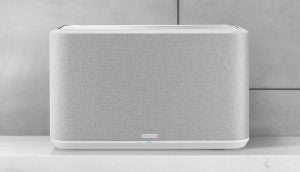 The Home 350 looks fairly simple from the outside, with it minimalist design and discreet finish. However, as soon as you start to listen to something you realise this is a superior sonic performer. Denon knows how to put together a really good speaker, and it also knows how to properly drive that speaker. This is immediately apparent, with a delivery that’s both big and powerful.

Unusually for a wireless speaker, you can put the Home 350 into a large room and it won’t be overwhelmed. It has sufficient amplification and headroom to go loud without distorting or sounding strained. Despite its relative size, this speaker is capable of some decent stereo imaging, and has a surprising amount of bass that provides an excellent low-end foundation. 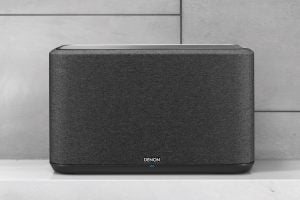 However, it’s more than just a powerhouse that’s all brawn and no finesse. This speaker has a clear and detailed delivery that benefits from an un-congested mid-range, and a well-defined treble that’s free of sharpness or fatigue. As a result, the Home 350 produces a balanced performance across the entire frequency range, ensuring an accomplished delivery.

The overall sound quality retains a pleasing warmth, and the clarity of vocals is exceptional. The bass is well integrated, ensuring it reinforces the audio, rather than over-powering it. There’s also a sense of scale to the presentation – so, regardless of your musical tastes, this speaker is sure to please with its wide and convincing soundstage.

You should buy the Denon Home 350 if…

The Denon Home 350 is a fantastic wireless multi-room speaker that delivers a big and bold presentation, regardless of the size of the room. The 350 can produce a soundstage big enough to handle even the largest of rooms, making it something of a rarity among wireless speakers. But it’s also capable of a detailed and refined delivery that’s sometimes missing from speakers this size.

If you’re already committed to Denon’s HEOS multi-room system, the Home 350 is a great addition. If you’re not then it’s the perfect place to start, with network connectivity and almost every streaming service, not to mention Apple AirPlay 2 and Bluetooth connectivity.

You shouldn’t buy the Denon Home 350 if…

The wireless speaker market is huge, and the choice is almost unlimited these days. Naturally, the multi-room market is still dominated by Sonos, although the Amazon Alexa, Google Assistant and Apple HomePod speakers are making major in-roads.

The obvious alternative is the Harman Kardon Citation 500, which costs the same and looks very similar. It’s equally well-proportioned, offering a detailed and powerful sound to ably compete with the Home 350.