For those who want their smart speakers to be truly smart, the Home 150 still lacks the promised support for built-in voice assistants. Everyone else will have to make do with a very good sounding, fun and - if you have the kit to advantage of it - versatile wireless speaker

The Denon Home 150 is the smallest effort in the Japanese brand’s wireless speaker range, with smarts, built-in HEOS and Hi-Res audio capability.

Denon’s Home series of speakers is its answer to Sonos’ domination of the multi-room speaker market. Arriving in three different models, the Home 150 is the smallest of the trio.

Denon certainly has the pedigree, and both the Home 350 and Home 250 delivered. Can it make it a three-peat?

The Home 150 shares the same look as its bigger siblings. It’s not as minimalist as the Sonos One, but approaches that level of anonymity. Tucked inside is a mono speaker with two Class-D amplifiers driving a 25mm tweeter and 89mm woofer. 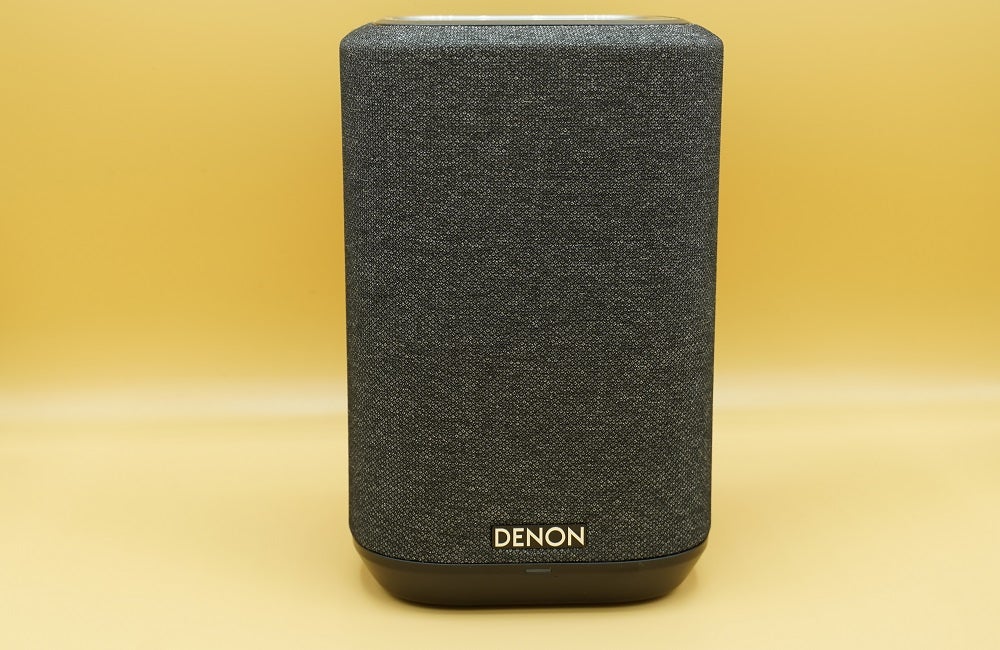 Available in black or white, the bulk of the speaker is wrapped in fabric that looks nice but is coarse to touch. The touch panel is made out of hardened glass and features presets (up to three), volume and playback controls. Hover over it and proximity sensors illuminate the controls, which is a neat touch.

Down at the bottom is a small status light. When in operation it’s constant blue but changes colour based on the action, such as updating (orange) or Bluetooth pairing (green). The intensity of the light can be changed in the HEOS app. 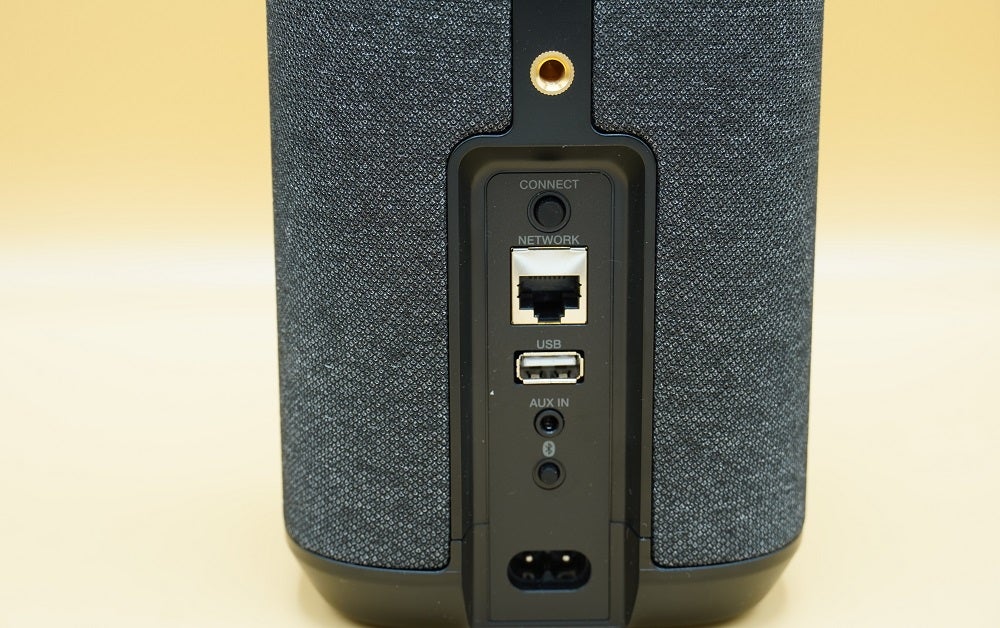 Around the back is a screw thread for wall-mounting, a ‘Connect’ button for joining the HEOS network: Ethernet socket, USB port, Aux-in and a button for enabling Bluetooth. Though it’s mains-powered, the supplied cable is of decent length so you shouldn’t have to worry about being too far from a mains outlet.

Elsewhere, the Home 150 weighs 1.7kg – fractionally less than the Sonos One despite being taller (187 x 120 x 120 HWD, mm). It’s a fair-looking effort in the sense that it’s not intended to grab your attention. It’s the audio that does the Home 150’s talking.

Any wireless speaker worth its salt considers itself smart. The Denon Home 150 meets most of the requirements, but its credentials are lacking in one aspect – it still doesn’t have native voice support.

A firmware update was promised to rectify this after the January launch, but we’re way past the Summer Solstice and there’s still no sign of it. The Home 150 is a  ‘Works with [add voice assistant of choice]’ smart speaker, and interaction is relegated to a few commands (pause, resume etc) via another device, but you can’t ask the speaker to play music. There’s a choice of Google Assistant and Alexa for ‘voice assistance’, and switching between the two requires the HEOS app. 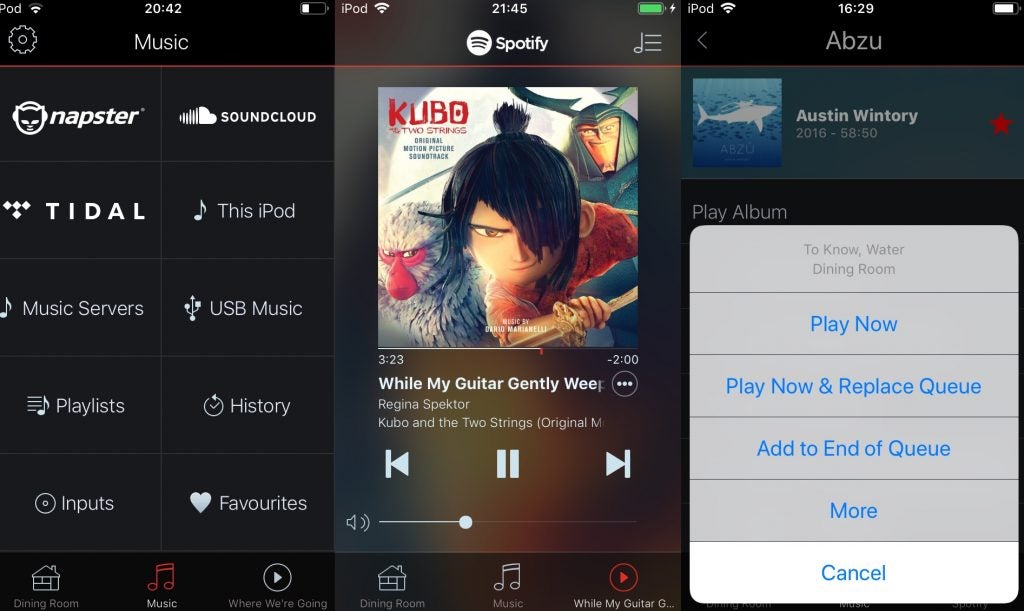 The HEOS app (Android, iOS) is the gateway to Denon’s interconnected ecosystem, and allows the user to rule as overlord across HEOS devices. It offers integration with music streaming services (though Spotify leads you to the native app): access to EQ settings, device customisation; and in a recent update, optimisation of bass by indicating whether the speaker is freestanding, next to a wall or in a corner. The bass tuning works in real time, too.

The HEOS app is a tidy, if basic interface that lacks the modern sheen of the Sonos control app. Streaming service support includes Spotify, TuneIn, Amazon Music, Deezer, SoundCloud, Napster and Tidal; and Spotify aside, libraries, search and playback of content can be managed within HEOS. A HEOS account needs to be set up to take advantage of all this.

The Home 150 supports Wi-Fi (2.4 and 5GHz), Bluetooth 4.2 and AirPlay 2 (which brings Siri into the equation). There’s a slight lag when using AirPlay, which is not always helpful when jumping back and forward through a playlist.

File support includes MP3, AAC and WMA, and stretches to Hi-Res with 192kHz/24-bit FLAC, WAV, ALAC and DSD 2.8/5.6MHz. These files can be played over the network or via the rear USB port.

The Denon Home 150 can be used as a stereo pair, or as rear surrounds for the DHT-S716H soundbar and DSW-1H subwoofer to create a 5.1 system.

Despite its size, the Home 150 is a speaker that needs no invitation to go loud. It’s not the widest soundstage due to its compact dimensions, but it packs plenty of bass which has been refined a little since the bass tuning update. Compared to the One SL, it’s bolder in its presentation, but lacks the subtlety of the Sonos.

Vocals are articulated well, pushing them forward from the rest of the mix. Jill Scott’s voice Golden is convincingly reproduced, the Home 150 capturing her breathy tones and inflections. 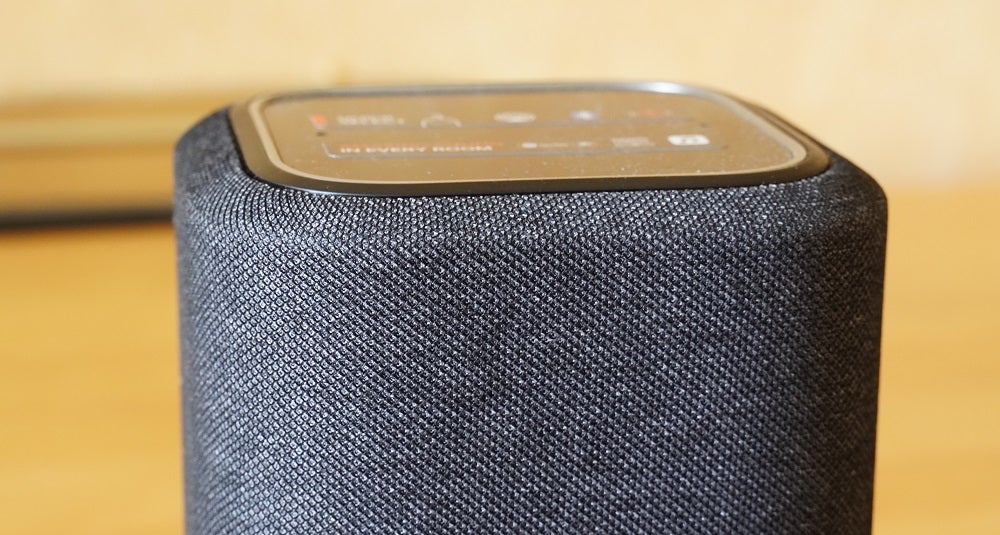 Volume can be a slightly tricky to gauge, and needs adjustment fairly regularly. What was right for one song wasn’t necessarily fitting for another, especially at high volumes. Another thing to take heed of is streaming Tidal through the HEOS app. It only streams Masters’ tracks at 16-bit, not 24-bit, which is a bit of a disappointment.

Dynamically there’s a good sense of rise and fall, the sweeping nature of Ennio Morricone’s The Untouchables is given an enjoyable rendition as the Home 150 retreats during quieter moments before springing into life, underlining the track’s heroic nature. 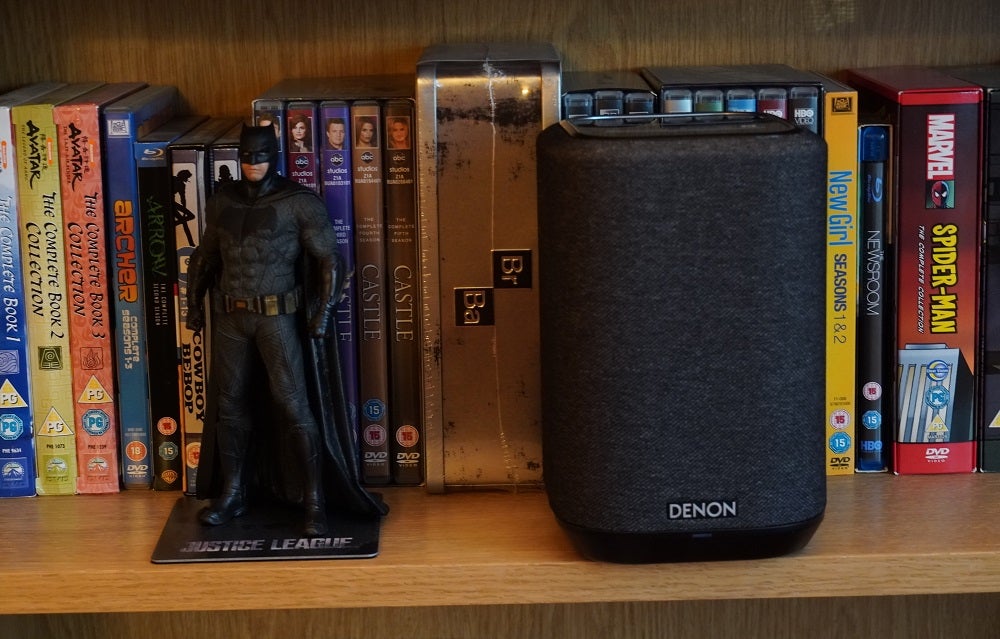 Tonally it’s good, if rather warm and thick in its presentation. There’s a good, full-bodied presence to it, the organ from Hans Zimmer’s Where We’re Going? offers a nice sense of weight and heft. Treble is rolled off a little, not quite as sharp or as piercing, but enjoyably described.

There’s more bass on tap than in the Sonos One, and bass is more controlled than it is with the Marshall Uxbridge, with the update appearing to tame the Home 150’s bassy tendencies for better balance and control. Even so, the Home 150 offers a good amount of low frequency energy. One issue is the slightly tubby, ill-defined notes between the mid-range and bass. It’s not a huge worry, but some notes aren’t quite as clear as you might want. 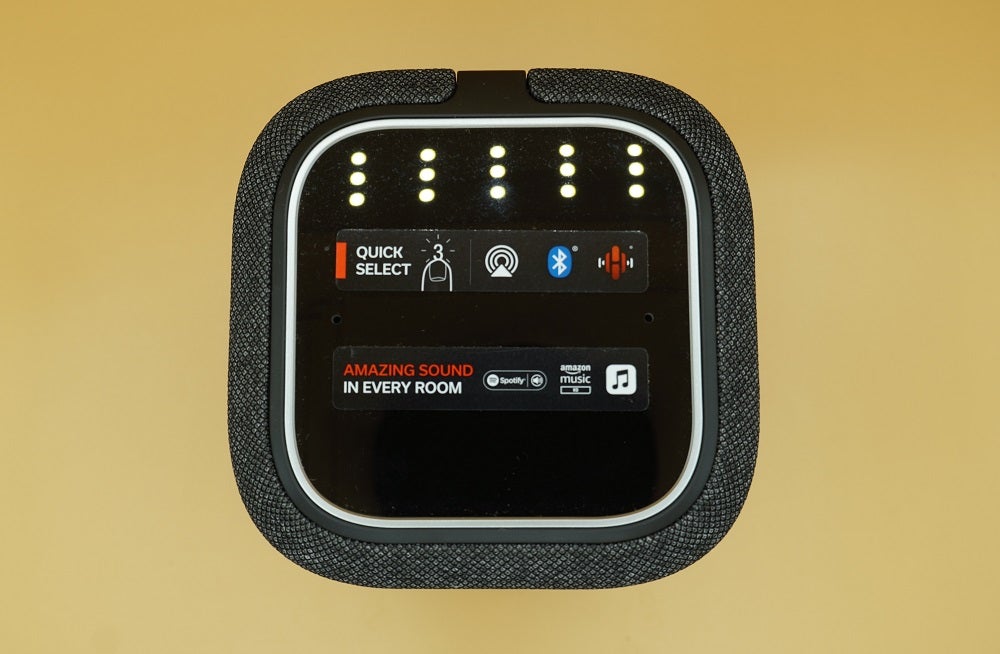 Sonos remains the elephant in the room, and the 150 lacks the subtlety, midrange detail and even-handed balance of its rival;. The Home 150’s warm character makes its tone a bit thicker, losing out in terms of zip and attack. Put that aside though, and the Denon Home 150 puts in a energetic, smooth and loud performance.

You should buy the Denon Home 150 if…

The Home 150’s at times bombastic, fun and appealing performance is sure to win many listeners over. If you enjoy bass then this speaker rumbles better than most, especially for its size.

If you’re ensconced within the Denon framework then HEOS compatibility offers multi-room fun and with a compatible Denon soundbar, it can be used as a rear speaker pair. Even if you aren’t in the Denon ecosystem, this is a fun little speaker to spend time with.

You shouldn’t buy the Denon Home 150 if…

At the time of review, the Denon Home 150 still doesn’t have proper voice assistant support several months after launch. It’s due to come, but no date has been announced.

At the moment the Home 150 can’t be fully recommended for its smarts, especially as it’s £20 more expensive than the Sonos One which has both Google Assistant and Alexa integration.