What is the Denon HEOS HomeCinema?

Denon’s wireless soundbar not only delivers room-filling sound from your TV but also forms part of a Sonos-style multiroom system with other speakers in the HEOS range. So after blasting out a Blu-ray disc you can kick back and listen to songs stored on NAS drives, PCs and smartphones, or stream them from Spotify, Napster, Deezer and TIDAL.
At just under £600 it’s not cheap, but if Denon can back up its handsome spec with a jaw-dropping performance then it might be money well spent.

In the box is a 1017mm-wide soundbar and a wireless subwoofer. The soundbar is robustly built and easy on the eye, with subtle slopes and ridges keeping things interesting. The front of the soundbar is covered in a soft cloth grille, while the top surface has a smooth matt black finish and silver side trim, very much in keeping with the rest of the Heos speaker family. It’s not quite the luxurious proposition I expected for the money but undeniably well designed. 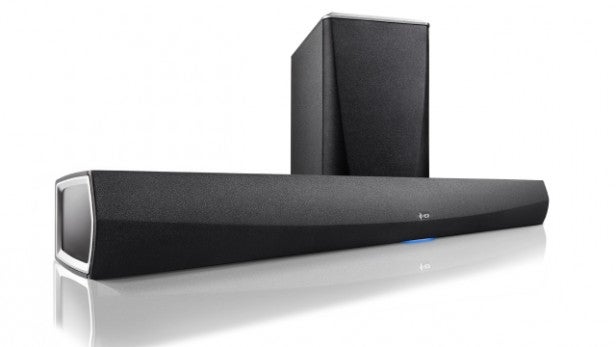 The complete absence of clutter on the front is both a blessing and a curse; on one hand it gives the soundbar a minimal look that doesn’t catch the eye in a darkened room, but on the other the lack of a display panel makes it hard to know what the Denon is doing.
A glowing light at the bottom tells you the soundbar is on. It blinks and glows in different colours during the setup process and lights up solid blue during playback. You can dim the light in the HEOS app setup menu. On one of the end panels are three chunky buttons for up-close volume control.

The Denon supplies a decent selection of sockets on the back but doesn’t go overboard. You get HDMI input and output – the latter equipped with ARC – but because they’re v1.4 there’s no 4K or HDCP 2.2 support. The sockets are located in two recesses and face sideways to make wall-mounting easier.

With ARC and optical on board, you can go down the ‘single-cable connection’ route or run your Blu-ray deck through the HDMI ports and take advantage of its Dolby Digital, Dolby Digital Plus and DTS decoding. But if you want to hook up more than one HDMI-equipped device you’re out of luck.
You also get optical, coaxial and 3.5mm minijack inputs, plus a USB port for playback of music files. The Denon boasts built in 802.11a/b/g/n Wi-Fi (2.4GHz and 5GHz) with Ethernet as a wired alternative.
The soundbar comes with keyhole fixings on the back for wall mounting and two sets of feet at different heights for tabletop placement. It even offers an IR repeater should the bar block your TV’s remote sensor. 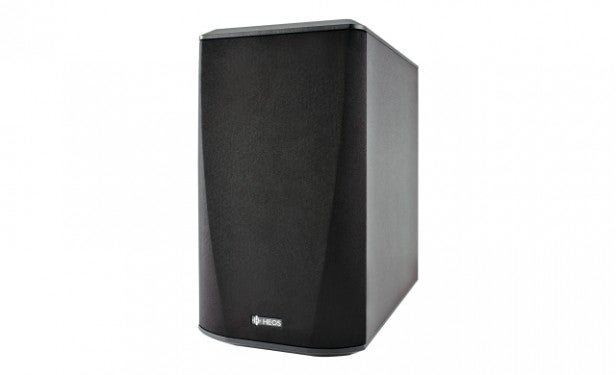 HEOS HomeCinema’s subwoofer is designed for people who don’t want a subwoofer. Its compact size allows it to be tucked into tight spaces, while wireless connectivity lets you place it anywhere (within reason). It’s styled in a tasteful black finish with angled edges and a cloth grille on the front.

The feature highlight is multiroom functionality, which is controlled by Denon’s HEOS smartphone app. With other Denon speakers like the Heos 7 and Heos 5 in other rooms, you can listen to different music sources throughout the house or play the same tracks through them all if you’re in a party mood.
The app provides access to Spotify, Napster, Deezer, SoundCloud, TIDAL and TuneIn. You can also stream music from NAS drives, laptops, USB drives and your smartphone. It plays MP3, WMA, AAC, FLAC and WAV but hi-res audio isn’t supported – playback is limited to 32kHz, 44.1kHz and 48kHz sample rates. 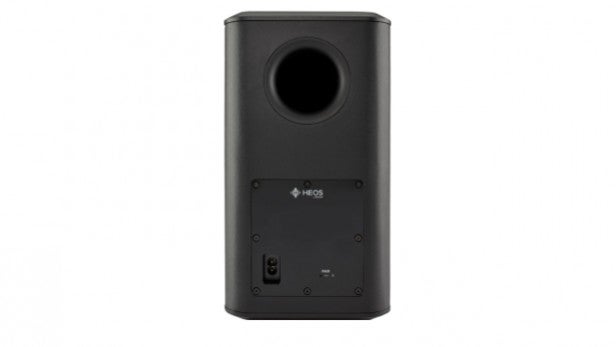 The subwoofer is also powered by a Class D amplifier and features dual 5.25-inch drivers. Time-aligned digital signal processing ensures precise synchronisation with the soundbar. It pairs automatically with the soundbar.

Crucially, HEOS HomeCinema doesn’t come with a physical remote – it’s controlled by the HEOS smartphone/tablet app. That may sound modern and progressive, but in practice it’s a pain in the neck. If you want to quickly adjust the volume or switch inputs, you invariably have wake up your phone, open the app and find the right menu screen – provided the battery hasn’t died of course.
Thankfully, Heos can also be controlled using your TV’s existing remote when connected using HDMI CEC. If it isn’t connected via HDMI, you can programme commands using the app, although it would be nice to have the option of setting this up without a phone.
Initial setup is also carried out through the app. Unusually, you have to connect your phone to the HEOS with a 3.5mm cable and follow the onscreen Setup Assistant. It took lots of button pressing and password entering before the Denon connected to my router. You might have more luck but I found the process frustrating. 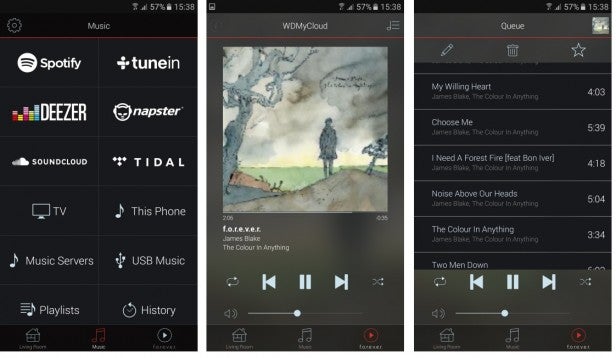 On a more positive note, the app is attractively designed and carries out multiroom functions with consummate ease. There’s a setup menu that lets you add new Heos speakers and configure each one.
The app centres around three menus, accessed from icons at the bottom of the screen. One of them displays all the speakers in your system, allowing you to group them together.
The Music menu displays various sources and services in a grid with recognisable logos. DLNA playback is slick – navigate to your library and tracks are displayed in a list alongside album art. Impressively you can scroll through long lists of music without annoying buffering breaks.
The Now Playing screen is dominated by cover art, with transport controls and a volume slider at the bottom. Tap the queue icon at the top and you can organise the playlist; when you select a new song or album it gives you the option of replacing the current playlist or adding it to the end.
Only two niggles to report. Firstly, the treble, bass and subwoofer volume settings are hidden deep within the setup menu (which isn’t particularly well signposted either). Secondly you can’t jump to a particular point in a song during playback.

It’s a shame that HEOS HomeCinema has so many operational quirks because it delays your enjoyment of its fabulous sound quality.
Play Guardians of the Galaxy on Blu-ray and it delivers the movie’s climax in exhilarating fashion. Its soundstage is massive; hulking spaceships lumber across the screen with thick layers of bass, giving a convincing sense of their size and momentum, while explosions have weight and attack. It restores the volume and dynamism sorely lacking from TV speakers and brings you closer to a true home cinema experience.

The soundbar and sub make a remarkably powerful pairing, effortlessly fill the room. The bar tackles the Blu-ray track with a wonderfully clear and open character – effects are full-bodied and confidently projected. Meanwhile the subwoofer’s tightly-infused bass adds depth and heft without booming. Its rapid delivery as Gamora trades blows with her sister reveals terrific agility.
There’s a gorgeous tonal balance. The clear, full-bodied midrange makes dialogue easy to hear over the hustle and bustle of an action scene, while treble is smooth and detailed but never bright.

As a result you can turn it up loud without fear or distortion or harshness. And when you do, the Denon’s open tone stops complex scenes from sounding congested. Effects are clearly separated and given room to breathe. You won’t miss a thing.
Inevitably, the only thing missing from the Denon’s performance is surround envelopment. The on-board processing does its best to wrap you in sound but effects doesn’t stray too far from the speaker cabinet. However, precise front imaging and pin-sharp clarity are more than adequate compensation.
HEOS HomeCinema is equally impressive with music. James Blake’s Radio Silence gets a more emotive, soulful treatment than you might expect from a soundbar. There’s warmth in the piano chords and Blake’s haunting voice has a rich, organic tone. The music is bursting with detail, from subtle vocal inflections to gentle background effects, while the sub’s nimble bass work fills out the bottom end without being imposing.

Should I buy the Denon HEOS HomeCinema?

From a sonic perspective, the HEOS HomeCinema is certainly one of the best soundbars on the market, giving old favourites like the Q Acoustics M4 and Arcam Solo Bar a run for their money. Its power, scale and open presentation make Blu-ray movies a blast, but it also has the subtlety and tonal balance to make music shine.
Sadly, the Denon loses Brownie points in other areas. The lack of a physical remote and front display panel leave you reliant on phone app for most functions, and little niggles with the app don’t help its cause. And although the Denon offers a decent feature list, the lack of hi-res audio, Bluetooth and 4K support stick in the craw at this price.