What is the Denon HEOS AVR?

The Denon HEOS AVR is the first 5.1 receiver that allows you to use Denon’s HEOS speakers as wireless surround channels, bringing you multichannel sound with minimal cables and clutter. It’s half multiroom maestro, half home cinema hub – a combination likely to entice buyers who want movie muscle and music streaming in one stylish package.

It’s a lifestyle-focused AV receiver for those who find conventional AVRs intimidating. There’s no support for 3D audio, but that’s not the buyer Denon is going for. 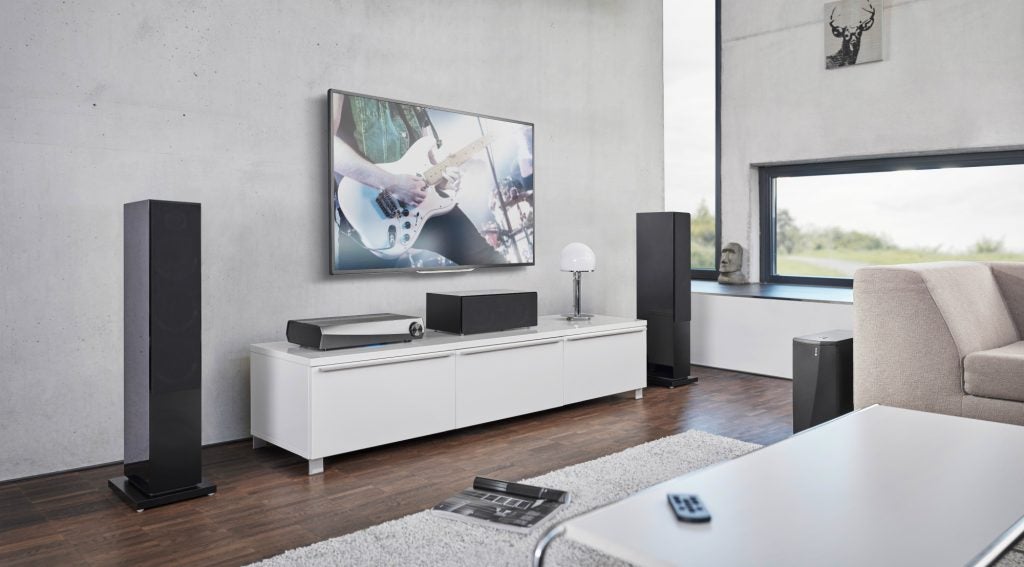 Freed from the constraints of its regular receivers, HEOS AVR gives Denon the chance to let its hair down. Perhaps the most significant departure is its size – at just 90mm, high it’s easier to squeeze into a shelving unit than Denon’s conventional receivers.

Build quality and styling are first class. The industrial gun metal silver finish really looks the part, embellished by an angled fascia and a gorgeous brush-effect top panel. With no buttons or displays, the front panel is pleasingly clutter-free – the only features are a large volume dial and a multicoloured LED underneath the unit. 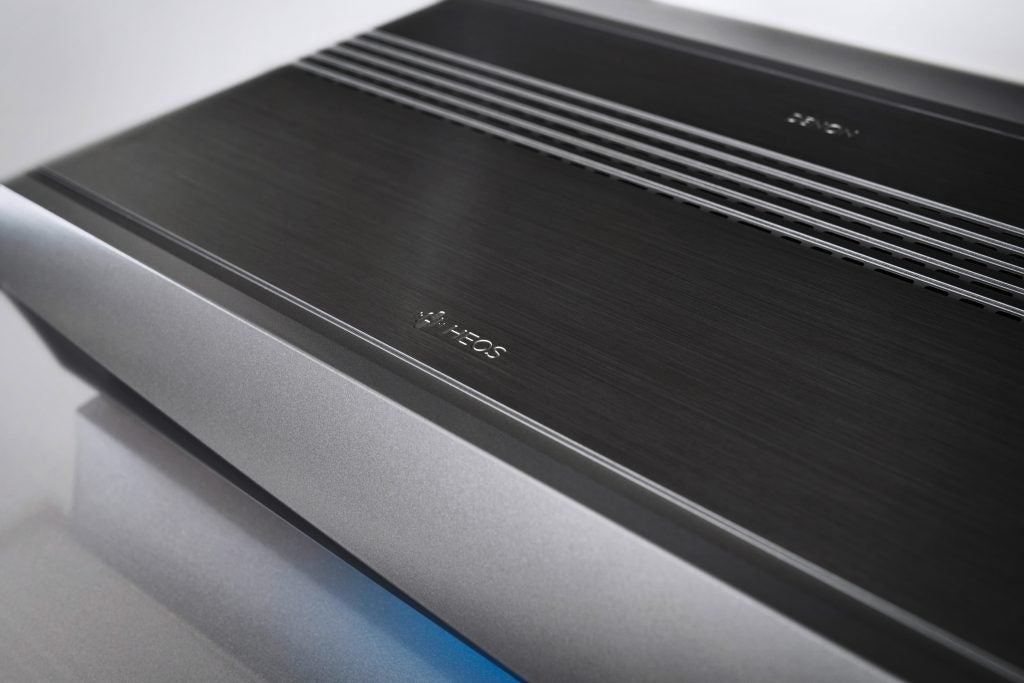 On the back is a decent array of sockets, including four HDMI 2.0a inputs and an ARC-compatible output. There should arguably have been a couple more at this price, but at least they’re all fully 4K compliant, with support for 4K/60p, HDR, Dolby Vision, HLG and HDCP 2.2 copy protection – great news for owners of UHD Blu-ray decks.

Two digital inputs are provided (one coaxial, one optical) alongside two analogue inputs, a subwoofer output and USB port. If you don’t trust your Wi-Fi connection, the ethernet port might offer greater reliability for network streaming.

Also on the back are five sturdy speaker binding posts, which allow you to hook up speakers of your choice. But if you snap up two of Denon’s HEOS 1 HS2 wireless speakers, you can leave the ‘surround’ terminals alone and stream rear effects wirelessly after grouping the speakers with the HEOS AVR.

The range also includes the HEOS Subwoofer, which similarly connects to the AVR wirelessly and gives low frequencies the necessary heft for movie playback. It’s a surprisingly sleek and slender sub, with volume controls on top and a USB port on the back that lets you connect a thumb drive and share music around the whole system. On the inside are dual custom 5¼-inch drivers and a high-power Class D amplifier.

Denon kindly sent us two HEOS 1s and a Subwoofer for our test, which were subsequently deployed around the test room.

Multiroom music playback is clearly the HEOS AVR’s biggest draw, and Denon’s platform is one of the best. Using the HEOS smartphone app, you can send music to any speaker in your system, group multiple speakers together and access music from a range of services, including Spotify, TIDAL, Napster, Deezer, Amazon Music, Mood:Mix, SoundCloud, and TuneIn radio.

You can also stream music from NAS drives and PCs on your home network. Denon added hi-res streaming to this latest generation of HEOS products, so HEOS AVR will happily play FLAC and WAV up to 192/24, ALAC up to 96/24 and DSD5.6. 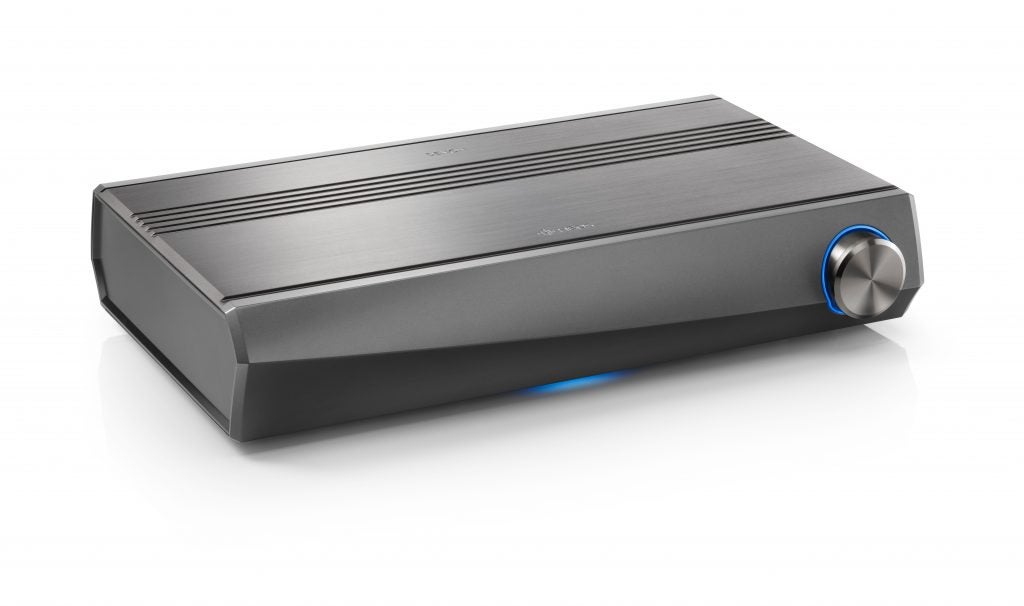 On the receiver side, HEOS AVR’s five power amps provide 50W per channel (two channels driven, 8ohm), with onboard decoding for Dolby True HD and DTS HD Master Audio, but not Atmos or DTS:X – omissions that might stick in the craw at this price. You can use the HEOS AVR in a number of configurations, including 2.0, 2.1, 3.1 and 5.1, using a combination of wired and wireless speakers.

Another key feature is TV Sound Grouping. When playing the same music in multiple rooms around the house, there’s no noticeable delay between HEOS speakers. However, when sending TV sound to another room, there’s a delay of around two seconds, which would cause an echo between the AVR and other speakers. That’s where the TV Sound Grouping feature comes in. 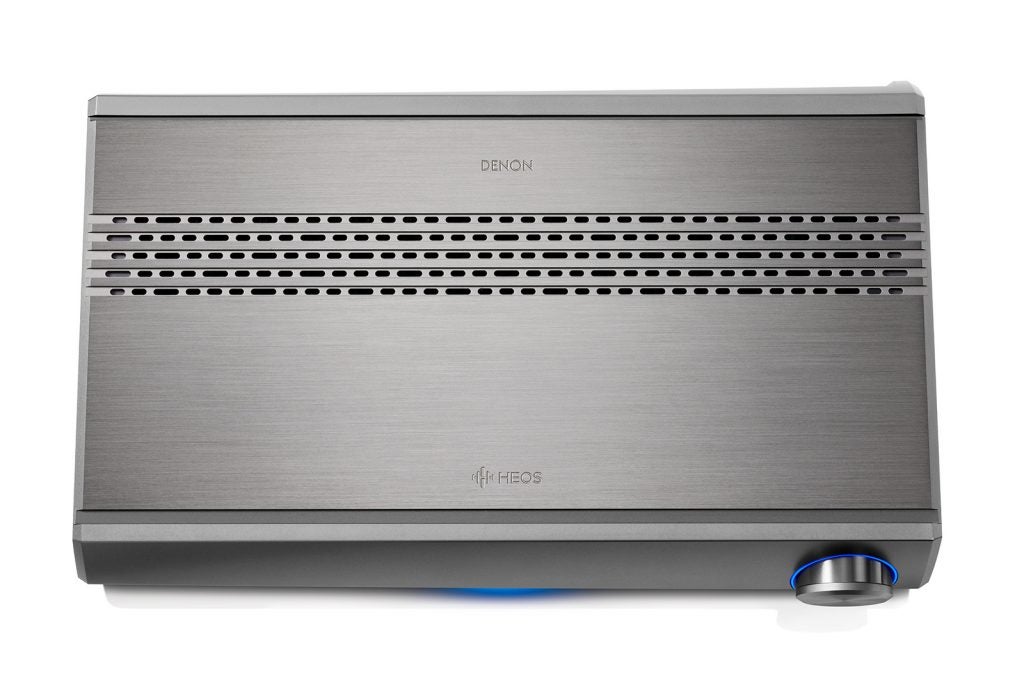 Designed for use with ARC or HDMI inputs (as well as optical or coaxial, where the AV sync in the main room needs to be maintained) TV Sound Grouping brings the delay down to 40ms on a fast wireless network. For typical environments, the delay is more like 100ms, which is still quick enough to play without any noticeable echo in a typical house. You would hear the 100ms delay if you put all speakers in the same room, but that isn’t likely to happen.

It may sound complicated, but setting up the HEOS system is surprisingly easy, if a little unconventional. After you’ve powered up the AVR, you need to fire up the HEOS app and connect your phone to the back of the receiver using a 3.5mm cable. Once you’ve entered your password, it’s transferred to the AVR through the cable. It’s old school, but it works. You’ll need to do this with each speaker in the system.

The HEOS app is one of my favourites. For music streaming it’s fast and unfussy, using a simple white-on-black design, with judicious use of logos and cover art. Unlike some apps, it scrolls through tracklists and albums from A to Z with minimal buffering, and loads up tracks instantly. 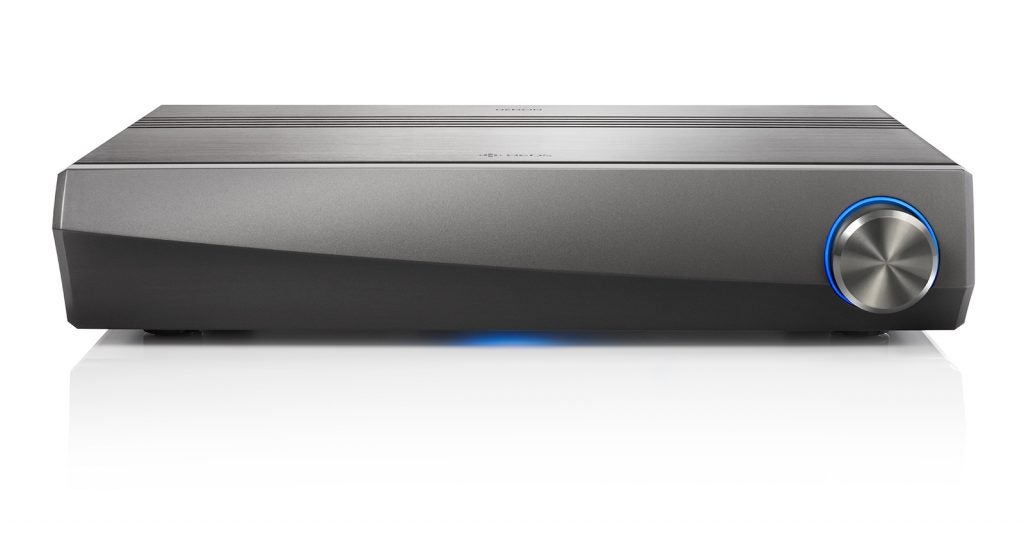 The app breaks down into three areas – the ‘Rooms’ menu, which is where you can manage the various speakers in your system; ‘Music’, where you can access music from servers and services, or switch inputs; and ‘Now Playing’, which packs the screen with playback controls, a volume slider and cover art. An icon at the top lets you switch to the playback queue.

The HEOS app is equally simple when controlling the AV receiver functionality. You can switch sound modes (which include Pro Logic II, Neo:6 and Multichannel Stereo, among others) or access sources using six ‘Quick Select’ presets. No matter what you want to do, the app makes life easy. 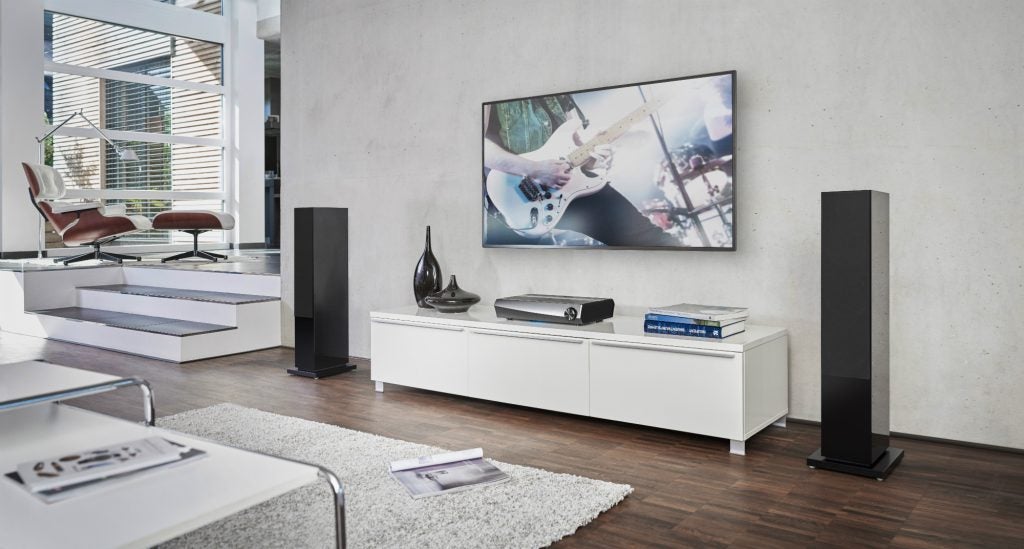 Most of the AVR’s functions are controlled by the app, but Denon also provides a physical remote for making quick volume adjustments or pausing playback. It’s pleasant to use and comes in very handy when your phone goes missing or goes to sleep, but the oversimplified buttons and compact size make me wish Denon had simply included one of its full-size remotes.

What’s more, the lack of front panel display and onscreen menus makes it difficult to check the amp’s status. There’s no auto calibration, which would have helped beginners but isn’t a dealbreaker.

To test the HEOS AVR, I wired up some Monitor Audio Silver 50 speakers across the front, with the HEOS 1 rears and HEOS Subwoofer connected wirelessly to create a 5.1 system. I played a range of Blu-ray discs, CDs and songs from a NAS drive. In action, the HEOS AVR proves to be an impressive performer, offering a lively sound with loads of that famous Denon detail. In terms of muscle, I won’t pretend it’s any sort of match for a full-fat Denon receiver like the AVR-X1400H, but there’s certainly enough power in the tank to get the pulse racing.

Guardians of the Galaxy Vol 2 on Blu-ray is a particular treat. As the gang battles a space squid during the opening credits to the strains of “Mr Blue Sky”, the explosions and blasters fly from the speakers with snap and punch. It lacks the room-filling grunt needed to convey the full scale of the towering alien – something you get from Denon’s regular receivers – but should suffice for the more casual listener at which this AVR is aimed. 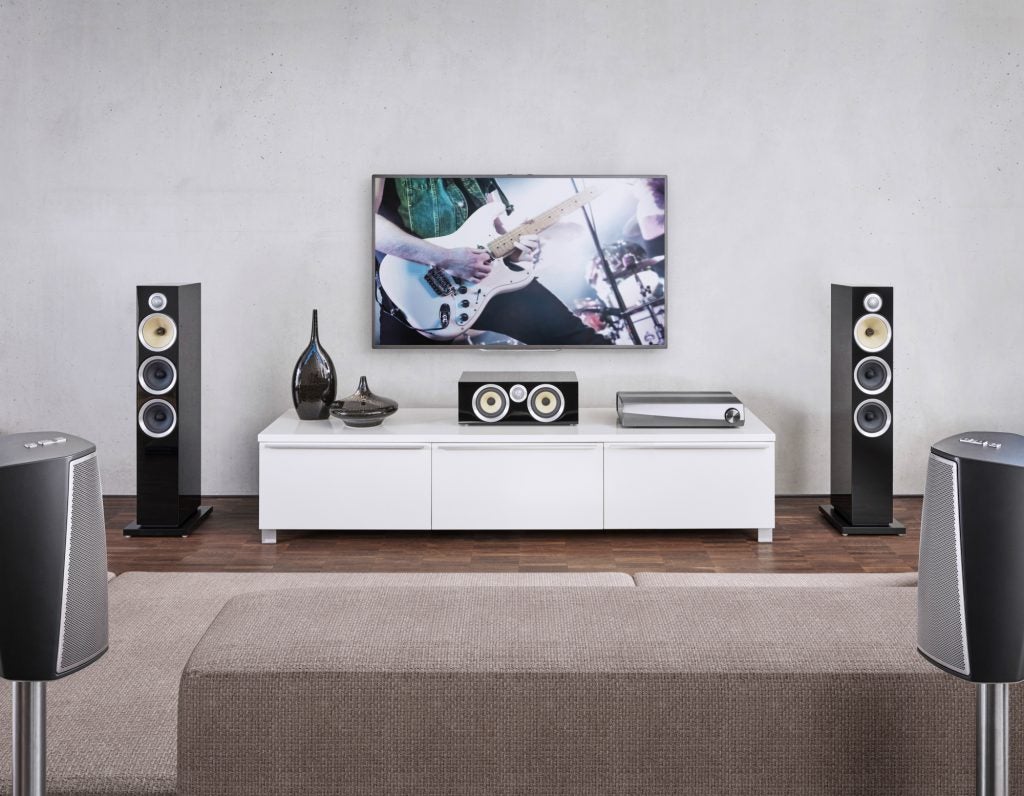 The spacious soundstage and precise, detailed effects help make sense of this chaotic scene. The HEOS AVR dispatches sounds to the relevant speakers quickly and steers them seamlessly. The rear HEOS 1s do a bang-up job with surround effects, showing no signs of latency. If you’re looking for a diffuse, enveloping rear soundfield, then that’s not really their forte, but in terms of placement accuracy and volume, they’re a welcome addition to the 5.1 team. Any minor shortcomings in their performance are more than made up for by their cable-free connectivity.

I cranked up the volume to see what it could handle and was pleased by its composure as it approached maximum. I threw a bunch of other movies its way, including Rogue One, Alien Covenant and Pacific Rim, and in each case it conveyed the soundtrack with poise and drive.

The HEOS AVR’s own bass extension is more than deep enough for two-channel music, but for movie playback the HEOS Subwoofer really ups the ante. It adds subtle solidity and depth to lower-level effects, like speech and music, then slams hard with explosions and gunshots. It’s powerful without overstepping the mark, and handles fast-paced bass with impressive agility. 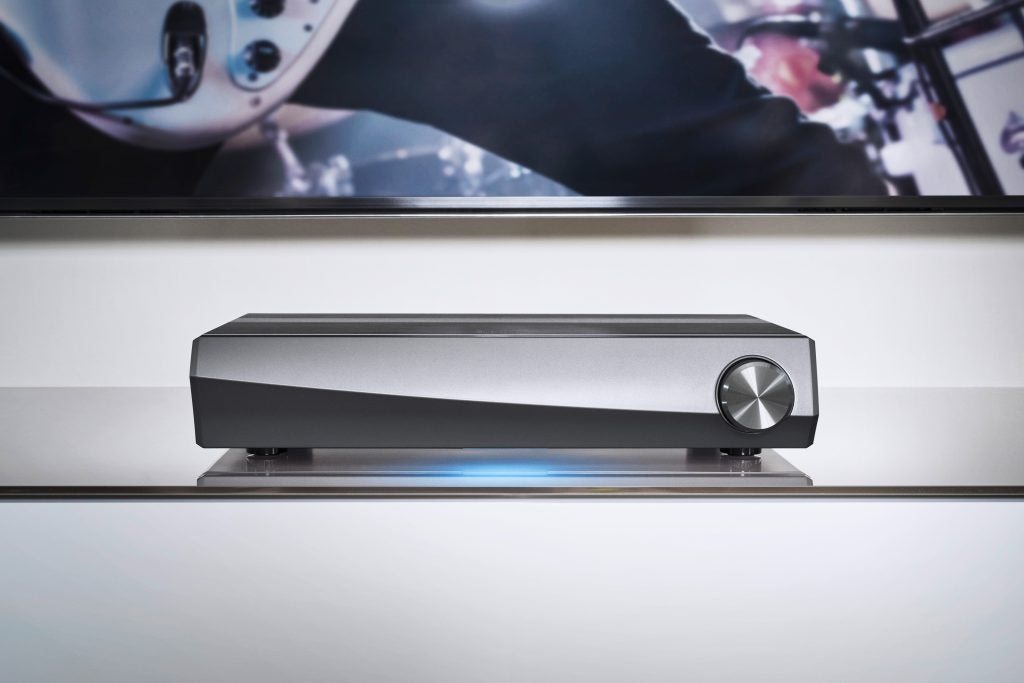 Tonally, it’s a well-rounded, smooth listen, offering the sort of elegant presentation we’ve come to expect from Denon receivers. There’s a lovely sense of balance and cohesion across the system, despite the cross-pollination of speaker brands. Fine sonic details are clear and precise, adding real-life texture to effects like speech and footsteps.

As part of the HEOS range, the AVR will no doubt be used as much for music as movies, and on that score it plays a blinder. Its sound is fluid, detailed and full-bodied; the iconic drum beat intro to “Billie Jean” by Michael Jackson is suitably impactful, and the way it gels with the stabs, basslines and vocals later on makes it impossible to sit still.

Even more impressive is how effortlessly the HEOS system works when playing music through multiple speakers. The app’s ‘Rooms’ menu lets you group connected HEOS speakers by dragging and dropping them onto each other, and doesn’t pause, stutter or hesitate when you start playing a tune. You can also send audio from sources connected to the HEOS AVR to other speakers, quickly and easily – the TV Sound Grouping feature works well, and the HEOS app makes the process simple.

Why buy the Denon HEOS AVR?

What Denon has done with the HEOS AVR is impressive and long overdue. It’s an AV receiver that doesn’t look or behave like a regular AV receiver, making it much a less scary proposition for technophobes. The stripped-back spec and lifestyle design will appeal to a wider buyer base than just home cinema die-hards.

Its trump card, however is HEOS multiroom. The ability to play full 5.1 sound through wireless surround speakers and a sub not only looks good on paper but works superbly in practice, resulting in sparkling movie sound with minimal cabling. Factor in effortless music streaming and TV Sound Grouping, and the HEOS AVR really is an amp to be reckoned with.

Granted, the AVR’s sound lacks a little oomph compared to Denon’s other receivers, while the stripped-back design and functionality – designed to appeal to non-techy buyers – doesn’t always work. But on the whole, Denon’s attempt to broaden the appeal of the humble AV receiver is a triumph; the perfect example of how to seamlessly marry home cinema and multiroom music.

Denon’s elegant, lifestyle-focused AV receiver boasts wireless HEOS streaming as its trump card, backed up by an entertaining, if not world-beating, performance.