As Denon prepares to unleash the astounding DVD-A1UD – the world’s first Blu-ray player to also play DVD-Audio and SACDs – we’re taking an overdue look at its first reference deck, the DVD-3800BD. This player is a cinephile’s dream, as it’s bursting with high-end video and audio circuitry and built like a tank, but as you’d expect for such a luxurious piece of kit there’s a high price tag attached – making it one for dedicated home cinema enthusiasts only.

Hauling the thing out of its box, it’s immediately clear where your money’s going. The construction is simply sublime and at a whopping 10.3kg it’s reassuringly heavy. Take a look at the exploded diagram below – every inch of the player’s complex internal layout is geared toward delivering the cleanest picture and sound quality possible. For instance, the two-layered top cover and three-layer chassis bottom help protect the circuits against vibration, while the video and power circuits inside have been separated into two independent blocks with each one mounted on its own board. 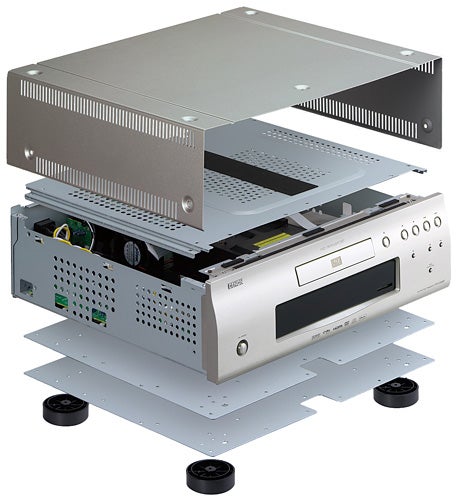 
And on the outside it looks the business too. Forget the svelte slimline shape of the DVD-1800BD – this deck is big and proud and boasts an elegantly curved brushed aluminium fascia. Our sample is black, but it’s also available in Premium Silver or Silver finishes and all of them look stunning. Set into the front panel’s wide surface area is a minimal array of buttons, giving you up-close control over disc playback, HDMI resolution and video noise reduction, plus there are both standby and on/off switches.

The rear panel boasts a suitably comprehensive selection of sockets for a high-end deck. There are two sets of component video outputs, one RCA and one BNC, plus an HDMI 1.3 port and 7.1-channel analogue audio outputs. There’s an isolated pair of analogue stereo phonos for pure audio playback, coaxial and optical digital audio outs, S-video and composite video outputs plus RS-232 and IR transmitter/receiver sockets for multiroom use.

At the heart of the DVD-3800BD’s video capabilities is Silicon Optix’s sophisticated Realta chip, which makes its debut inside a Blu-ray player. This chip’s HQV technology handles all of the key video duties like detail enhancement, noise reduction, multi-direction diagonal filtering, video upscaling, 1080i to 1080p deinterlacing and film/video cadence detection on a per pixel rather than per frame basis. The 10-bit data processing and 4:4:4 colour sampling allow it to render over 1 billion colours in 1,024 ‘steps’ and there’s also a 297MHz/12-bit video DAC on board.

Elsewhere on the spec sheet are several other performance-enhancing technologies, such as Denon Pixel Image Correction (DPIC) and Noise Shaped Video (NSV), which reduce picture artefacts and signal noise respectively, and a newly-developed Dynamic Discrete Surround Circuit – High Definition (DDSC-HD) that uses 192kHz/24-bit Burr Brown DACs for all channels and Dolby TrueHD and DTS HD Master Audio decoders. That means the deck can output these HD audio formats from its multichannel analogue outputs, which is great news if your receiver doesn’t sport HDMI inputs or you simply prefer to transfer them in the analogue domain. You can also transfer any audio format as a bitstream or multichannel PCM.


The decent feature list doesn’t stop there. We’re pleased to see multimedia support includes DivX, MP3, WMA and JPEG, which can be played back from disc or SD cards using the slot on the front panel. But despite its otherwise generous feature list, there is one disappointment – the DVD-3800BD is Profile 1.1, which isn’t great at this price and means that you can’t (and never will be able to) access BD Live features. 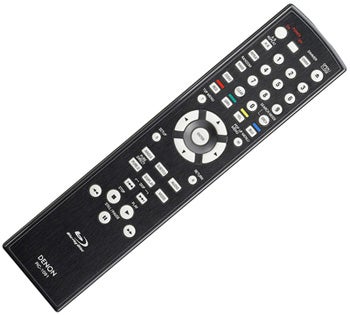 In the box is a superb remote, which isn’t cluttered up with labels like many Blu-ray zappers. It features sensibly-placed menu direction keys and provides clear easy access to most of the regularly used functions. But compared with the latest generation of Blu-ray players from the likes of LG and Samsung the Denon feels decidedly cumbersome, with remote commands taking slightly too long to register on menus and discs taking well over a minute to load up.


That said, on-screen design is impressive, with a clear setup menu that’s split into Quick and Custom modes, the latter going into a lot more detail than the former. It uses crisp graphics (including a diagram showing which remote buttons you need to press) and within the Custom menu you can easily alter all the important settings. Hit the Mode button during playback and a separate on-screen banner appears, which lets you make all the crucial tweaks that cinephiles need to get the image just right. It goes into meticulous detail, with the Gamma Correction menu even using a graph to illustrate the results of your tweaking.

All of the top-drawer technology beavering away inside results in some of the best Blu-ray pictures you’re ever likely to see. ”Hancock”, for example, is staggeringly crisp and detailed, with the Denon easily getting to grips with tricky textures like Will Smith’s stubble and clothing, or the shrubs surrounding Hancock’s hillside house.


But what sends the Denon’s pictures into the stratosphere is their punchiness and three-dimensionality – black objects look majestically deep yet lose none of their detail and colours radiate from the screen with dazzling intensity. Skin tones are beautifully judged and smoothly gradated thanks to that 10-bit processing, and the clean, hard edges give the image scintillating clarity.

Given that the Silicon Optix Realta chip was designed to tackle the sort of torture tests thrown up by the company’s HQV Benchmark Blu-ray disc, it’s unsurprising that the Denon aces the lot of them. The edges of the rotating bars on the diagonal filter tests are flawlessly smooth; HD noise suppression is second to none; plus the video and film resolution loss tests are played without flickering or strobing. It also turns in a near-perfect performance with the HQV DVD, revealing that the 3800BD is also an astonishingly good upscaling DVD player.


The player backs up this sterling video performance with amazing sound. Its fantastic HD audio decoding talents deliver an expansive, detailed and cleanly separated soundstage with ”Hancock’s” Dolby TrueHD track when the analogue outputs are rigged up to our Onkyo amp. With music CDs it’s pure audio chocolate – rich, sweet and oh so satisfying. Denon’s Advanced AL24 Processing works its magic with Erykah Badu’s ”Baduism” CD, shaping the organic jazzy soul into a thing of beauty.


In pure performance terms, the Denon DVD-3800BD is one of the best Blu-ray players money can buy, with only the latest Pioneer decks coming close to matching it. Its superb processing, high-grade components and stunning construction result in near-flawless picture quality and spine-tingling sound, particularly with music. On the downside, a player at this price should be ready for BD Live and it’s more sluggish in operation than some recent players, but if you want to see Blu-ray at its very best then we highly recommend you check out this player.