Billed as a ‘low visibility, high fidelity sound system’, Denon’s latest soundbar aims to inject sonic oomph into movies and TV shows without taking up acres of space – with a little assistance from a wireless subwoofer.

It can be installed near your TV without fuss or fanfare, and being a Denon system it’s steeped in a history of audio excellence – the sort of expertise evident in the impressive DHT-T100 soundbase, which we recently awarded a Recommended badge. We’re hoping this system can repeat its success and justify the relatively high price tag. 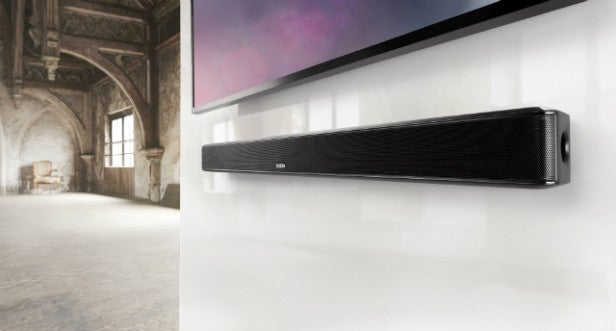 What strikes us as we unpack the DHT-S514 is its impressive build quality. Both the speaker and subwoofer feel reassuringly heavy and solidly pieced together, with no flimsiness or fragility in either cabinet, although the plasticky matt finish detracts from the overall sense of luxury.

Designed for maximum discretion the DHT-S514’s black styling is easy on the eye, tasteful and free from distracting embellishments. Covering the drivers is a simple sloping trim and metal mesh. 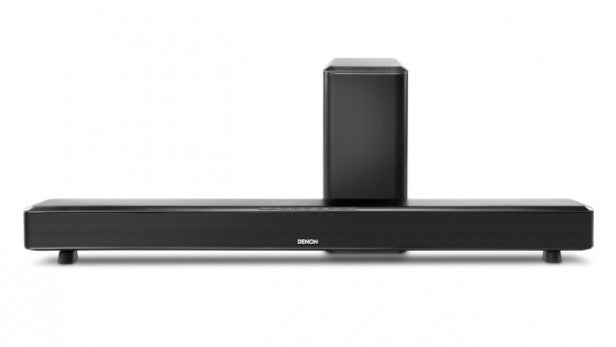 On top you’ll find a row of buttons with illuminated icons. These act as status indicators, displaying the volume level, selected sound modes and inputs.

It’s a wide speaker bar (1004mm) and is therefore better suited to TVs of 42in upwards, but with a shallow 78mm depth it won’t stick out awkwardly when mounted on the wall – a set of keyholes on the back are the simple method used for that purpose. For tabletop placement there are two sets of feet that raise the bar by either 20mm or 32mm, allowing it to be lifted over the TV stand.

The subwoofer’s styling is identical to the soundbar, with a black matt finish, sloping trim and metal mesh. The most pleasing aspect is its compact size – at 313mm high by 346mm deep it should be easy to accommodate. 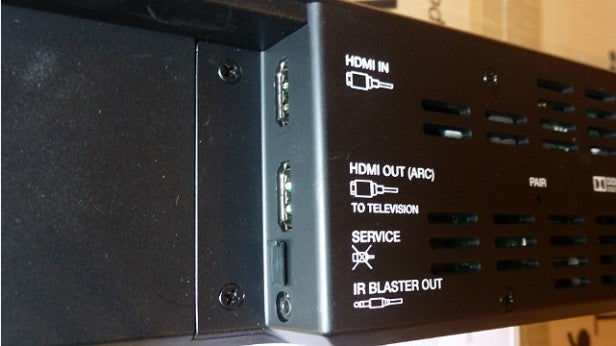 Rear connectivity is decent for the money. There’s an HDMI input and output, allowing you to pass HD and 3D pictures from a Blu-ray deck through the soundbar to a TV – although there’s no 4K passthrough, so you’ll need to connect your 4K source to the TV separately.

The output is ARC compatible, which means a compatible TV can send audio signals to the soundbar through a single HDMI lead. It’s not unreasonable to have expected more HDMIs at this price – even Maxell’s most affordable soundbases offer three – but it’s not a deal-breaker. 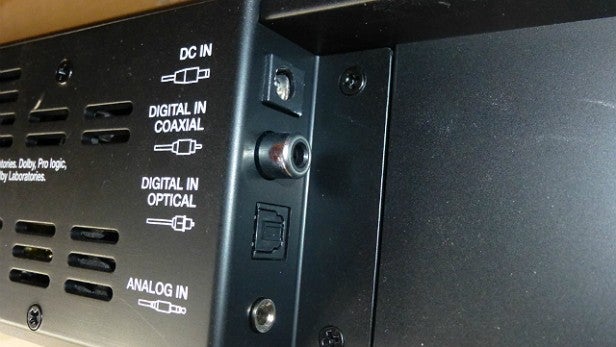 If you’d rather not faff about with HDMIs you can simply hook up your TV to the optical digital input, forming a convenient single-cable connection. It’s joined by coaxial digital and 3.5mm minijack inputs, plus a mini USB port for service use only and a port for the supplied infrared repeater, which passes through TV remote commands if the bar blocks the TV’s IR sensor.

The DHT-S514 offers all the bells and whistles you’d expect from a soundbar, such as Bluetooth streaming with apt-X, Dolby Digital and DTS decoding, Denon Virtual Surround and a few sound modes to experiment with – Dialog, Music Wide, Movie Wide and Night. 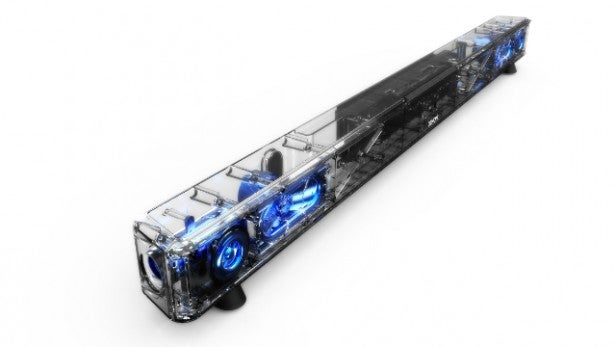 The soundbar uses a pair of two-way speakers, with two half-inch tweeters and two 2 x 5in oval midrange drivers, while the 49W subwoofer uses a pair of 5¼in drivers and a U-shape bass port. Because it’s wireless, you can put the sub anywhere in the room and it pairs with the soundbar automatically.

We had little difficulty using the
DHT-S514. You can carry out most tasks using the buttons on top of the
unit, which include keys for each input and the learning remote
function.

The
lights on these buttons also act as status indicators, taking the place
of a front LED readout – more convenient for adjustment, less so for a
quick glance from the sofa. For example, they line up in a row to
represent the volume level, and form different patterns when toggling
through the sound modes. Sure, it lacks the clarity of an LED display
but it doesn’t take long to get your head round.

The
remote is superb too, both in terms of usability and build quality. The
rubber finish gives it a high-quality feel, and we like how the buttons
are flush to the surface. They’re clearly marked with symbols that
leave no room for confusion.
Considering
how bad some soundbar remotes can be, Denon has done a great job here,
but if you’d rather stick with your TV’s remote then you can programme
the DHT-S514 to learn its commands.

With
Star Trek Into Darkness, the Denon’s powerful sound easily does justice
to the movie’s blockbuster action, lending the soundtrack satisfying
scale, weight and volume. It’s not perfect, but delivers excitement in
spades and fills the room in ways that today’s TVs can only dream of.

When
Harrison takes out Starfleet HQ, the explosions sound solid and punchy
thanks to some thumping bass work from the subwoofer, while flying
debris, shattering glass and blaster shots fizz from the speakers. It’s
forceful and dramatic, with big dynamics and plenty of bite.

Although
limited by a lack of real surround speakers, the soundstage feels
expansive. It’s far from surround sound but there’s a good spread with
Movie mode selected – dialogue, effects and music are spaciously
arranged across the front soundfield.

Treble is clean and smooth
at all times – never harsh or bright – and it digs out a decent amount
of detail, down to the sibilance in speech and the top end of the
score’s brass section. It falls some way short of the subtlety and
silkiness of soundbars like the Monitor Audio ASB-2 or even the Wharfedale Vista 100, but everything sounds crisp and lively. 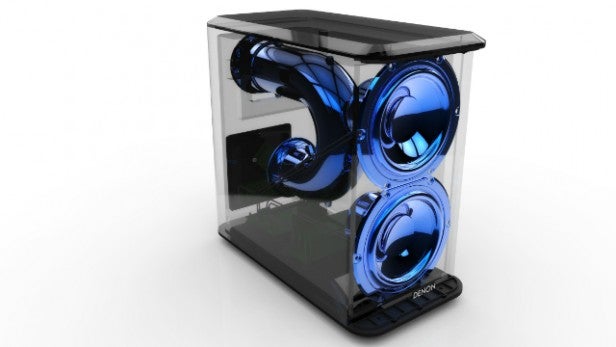 The
wireless subwoofer does a great job too, lending slam to sudden jolts
and making volcanic explosions sound huge. It can’t be pin-pointed to a
particular spot either. On the downside, a little less overhang wouldn’t
go amiss and if you push the volume too high it can stifle the soundbar
– go steady with that dial.

We also feel that dialogue could be
louder and clearer. During Star Trek and TV shows we struggled to hear
key sections of speech, particularly when there’s a lot going on around
them.

This is highlighted when watching TV game shows – we
increased the volume to hear the talky bits, but then the blasts of
music between rounds were too loud. We were constantly fiddling with the
levels instead of enjoying the show, and Dialog mode didn’t solve the
disparity either. But the richness and depth it brings to theme tunes
and dramatic scenes is undeniably impressive.

Flick the DHT-S514
into Music mode and you get a rich and detailed performance when you
beam tracks from a Bluetooth device. Marvin Gaye’s Trouble Man
soundtrack sounds tight and funky, with crisp percussion, well-rounded
vocal tones and much better control in the low frequencies. 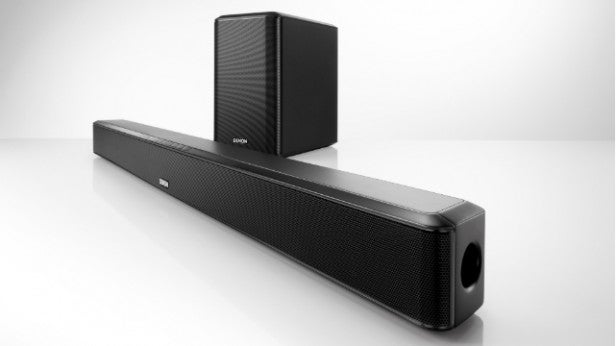 With its room-filling sound, solid build and generous features, the DHT-S514 is an undeniably impressive soundbar.

It
doesn’t quite blow us away like a £400 soundbar should – we expected
clearer dialogue and a little more subtlety in the high frequencies,
both of which you get from Wharfedale’s more affordable Vista 100 – but
its big, entertaining performance will win it many fans.

The
Denon’s trump card is power, thanks to a muscular subwoofer that adds
drama and scale to both movies and TV shows. It could be a little
tighter perhaps, but it certainly fills a room and knocks rivals like
the Pioneer SBX-N700 into a cocked hat.

What’s
more the Denon is easy to install and even easier to use, and its
tasteful black styling makes it a classy sonic centrepiece.

It’s
not perfect, but Denon’s soundbar and sub deliver a big, weighty sound,
backed up by decent connections, handy features and simple operation.