If creating a surround sound system from separates seems too much like hard work, and you want better sound quality than you get from a one-box Blu-ray system, then Denon’s DHT-1312XP might be the perfect solution. It’s an AV receiver and 5.1-speaker system combo that aims to bring you Denon’s famed sound quality in a single affordable package – just add a Blu-ray deck and you’re ready to roll. 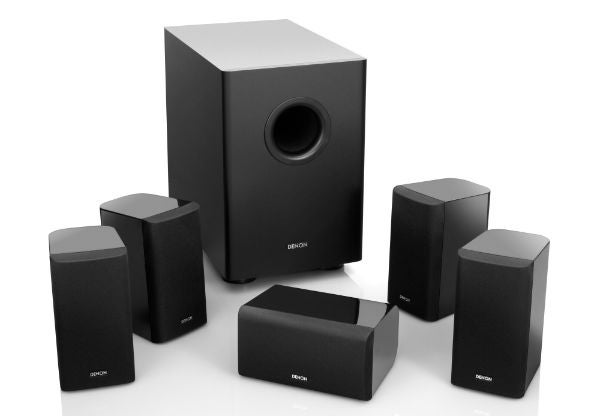 For under £400, the DHT-1312XP pairs Denon’s current entry-level AV receiver, the AVR-1312, with its SYS-1312 5.1-channel speaker system. Considering the AVR-1312 alone costs £250 and upwards online, it’s looking like a great deal already. Among the system’s many talents is full 3D passthrough capability thanks to its HDMI v1.4 sockets, Blu-ray HD audio support and an onscreen user interface.

Because of the low price, both build quality and aesthetics are a little below par, but that’s inevitable. It’s still perfectly pleasant to look at though. The AVR-1312’s unpretentious black finish and clean lines allow it to blend in with other black boxes in your system, and for an entry-level product it’s incredibly well built, boasting sturdy, vibration-resistant aluminium bodywork and robust controls on the front panel. These include four ‘Quick Select’ keys that offer easy access to connected sources, plus buttons that control the radio tuner and an iPod. You’ll also find composite, analogue stereo and 3.5mm minijack inputs.

The SYS-1312 includes four identical SC-F1312 satellites for the front and rear channels, an SC-C1312 centre and the DSW-1312 subwoofer. The bookshelf satellite speakers are fairly large compared with sats from KEF and Cambridge Audio and their shape is unremarkable, but the gloss black finish looks great, with a cloth grille covering the front. However, pick one up and the cabinet feels light and sounds hollow when tapped, but again that’s the nature of the budget beast.

Talking of beasts, the subwoofer’s big and bulky cabinet might make it tricky to hide away in a corner, but the downward-firing, front ported box is styled in a neutral black finish and build quality is solid. The centre speaker is the same size and shape as the fronts and rears but turned on its side for ease of installation.

The AVR-1312’s connections are limited due to its entry-level positioning, but the provision of four HDMI inputs and one output – all v1.4 – should be enough for undemanding setups. Inputs include two digital audio (one coaxial and one optical), three analogue stereo, two composite video and one S-video.

Inevitably the AVR-1312 lacks the superstar line-up of features found on the AVR-1912. As the lack of an Ethernet port reveals, there’s no network functionality – that means no DLNA media streaming, internet radio or access to music services. There isn’t even a USB port for playback from local memory devices.

There are, however, a few attractive features, including support for all types of 3D signal, HD audio decoding (Dolby True HD, DTS HD Master Audio) and a few sound modes. The Compressed Audio Restorer is designed to enhance the quality of digital music formats like MP3 and WMA, while you’ll find multichannel stereo, Virtual Surround, Pro Logic IIx and DTS Neo:6 for expanding stereo sources.

The AVR-1312 does not offer video upscaling through the HDMI port, but it’s so common among Blu-ray players and TVs that you probably won’t miss it. The HDMI sockets handle video types up to 1080/24p, as well as SACD (DSD) signals, all types of Dolby and DTS bitstreams, Deep Colour and xvYCC.

The receiver musters a claimed 75W per channel at 8ohm, a respectable amount of welly. As for the speakers, the satellites and centre feature a single 8cm full-range driver inside a closed box. It’s a tad disappointing that they’re not a two-way design with separate midrange driver and tweeter, but with a quoted frequency range of 150Hz – 20kHz they seem versatile enough. 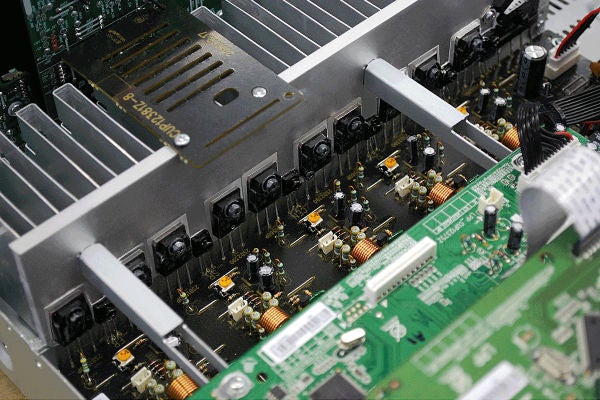 The subwoofer features a built-in 100W amplifier and a 20cm cone woofer. Thankfully it’s an active (powered) model, which usually offer superior performance to passive subs. On the back of the unit is a volume dial, line input and power switch, but no crossover frequency control to help you integrate it with the satellites – that’s found in the onscreen setup menu, which we’ll come to in a moment.

Setting up the system was not a pleasant experience. It comes with a set of cables, which is fairly important for a system aimed at newcomers who want everything in one hit, but they’re thin and therefore difficult to thread into the binding posts on the back. They bend and fray, and even when clamped down it’s quite easy to yank them out by accident.

There’s no automatic calibration either, which means you need to adjust speaker performance manually in the setup menu. Thankfully this isn’t too complicated, but auto calibration is so entrenched in the AV receiver experience these days that it feels strange not using it. 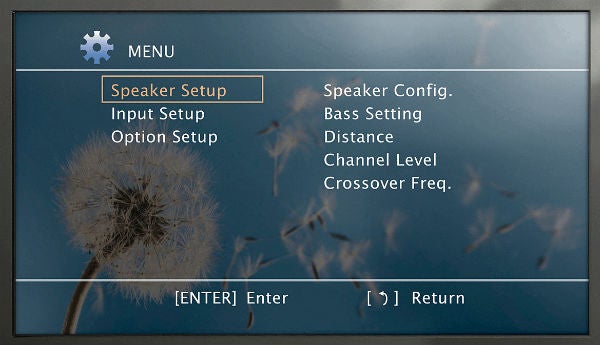 Things get much better when navigating the onscreen menus. They’re not flashy or colourful, just simple lists crisply superimposed over the picture. The cursor moves around speedily and the submenu structure is sensible.

The first screen is broken down into Speaker, Input and Option Setup. Within the Speaker setup menu, you can set the crossover point for the subwoofer, front, centre and surrounds (between 80Hz and 250Hz for the sub, 40Hz and 250Hz for the sats) as well as the size, distance and levels. Our only gripe is that you can’t use the direction keys to go back and forth between menus, you have to hit Enter and Return every time.

The remote is excellent, sporting a stripped down set of buttons to assist beginners. The volume and menu controls are perfectly placed, with good use of labels and icons. Dedicated buttons for Channel Level, Tone Control and Restorer provide faster access to these key audio adjustments, plus iPod controls are provided at the bottom.

Although the DHT-1312XP lacks the finesse and smoothness normally associated with Denon products, newcomers to home cinema are likely to be pleased with its lively, room-filling sound. The chaotic climax of Transformers: Dark of the Moon is reproduced with relentless energy and fierce dynamics, particularly when Optimus and Sentinel Prime start bashing the nuts and bolts out of each other.

Optimus’ final, lethal blow to Sentinel packs a huge, powerful punch, while the clanging, crashing sound of metal on metal throughout the scene just stays the right side of abrasive. The system’s muscle and expansiveness create an impressive sense of scale, but with effects accurately placed within the soundstage. There’s an urgency and immediacy behind its presentation that demands your attention.

It’s a world away from the smoother, more restrained sound of the AVR-1912 – this system is a crowd-pleaser, designed to deliver a more instant visceral hit, and there’s no shame in that.

But as a result the sound is a little too brash, particularly at louder volumes when the relentless brutality can be too much to digest for long periods. It also lacks a touch of composure and openness in scenes that need it, not really giving individual sounds enough room to breathe.

It also means that much of the robots’ dialogue is spat out rather than spoken, although intelligibility isn’t greatly affected and there’s wonderful depth behind the voices.

The subwoofer is potent and reasonably agile, lending considerable bass weight to the soundtrack, but the volume level and crossover point need careful tweaking as it’s very easy for the sub to overpower the satellites and draw undue attention to itself. A ‘less is more’ approach works best.

During quiet scenes the speakers miss out some of the finer high-frequency detail that may have been resolved with separate tweeters and midrange drivers, but shots of Megatron exiled on the African plains are enveloping and atmospheric, with crickets chirping clearly from the surround speakers.

Verdict
So what have we learned from the DHT-1312XP? Well, if you’re looking for movie playback with subtlety, refinement and intricate detail insight, you’d better save your pennies for one of Denon’s midrange amps and a better speaker system.

But if you want a home cinema system that smacks you round the face from the word go with its power and energy, then it might be right up your street. The AVR-1312 and SYS-1312 fill the room with a dynamic, if brash sound, with decent bass depth (after careful tweaking) and an immersive soundstage.

The AVR-1312’s spec sheet is sparse, but four HDMIs with full 3D support are welcome and the onscreen menus make it easy to operate, although be prepared for a fiddly setup procedure if using the supplied cables.

The DHT-1312XP’s greatest virtues are its price and convenience, bringing you a complete surround sound system in one hit, something that’s bound to win it plenty of fans regardless of how it performs.