The DBP-2010 is Denon’s latest ‘affordable’ Blu-ray player, and we use those inverted commas with good reason. Its £600 suggested selling price will seem pretty steep to most people, but in Denonworld – a place where a Blu-ray player can set you back as much as £4,500 – that’s practically peanuts. The question is, can Denon justify asking that much with so many excellent players out there costing a fraction of the price? Let’s find out…

As ever, the bodywork is first to come under scrutiny and we’re pleased to say it gets a clean bill of health. There’s an unwritten rule that the higher the price tag, the chunkier the player, and at 106mm tall the Denon cuts a rather portly figure. But it carries its bulk well with an elegant brushed fascia that curves gently towards the top and a choice of Premium Silver and Black finishes, both of which look classy (we tested the black one), although the Marantz BD7004 is a little prettier and more robust.


The DBP-2010 also boasts a rigid, multi-layer chassis to suppress vibrations and a dual-layer metal top cover, which is what you expect from a Denon deck and puts the price tag more in context. The fascia is quite busy, with buttons governing playback and HDMI resolution and an SD card slot. The wide display panel gives you a helpful array of information too, which means you don’t have to rely on onscreen displays to find out how much longer you have to sit through rubbish films.

The back panel features a healthy set of sockets, most notable of which are the multichannel audio outputs that fans of old-fashioned analogue (and people without HDMI-equipped receivers) will no doubt embrace. Thanks to the deck’s built-in audio decoding of Dolby TrueHD and DTS HD Master Audio, you can pass glorious hi-res sound to any amplifier.


Of course, you also get an HDMI v1.3a output that spews out 1080/24p digital video and audio tracks as a raw bitstream or unpacked PCM. Component and composite video ports complete the video line-up, while coaxial and analogue stereo outputs provide something to fall back on if your receiver isn’t equipped to handle HD audio for any reason.

Those hoping to integrate this deck into a custom installation will welcome the RS232C and remote control in/out jacks, and if BD Live’s your thing the Ethernet port will be your best friend. But those of us with wireless Internet routers (which is quite a lot these days) will have to stick with the wired connection we’re afraid, as Denon hasn’t yet ventured into the brave new world of Wi-Fi connectivity.


Nor has it bothered to fit the DBP-2010 with the 1GB of memory needed to store BD Live downloads, which means you’ll need to keep an SD or SDHC card inserted with at least that capacity. On the flipside, when you’re not downloading new commentaries and trailers you can use this slot to play back movies, music and photos – the deck accepts MP3, WMA, JPEG, hi-def AVCHD and most pleasingly of all, DivX HD.


Everything about this player, from the manual and remote to the onscreen menus, socket layout and spec, is virtually identical to the Marantz BD7004 player we tested recently, and as we pointed out in that review it’s an inevitable symptom of the two brands’ shared parent company, but you’d have thought they’d want to give them a little more individuality.


Like the Marantz, day-to-day operation is easy enough, but a few niggles rain on the parade. You can’t access the setup menu without stopping the movie first, and because most discs won’t let you resume from where you left off, serial tweakers might find this frustrating. Certain functions like disc scanning are a bit slow off the mark after you press the button on the remote. 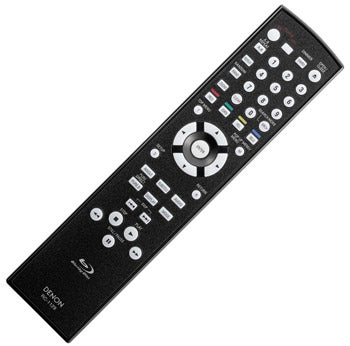 Onscreen menu design is attractive and logical – once again you can choose between Custom and Quick menus, depending on how much depth you want to go into. A separate banner appears discreetly at the top of the screen when you hit the Mode key, providing access to the picture adjustments (Contrast, Colour, Gamma Correction, Brightness, Sharpness) and a perfunctory virtual surround mode.


We’ve no major grievances with the remote, apart from the playback keys which are a bit too low and force you to readjust your hand every time you move to and from the menu controls. But as we said, nothing worth getting worked up about, and the rest of the keys are helpfully arranged and easily recognisable. Although similar to the Marantz BD7004’s zapper, this one lacks the extra buttons for controlling other Denon kit.

Onto disc loading, and there’s absolutely no urgency whatsoever. The ”Spider-Man 3” test unsurprisingly produces similar results to the Marantz, taking around a minute to reach the Sony Pictures screen, and there’s also an unreasonably long pause when ejecting a disc. Denon really needs to speed things up on the next generation.


But these gripes aside, the DBP-2010 sure knows how to produce a fine-looking Blu-ray picture. With the 1080/24p mode selected your eyes are bombarded with a procession of vivid, realistic colours and blisteringly sharp detail, emphatically demonstrated by our ”I Am Legend” disc. The Denon sets its stall out from the start, reproducing the complex opening shots of New York with the sort of depth and intense sharpness that’ll instantly convert any Blu-ray non-believers in the room. Shading is nuanced, skin tones look natural, shadow detail is clear and there’s a general punchiness and solidity to the picture that’s hard not to fall in love with.


And it doesn’t matter if the scene is light or dark, as the Denon displays both with admirable clarity. During shots of Will Smith curled up in the bath, or the tense scenes inside dark derelict buildings, we could clearly see what was going on thanks to the terrific black levels. 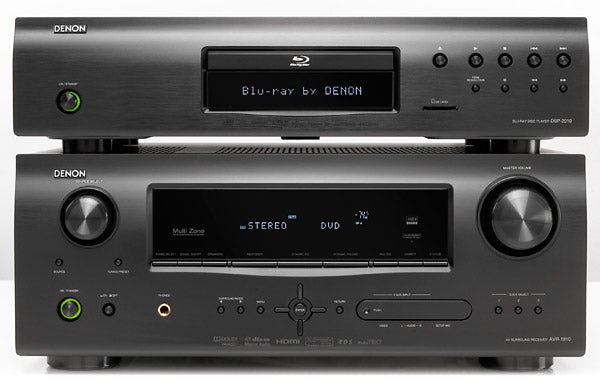 
The DBP-2010 demonstrates a high level of composure with the Silicon Optix HQV disc too, passing all of the tests except for the Video Resolution test pattern, which – surprise, surprise – shows the same flickering artefacts on some of the striped boxes as the Marantz deck.


DVD playback is magnificent – the fast frenetic battle scenes at the start of ”Gladiator” are conveyed with smooth motion tracking, clean edges and a pleasing lack of artefacts.


We’d also recommend this player if you’ve a keen ear for music, as CDs sound great through the dedicated analogue stereo outputs. It’s characterised by sparkling detail and irrepressible energy, but accompanied by a richness and warmth that you don’t get from many budget players. And we can’t fault the sound quality of movie soundtracks decoded internally and played through the multichannel analogue outputs either, making this an all-round sonic superstar.


Although it gives us a distinct sense of deja vu in most areas, the DBP-2010 is a likeable deck – picture and sound performance are nigh-on flawless, DivX HD playback is a bonus and on the outside it boasts the sort of sturdy construction you expect from players at this price.


What you don’t expect, however, are the tedious Blu-ray reading times and the absence of features that will soon become Blu-ray staples, such as built-in Wi-Fi, network capability and built-in memory. So on that score it doesn’t represent particularly good value for money (just like its Marantz stable mate), but if you’re still tempted then rest assured that it’ll make your hi-def discs look and sound great.