The AVR-X1200W is the most affordable network AV receiver in Denon’s current range and is available exclusively from Superfi. It’s a 7.2-channel unit with built-in Wi-Fi, Bluetooth, AirPlay, Spotify Connect and Dolby Atmos; DTS:X will be added with a future firmware update. That already sounds like incredible value for £300 – let’s find out how it performs.

The AVR-X1200W’s design is more functional than frivolous, opting for a classic black-box approach. But as black boxes go, it’s a good-looking one – the fascia has a lovely brushed finish and there’s a pleasing lack of clutter.

It’s surprisingly light and compact for an AV receiver – a far cry from the back-breakers higher up Denon’s range – but its build quality is absolutely superb. The aluminium bodywork is firm and resilient, giving those internal electronics a sturdy base from which to work.

Two large dials adorn the front panel, one for volume and one for source selection. A slim display panel offers a single line of text for inputs, track names and other status messages. A row of buttons sits underneath, allowing you to access radio presets and four Quick Select inputs. 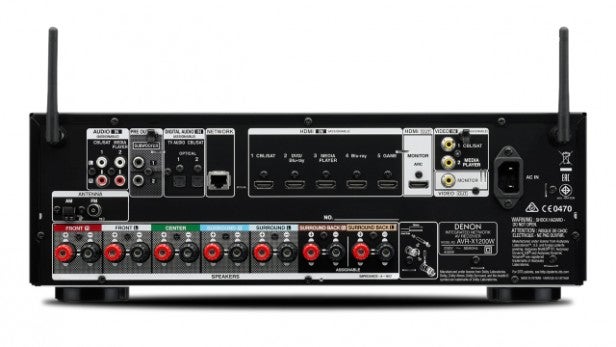 Front sockets comprise a headphones output, HDMI input and a USB input. On the rear are five more HDMI inputs, all of which support 4K/60Hz, 3D and, for the first time on a Denon receiver, HDCP 2.2. The HDMI output is ARC-enabled, which means a compatible TV can send audio to the Denon through the HDMI cable.

Denon doesn’t go overboard with other sockets – this is a budget model, after all – but the two optical inputs and two analogue RCA inputs should suffice for most users. They’re joined by two subwoofer pre-outs and two composite video inputs.

The AVR-X1200W is well equipped on the wireless side. With built-in Wi-Fi and Bluetooth, there’s no need to worry about hooking up dongles or cables, and with dual Wi-Fi antennas, a robust reception is all but guaranteed – even with many other devices vying for bandwidth. An Ethernet port is provided for those who want a more stable method for hi-res file streaming.

There are seven pairs of speaker terminals on the rear of the unit, two of which can be used to connect surround back channels in a traditional 7.1 setup, or they can be used as height channels in a Dolby Atmos or DTS:X 5.1.2 system.

Alternatively, one set of surround back terminals can be used to drive speakers in a second zone – with its own independent source – while listening to 5.1 in the main room. But if you don’t want to compromise your seven-channel setup, you can hook up the Zone 2 pre-outs to a separate stereo amp and continue enjoying 7.1 in the main room.

With such an extensive feature list, the AVR-X1200W doesn’t so much make a mockery of the £299 price tag as yank its trousers down and nick its dinner money.

The standout feature is Dolby Atmos support, which lets you install overhead speakers – either upward-firing or ceiling-mounted – and add a sense of height to movie soundtracks. Allied to this is support for DTS’s rival system, DTS:X, which isn’t enabled out the box but will be added with a future firmware update. 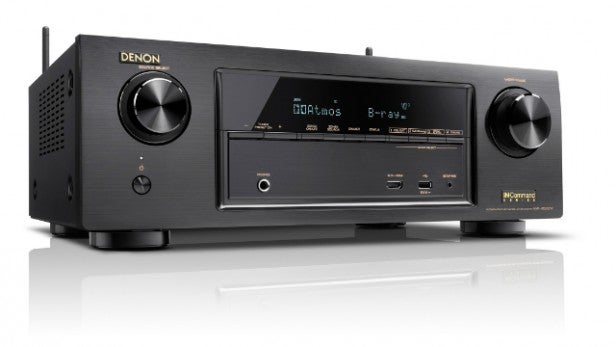 Connect the Denon to your home network and you can stream music via Apple AirPlay, DLNA, Spotify Connect and internet radio. The Denon also allows high-resolution DSD, FLAC, ALAC and AIFF streaming, up to 192kHz/24-bit for FLAC and WAV, and 96/24 for ALAC.

The AVR-X1200W is a 7.2-channel receiver, with a power rating of 145W per channel. It uses 192kHz/24-bit DACs for all channels and an advanced Quad-Core 32-bit processor for smooth multi-tasking. You’ll also find plenty of sound modes to suit any content, including the ever-useful All Channel Stereo.

It’s also equipped with Audyssey’s Silver processing suite, which includes MultEQ XT auto-calibration (discussed in the next section); Dynamic EQ, which automatically optimises the tonal balance; and Dynamic Volume, which smoothes out jarring jumps in volume.

Denon has installed a Setup Assistant that guides you through every step of the process – even down to obvious stuff such as hooking up a Blu-ray deck and connecting speaker cables. Seasoned AV users can skip it, but the basic but helpful on-screen graphics and clear instructions will be a godsend for newcomers.

The Denon also walks you through Wi-Fi setup and Audyssey MultEQ auto-calibration. There’s a microphone in the box that connects to an input on the front panel. The receiver plays a series of test tones, which are picked up by the mic and used to calculate the optimum settings. It sets the levels and distances for each speaker, as well as applying correction to compensate for your room’s acoustics. It takes measurements from up to eight positions, but you can stop after three. The whole process took about 10 minutes.

Owners of Apple devices running iOS 7 and above can set up the wireless connection simply by sharing their device’s settings at the push of a button.

On-screen presentation isn’t exactly pretty, but gets the job done. Most of the menus use blocky white text over a black background, giving off a definite ZX Spectrum vibe, but this simplicity is actually quite refreshing. There are a few icons and splashes of colour here and there, but in general this is a no-nonsense user experience.

However, when it comes to sheer usability the Denon nails it. The menu cursor moves around the screen quickly, while the contextual Options menu and handy shortcuts make it easy to find the option you’re after.

The Denon’s quick operating speed is a blessing when playing music from a NAS drive, scrolling through my list of 946 albums without hesitation. The page up/down buttons help you find the music you want quickly, while the Text Search feature finds songs by keyword in seconds.

The light and plasticky remote doesn’t quite match the quality of the main unit, but it’s easy to use. The buttons are helpfully laid out, with all the input keys grouped at the top and a well-placed direction pad for easy menu navigation. The low button count keeps clutter to a minimum.

It’s complimented by a remote app that allows you to control the AVR-X1200W with a smartphone or tablet. The eye-catching homescreen allows you to adjust the volume or select an input by tapping the relevant icon.

Select the Media Server option and you can explore music on NAS drives and other devices. The menus are attractive and logically organised.

Fire up Jurassic World on Blu-ray and the AVR-X1200W delivers the disc’s DTS HD Master Audio soundtrack with aplomb. The price tag and power rating may be relatively modest, but it has no trouble driving a big, powerful speaker system – in this case, a £5k Monitor Audio Gold setup.

The Denon is an agile, exciting performer, lending considerable heft and scale to the movie’s big action scenes. When the T-Rex takes on Indominus Rex in chapter 18, their dino-roars sound huge and ferocious, demonstrating the Denon’s considerable power reserves.

There’s plenty of attack as they snap their jaws shut and smash up the scenery, but the full-bodied mid-range prevents these effects from sounding thin or spiky.

It’s an entertaining listen, throwing itself wholeheartedly into dynamic shifts and showing great sonic dexterity as it pings effects around the room. The soundstage is large and immersive, with accurate placement of rear effects and smooth steering between channels.

But all this power and energy doesn’t come at the expense of detail. The Denon imbues every scene with crisp, natural-sounding treble – the rustle of footsteps on a dusty floor or the gruesome crunch as dinosaurs feast on their prey, for instance. This detail also seeps into voices, giving them lots of texture.

At the other end of the spectrum, the AVR-X1200W doles out lashings of punchy bass, reaching down deep and giving the subwoofer plenty to cling onto. There’s a big rumble as the Mozasaurus flops out of the water and chomps the Indominus.

The Denon continues its great work with Dolby Atmos discs. When Optimus Prime dukes it out with Galvatron on the freeway in Transformers: Age of Extinction, missiles and objects fizz overhead, giving the scene a convincing sense of height.

Listening to music through the AVR-X1200W is an effortless experience thanks to its refined presentation and smooth, easy tonal balance.

There’s excitement and agility in spades, while outstanding detail reproduction makes vocals sound nuanced and intimate. The funky drums in “Brawling Broads” by Roy Ayers on CD are reproduced with metronomic timing and lock tightly to the deft bassline, while Ayers’ vibes solos are rendered with a glassy ping.

Streamed over a network, hi-res stalwart “Get Lucky” by Daft Punk sounds superb – the Denon’s tight, weighty treatment of the drums and bassline gets the feet tapping, while the cymbals, guitars and vocals sound clear and natural. Getting this level of musicality out of such an affordable receiver is an impressive feat.

With its top-drawer feature list and powerful, articulate performance, the AVR-X1200W goes above and beyond what you should expect from a budget receiver.

Getting Dolby Atmos, DTS:X, Wi-Fi, Bluetooth and AirPlay from a £300 receiver is incredible value in itself, but the fact that it delivers such sweet sound quality really seals the deal. What’s more, it’s a doddle to use and build quality is excellent – do yourself a favour and stick it on your shortlist.

The AVR-X1200W is the epitome of great value, bringing you a wealth of features, exciting performance and classy design for a very appealing price.