Denon calls the AVR-1912 its ‘everyceiver’, which is market-speak for its ability to play music from a wide range of sources. So whether your tracks are stored on USB stick, iPod, iPhone, disc, PC or NAS drive, you can access them all from the AVR-1912 thanks to its wide selection of sockets and DLNA-certified network functionality. Excitingly, it’s even equipped with AirPlay, which makes it even easier to stream songs from Apple devices or PCs running iTunes.

It’s a 7.1-channel receiver, with 90W of discrete amplification per channel, and sits above the entry-level AVR-1312 and step-up AVR-1612 in Denon’s range. At around £350, it’s Denon’s most affordable network-capable receiver to date, although with stiff competition from the likes of Onkyo and Yamaha it’ll take more than a tasty price to earn its place in your AV rack. Let’s find out if it cuts the mustard.

Although it’s trumped by stable-mate Marantz in the design stakes, the AVR-1912 is still a relatively dapper piece of kit. The subtly curved fascia and black finish work well, and overall build quality is superb, carefully constructed to curb unwanted vibration – the scourge of audiophiles everywhere.

Denon has also kept the fascia reasonably low on clutter, with only the most important buttons granted a place – these include four ‘Quick Select’ buttons and internet radio preset keys. Look closely and you’ll also see a row of input select buttons discreetly lined up along the bottom of the large display panel. Front-mounted sockets include composite/analogue stereo inputs, headphones port and a USB port for direct playback from iPods/iPhones and USB storage devices. There’s no front HDMI port though.

The AVR-1912 is relatively light on connections, although compromises were always likely at this price. Thankfully Denon hasn’t skimped on HDMI inputs, offering six v1.4 ports plus a single ARC-compatible output. You only get two digital audio inputs though (one optical, one coaxial) and there are no multichannel analogue inputs or pre-outs (apart from the subwoofer output). We expected more video sockets too – all you get are two composite and one component input, plus an S-video port for Denon’s iPod dock. Five analogue stereo inputs, Ethernet and plastic binding posts complete the line-up.

The AVR-1912’s v1.4 HDMI sockets make it ready to pass 3D pictures to a compatible TV, decoding HD audio soundtracks along the way. The unit also supports HDMI video conversion and deinterlacing, but sadly it won’t upscale SD sources to HD resolution. Although it’s not essential, as most displays and players can upscale to 1080p these days, it does make the AVR-1912 seem dinosaur-like in comparison with Onkyo’s TX-NR609, which offers 4K upscaling.

The Denon does, however, bring you an impressive array of networking features. AirPlay is the obvious star of the show, allowing you to play music from Apple devices or a PC/Mac running iTunes to the AVR-1912. This can be done over your wireless network, although the Denon itself needs to be connected using a LAN cable as there’s no on-board Wi-Fi or optional dongle. 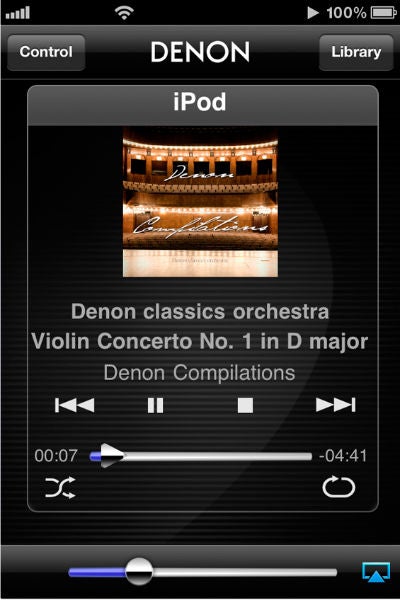 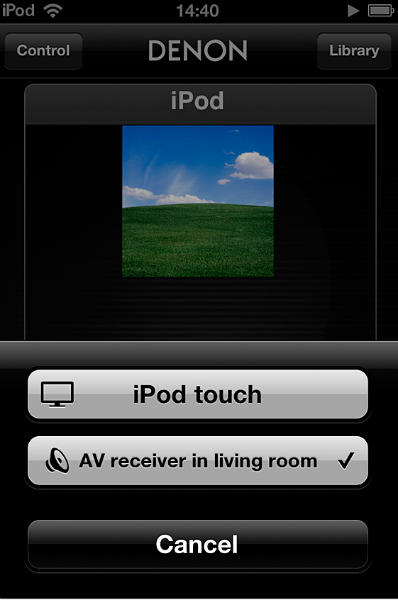 The AVR-1912’s Apple-centric outlook continues with news that owners of an iPhone, iPod Touch or iPad can control the Denon wirelessly over their network with the relevant app, which is great if you want to keep remotes to a minimum.

The AVR-1912 also allows you to stream internet radio, Last.fm, Napster and Flickr, as well as music files from DLNA devices on your home network. It supports a clean sweep of music formats, including MP3, WMA, AAC, FLAC HD and WAV, plus it’ll also display JPEGs. These formats can also be played back from USB devices.

Elsewhere the AVR-1912 decodes all the soundtrack formats you’d expect from a midrange amp – Dolby True HD, DTS HD Master Audio, Dolby Digital Plus – plus it throws in Dolby Pro Logic IIz for good measure. This, alongside the presence of an assignable power amp, means you can add front height channels to your setup instead of surround back speakers. Alternatively you can use the assignable power amp for bi-wiring or to drive zone 2 or ‘B’ front speakers.

The SHARC 32-bit floating point DSP chip opens up a range of sound modes designed to add extra flavour to music, such as Rock Arena, Jazz Club, Matrix and Virtual, but after a quick flick through you’re better off sticking with Stereo or Multichannel Stereo. Two Movie modes are also included – Mono Movie and Virtual.

Additionally you get Cinema EQ, which corrects over-emphasized high frequencies to make them easier on the ear, and Audyssey Dynamic Volume, which offers real-time volume level adjustment to keep it consistent and prevent any nasty surprises.

Those are the highlights – dig deeper and the AVR-1912 offers up a wealth of less glamorous functions that aim to make your home cinema life a little easier.

Denon has clearly worked hard at improving the user-friendliness of this year’s AV receivers, and in most areas the AVR-1912 is a doddle to operate. Key to this is the presence of onscreen menus, which make everything more accessible than front-panel operation. 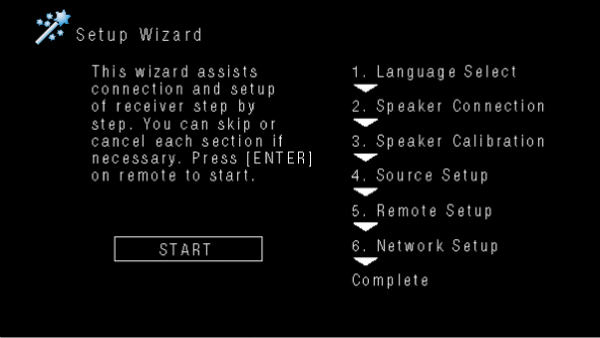 Another bonus is the Setup Wizard, a step-by-step onscreen installation guide for all the crucial settings using easy to follow graphics and text. It covers language, speaker connections/calibration, plus source, remote and network setup. But more experienced users can hit the MENU button and go through the sound settings with a fine-toothed comb. 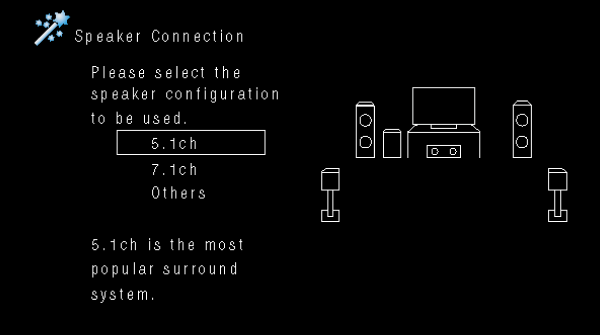 Onscreen presentation is a mixed bag – the setup menu, for instance, looks basic and dated, but does a decent job. The use of white text on black backgrounds for the menus makes them easy to follow and the left-to-right list structure is logical.

Yet the USB/network media playback menus look fresher and more modern, with sharper graphics and text. Navigating through your content is fairly easy, but as we find with many network-enabled devices it can be a chore to search for a particular track if your library is large. 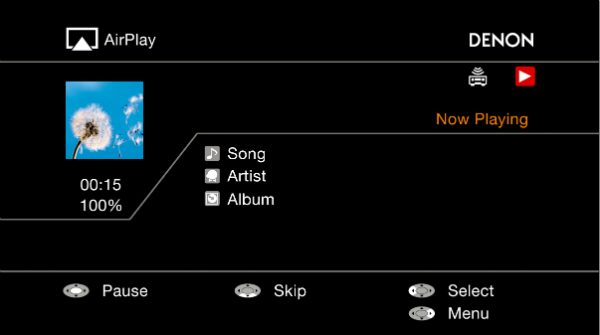 We also found it initially difficult to find our PC in the Media Server menu, despite the rest of the network functionality working OK, but got there in the end. Also playback from our USB stick proved glitchy, getting stuck trying to play certain files we hadn’t selected in the first place. It also kept freezing and defaulting to the network menu after selecting ‘USB’ in the source selection menu.

Elsewhere the prognosis is more positive. AirPlay works beautifully, streaming for long periods without a single drop-out, while internet radio and music streaming sites were similarly slick. The iPad remote control menus are intuitive, plus you can change settings and control the unit through your PC if need be.

The setup process is also simplified by the inclusion of Audyssey’s automatic calibration mode, MultEQ XT, which takes measurements using the supplied microphone and sets the audio parameters accordingly. It takes measurements at up to eight points and subsequently tweaks the acoustics to suit your listening environment, offering continuous frequency correction afterwards to ensure that these results are maintained.

Finally a word on the remote, which is mostly cooperative, but the cluttered layout takes the shine off an otherwise decent zapper. On the plus side there are Quick Select buttons for instant access to favourite sources with your preferred settings. The brushed finish is a pleasant aesthetic touch and glow-in-the-dark keys are useful.

What the AVR-1912 lacks in operational slickness it makes up for in performance, with a sound that’s richer and smoother than a cup of Nescafe Gold Blend. But that smoothness doesn’t translate into excitement, not when compared with the rip-roaring thrills offered by Onkyo’s latest models, or even the Marantz NR1602.

Listening to The Dark Knight on Blu-ray, there’s plenty of bass weight, with the barrage of booms and bangs sounding deep and tightly fused to the rest of the sound. Effects are cleanly and enthusiastically presented, while the Denon steers effects around the room with admirable accuracy and speed.

But when you’re looking for it to really rip the roof off – when The Joker blows up the hospital, for example, or during the breakneck bike chase through Gotham’s streets – the Denon’s inherent politeness dampens the dynamic punch of the roaring engines and bazooka blasts. That’s not to say it’s poor, far from it – everything is relayed with the sort of effortless  composure and crispness we’ve come to expect from Denon, but it lacks the wow factor offered by some of its midrange rivals.

But keeping with the positives, the AVR-1912 has a masterful way with words – dialogue sounds clear and full-bodied, with no sibilance. The Joker’s evil growl is perfectly captured, likewise Batman’s roaring tones, and it even makes Jim Gordon’s moustachioed mumblings audible. Add to that some dazzlingly detailed high-frequency reproduction, and remarkably grown-up music playback, and you’ve got yourself a very impressive performer that would be a shoo-in for your cash if it existed in a vacuum. As it stands though, other models offer greater excitement.

Verdict
Onkyo must be a real thorn in Denon’s side right now. If it weren’t for the mind-blowing feature list and thrilling performance offered by the brilliant TX-NR609, we’d now be hailing the AVR-1912 as the ‘everyceiver’ to beat in the midrange market.

As it stands though, the Onkyo trumps the AVR-1912 on every level, offering loads more features, more connections, a smoother user experience and a more exciting sound with Blu-ray soundtracks. But judged in its own right, the AVR-1912 is still an impressive beast, and in AirPlay it offers the one thing Onkyo lacks, which might just be the deciding factor for hardcore Applephiles.