Denon’s wide range of AV receivers has something for everyone, from hardcore home cinema buffs down to budget-conscious beginners. The AVR-1611 is aimed more at the latter, sitting one step down the range ladder from the AVR-1911 but one above the entry-level AVR-1311. The main difference between this and the AVR-1911 is that the 1611 is a five-channel amplifier whereas the 1911 is seven channels and it’s slightly less powerful, offering 110W per channel compared with the 1911’s 125W. But inevitable cutbacks aside, the AVR-1611 looks like a great way of getting the surround sound basics without making too large a dent in your bank balance.

Externally, the AVR-1611 uses the same attractive design as the AVR-1911, with a subtly curved black fascia and chunky volume/input selection dials either side of a large LED display panel. This display dominates the front panel, and its size means you’re presented with lots of information about the incoming signal and the unit’s settings. Elsewhere the fascia is peppered with buttons, controlling the various surround modes and menus, but because they’re hidden amid the darkness of the unit’s black finish it doesn’t look cluttered. The AVR-1611 also has composite video and analogue stereo inputs on the front panel, as well as an input for the setup mic and a headphone jack.


Sadly, something else that doesn’t feel over-cluttered is the rear panel, which sports a fairly simple socket layout – a far cry from the busy back panels of Denon’s high-end receivers. But given its positioning that’s only to be expected, and there should be enough connections here to satisfy the needs of simple systems. Naturally our attention is immediately drawn to the HDMI inputs of which there are four, and thankfully all of them are v1.4. That means the AVR-1611 is ready to pass 3D signals from a Blu-ray player to a 3D-capable TV. They also support the Audio Return Channel feature, which means you can play back TV sound on the Denon using a single HDMI cable.

Making up the rest of the AV connections are three sets of analogue stereo inputs, optical and coaxial digital audio inputs, component, composite (x 2) and S-video inputs plus a composite video monitor output. You also get pre-outs for a subwoofer and powered surround back/front height channels, plus you can also connect an optional Denon iPod dock to the S-video, analogue stereo and dock control ports. All of the speaker terminals are binding posts, bucking the recent budget trend of using springclips for the centre and surrounds.

Step up to the AVR-1911 and you get two additional analogue stereo inputs and a USB port for playing back WMA, MP3 and AAC files from storage devices, or for direct connection of an iPod.

The AVR-1611 boasts an alluring feature list. It decodes both Dolby TrueHD and DTS HD Master Audio signals, as well as handling multichannel PCM over HDMI. Additionally the unit comes equipped with Dolby Pro Logic IIz, hence the inclusion of pre-outs for front height channels. The processing sends non-directional sounds to these channels to create the illusion of height, potentially enhancing your enjoyment of movies and video games. But if you’ve no need for that, Dolby Pro Logic IIx or the vanilla Dolby Pro Logic II are on hand to expand stereo sources to 5.1 in their own inimitable ways. The full suite of DTS formats are also supported, including DTS-ES Discrete/Matrix, DTS Neo:6 and DTS 96/24.


As per usual you get a wide range of DSP modes (seven in total). Rock Arena and Jazz Club are perhaps the least effective, but Multichannel Stereo is great for filling the room with music without the often detrimental effects Dolby Pro Logic II and DTS Neo:6 can have on the quality. These are joined by Matrix (which adds a spacious feel to stereo effects), Virtual (lends a pseudo surround effect when using only the fronts or headphones), Video Game and Mono Movie. None of them can be applied to HD audio formats, and they can all be bypassed by selecting the Direct mode. 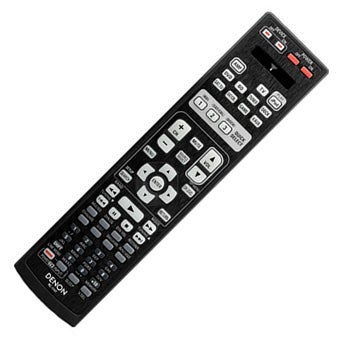 Joining these DSP modes are Restorer, which boosts the quality of compressed audio formats, and a range of Audyssey processing modes. Like most of the latest AV receivers, there’s a built-in auto calibration mode – in this case Audyssey Auto Setup, which uses a supplied microphone and test tones to measure the acoustic properties of your room and set the parameters accordingly. It’s quick to complete and mercifully the test tones won’t smash your ear drums to pieces. Once complete, Audyssey’s MultEQ, Dynamic EQ and Dynamic Volume kick in, continually monitoring the audio content and maintaining the optimum settings. It’s great for beginners, but any older hands who want more control over the sound will also find a detailed range of manual settings on board.


These are accessed from an onscreen setup menu, called up at the touch of a button. While we applaud Denon for this, they could have made a little more effort with the design. There’s a dour grey background with sub-VCR fonts and a clunky structure. Functional yes, but hardly befitting of a product with such cutting-edge credentials elsewhere. It covers everything from speaker setup to input assignment, plus the Information menu provides a handy precis of the current settings.


The remote doesn’t pose any serious problems, as the controls you’ll use most often are intuitively arranged. The menu buttons and volume keys, for instance, are clustered together in the centre, while the input selection buttons are arranged logically along the top. The glow-in-the-dark buttons are a helpful touch, but Denon has packed in too many keys at the bottom, and as a result it takes a little while to work out how to access certain sound modes.

Things are much less uncertain when it comes to performance – the AVR-1611 plays a blinder. It does a wonderful job with ”Hellboy II’s” centrepiece scene in which our titular hero squares up to a 50-foot tree, getting stuck into the stunning sound design with plenty of gusto. Front and surround effects are feisty and dynamic, while the clean surround channel reproduction and smooth steering help achieve an enveloping, expansive soundstage.

What’s more, the Denon dredges up lots of small sonic details, such as tinkling glass as the Elemental scrunches up cars, or the delicate rustling as plants snake their way up the sides of the buildings. You’re also treated to a hearty helping of taut, expertly controlled bottom end, while clear dialogue reproduction from the centre channel means you’re never straining to hear what Hellboy or Herr Krauss have to say amid the chaos.


The only bad news to report is a slight edge to the sound when the volume is turned up high. The powerful screech of the Elemental sounds ever so slightly harsh, and a few other transients sound a little ripe. The AVR-1911 and other models in this price range like the Onkyo TX-SR608 handle these same effects with a touch more smoothness and body. But that’s the only flaw in an otherwise superb performance.


There’s some stiff competition in the budget-to-midrange receiver market, but with four 3D-ready HDMI inputs, some eye-catching features and impressive performance the Denon AVR-1611 makes a great case for your cash. The onscreen menus need jazzing up and some minor sonic shortcomings betray its budget price tag, but otherwise this is yet another solid AV receiver from Denon that deserves a place on your shortlist.