Denon has offered an impressive range of high-end headphones for years now. However, at the launch of the Denon AH-D7100 and its other new headphones and earphones, it wasn’t coy in telling us that they hadn’t quite made the impact that was hoped-for. The new crowd are here to change all that.

Design
Heading up the new contenders, the 1200 Euro Denon AH-D7100 is a mix of the familiar and the new. Design-wise, they’re a little similar to the Beats by Dr. Dre Studio, the top-end range from the famous (and infamous) Beats range. These are closed-back headphones that have a core two-part make up.

The outer part is the plastic composite that makes up the headband and outer cup. Inside is the high-gloss finish mahogany earcup shell, topped with some seriously chunky leather pads. Although the Dr. Dre comparison was one Denon’s headphone guru was not afraid to make, these come across as a whole lot classier than the Beats bunch. 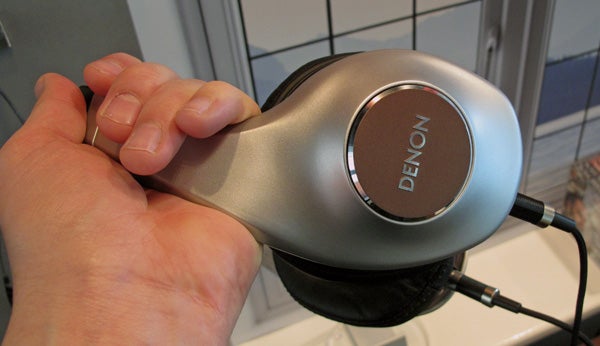 Frosted silver and brown in colour and with plenty of moulded, organic lines, they make Denon’s previous flagship AH-D7000 headphones look a bit dumpy and uninteresting. The particular polymer used in the outer part seemed to be slightly cool to the touch, helping them to avoid the cheapy feel plastics can often bring.

From our session with the AH-D7100, we found them commendably comfortable too. Padding is soft and generously laid-on, although a closed-back headphone like this is not going to disappear on your head in the way some large ‘n’ light open back sets do. The pay off is in noise isolation, which dealt with the noisy environment of Denon’s demo area very successfully.

However, these headphones are too large and far too expensive to make using them outdoors a sensible option – then again, not everyone has a quiet house to while away hours listening to music in, which you need to an open pair. Another tick on the must-have features list at this price, the AH-D7100 cable is removable, using chunky jack plugs that fit into each earcup. 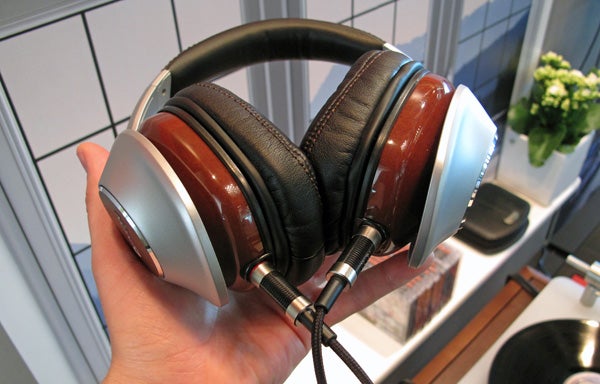 The cable used in the demo was braided, and seemingly of exceedingly good quality. If you really want to use these on the bus, Denon says a second cable using a 3.5mm jack (the standard is 6.35mm) and featuring a handsfree/remote housing will also come included.

Sound Quality
But how do they sound? Wonderful, of course, but then you’d expect that for a grand and change. 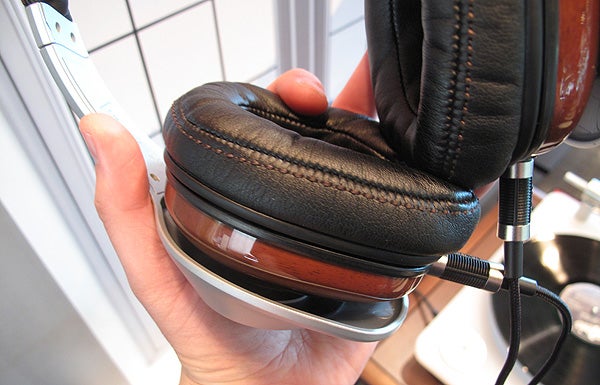 The Denon AH-D7100 use 50mm Free Edge Nano Fiber drivers, which are meant to bring the sound of full-size speakers to headphones. And while that in itself is a vague aim, their sound is exceptionally rich and powerful. We were initially surprised by the weight of the bass, expecting a more delicate and thoughtful approach from such a high-end headphone. However, it’s not destructive, with bass control good enough to keep the low-end within its pen.

Smooth and rich, the Denon AH-D7100 offer markedly different sound to one of their stand-out pairs of rivals, the Sennheiser HD 800. With closed backs, they’re predictably less wide-sounding and have less of a focus on top-end detail, but there’s a sumptuous luxuriant quality here that makes them a viable alternative. And we should also note spaceousness and soundstage size are excellent for a closed set.

We’ve not yet spent enough time with these headphones to judge whether the AH-D7100 are high-end winners or not, but early impressions suggest Denon has done what it set out to – to produce a series more desirable and attractive than the previous lot, without sacrificing sound quality a jot. We’ll be back with more in our full review.