I’ve seen many companies try to take on the Apple iMac before, but they’ve largely been PC copies of the same design, rather than something fresh. It’s good, then, to see Dell do something different for its XPS 27 All-in-One, crafting a PC that’s designed to play to Windows’ strengths while adding some unique hardware touches.

With its 27-inch display, the XPS 27 is rather an imposing all-in-one measuring 435 x 625 x 80mm. Like the iMac it has a large chin at the bottom, although, in this case, it isn’t just dead space but houses six speakers in the glossy black frame. The result is a computer that looks refreshingly different to the competition and fantastic in its own right. Certainly, this is an all-in-one that’s been built to garner attention, and I’d proudly have it sat on my desk.

A common complaint with all-in-ones is that they often have inflexible stands, but this isn’t the case with the XPS 27. Thanks to the adjustable hinge mechanism, you can move the screen anywhere between face-on to flat on the desk. Getting the screen lined up comfortably is easy, and the manoeuvrability makes the touchscreen much easier to use, as you don’t have to lean awkwardly across a desk to prod at the screen. 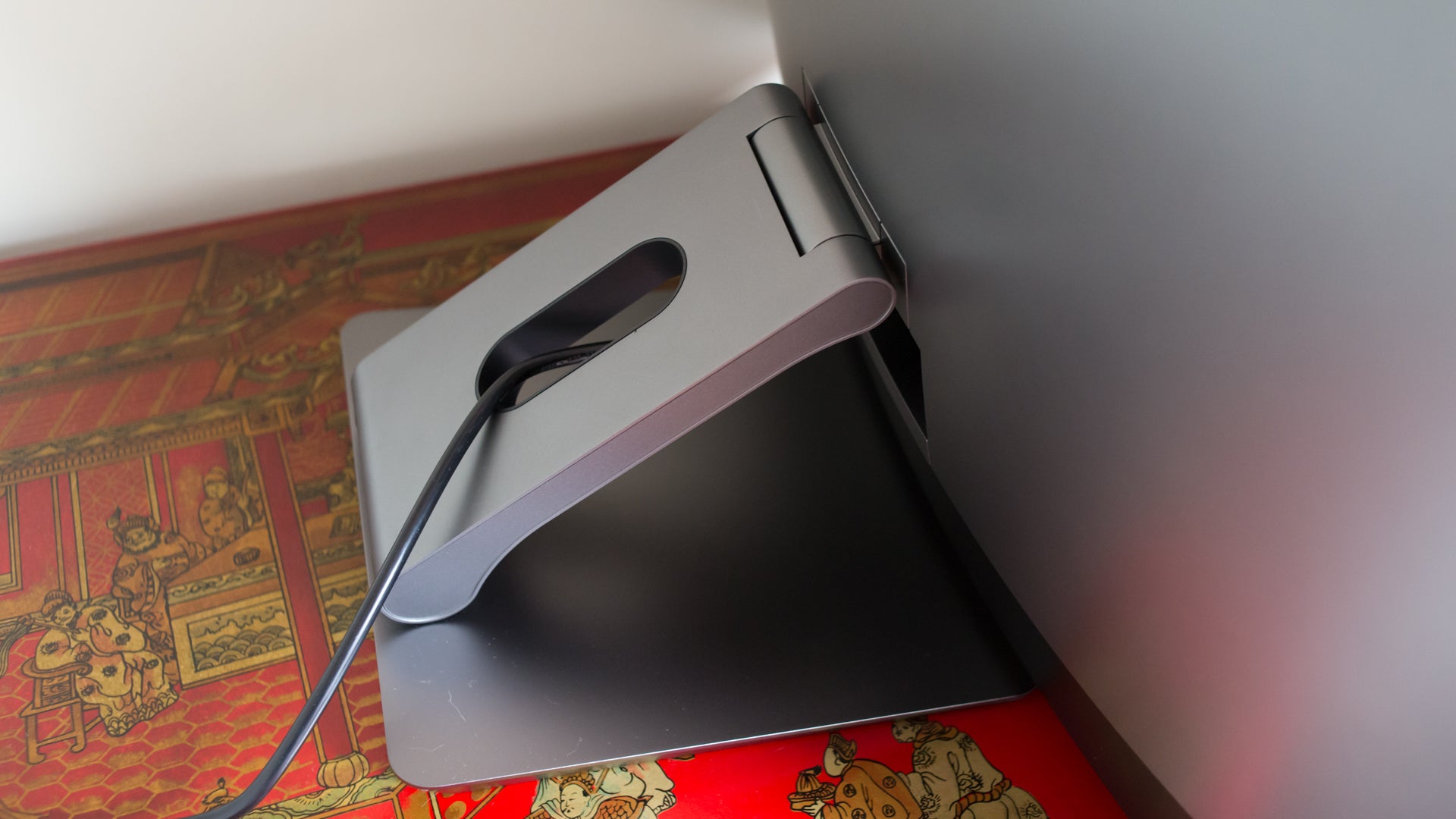 The minor downside is that the full-metal stand, to cope with this movement, adds to the weight, with the touchscreen model of the XPS 27 weighing in at a hefty 17.3kg. Still, it’s unlikely that you’ll be shifting the position of the machine much once it’s in place.

One of the main bugbears of the TrustedReviews team is that the ports of all-in-ones are usually shoved at the rear, where they’re hard to get to. Having to spin a computer around to plug in a USB drive is, frankly, annoying. Hats off to Dell, then, for building the XPS 27 with thick enough sides to include a USB 3.0 port, a 3.5mm audio jack and an SD card reader. 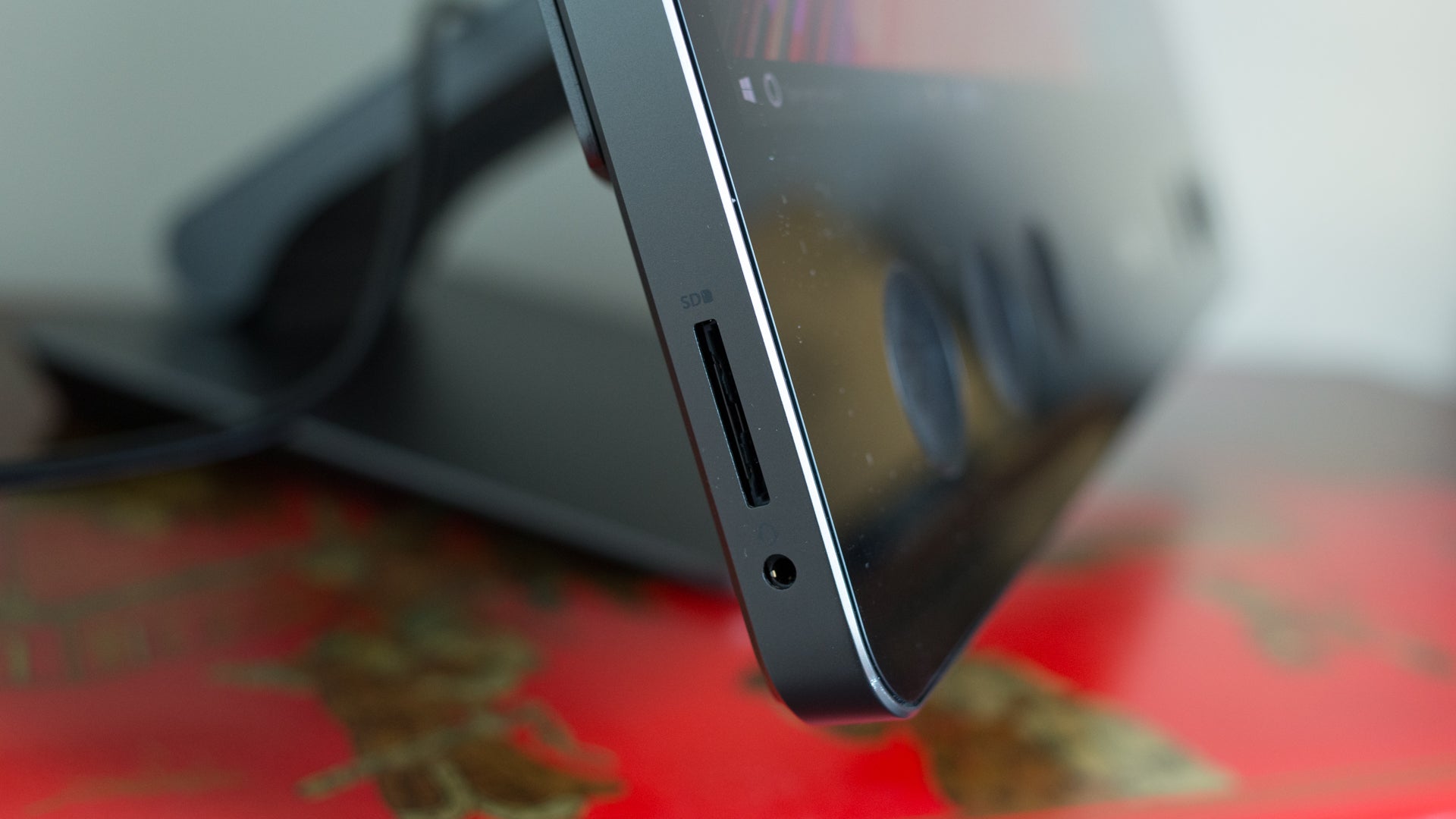 At the rear, you’ll find the PC’s other ports. They’re located in a recess cut into the back of the case and hidden behind the stand’s hinge. Given that the cut-out is black, finding the ports is hard, and plugging anything in requires a great deal of manual dexterity and patience. 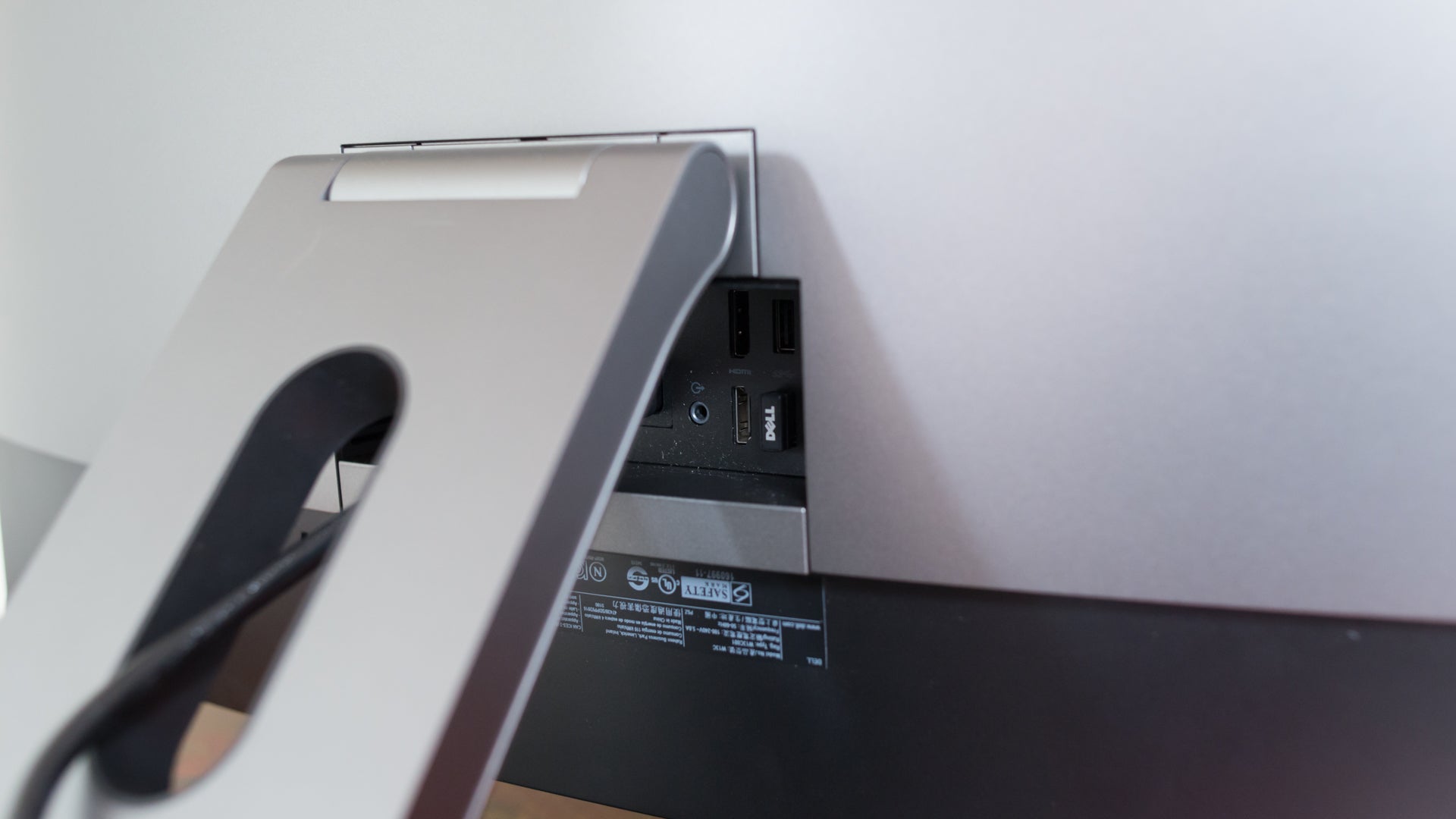 There’s a good choice of ports, including four USB 3.0 and two Thunderbolt 3 ports, plus HDMI and DisplayPort 1.2 graphics outputs, Gigabit Ethernet (802.11ac Wi-Fi is built in), and a 3.5mm audio output. The kettle-plug power connector is also here. It’s a shame that there are no video inputs, which means you can’t use the XPS 27’s screen for external devices such as games consoles.

Once again, it’s frustrating that one of the USB ports has been taken up with a dongle for the keyboard and mouse. Quite why PC manufacturers can’t just build the receiver into the PC itself is beyond me.

Since this is a premium product, Dell ships the XPS 27 with its Premiere wireless keyboard and mouse. Both use Bluetooth to connect to the XPS 27. Neatly, both can be connected up to three different devices, switching between them using their selector switches. 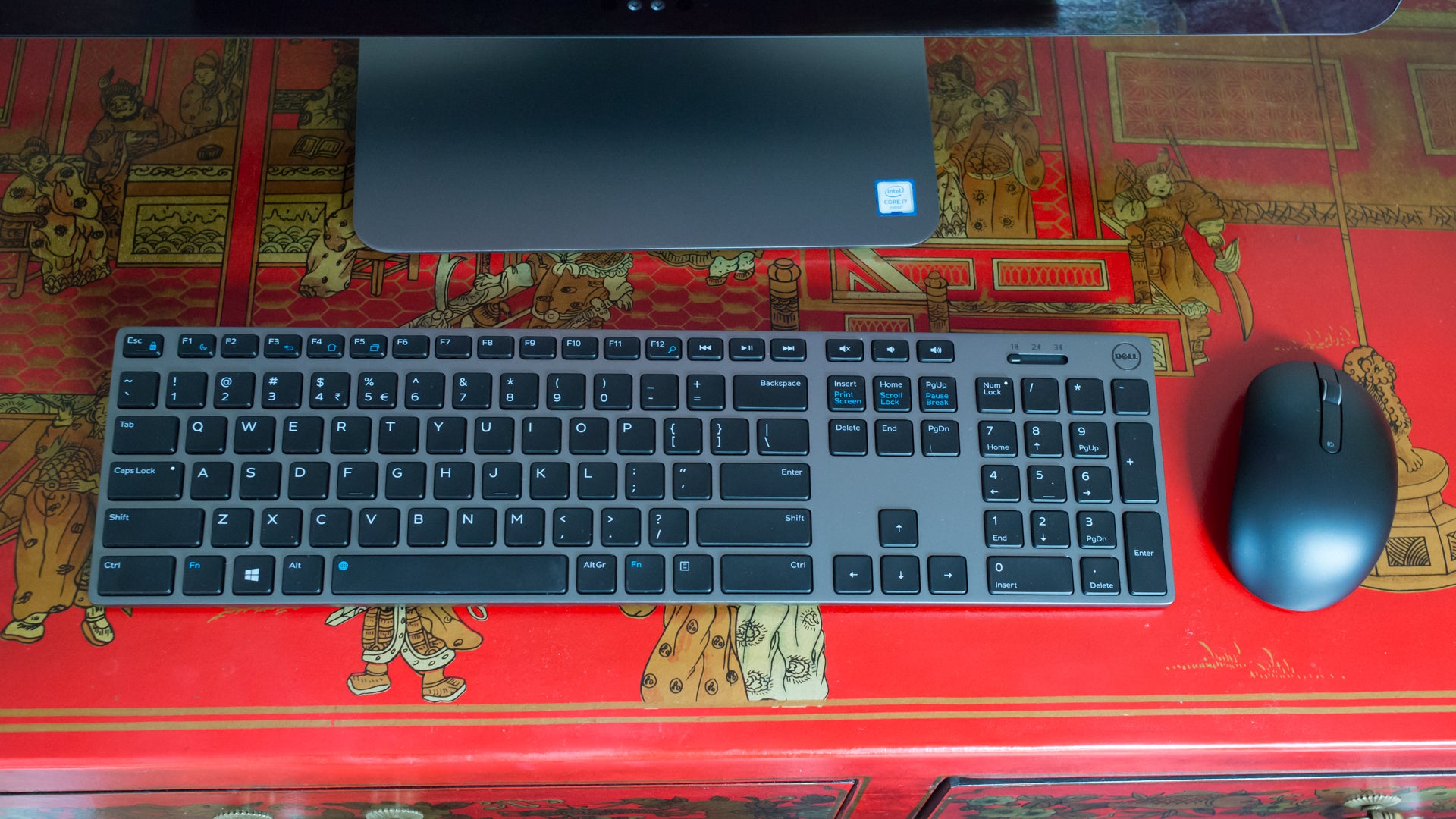 The keyboard impressed me the most. It’s full-sized with a numeric keypad. I found the keys responsive, offering a decent amount of travel and plenty of feedback. If anything, the action is a little on the hard side, requiring a relatively firm press, but that’s a minor criticism. On balance, I marginally prefer the Microsoft Surface Keyboard, but it’s a close-run thing. 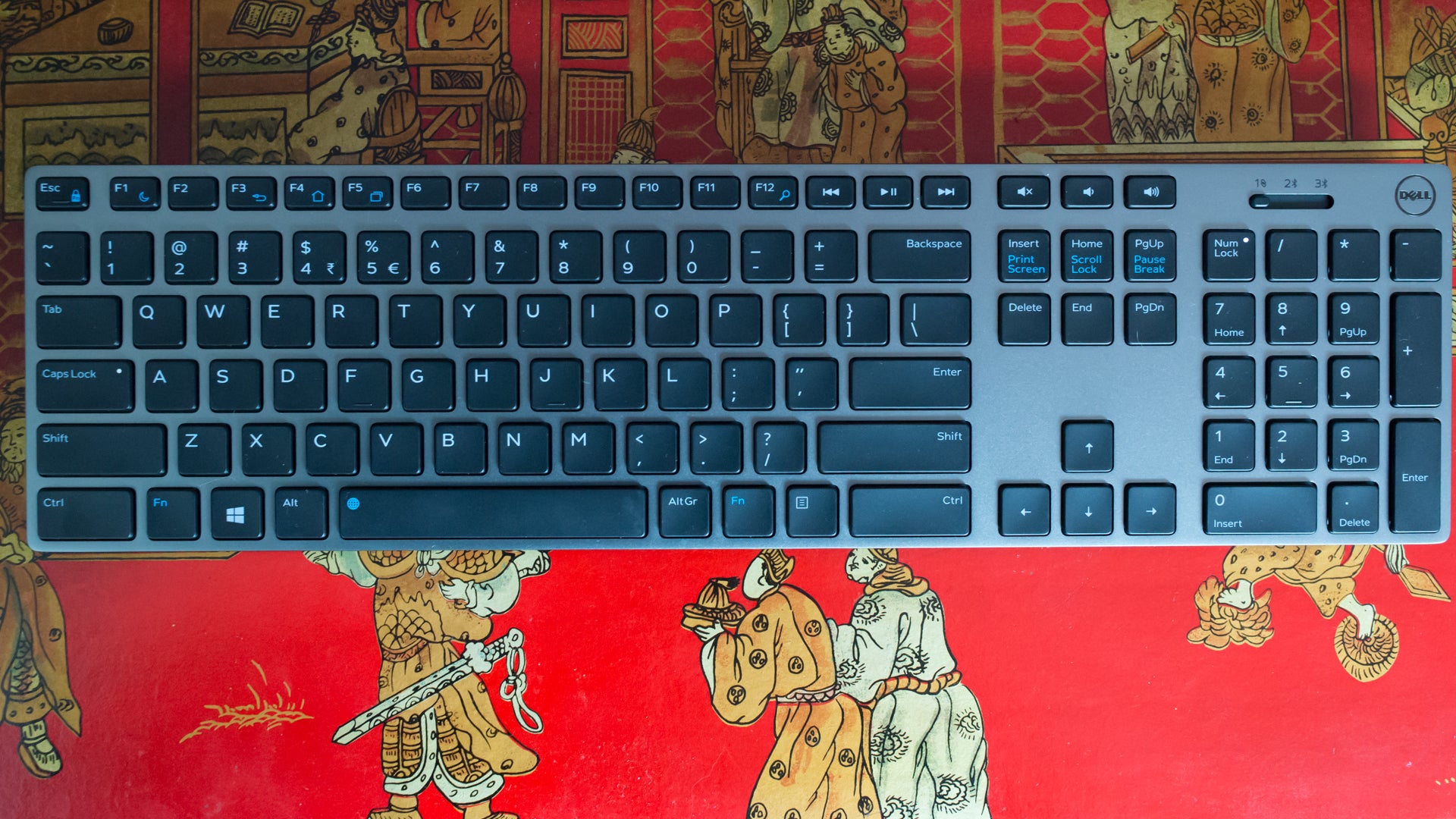 As seems standard, the wireless mouse is a little more basic. Its symmetrical design means that both left- and right-handed people can use the mouse with comfort. A standard range of controls (left and right buttons, a scroll wheel, and back and forwards buttons) lets you do pretty much everything you need. I’d have liked to have seen the peripherals come with rechargeable batteries, but they both use AAA cells instead. 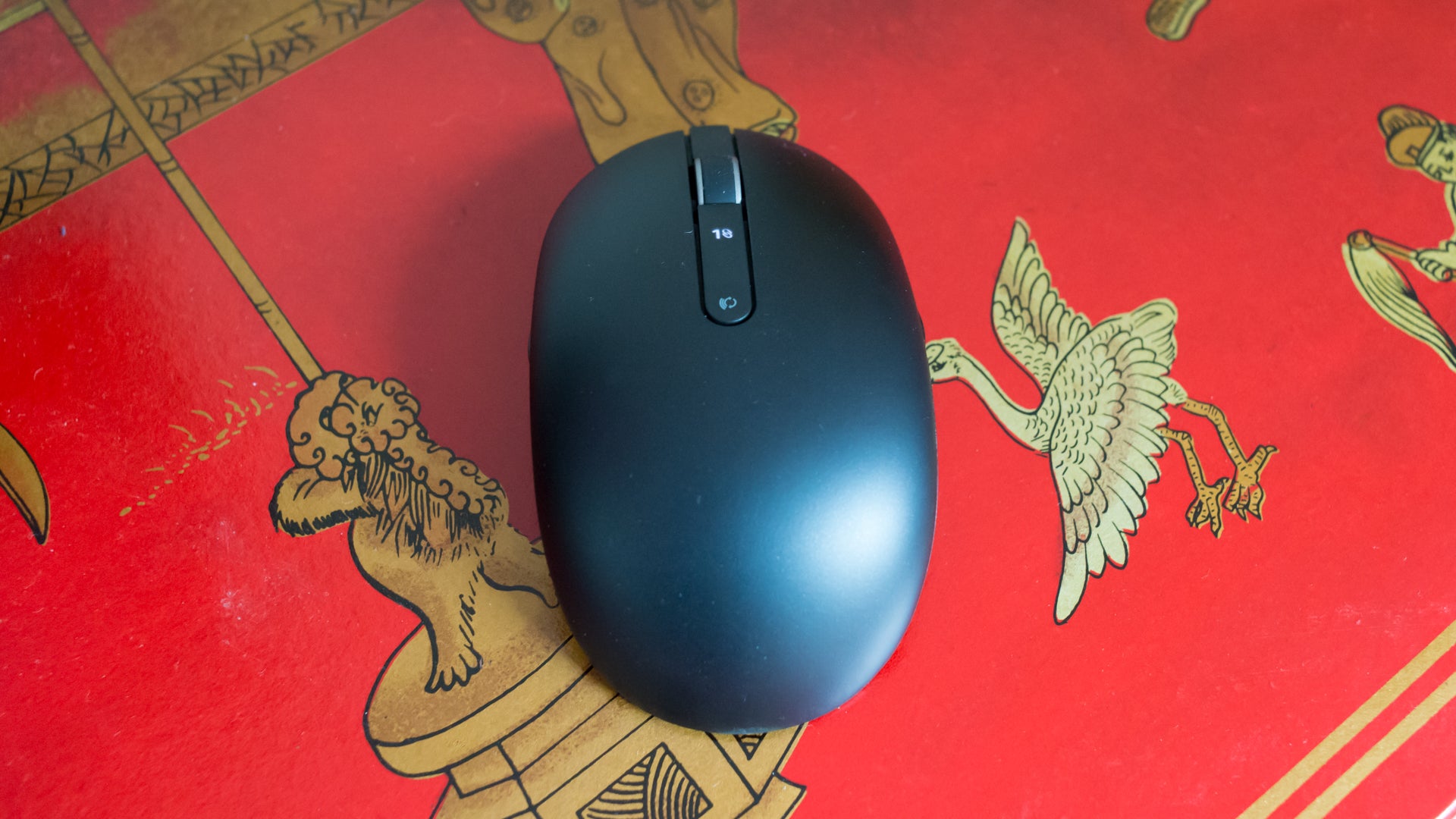 Given that you’re stuck with the screen with which an all-in-one ships, the quality is of immense importance. For the XPS 27, Dell has used a 4K (3840 x 2160) IPS panel. Dell quotes 100% Adobe RGB colour gamut coverage, promising that this display is a cut above the competition. Certainly, from a subjective point of view, it’s a great-looking screen. It’s bright, viewing angles are excellent, and colours pop and fizzle, giving you vibrancy while maintaining realism. Flicking through my test photos I was pleased to see all of the detail; this is one display I’d be happy to look at all day. 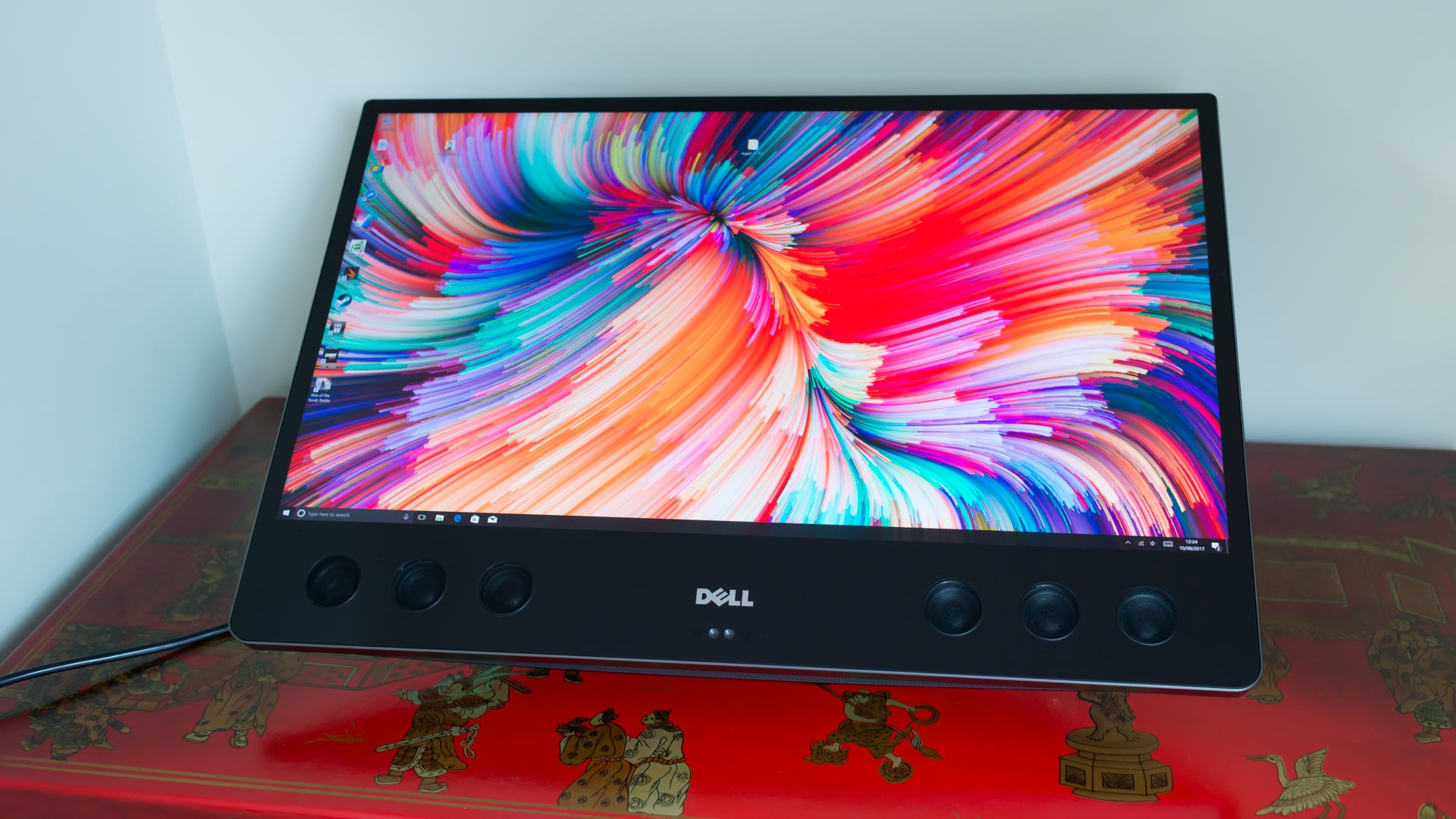 Objectively, I first measured the screen at maximum brightness (a respectable 386 nits) as able to produce 99.3% of the sRGB, 96.2% of the Adobe RGB and 90.7% of the DCI-P3 colour gamuts. With a Delta E score of 0.74 (where a score that’s closer to zero means a perfectly accurate screen), it shows that the screen can display colours with a good degree of accuracy. Dropping brightness down to 120 nits and calibrating the display, I managed to improve coverage to 99.4% sRGB, 96.3% Adobe and 90.6% DCI-P3, dropping the Delta E to 0.66.

Dell also has its own colour management software, Dell PremierColor, which lets you choose the colour space you want to display (the default is Adobe RGB), and adjust the colour temperature, contrast and brightness. This utility has a built-in calibration wizard that works with the X-Rite i1DisplayPro calibrator. Calibration takes only a few minutes, reconfiguring the screen to use the Vibrant (Full) colour gamut. Retesting after this, I found improved colour coverage of 100% sRGB, 99.8% Adobe RGB and 92.9% DCI-P3. Delta E increased slightly to 0.7.

Contrast comes in at a decent 1148:1, putting the XPS in a similar position to other high-end all-in-ones that use IPS panels. Image quality certainly rivals that of the 21.5-inch iMac, although Apple’s computer can go considerably brighter, up to 532 nits.

All-in-ones are generally known for having terrible audio performance, so it’s good to see Dell fight back. At the front, there are two tweeters and four full-range drivers. Reinforcing the audio are two down-firing full-range speakers and two passive radiators to provide bass. 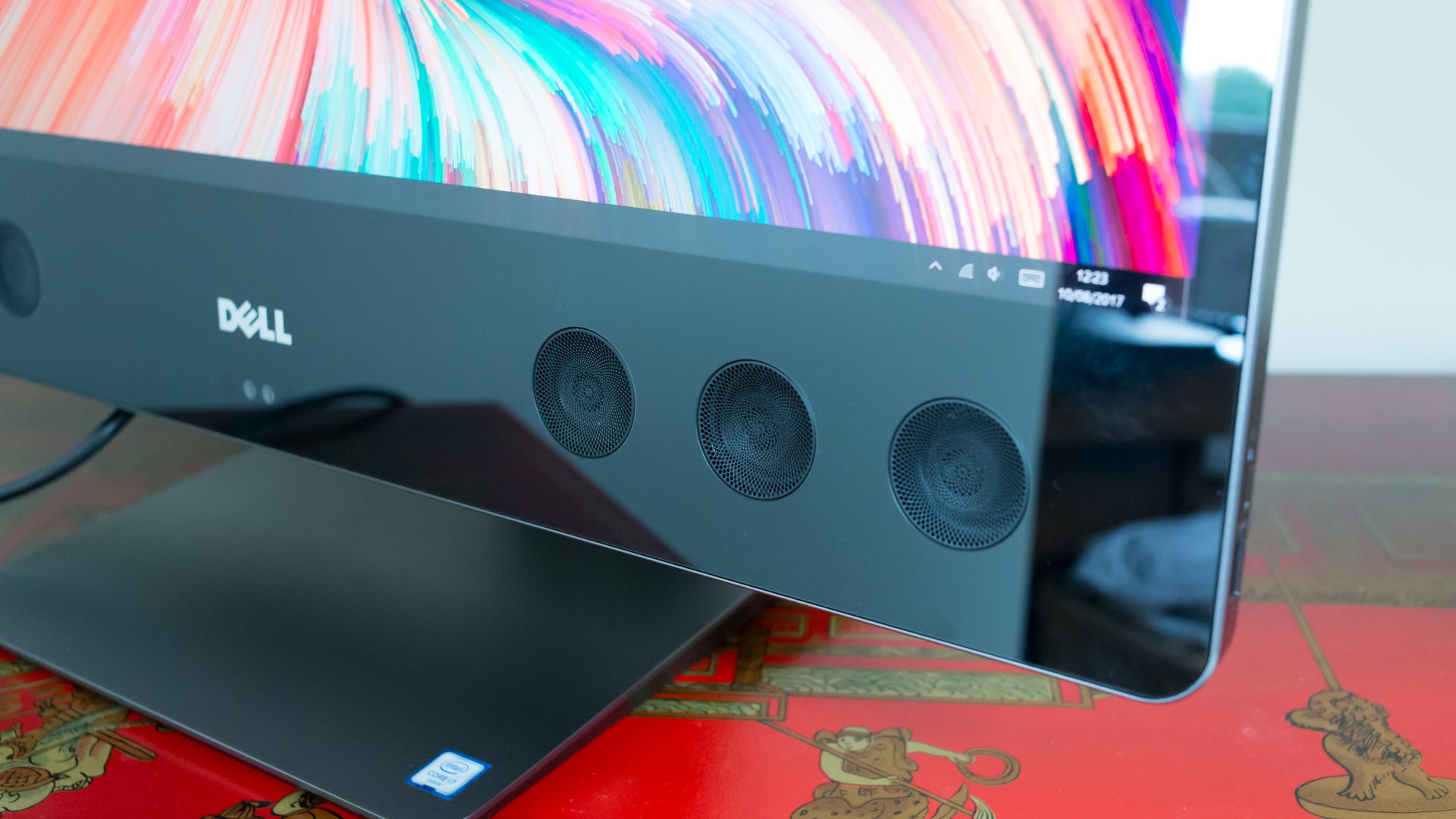 Audio is excellent. Movies and TV shows sound great, with clear dialogue and enough presence to make the most energetic effects and soundtracks spring to life. Switch to music and the thumping bass, a clear mid-range and defined high-end works well. With the XPS 27, you definitely aren’t going to need external speakers.

The system comes with a built-in 720p HD webcam. It’s awkwardly positioned at the bottom of the screen, shooting upwards; it makes far more sense to put cameras at the top of the screen. Image quality is a little ropey, displaying a fair amount of noise. For occasional video calls, it will do the job. More importantly, the camera supports Windows Hello, so you can use facial recognition to unlock Windows 10. I’m pleased to say that the microphone is great, clearly picking up my voice. 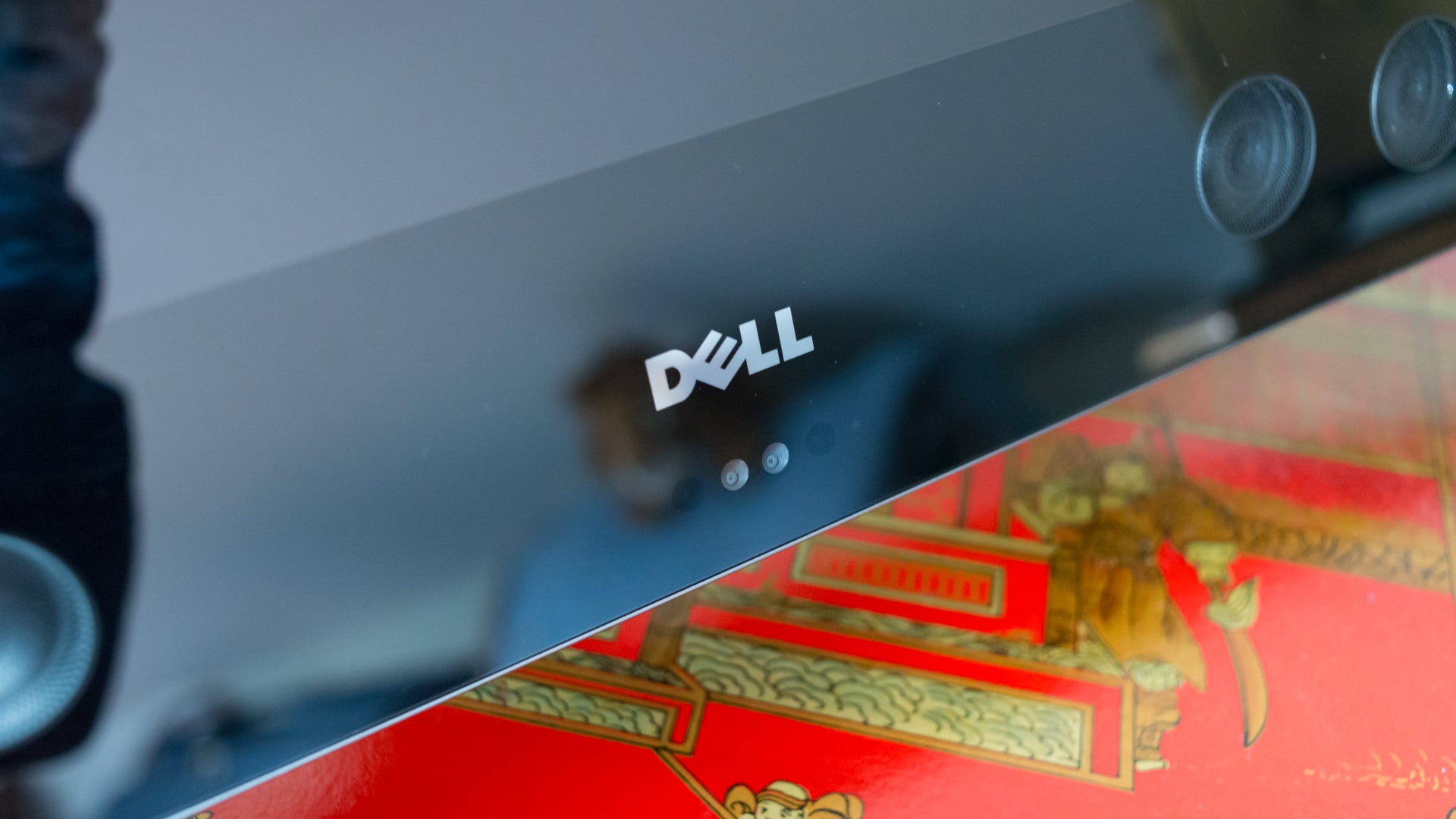 My review model shipped with an Intel Core i7-6700 CPU (6th-gen Skylake) rather than the newer Kaby Lake, 7th-gen i7-7700. This isn’t too much of an issue, since our benchmarks have shown that Intel’s latest processors aren’t a huge amount faster.

In short, then, the XPS 27 is  exceptionally fast. Thanks to Hyper-Threading, the i7-6700 has four real cores and four virtual, making for a total of eight threads. Combined with the 16GB of RAM, the XPS scored 14,754 in Geekbench 4’s multicore test and 4163 in PCMark 8 Home. Both are just about what I’d expect from this processor and show that it’s certainly powerful enough for any job.

This XPS model has a 512GB PCI Express x4 SSD installed. Other models are available with a 1TB hard disk, but I find mechanical storage hard to recommend now, since it’s too slow and runs the risk of making a computer feel sluggish. Dell has used a quick SSD, and I measured read speeds of 1797MB/sec and write speeds of 1061MB/sec. Quicker SSDs exist, but at these speeds the XPS 27 was both exceptionally fast to boot and very responsive.

Dell shipped me an XPS 27 with a Radeon R9 M70X. This chip is fairly middle-of-the road and certainly won’t cope with 4K gaming. Playing at 1080p is possible, though. Testing with Middle-earth: Shadow of Mordor, I saw an average frame rate of 76.31fps with Ultra detail settings. Switching to the more demanding Rise of the Tomb Raider, frame rates dropped to 30.17fps using High detail settings. Dialling down detail settings further would make for smoother gaming. Alternative options include a base-level PC with Intel HD graphics or a higher-end model with Radeon R9 M485X.

When idle, the XPS 27 All-in-One is exceptionally quiet, and you’d struggle to hear its cooling fans. I’m sure this is in part due to the decent amount of space in the case, with the slightly bulbous chassis providing room for decent cooling. Fan speed picks up for more involving tasks, but the computer generally doesn’t make much noise. 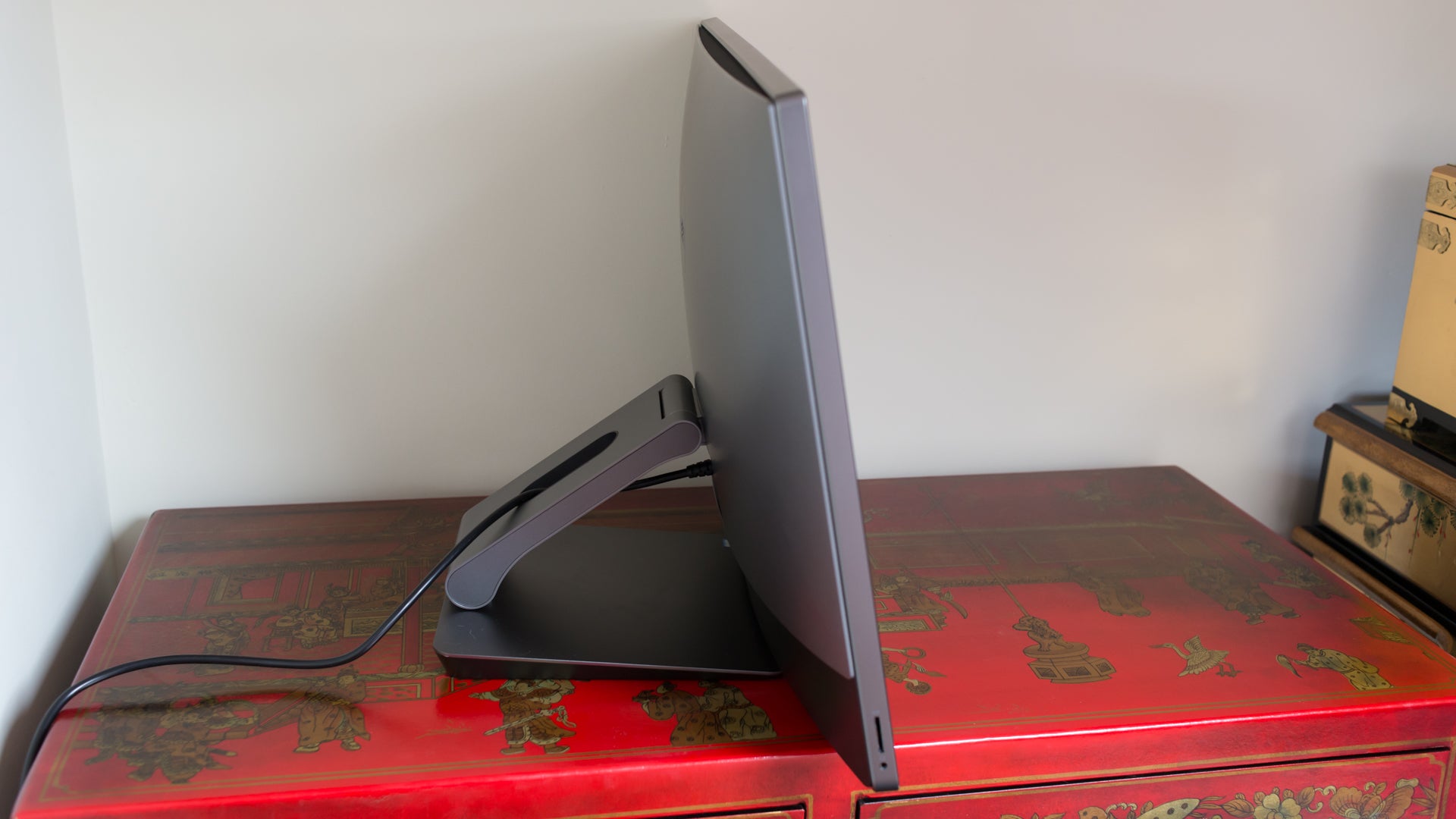 Should I buy the Dell XPS 27 All-in-One?

Dell has done a brilliant job with the XPS 27 All-in-One. It’s exceptionally well built, includes high-quality peripherals, fantastic audio and a magnificent 4K display. Certainly, if you’re looking for a top-quality Windows 10 all-in-one, there’s nothing that comes close to the XPS 27 for all-round quality.

There’s no getting away from the fact that it’s expensive, however, with our review model costing a whopping £2699. You can save money if you’re willing to compromise a little: the model with a Core i5-6400, no touchscreen, Intel graphics and a 1TB HDD costs £1799.

By comparison, a similar-spec 27-inch 5K iMac would set you back around £2609, but with the advantage of a more powerful Radeon Pro 580 graphics chip. As an all-round package, the iMac remains more attractive. But as far as Windows all-in-ones go, the Dell XPS 27 is at the top of the tree.

It may be expensive, but the combination of high-quality audio, great looks and top performance make this a truly desirable all-in-one.