The XPS 13 is the best all-round, small-form-factor Windows 10 laptop you can buy, but it isn't quite perfect.

Update: The Dell XPS 13 2019 model has since been released, which packs a faster Whiskey Lake processor and has seen the webcam moved back to the top of the display. We recommend going for the revamped model over this 2018 edition, although you may be able to find the latter at a bargain price.

The Dell XPS 13 is the flagship 13-inch laptop in Dell’s Ultrabook lineup, and for the past few years it’s been king of the small-form-factor laptops.

This won’t be changing any time soon, since this latest upgraded XPS 13 has once again set the benchmark for all other 13-inch Windows laptops.

Featuring improved internal specifications plus a number of subtle but important design tweaks, the XPS 13 is currently the best 13-inch laptop you can buy.

But if you’re a creative working in physical media then beware: while the display is perfect for regular users and is super-attractive, its colour gamut coverage remains leagues behind that of the MacBook Pro.

At first glance the new Dell XPS 13 doesn’t look particularly different to its predecessor – the sleek design and InfinityEdge display are still present and correct. But upon closer inspection you’ll spot a few subtle, but positive, changes.

For starters, Dell has managed to reduce the already minuscule 5.6mm bezel around last year’s display to a meagre 4mm on the new XPS 13. It’s also moved the webcam to sit centrally below the screen.

The placement doesn’t stop the webcam generally giving people a lovely shot of your nasal passages during video calls, but it does at least make you centrally framed, which is a minor improvement. Personally, I’d have also liked it if Dell had bump up the camera’s max resolution to 1080p, like the Surface Book’s, but using the XPS 13 as my main work laptop I didn’t have any huge issues with its max 720p resolution.

Fortunately a new model releasing in 2019 will have a new webcam positioned above the display without impacting the ultra-thin InfinityDisplay bezel as this will be the smallest webcam Dell has made yet. I can’t comment on the new webcam’s quality yet though, having not yet being able to test it.

Up close you’ll see Dell has surrounded the keyboard and trackpad with a new woven glass-fibre finish. I wasn’t the biggest fan of the new white and gold version I tested, but some other reviewers swooned over it – each to their own, I guess. Either way, the material feels well made and proved to be suitably scratch-resistant. 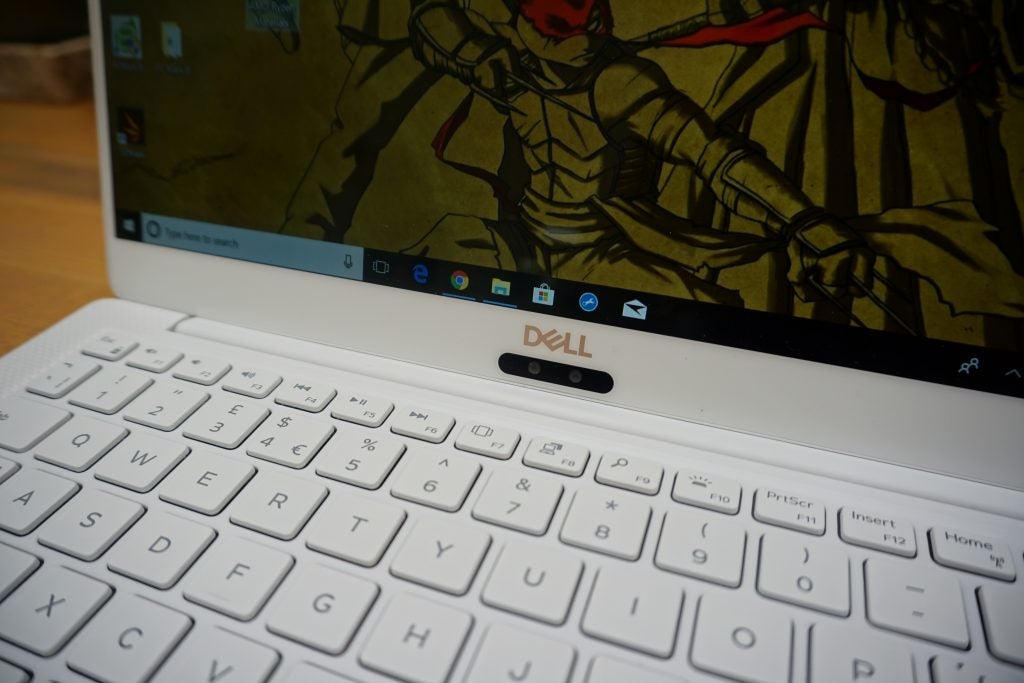 Build quality also remains excellent. It felt suitably rugged and easily survived being lugged around London in my satchel for a week without picking up a single blemish. The laptop’s 1.21kg weight also means it’s lightweight to use on the go.

My only minor quibble with the design is that Dell has dropped the previous model’s full-sized USB 3.1 ports, replacing them with USB-C inputs. Specifically, you get two Thunderbolt inputs, a basic USB-C 3.1, a 3.5mm jack socket, and a microSD port. The XPS 13 does come with a USB-C-to-USB 3.0 dongle, but the lack of a full-sized socket is a little annoying if you regularly swap out peripherals. Photographers will definitely miss having a full-fat SD card slot.

Dell has also worked to make some subtle improvements to the keyboard and trackpad. Specifically, the layout is a little more spaced out – although unless you place it side by side with last year’s model, you’re unlikely to notice a significant difference. However, the slightly more spacious keyboard is definitely more comfortable to type on, aided by the new, softer palm wrest.

Travel of the backlit chiclet keys isn’t the deepest you’ll find, but the keys offer decent feedback and have a nice tactile feel, which makes for an above-average typing experience that’s only beaten by the MacBook Pro. The MacBook features a custom Butterfly 2 keyboard which, although noisier, offers one of the best typing experiences you’ll find on any laptop.

The glass-coated touchpad isn’t as big as that of the Macbook Pro, but it’s about as large as Dell could make it considering the XPS 13’s dinky dimensions.

It’s one of the best you’ll find on a Windows laptop and is a close second to the MacBook Pro’s, which remains the best on the market. It’s wonderfully responsive and uniformly picks up multi-touch commands without issue. 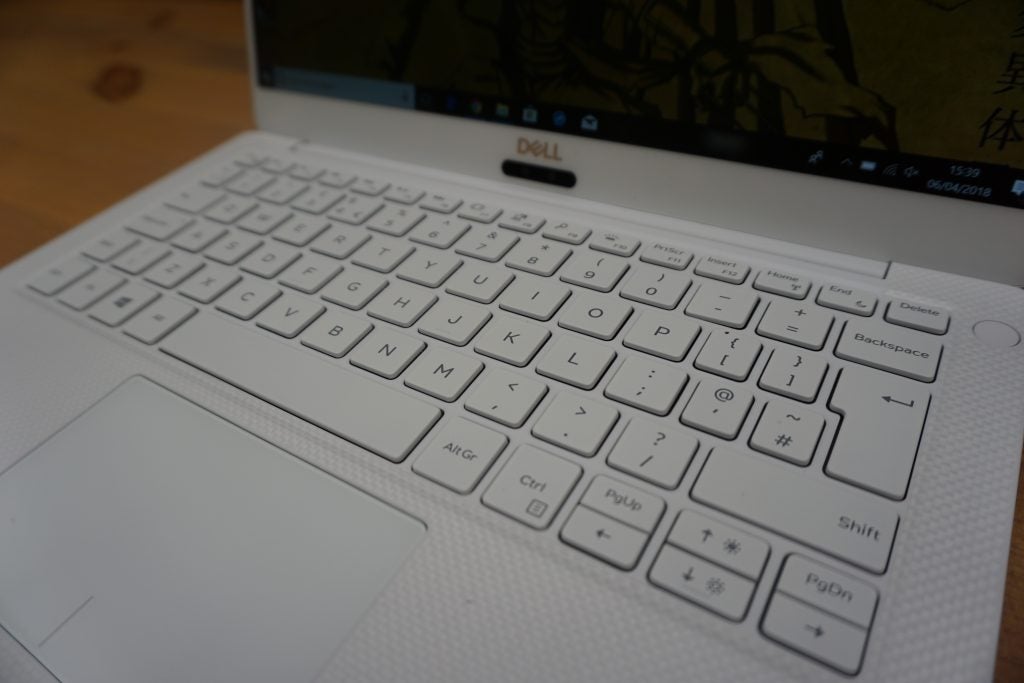 The new XPS screen has been completely revamped, with Dell now offering a 4K IGZO touch option. Sadly, I only got the chance to review the basic 13.3-inch FHD (1920 x 1080) InfinityEdge non-touch version, which from my testing seems to be pretty similar to its predecessor.

To the naked eye, the screen is a delight. The panel is pleasingly free of backlight bleed, is super-bright, and in general, colours look nicely vibrant without being overcooked.

The colorimeter screen readings matched my initial impressions. The 0.2691cd/m2 black level and 409.38cd/m2 white level add up to give the screen an excellent 1521:1 contrast ratio. The 6997K colour temperature is a smidgen cool compared to the 6500K ideal, but not to the point that many people will notice. All in all, you won’t have any issue using the screen for office work or streaming video.

The InfinityEdge’s only downfall remains its creative colour gamut coverage. The 90% sRGB coverage is great for normal users, but the 65% Adobe RGB and 68.8% DCI-P3 won’t be good enough for photographers, videographers or artists who physically print their work.

It’s also a step behind the 13-inch MacBook Pro’s, which covers 98.3% of the DCI-P3 gamut and 81.9% of Adobe RGB. Colour gamut coverage is important for creatives, as it helps inform how accurate the colours are on-screen. It gives a better representation of how the finished product will look when printed or shown on a cinema screen. 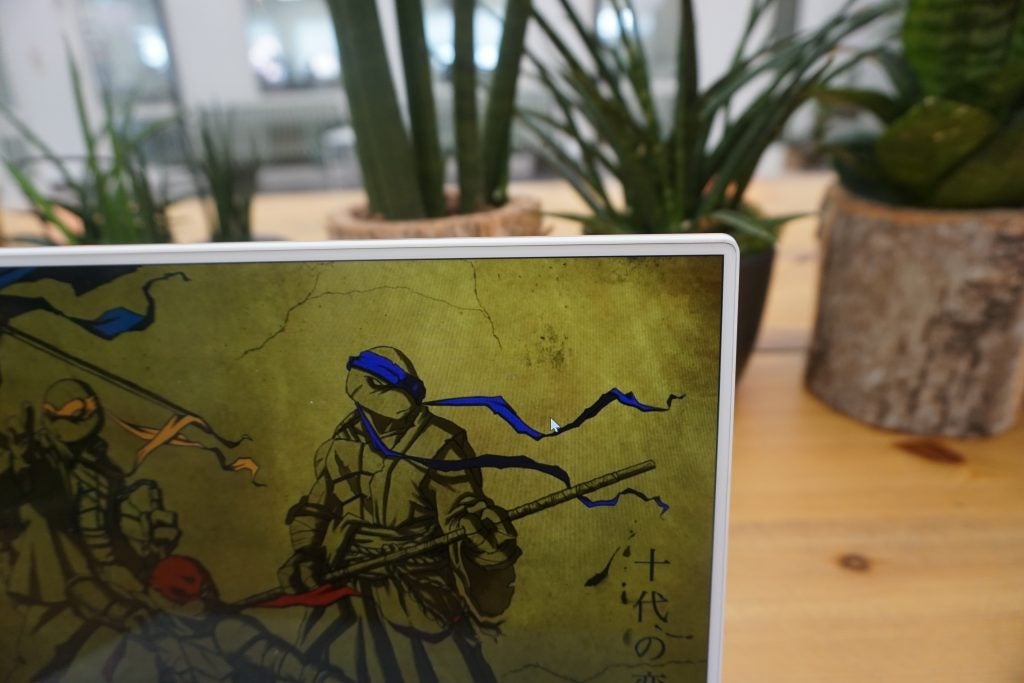 Dell has also boosted the XPS 13’s audio capabilities by doubling the number of speakers from two to four. The speakers aren’t a replacement for a proper sound system and, as with every laptop, you won’t want to use them to listen to music for prolonged periods. Nevertheless, they’re excellent for watching movies.

Sitting directly in front of the laptop, the speakers are powerful and offer a surprisingly chunky low end. Highs and mids are also reasonably well handled and avoid sibilance, even when watching movies at high volumes. Rumbling engines in movies sound meaty, and gunfire is nicely attacking.

When it comes to performance, the big change in the new XPS is the move to Intel’s 8th-gen mobile processors, which according to Dell will offer up to 44% better performance. When buying the XPS you can currently pick between a Core i5 or i7, various RAM options and a multitude of different storage configurations. You can see a full list of the various options in the table below.

Performance between each configuration will vary hugely. The model I tested featured a Core i7 CPU, 16GB of RAM and a 512GB SSD. This combination of parts is impressive, and my only real issue is Dell’s  decision once again to add an Intel Iris Graphics option. Whichever configuration you pick, you’ll be limited to Intel UHD Graphics 620.

This won’t be an issue for regular users, but it does mean the laptop struggles with demanding processes, such as large-scale 3D modelling in ZBrush or 4K video editing.

Considering the laptop’s focus size and the screen’s gamut coverage, this is far from a deal-breaker, especially considering the XPS 13’s impressive benchmark scores.

You can see how the XPS 13 compares to the equivalently specced i7 versions of the Surface Book 2, Surface Pro and MacBook Pro in the table below.

Editor’s note: We used a different set of benchmarks when the MacBook Pro was reviewed, which is why there’s not a comparison here. We’ll update this review when we retest the MacBook.

The generalist Geekbench and PCMark scores are excellent for a laptop without a dGPU. The only performance blip is the SSD write score, which is inexplicably lower than expected. This, again, will be an issue for video editors.

With real-world use the XPS 13 performs amazingly well. I’m yet to have any issue using the laptop as my primary work and play device.

The Dell also handled small digital painting work with ease, with a Wacom Intuos graphics tablet attached. 3D work in Blender put a bigger strain on the device, and it did begin to struggle when working on bigger projects – but that’s hardly surprising on a laptop with Intel HD graphics.

The same is true with gaming. If you buy the XPS 13 then don’t expect to be able to play anything other than old, or low-power, indie titles.

Heat and noise are excellent, no matter the task at hand. This is largely thanks to the XPS 13’s reworked cooling system. The laptop use GOR technology cooling tech, which places a layer of gel insulation across fans and heatpipes to improve cooling.

The system worked a treat during testing and meant the laptop never became uncomfortably hot – although when I really pushed it in Blender, minor fan noise did begin to creep in. 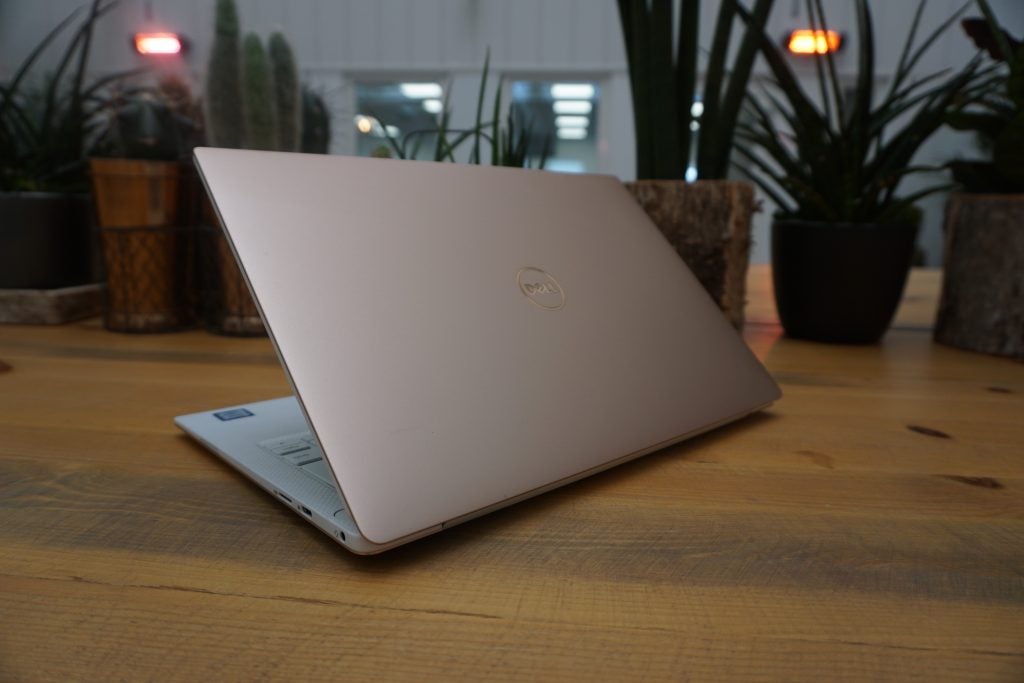 Dell claims the XPS 13 will offer up an astonishing 19hrs 46mins of use. This is the sort of battery life you’d expect from a tablet with a mobile processor, not an i5- or i7-powered Windows 10 PC.

The laptop managed an average of 12-13 hours through the three battery tests, which is above average for a laptop with the XPS’s specs.

With real-world use the XPS 13’s battery performance mirrored its benchmark score. Using it as my primary work and personal laptop, it usually lasted a full day with regular use. 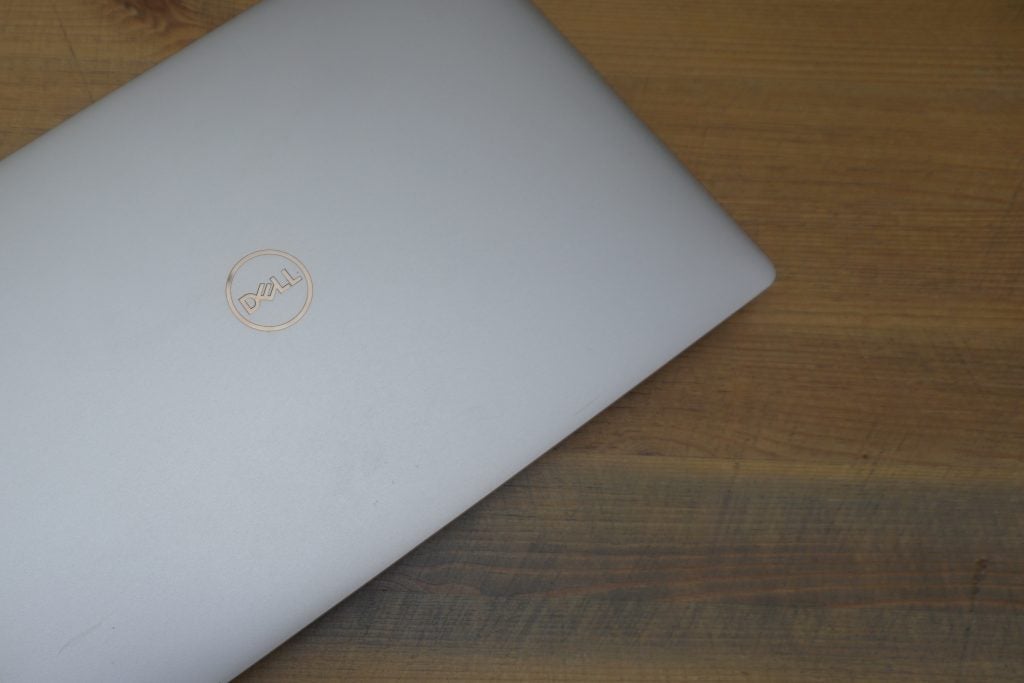 If you’re after an excellent all-round Windows 10 Ultrabook then you’ll struggle to do better than the XPS 13. It doesn’t present a huge step forward on 2017’s model, but the changes that Dell has made are uniformly positive.

The only slight downside is that Dell still hasn’t addressed its two biggest issues: the lack of better graphics options, and slightly lacklustre coverage of the creative colour gamuts.

However, these omissions are forgivable given the XPS 13’s £740 starting price, which makes it significantly cheaper than its arch-rival, the MacBook Pro, whose basic configuration retails for over £1000.

The XPS 13 is the best all-round, small-form-factor Windows 10 laptop you can buy, but it isn’t quite perfect.