On the tablet’s left side, you’ll find a 3.5mm headphone jack just above a volume rocker. At the top there’s the power button and a massive plastic-hinged flap which covers a MicroSD card slot and a blocked-off SIM card slot, which is interesting as we haven’t seen an available XPS 10 configuration with mobile broadband. This element of the 10 looks and feels really cheap, but we guess you shouldn’t need to access it too often. We also kind of miss a rotation lock switch. 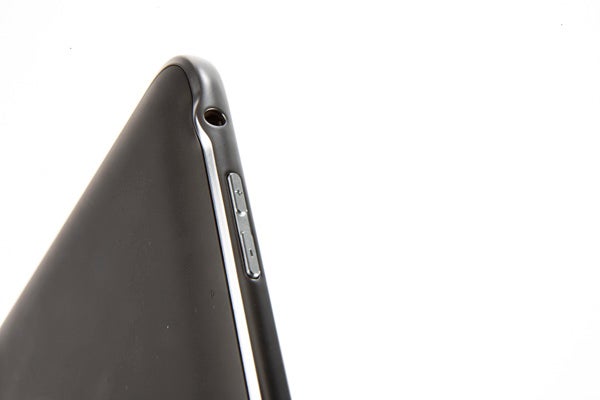 The Dell XPS 10’s right is left clear, while at the bottom we have the usual proprietary charging/data port and a micro USB port. Interestingly, this port sports a square shape which at first made us think it was a weird proprietary connector. It also makes it difficult to tell whether you’re inserting a cable the right way round, and did we mention how we hate USB ports being at a tablet’s bottom? Try leaning your tab on a table while there’s a memory stick or peripheral plugged in, and you’ll know exactly why.

Especially on a tablet without the tapering edges of some rivals, we would really have liked to see a full-size USB port on one of the XPS 10’s sides. But at least Dell (like Asus) provides a microUSB to female full-size USB adapter. Wireless is a little sparse, with Wi-Fi N and Bluetooth 4.0, but no NFC or optional 3G. 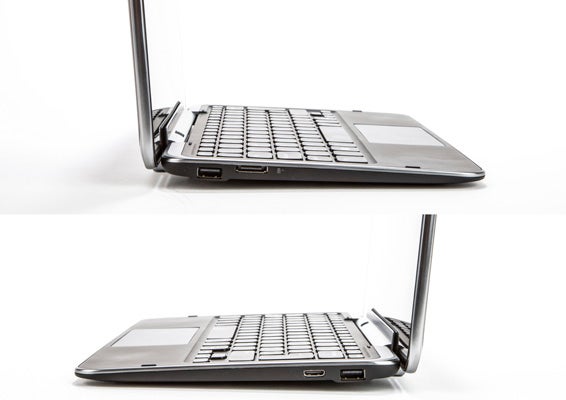 Of course, the dock also extends this convertible tablet’s connectivity greatly. On its left you’ll find a full-size USB 2.0 port and pass-through power connector. Its right houses a second USB 2.0 port and micro HDMI, for which Dell kindly provides an adapter to full size. All that’s really missing from our wish-list once you throw the dock into the equation is a full size SD card slot.

It’s when we get to the keyboard that 10-inch tablets most often fail. From the Asus Vivo Tab RT to the Acer Iconia W510, they tend offer a slightly cramped and unpleasant experience. This is where the Dell XPS 10’s keyboard dock really impresses – at least once you disable the touchpad, which made typing a trial in frustration. 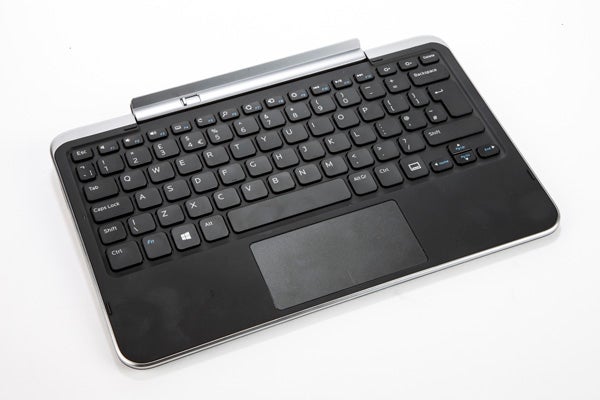 Finished in a similarly soft matt black plastic that feels great under your fingertips and prevents them slipping off keys, the XPS 10’s keyboard also offers fantastic layout. Every key is the right shape, well-spaced, and exactly where you would want it to be. A full-size right-shift key is especially appreciated, as it’s the most common victim on smaller keyboards.

Key feedback is on the good side of average, with a decent amount of travel and a subtle but noticeable click. Overall then we’re going to crown the Dell XPS 10 joint winner along with the Microsoft Surface, though we haven’t yet had the chance to test Samsung’s keyboard dock for its ATIV Tab. Just a shame about the necessity of turning that touchpad off, but on a touchscreen device this is less of an issue.

The ‘buttonless’ touchpad is large and offers a similarly pleasant soft surface as the rest of the Dell XPS 10. We found it wasn’t always as responsive as the best of the rest, but generally it held up okay. The ‘buttons’ aren’t that good either; clicking on this pad is fine if you’re a tap-to-click kind of person, but otherwise performance is variable, especially towards the integrated buttons’ outer edges. Then again, unless you finger type it will be turned off anyway. 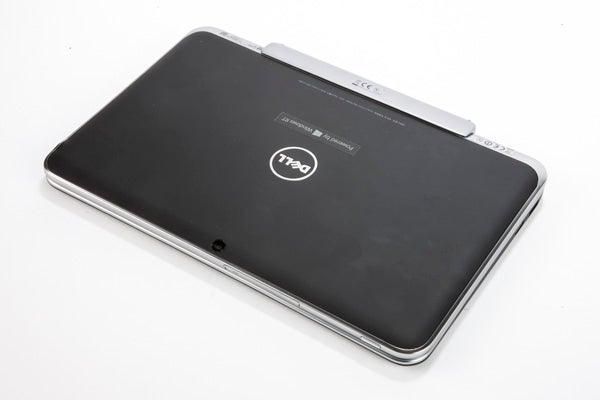 Thankfully, we have no complaints about touch on Dell’s XPS Windows RT tablet. Obviously, this OS with its Modern UI was designed for finger-control, and the screen’s relatively lowly 1,366 x 768 resolution ensures that, even in the Windows 7-like RT desktop, elements are rarely too small to tap. Like most Windows RT and budget Windows 8 touch-screen hybrids, the Dell XPS 10 ‘only’ supports 5-point touch, but this should be more than adequate for the average user’s needs.