Apple’s iPads capture headlines thanks to its brand, buzzwords and sales figures, so rival manufacturers have to innovate elsewhere if they want to compete. The Dell Venue 8 7840 takes charge by beating the iPad in one noteworthy category: slimness.

This is the slimmest tablet commercially available, but that’s not the only reason why the Venue turns heads: it’s also got three cameras and a 2,560 x 1,600 AMOLED screen. 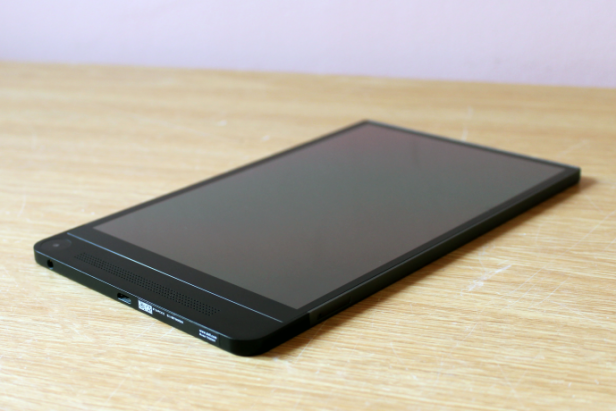 The 6.1mm body isn’t the only bit of slick design. It’s a sharp-looking slab of aluminium with tiny borders around three edges and a thicker area at the bottom with a 2MP front-facing camera and a speaker grille. The aluminium back has three more cameras designed for one of the Venue’s key features – RealSense.

The 6.mm body impresses, but it doesn’t shave much off rivals – it’s 1mm slimmer than the current iPad Mini, and only half a millimetre ahead of the Samsung Galaxy Tab S 8.4. It’s a good boast, but it doesn’t make much difference in the real world – especially when many people use cases.

The Venue is less convincing on the scales. Its 305g weight is less than the 331g iPad Mini 3, but the Google Nexus 7 and Samsung both duck under 300g. 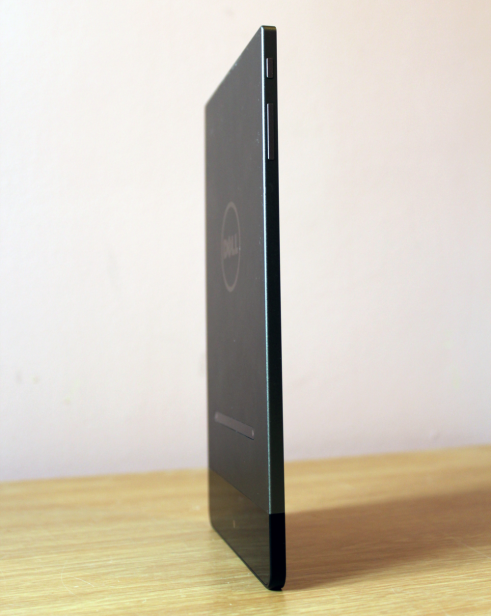 The slim dimensions and sharp edges mean the Venue looks excellent, and suitably different from the competition, but they also mean the Venue isn’t as comfortable as some rivals. Those sharp edges can dig into hands, and the borders are so thin that it’s possible to accidentally trigger the screen when you’re holding the tablet.

The larger bottom border is a double-edged sword; its width makes the Venue easy to hold in portrait mode, but you’ll have to stretch your thumb across the aluminium when working or gaming in landscape position.

It’s not the only niggling design issue. The power and volume buttons are unobtrusive in portrait mode, but they can get in the way when the tablet’s being held in landscape mode. Our hands often got in the way of the cameras when we switched the tablet to landscape to snap pictures – irritating, even if Dell’s camera app gives an obvious warning when this happens. 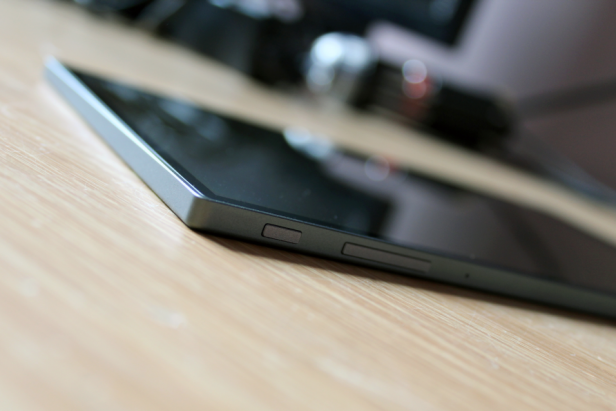 The density figure isn’t just an empty boast – it’s one of the sharpness tablet screens we’ve ever seen and, out of the three other machines we’ve mentioned here, only the Samsung is able to compete.

The Venue’s incredible sharpness is matched by great quality elsewhere. It’s an AMOLED panel, so black levels are excellent, and contrast is top-notch; colours are rich and punchy rather than vivid or oversaturated, which means that games, films and pictures all look stunning. 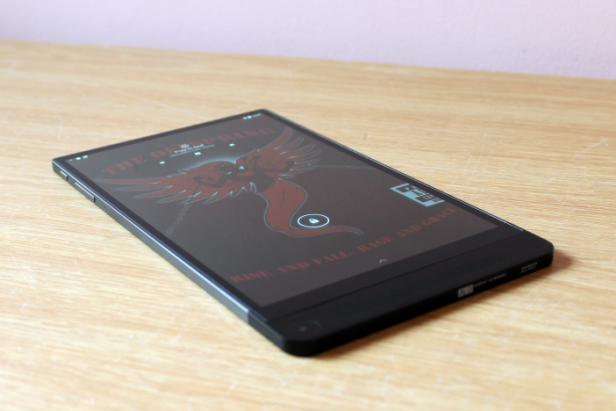 The measured brightness of 228 nits is good – ample for indoor use and enough for the outside, too. Viewing angles are excellent; we viewed the screen from all sorts of positions without losing much sharpness, brightness or colour accuracy.

It’s not perfect, but problems are minor. White tones are affected by a slight yellow tint but, it’s not obvious in daily use. The screen is glossy, too, although that’s shared with every rival.

The screen’s clarity and colours mean movies look great, and they sound good too. The stereo speakers have good balance, with a top-end that’s crunchy and nuanced and bass that has a reasonable kick without overwhelming everything else. They’re up there with audio kit on the other tablets, even if their off-centre positioning is irritating in landscape mode.