At Intel’s annual developer forum, IDF 2014, the CEOs of Intel and Dell showed off the Dell Venue 8 7000. It is a razor thin tablet running Android that comes with a stunning  8 inch, 2K screen.

So far so good, but what makes it special enough to get an unveiling at Intel’s developer event? Well, it is the first tablet in the world to incorporate Intel’s RealSense, a 3D camera that comes with all sorts of tricks up its sleeve.

Dell CEO Michael Dell claims that the Venue 8 7000 is the world’s thinnest at just 6mm. We can believe him. Hold it in hand and it feels impossibly thin, thinner even than Sony’s Xperia Z tablets and it looks great, too. 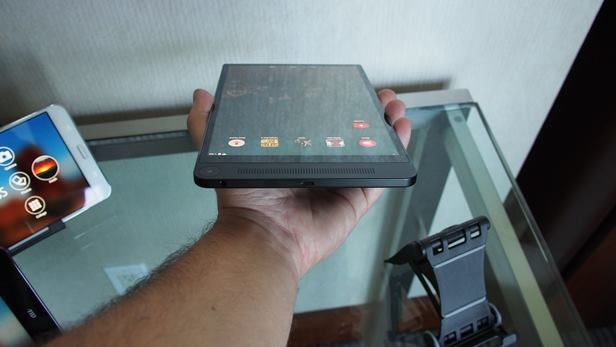 It’s light. Although we weren’t told the exact weight (Intel and Dell remain tight lipped about the exact specifications) it feels like it could also be one of the lightest 8-inch tablets around. In fact it felt lighter than plenty of 7-inch tablets I’ve used.

Regardless it feels robust enough, helped by the metallic chassis, and is comfortable to hold. I only did so for 15 minutes but it’s hard to imagine that something so thin, light and well balanced will tire your arm. 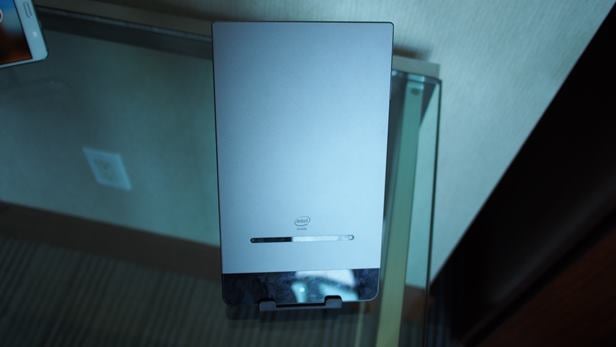 Less successful are some of the other design choices Dell has made. While the bezels are thin around three sides, the fourth is about an inch thick and houses RealSense, the speaker and a front facing camera. It’s meant to be used as a handhold, but try as I might I kept covering one or both of the cameras with my palm or fingers.

The Dell Venue 8 7000 doesn’t seem to have a natural position that works, but it might just be that it takes a little getting used to, just like the back buttons on the LG G3. There’s no knocking the screen, though. It has real colour richness and deep blacks as well as packing a serious number of pixels. In fact, Dell claims it has the highest DPI of any tablet currently on the market.

This is one of the growing army of Android tablets powered by an Intel processor. Intel’s recent Atom processors are as happy running Android as they are Windows and we experienced no slowdown opening apps or scrolling through menus. The model we were testing is still a prototype so I was expecting to see some issues, and they came in the form of the performance of the RealSense camera. 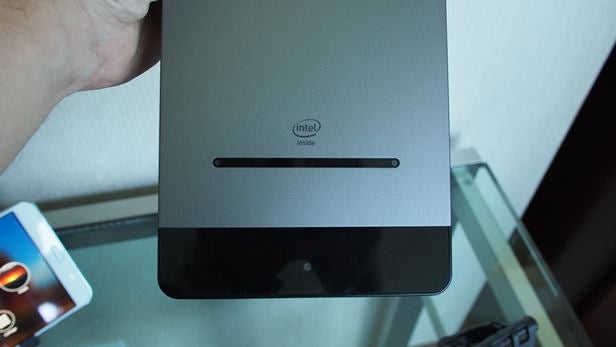 Being a 64-bit processor means that the Venue 8 7000 will be raring to go when the 64-bit Android L finally gets released. It’s a statement of intent from Intel that it has processors ready for Android L where Qualcomm’s 64-bit Snapdragon 810 isn’t yet in any devices.

I first saw Intel’s RealSense camera at CES this year and it is an impressive piece of kit that might just make having a camera on the rear of a tablet sensible.

RealSense is a 3D camera and works a little like the Xbox Kinect and Amazon Fire Phone. Dual cameras combined with an IR sensor are able to take pictures with depth, and this is useful for all sorts of reasons. Aside from being able to use gesture controls to interact with a tablet or laptop you are also able to tinker with an image after taking it like never before.

For example, the Dell Venue 8 7000 can recognise the different positions of objects. So you can decide to apply effects to the background but leave the foreground as is. Or apply a parallax effect to a pic. Instagrammers will feel dizzy with the possibilities. 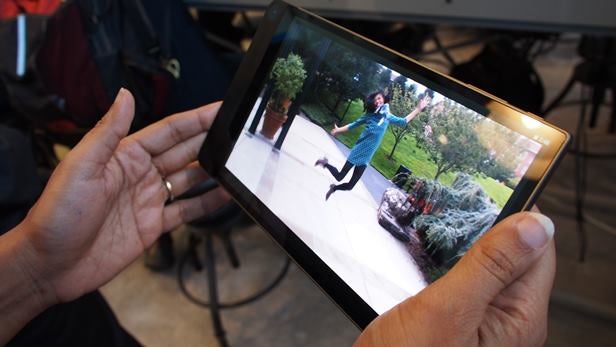 There are a lot more practical applications that already exist too. For example you can figure out the actual distance between one point and another in a picture. Traditional 2D photos lack perspective. Like Dougal from Father Ted, it’s difficult to tell the difference between a small toy cow that is up close and a cow that’s in a field far away.

The RealSense camera is also fantastic at creating images for use with 3D printers. Anyone has drudged through stitching together scores of 2D images to make a 3D one will know how painful a process it is. The Dell does it in seconds and to a good level of detail. You can also measure a package in seconds using an augmented reality measuring app. It’s all very clever and we expect developers to have a field day creating apps for it. 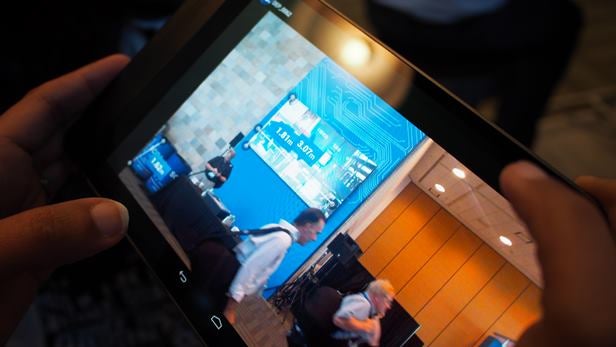 The Dell Venue 8 7000 is the first tablet to come with RealSense and while it was problematic in use we’ll chalk up some of the issues to this being a preproduction model. Some of the issues we experience included some hefty post-processing times and the camera struggling on occasion to discern the object we were shooting.

This is undoubtedly a special tablet. Thin, light, powerful and the first with RealSense, Dell may be on to a corker if the preproduction kinks get ironed out. We need more time with it before we decide whether RealSense is as good as we think or whether the camera locations are a mistake but we’re looking forward to finding out.