The Venue 10 Pro 5056 is the updated version of Dell’s professional Windows tablet range. The 10-inch slate aims to offer buyers the full Windows 10 user experience on a travel friendly mid-sized tablet. Compatible with a range of accessories that includes a folding keyboard dock, it can also double as a hybrid device.

However, with an Intel Atom processor under the hood, performance is going to be some way behind the likes of the Microsoft Surface Pro 4. But its Full HD screen and claimed 11 hours battery life partially make up for this and make it a perfectly serviceable tablet.

Dell hasn’t changed its Pro tablet device design in years, but it’s still looking pretty sharp. Its front is all black and glass with soft-touch black plastic sides and rear; there’s nothing esoteric here. The back has the Dell logo and a few bits of information scrawled in deep grey text but largely it’s a classy, minimalist looking bit of hardware. 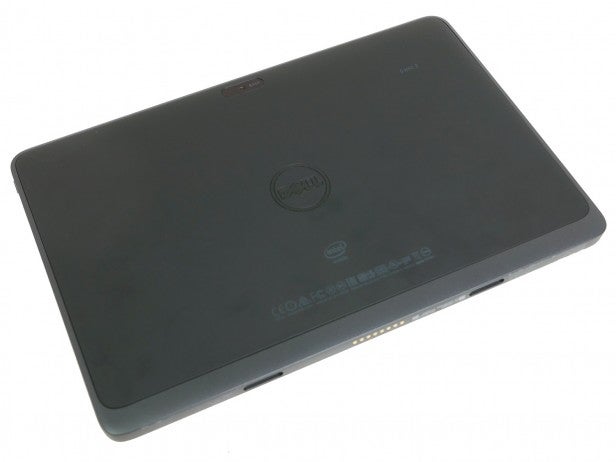 Despite its chunky design, it doesn’t feel particularly well built. The plastic back is removable so flexes and rattles a little when pushed, which is a far cry from the aluminium unibodies most premium tablets use. There’s not actually all that much that’s user upgradeable underneath either – you can’t easily add in an M.2 SSD, for example – but from a business point of view the easy access will make servicing a lot more simple.

Otherwise, the most notable thing about this tablet’s design is that, like Android and Windows tablets but unlike the iPad range, the Venue 10 Pro 5000 is designed to sit in landscape rather than portrait.

As such the stereo speakers fire out of the sides while the bottom edge is loaded with connectors for attaching to a dock or keyboard. 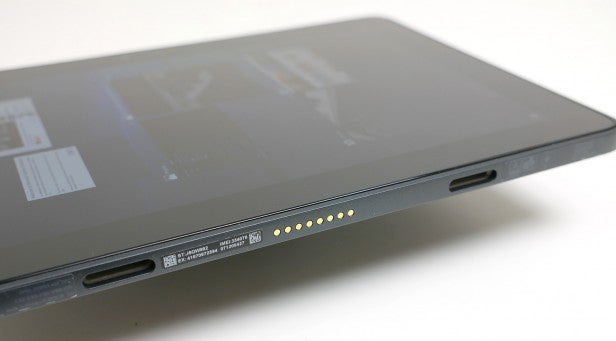 Along with the sheer size of the thing, this makes the Venue 10 Pro a bit awkward to hold one-handed. Instead of having your hand rest along the side of the tablet as it would when held in portrait mode, it’s easiest to hold it from the bottom edge or with your whole hand splayed out behind the tablet. However, you then have to move your hands to the sides to type two-thumbed.

Features wise, there’s a front-facing 5-megapixel camera and a rear-facing 8 megapixel camera. There are also separate buttons for power and activating the Windows menu but frankly they’re a bit mushy and not much fun to use. Wired and wireless connectivity is where this machine shines, however.

There’s a full-size USB port, a USB Type-C port that’s also used for charging the tablet, a microHDMI video connection and a microSD slot for storage expansion. Unlike the Dell XPS 12 you don’t get a Type-C to full-size USB adapter in the box, which is understandable since the full-size USB port should be plenty.

Such a range of ports really sets this tablet up well as a serious work tool. While the microHDMI might require you to remember an adapter, the full-size USB makes it easy to share files using USB sticks or even plug in a mouse and/or keyboard. Also, the microSD will make it easy to quickly access your camera’s pictures if you use a microSD to SD card adapter in your camera.

The tablet’s screen is a key selling point. The 10.1-inch IPS LCD panel packs in a Full HD-topping 1920 x 1200 pixels which makes for a relatively crisp 220 pixels per inch.

By default Windows scales the resolution by 150% so that text and icons are more readable but when needed the extra resolution is there to be called upon.

The 3:2 aspect ratio is also a sensible compromise between the overly wide and narrow 16:9 (1920 x 1080 pixels) of some tablets and the more squared-off 4:3 aspect of iPads, especially considering this tablet will spend the majority of its time in a landscape orientation. 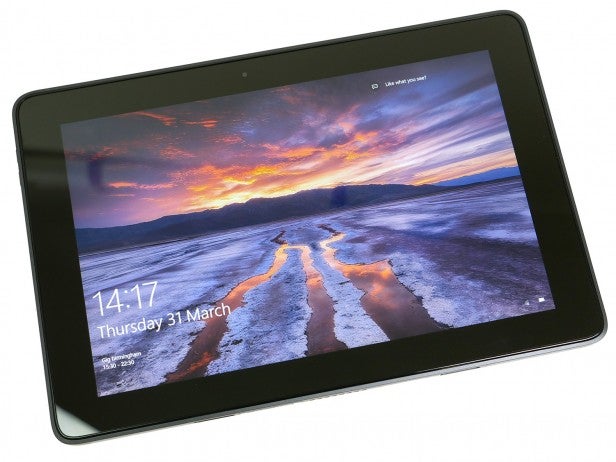 The screen is also good in terms of overall image quality, though it’s certainly not for design professionals. Colours look punchy and saturated while a good contrast ratio of 968:1 means there’s none of the greyed, washed-out look of lesser displays.

Overall brightness is also excellent, reaching 478nits – that’s nearly double what some lesser laptop and tablet displays can manage. Viewing angles are also excellent, backlighting is even and there’s no hint of backlight bleed.

The only stumbling block is its ability to display just 65% of the sRGB colour space. This means it isn’t really suited for fine imaging or video work – but then you’d hardly expect that of such a tablet. This is also reflected in the Delta E score which is just 5.02, which is about par for the course for non-professional-level screens.