What is the Dell UltraSharp UP3216Q?

Dell’s latest monitor is a heavy-duty 4K panel that spreads its 3,840 x 2,160 resolution across a 32in diagonal. It’s designed for the office, which means that hefty pixel count is paired with corporate features: screen modes for industry-standard colour gamuts, card readers and USB ports, and plenty of versatility.

There’s no denying that this £800 monitor is expensive, which means it will have to work hard to justify its price. This is especially true when there are a number of cheaper monitors out there – and high-end competition isn’t exactly lacking, either.

This high-end work panel arrives with an impressive 4K resolution, but this isn’t all that catches the eye – it has a vast range of features, too.

For starters, this screen features colour spaces designed for a variety of office tasks. According to Dell, the panel displays 99.5% of the Adobe RGB colour gamut alongside 100% of the less-intensive sRGB gamut. The company also states that the UP3216Q is able to handle 100% of the REC709 standard and 87% of the DCI-P3 gamut too – two rarer industry-standard measures that are popular in content production. 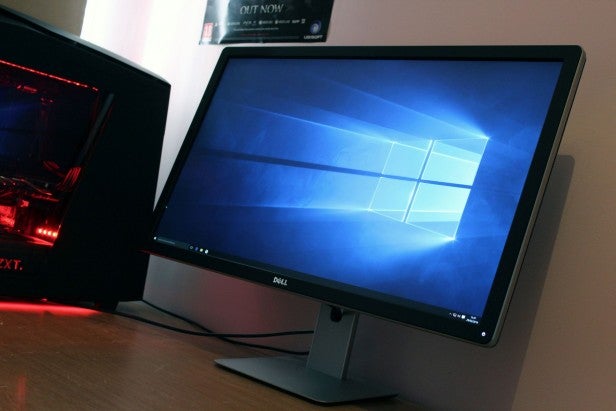 Those figures immediately lift the Dell above its key rival – on paper, at least. The Samsung U32E850R claims that it displays 97% of the sRGB gamut, but it can handle only 80% of the Adobe RGB gamut. It also doesn’t include any of those industry-standard modes.

In order to improve colour accuracy further, Dell claims that each of its UP3216Q panels leaves the factory after being calibrated to achieve a sub-2 Delta E average. The UltraSharp UP3216Q is also a true 10-bit panel, which means it can display 10.97 billion colours – significantly more than the 16.7 million that can be produced by the 8-bit Samsung.

On a more mundane level, the UP3216Q continues to impress. That 4K resolution and the 32in diagonal mean the Dell delivers a density level of 138ppi – virtually the same as the Samsung, and better than most 1080p and 1440p panels.

That pixel density is a double-edged sword, however. The detail level results in pictures, text and icons that are pin-sharp, which is paramount in tasks where precision and detail are required. However, since the icons that appear on the Dell are so tiny, Windows’ scaling options will need to be used to get the OS to a comfortable size.

Dell has used an IPS panel for this screen – Samsung uses similar PLS technology – which usually produces the best colour accuracy. But the trade-off is slow response times and black levels that aren’t the deepest. The panel is coated with an anti-glare finish, which will make office use easier. Matching the Samsung, it has a 60Hz refresh rate.

With this panel Dell has included an SD card reader, four USB 3 ports, a single upstream USB connector and an audio output, which is a reasonable selection. Samsung’s screen offers the same kind of USB versatility, but no card reader. 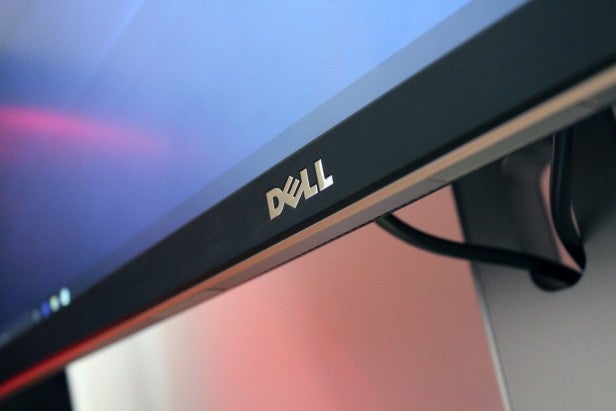 The UP3216Q is an impressive work panel, although Samsung’s monitor is better for gaming since it includes AMD FreeSync – a technology that eliminates screen tearing by syncing the monitor’s refresh rate with a graphics card’s frame rate.

The two monitors look different, although preferences here are subjective. The Samsung is darker, with a black finish on its base and stand and metallic colours confined to the rear. Meanwhile, Dell’s monitor opts for a metal finish on its base and around the panel. The base doesn’t have quite as much style as Samsung’s curved unit, although that’s no surprise – the UP3216Q is designed to let its screen do the talking.

The UltraSharp comes with a decent selection of movement options considering its size. There’s 90mm of height adjustment, and the circular section in the base allows the panel to swivel left and right. It can tilt forward and back, and it’s compatible with 100mm VESA mounts.

However, it falls short of the Samsung: the U32E850R has 130mm of height adjustment, it tilts and swivels, and it can also be used in portrait mode.

At least the Dell is smaller and lighter than its rival. The UP3216Q’s 8.6kg weight is around a kilo less than the Samsung, and its 572mm maximum height makes it about 50mm shorter. The Dell is 214mm deep, while the Samsung is 279mm deep – so it’ll sit easier on a cramped desk. The UP3216Q is sturdy, too – I never had concerns about its build quality or stability.

Dell’s screen is good on connectivity. Its HDMI 2.0 port can handle 4K at the screen’s maximum 60Hz refresh rate, and it has a DisplayPort and mini-DisplayPort too. Alongside those three ports Samsung includes an HDMI 1.4 socket too – although given that it can handle only 4K at 30Hz, I’m not sure why it’s included. 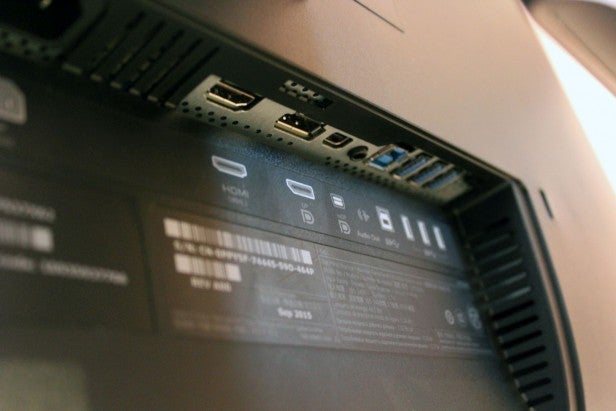 The Dell has a sensible, no-nonsense on-screen display. It’s smart and well organised, which is impressive given the wealth of options. There are sections for colour management, power consumption, inputs and on-screen tweaks, and the quartet of quick-access keys that load before the main menu are customisable.

It’s fast to respond to touches, which is important, and the menu has several different columns for nested options. That makes deep-level settings easier to access while still letting the user know exactly where they are. It’s perhaps not as pretty as the Samsung OSD, but that’s a minor concern.