This is getting silly. We’ve had 24in displays for a while now, which is why both NEC and Acer have starting offering 26in displays. Dell however, was clearly a bit miffed that it, the company that introduced the concept of the large, affordable monitor, no longer had the biggest toy in town. As a response it’s launched the 2707WFP, a 27in display. Boys will be boys. 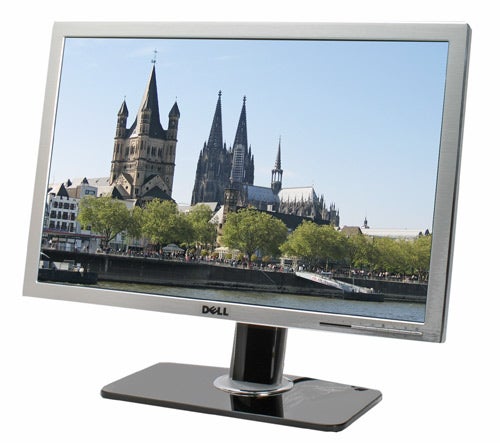 Dell does of course have larger screens – it has just released its second generation 30in display, but these have a higher resolution of 2,560 x 1,600. The physical size and resolution of the 30inchers is such that they’re out of the price range of most, especially as the resolution means that if you want to play games on it, you need serious horsepower to run them acceptably at native resolution, which only adds to the already high cost. What’s more you need to use a dual-link cable just to run the thing. A 30in display then is like a fast car, expensive to buy and with high running costs.


The 2707 is a possible solution – you get the large sense of scale but at 1,920 x 1,200, the same as the 24in and 26in displays of this world, you only need one card, albeit still a powerful one to run it in 3D. On the downside, going larger than ever before without increasing the resolution means that the size of the pixels is larger than before, which in theory makes for a less sharp image. Will this be a problem when it comes to image quality? 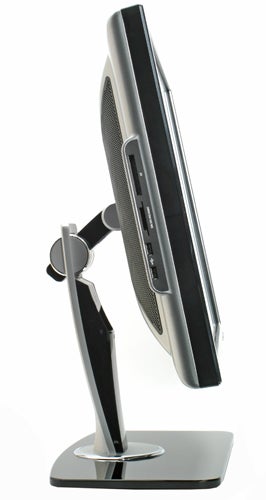 As far as I’m concerned the answer to that one is no. I found the Dell to be sharp and clear – considerably more so in fact than the Dell 2407 I have next to it. While the 24in was a decent monitor at the time, in terms of picture quality it has since been bettered. The first time you see it though, it won’t be the image quality of the Dell that will hit you most – it’ll be the blinged out design. While Dell monitors have favoured understated black bezels and dull silver stands, the 2707 is a marked departure – a large brushed silver bezel, a shiny metallic Dell logo at the bottom centre and an expansive shiny black stand. It screams out – “look at me, I’m a big flash monitor” – and why not I say – a 27in display is hardly going to be a shrinking violet, and if you’ve got it, flaunt it. The OSD buttons at the bottom right have also received a design makeover in keeping with the rest of the display. The six silver buttons are thin and elongated rather than round, which I prefer, while the yellow light has been replaced with a couple of blue ones, which offsets the silver very nicely.

The Dell OSD itself hasn’t really changed much – and I’ve sort off gone off it. To move up and down menus you have to move left and right to make selections, which is counter-intuitive. It’s also too basic, with no settings for colour temperature, just Normal, Blue, Red and custom and no gamma settings either – you have to make adjustments in your graphics display driver. It does have some improvements though – you can now control Contrast levels as well as brightness, though that was just a ridiculous omission from the 2407. It also has direct buttons on the front for PiP and PaP, which is handy – say for checking on a download while enjoying a blast on the Xbox 360. 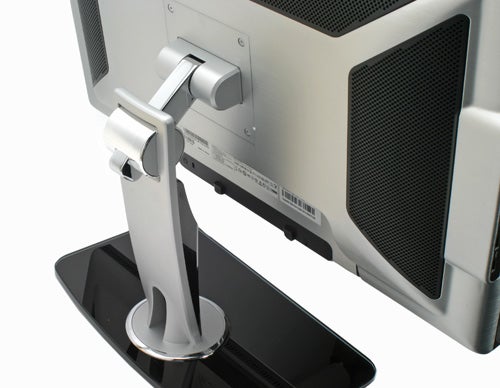 The build quality is also a step up from the 2407 – the stand in particular is impressive. It offers a good range of height adjustment, which is pleasing, but it doesn’t just go up and down – as you push down it comes forward slightly as well – it just has a better feel to it. It also rotates nicely on its stand but it can’t pivot, so if that’s something you’re looking for the 24in Dell will serve you better. One thing to mention is that at 12.5Kg this display is actually on the heavy side for an LCD, not just because of the size but because of the materials, so you’ll need a tad more effort to lug it than you might expect.


As with the 2407, the 2707 has slots and ports galore. On the left hand side you’ll find a compact flash card slot and another that will accept SD, MMC, Memory Stick (full size) and the rather old Smart Media. Beneath this are two USB ports, which come into play one you’ve plugged in the USB upstream USB socket at the rear. Also round the back you’ll find two more USB ports, Composite, S-Video, Component, VGA and DVI, the latter of which is HDCP capable. HDMI is missing however, with Dell yet to introduce this to its monitor range. There are VESA sockets for wall mounting. 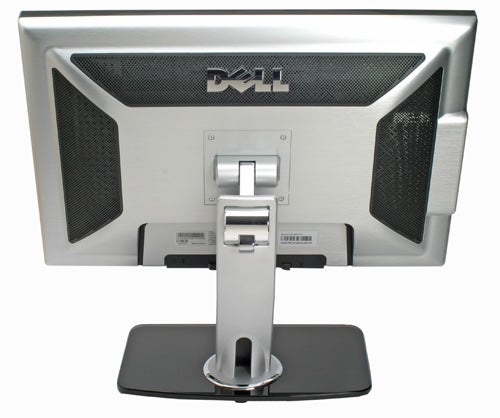 The Dell employs a Samsung LTM270M1 S-PVA panel in the 2707WFP with a claimed contrast ratio of 1000:1, a brightness setting of 450cd/m2 and a response time of 6ms grey-to-grey or 16ms fully on/off. The panel is an 8-bit display so can show the full range of colours – important for photographic work.

Out of the box the colour vibrancy was quite over the top. It was excessively bright and colours were more than intense, they were radioactive – especially the bright orange of the TrustedReviews colour palette. However after some manual tweaking I managed to get the monitor to display an acceptable picture that was more accurate and far easier on the eyes. Now most people will not have a hardware colour calibrator in their possession, especially those who will be looking at Dell monitors. In its stead though, you can at least do some calibration by eye to get the best from your purchase – especially when you’re spending this kind of money. Even going through the image optimisation wizard of your graphics card will reap large dividends. 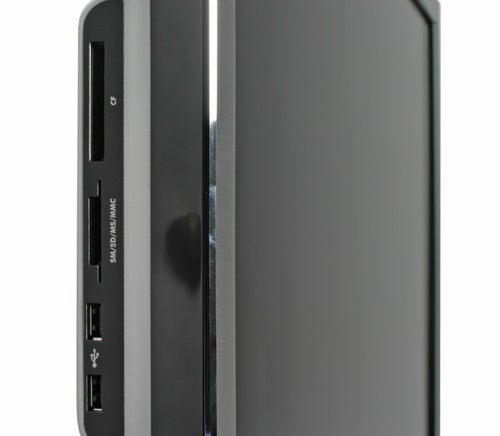 To get the most from the monitor I actually had to spend quite a lot of time optimising it to find the right settings. The panel has a brightness rating of 450cd/m2 but I had to turn it right down to make it liveable with. I finally reduced the brightness right down to 7/100 and the contrast down to 46/100 – which made a major difference to performance. Adjusting the gamma settings also had a great impact, bringing out much more detail. Once done the brightness was manageable, the contrast was much improved too and colours were far more natural – it went from being a bad display to a pretty good one.


Once these tweaks were completed, the monitor gave a decent account of itself when it came to picture quality. In the DisplayMate tests the 256 Intensity Level Colour Ramp was pretty smooth though there was still some banding visible on the green colour. The Colour Scaling test showed even fading all across the board but also revealed a slightly dirty look to the colours on this test. The White level saturation and the Grey-Scale Compression tests showed that there was just about enough contrast on hand after tweaking, though I’ve seen better. Otherwise colours are good, particularly the reds, which are quite deep. Despite the higher pixel pitch text sharpness was very impressive, so text was fine. 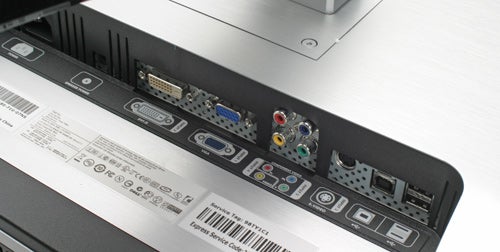 Looking at a range of photos, there was a pleasing amount of detail visible, with the textures and ripples of a jacket visible on the 2707 that were less distinct on the 2407. It has to be said that simply being larger that my 24in screen helped here to a degree.


Moving to gaming, I pulled out the old stalwart, TrackMania Nations. The colours were accurate, quite neutral and the fast motion was handled adequately. Response time freaks might find cause to complain but I’d have no problems gaming on this monitor. I hooked up an Xbox 360 to test component and VGA. I discovered that the display cannot accept a 1080p input – 1080i is your limit. There is a 1:1 pixel option in the OSD but over component this created black lines down the sides and well as above and below, which indicates that it wasn’t actually 1:1.

Over VGA however, 1:1 worked fine – so I’d say that for Xbox 360 gaming a VGA cable would be worth picking up. Image quality was a touch softer over VGA and component but that’s what you’d expect compared to DVI. If you want, there is an optional soundbar available so you can just attach speakers for sound.


I’d rate this as a good display for video but not outstanding. Black levels weren’t quite as deep as I hoped and despite my tweaks there was still more greying over than I would have liked. Overall, though, you can sit back and enjoy a monitor that’s likely to be as large as some people’s main TVs. 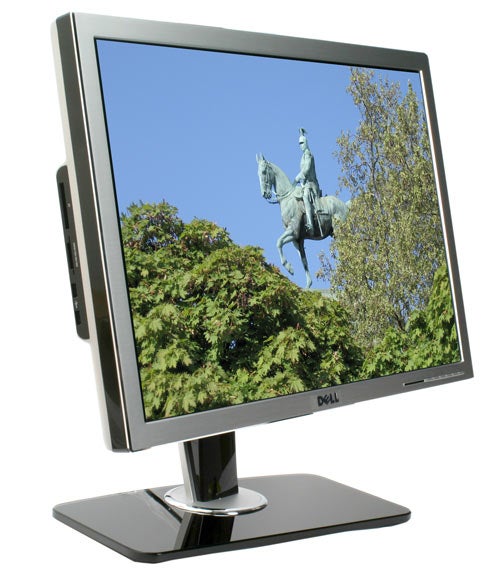 Ultimately, the 2707FWP is a good monitor, but not a perfect one. I feel it works best as a PC display connected over DVI, with occasional console gaming thrown in. It’s loud silver design might not appeal to all and it can deliver a satisfying picture but only as long as you spend time setting it up for your environment, though that’s true of most monitors. I can’t really justify recommending it as a 27in display isn’t really needed – it’s just a pure luxury and the design of the Dell reflects this. The price is closer to the 24in than the 30in, as you would expect and if you feel like pushing the boat out then go for it – you’ll certainly get a reaction when your mates see this thing in your study.


The Dell UltraSharp 2707WFP is a large brash monitor that will really make an instant impression on your desk – it’s up to you to decide if it’s one you want to make. It offers a comprehensive range of connections and although it doesn’t have HDMI it does have an HDCP enabled DVI port. It takes some time to set it up and get the best from it but, once this is done, it delivers a bright, sharp and colourful picture.