This isn’t the first time we’ve looked at the Dell Studio XPS M1340; we first reviewed it way back in February when it first launched. At the time it turned out to be a frustrating nearly man. It promised a great deal and initial impressions were favourable, but niggling build quality issues and a mediocre keyboard left doubts in our minds. So, now that you can buy a version from PC World and other DSGi stores, it seems as good a time as any to see if Dell has rectified these issues. 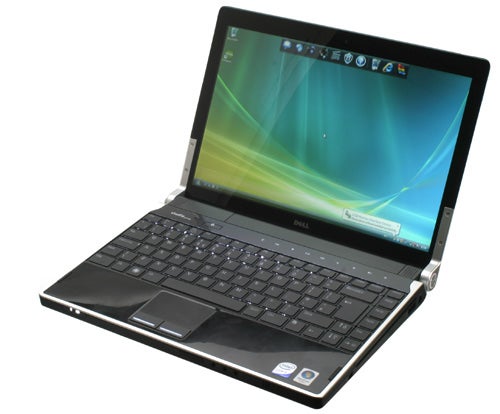 At £899.99 the M1340 isn’t going to be everyone’s idea of a bargain, but for the money it does offer an impressive list of features. This includes a backlit keyboard, a free-fall protected 7,200rpm hard drive, a slot-loading DVD drive and a roster of video outputs that includes not only HDMI and VGA, but also DisplayPort. It also means a 13.3in form-factor that combines processing power and portability into one formidable package.


However, somewhat disappointingly, this retail version of the machine doesn’t come with the LED backlit display. This means regular CCFL backlighting that isn’t as bright and adds weight. Thus, whereas the configuration we saw in February weighed a reasonable 2.1kg, this one comes in at a heftier 2.3kg. Not a massive difference, but one you’ll come to notice over time. 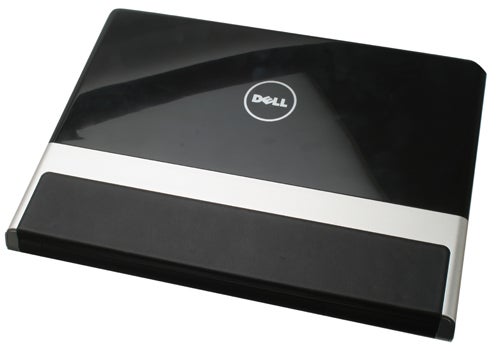 This disappointment is tempered when you glance at the technical specification. Running things is one of Intel’s higher-spec processors; a Core 2 Duo P8600 clocked at 2.4GHz with a 1,066MHz front-side bus and 3MB L2 Cache. It’s considerably faster than the Core 2 Duo T6400 seen in the likes of the HP Pavilion dv3-2055ea or Samsung Q320, while also consuming less power – just 25W versus 35W.


This is matched with 4GB of 1,066MHz DDR3 and a very fast 7,200rpm, 320GB hard drive. As noted above this drive is also free-fall protected thanks to a sensor that locks the drive heads when excessive motion is detected. Completing the roster is Bluetooth, Draft-N Wi-Fi and Gigabit Ethernet. There’s also a webcam with dual microphones, not that this is anything to write home about these days. 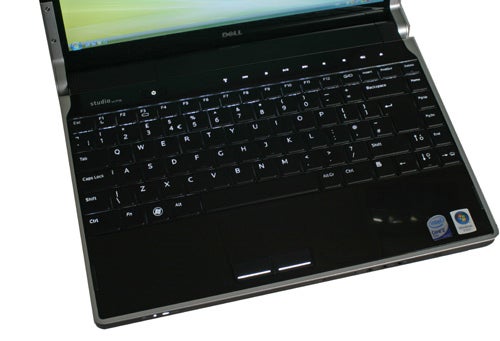 Much more interesting is Dell’s use of nVidia’s 9400M integrated graphics chipset. This is the same chipset found in the Apple MacBook line and also forms the basis of nVidia’s Ion platform – as found on the Acer Aspire Revo nettop. Unlike Intel’s own integrated graphics solution, the 9400M can play games at moderate settings as well as accelerating compatible applications such as the video encoding tool Baddaboom or Photoshop CS4.

Where outward appearance is concerned we’re still in two minds about the M1340. Its two-tone black and silver combination is a complementary one, but the abundance of glossy plastic is always a tad irritating and doesn’t feel as luxurious as the brushed metal and ‘microsatin’ found on its predecessor, the excellent M1330. Clearly Dell realised this and added the leather on the lid, but it still seems a slightly incongruous addition. 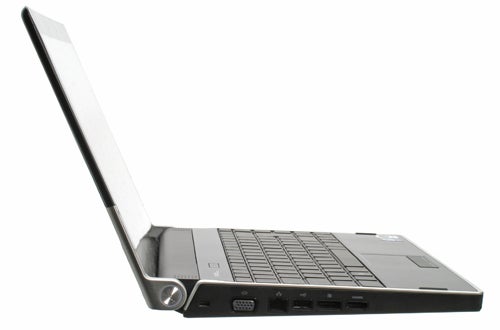 However, even with this caution voiced, the M1340 is still a nice looking laptop. Its angular lines look fresh in a market dominated by machines with rounded ‘tapered’ edges, the backlighting around the hinges is a very nice touch and visually it’s clean and unfussy. In some ways it’s the very antithesis of HP’s design ethic, which is generally a little more flamboyant – a fact that will no doubt attract many. We also love the power adapter, which is very thin and weighs less than 300g including the wires.


This time around the M1340 is much better bolted together, too. Gone is the irritating and frankly shoddy rocking base, as well as any hint of flexing or poorly connected panels. Whatever issues Dell had with the early production runs have clearly been eradicated, so you can buy with a lot more confidence now. 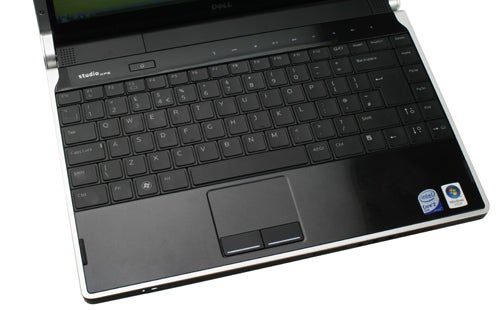 This is particularly true of the keyboard. Keys have a far more even action, not tilting quite so much when hit off-centre, resulting in fluent and error-free typing. It’s a fact aided by the excellent layout, something that didn’t need changing. Our only remaining niggle is keyboard backlight bleed, which is visible from certain angles. While Dell might deem it following the crowd to use an isolation keyboard, using one would have eliminated the problem entirely.

As highlighted earlier the M1340 offers more connectivity options than most, particularly with its trio of VGA, HDMI and DisplayPort video connections. These can be found on the left edge nestled among an Ethernet port and a USB port. Then, on the front where they can be easily accessed, are dual line-out jacks, a line-in and a memory card reader. There’s also an infrared receiver here, but unlike the HP Pavilion dv3 and the XPS M1330, no remote is supplied as standard – a baffling oversight to us.

Finally, on the right, there’s a mini-FireWire port, a 54mm ExpressCard slot, and below the slot-loading DVD drive, a USB and eSATA combo port. This is a slightly precarious place to have it and you may also have noticed that this leaves just two USB ports, which seems a tad stingy. It’s a problem you can probably work around, but a third port wouldn’t be asking a great deal.

One of the more disappointing aspects of this M1340 is its audio visual performance. On the audio side nothing has changed, which is a problem since the integrated speakers are pretty mediocre. They’re just about good enough for watching video on, but are too tinny and lacking in warmth for regular music duties.

However, in comparison to the previous system, it’s the display that’s more disappointing. In basic terms, it’s still a perfectly decent display and its 16:10 aspect 1,280 x 800 resolution will please the purists, but not only does it lack the brightness of the LED backlit version, it also has a slightly watery, dull appearance that means colours lack vim and vigour. This weakness is very evident in low saturation colours, which are poorly handled. With this in mind, you might want to consider the LED backlit (but more expensive) version available directly from Dell.

Since the CCFL backlight consumes more power than an LED one, another factor to consider here is battery life. The difference isn’t huge; the three hours, 42 minute Productivity runtime was only 13 minutes less than the previous M1340, but that difference increases to 28 minutes in the Reader test. It’s worth noting, too, that neither can match the HP Pavilion dv3-2055ea, which managed an impressive four hours and 10 minutes in MobileMark 2007’s Productivity segment.


However, the HP can’t match the Dell where raw performance is concerned and since it has more RAM and a faster CPU than the model we reviewed earlier in the year, the PC World M1340 is quicker still. Overall, the M1340 is quick enough to be deemed a genuine desktop replacement, since it can chomp through CPU intensive tasks like RAW image manipulation and HD video editing with some gusto. This performance is only let down by the lack of a 64-bit operating system, which is bizarre given it costs no more and would put the 4GB of RAM to better use. 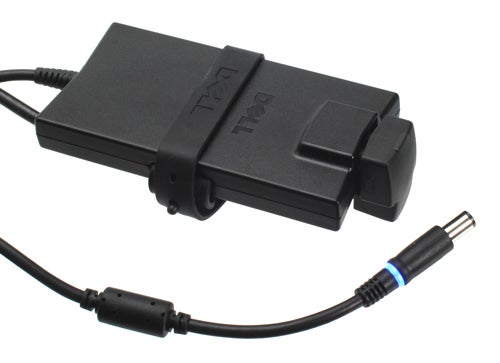 It’s also a reasonable gaming machine provided your demands aren’t too high. In Trackmania Nations it managed 47.2fps at medium settings, 27.3fps at the same level but with four samples of anti-aliasing, and a playable 21.7fps at high settings – all at the native 1,280 x 800 resolution. Ultimately the likes of ”World of Warcraft” and ”Spore” can be despatched comfortably, but more taxing titles will require more compromise like reducing the resolution. Under stress, the system gets warmer than most, but this is only really a problem during intensive tasks such as playing games or video editing – i.e. the kinds of things you won’t be doing while sitting on your sofa at home.


One final factor to consider here is how the PC World system compares to buying directly from Dell. This can be difficult to measure since Dell’s pricing tends to fluctuate, but at the time of writing the exact same system would set you back £913.99 from Dell, making this PC World version slightly cheaper. 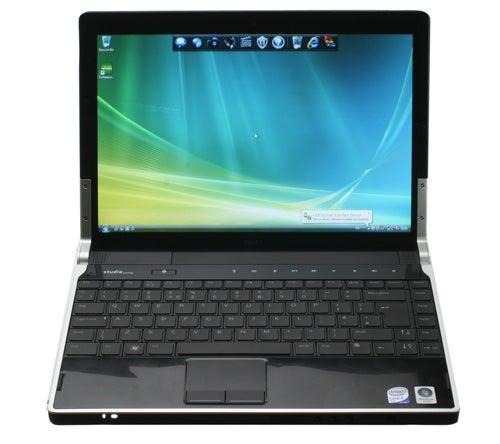 
Clearly Dell has rectified its issues with the Studio XPS M1340, which is a good thing. This retail system also delivers excellent performance and is slightly cheaper than the equivalent system from Dell, though it is held back by its 32-bit OS. However, while the CCFL backlit display is passable, knowing that the LED backlit version is so much better to view and is also lighter, makes it a near essential addition. This is still a great system, but if you’re able to spend the extra, buying from Dell and getting the LED display is recommended.

This is a very fast system. Its 2.4GHz CPU can handle intensive tasks like HD video editing and RAW image editing, making this an excellent option for the power user on the move.

This is a good result, but the CCFL backlight display means this M1340 suffers in comparison to one with an LED display. HP’s Pavilion dv3 offers even better battey life, making it a better option if you’re not too fussed about application performance.

The difference is greater in the low-intensity Reader test, however the Dell’s are closer to the HP in the test, where their more up-to-date processors benefit from a more efficient low-power state.

Two hours at full brightness isn’t too bad and reducing brightness should mean something closer to two and a half hours of playback – just about enough for most films or a few TV episodes.