After the success of Dell’s Studio laptop line it was inevitable desktop counterparts would follow and they’ve done so in style. Not only has the company introduced slimline Core 2-based desktops, but its Studio XPS range also offers Intel’s new Core i7 platform (codenamed Nehalem) in a compact case and at a reasonably compact price, too. 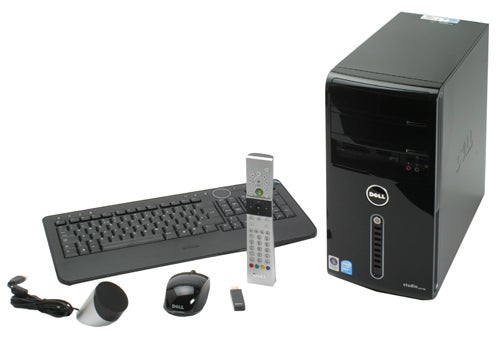 Studio XPS’ start at £749, but our particular configuration comes in at £879 without a monitor. For this outlay you get a pretty hefty system, including an Intel Core i7 920, 6GBs of DDR3 RAM, the TR award winning ATI Radeon HD 4850 and twin 500GB hard drives. But, before digging deeper into the computer’s innards, let’s just take a glance at its exterior and what comes with it.


You get a very decent bundle, unusually including DVI to VGA and HDMI adapters. There are two Dell full-colour quick-start guides; one details how to connect your TV tuner equipped PC to a set-top box or directly to cable/digital antenna, while the other deals with setting up your wireless mouse and keyboard. There’s also a full guide to setting up the computer, with clear illustrations along the way. Bundled discs include Windows Vista Home Premium 64-bit SP1, one with drivers and utilities, and another with Microsoft Works 9. 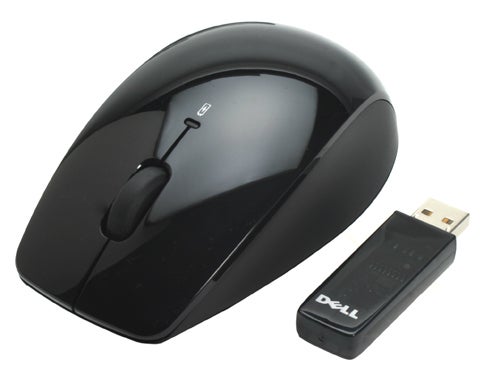 You also get a wireless mouse and keyboard, which both take a pair of AA batteries. These are the same as found on Dell’s other XPS desktops, such as the One and Studio Hybrid. Looking at the mouse, it’s ambidextrous and its glossy black top matches the machine perfectly. This top section is also removable, being held on magnetically, and removing this cover not only lets you change the batteries, but also clean any accumulated dirt that might have built up around the two-way mouse-wheel. Thankfully, the sides are curved and have a matte plastic finish, lending a good and comfortable grip. 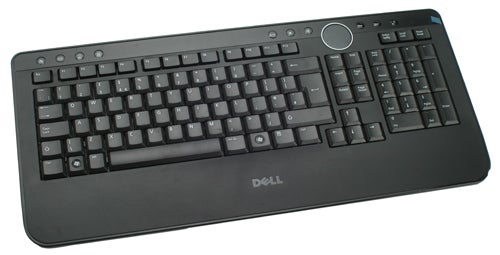 Even better, though, is the slim keyboard. It has a classy appearance, especially the flush volume control wheel, and it’s not half bad to type on, either. Build quality is certainly acceptable and key feedback is decent, if a bit on the light side. Dell’s media remote, which requires three AAA batteries, has sharper edges than we’re used to, but with a little care is comfortable enough. Button layout isn’t the most accessible either, some of the buttons are a tad small, but it’s still perfectly usable and fairly well-built.

Getting onto the PC itself, it’s a nice and compact minitower. Not only its dimensions, but also its look and feel, remind me very much of the Medion Akoya P36888. Not that that’s necessarily a good thing, since the Medion was a ‘budget’ machine. On the other hand, comparatively speaking, so is the Dell given the meagre price you’re paying for quite high-end components. 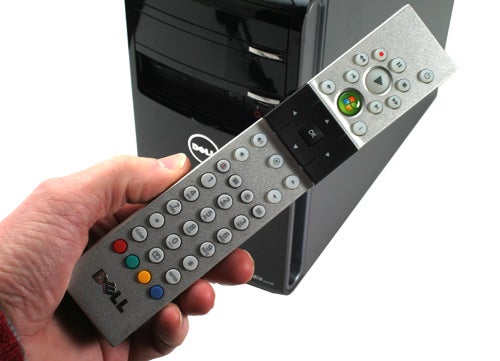 Similar to the Medion, the Studio XPS’ chassis is a plain metal box with a plastic front, which contains two drive-bay covers and a slide-down panel. Its main casing is better than the Medion’s, though, as there’s no sign of flex when pressing the sides in. One thing that is lacking, however, is the ventilation. There’s no fan-ventilation at the sides or top, just a 92mm fan at the rear and air intakes at the front running down both sides to provide some kind of air flow.


Meanwhile, the top of the machine is glossy black metal, which blends seamlessly with the piano-black front. Both drive bays have chromed buttons, which go well with the silver-ringed Dell logo and power button. When starting the computer up, the chrome power button’s backlight changes from orange to white, both of which look attractive. 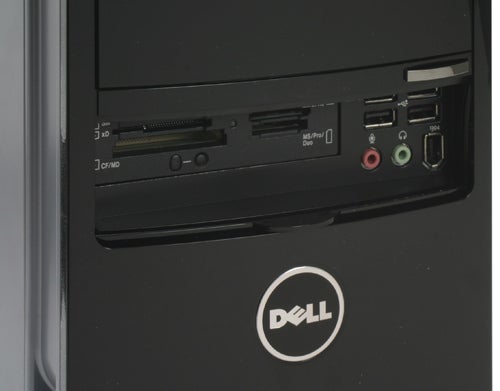 Only one optical drive is actually installed. Behind the top bay cover resides a DVD+/-RW drive, although since this is Dell it can be upgraded easily to Blu-ray for £80. Pressing the release button for the lower 5.25in bay does flex the whole plastic front, which leads to some concerns over the strength of the entire panel — a particularly destructive child could probably have some fun with it.


As already mentioned, there’s also a sliding panel similar to the Medion’s, except this one simply clicks down without the smooth mechanical action of that model. Behind this you’ll find four USB ports, a FireWire port, 3.5mm audio jacks for microphone and headphones, as well as memory card reader slots. 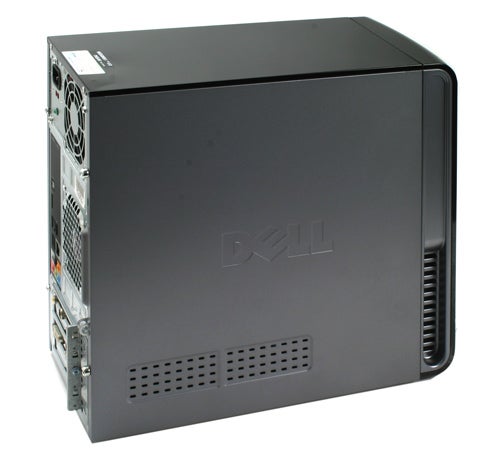 At the back is pretty much any connection you might want, headed up with S/PDIF for outputting surround sound digitally and eSATA for hooking up external storage in the fastest possible way. Below this we have another four USBs and a FireWire port, a Gigabit Ethernet port and 7.1 analogue audio outputs. You also get a Hauppauge TV tuner card that sports 3.5mm audio, composite, S-Video and antenna connectors, while the video card provides the usual complement of twin DVIs. 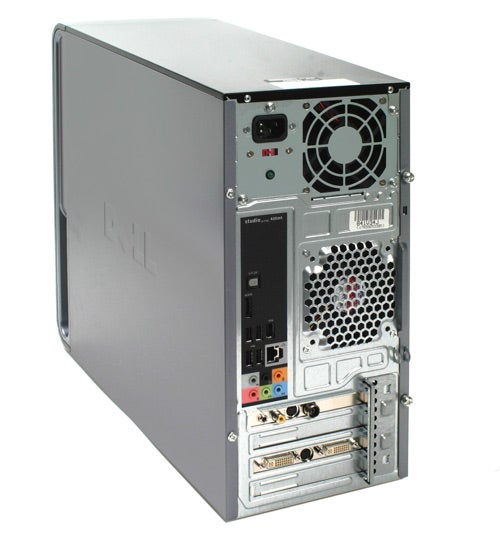 Opening up the case is easily achieved by removing two thumb-screws, but this reveals one of the most crowded cases arrangements you’re likely to see. This impression is caused largely by the twin hard drives, which are vertically mounted with their bottom facing out against the side of the case, in effect forming a wall. The lack of hard drive cage does mean you can install full-length video cards, but there is so little clearance between the top of one of the drives and the top of the video card that you can barely slip a sheet of paper in between.


Cabling could have been a lot tidier, but then this is not the kind of system for those who either mess around inside their computers or like showing off the internals. There’s nothing else too noteworthy inside, apart from a custom Dell CPU cooler tower with its own 92mm fan feeding warm air directly to the case’s fan output.

Unfortunately, Dell has used 1GB DDR3 sticks to achieve the Studio XPS’ total 6GB capacity, meaning all of the motherboard’s memory slots are filled — but at least with this capacity you’re not likely to need to upgrade the RAM anytime soon and the 64-bit edition of Windows Vista Premium installed will be able to take full advantage. 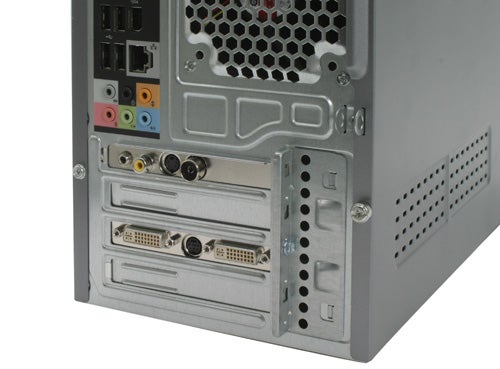 So how does this system actually run? First off it’s worth mentioning an unusual acoustic issue. While the system is generally quiet, it does regularly rev up when under stress. And, though it’s only for brief periods, at these times the Studio XPS gets very noisy indeed. It’s not an issue if you use the PC for everyday computing, but then what’s the point of getting a Core i7? 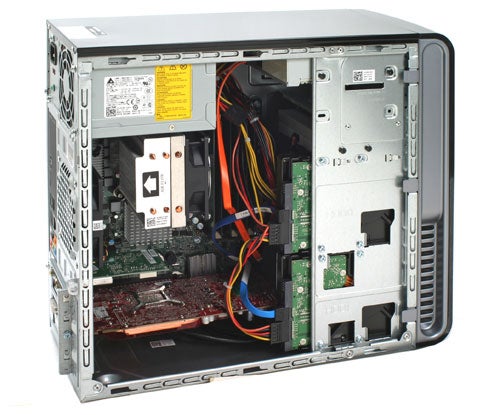 Getting onto performance, the large amount of RAM combines with twin 500GB hard drives in RAID 0 and a Core i7 920 running at 2.67GHz to make for one very fast PC, as demonstrated by how it stomps all over the competition in our PCMark Vantage results — just remember to take the synthetic ‘gaming’ result with a pinch of salt.


Not that Dell’s Studio XPS makes for a bad gaming machine, thanks to the addition of the ATI Radeon HD 4850. It’s just that with this being the best graphics card Dell offers on these systems, it’s not quite up to the power of the rest of the components. This is demonstrated by the way other gaming PCs trounce the Studio XPS in Call of Duty 4 and Crysis, despite featuring older processors. Perhaps the most interesting comparison is with Ultimo Nano, which uses the same graphics card. As you can see in the Call of Duty 4 results, though the Nano only has a Core 2 CPU and 4GB of DDR2 RAM, there is never more than six FPS (frames per second) between the two machines. 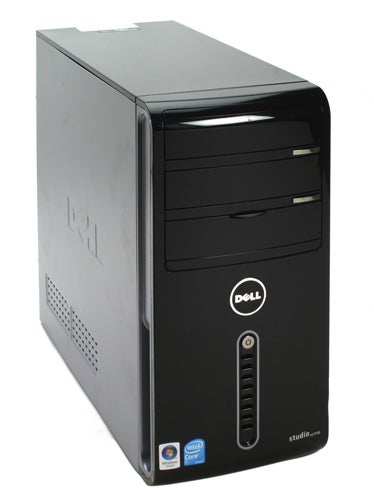 Overall, then, the Dell Studio XPS is a compact and very capable machine, with the intermittent fan noise when under stress as the only real issue. It’s also excellent value for money for a Core i7 machine, especially when you consider all the extras it packs, including Bluetooth 2.0 + EDR, wireless peripherals and an analogue/digital TV tuner, will set you back less than £900. And, as ever with Dell, if you don’t need these options or want a different specification, the Studio XPS range starts from £750, which still gets you a powerful and competent PC. Just keep in mind that as ever with new technology, you do pay a premium for Core i7 over Core 2 and though Dell has made this premium quite small, for many users it still won’t be worth it.


Another win for Dell, its Studio XPS is a stylish, compact, powerful and affordable Core i7 desktop that does everything except play Blu-ray discs — something that can be specified. It even lets you play the latest games with few compromises, though it will occasionally get annoyingly loud when doing so.