If you can afford it, there are few monitors nicer than a high-quality 27-inch IPS display with a 2,560 x 1,440 resolution, such as the ViewSonic VP2770-LED. The problem is that these usually start at over £500, and that’s simply too large a chunk of cold hard cash for many consumers to want to spend on a screen. However, if you’re willing to step down in resolution, 27-inch Full HD monitors – such as the Dell S2740L we have here – can be had for far less.

Starting at around £270, the Dell S2740L is a 27-inch, widescreen, LED-backlit monitor packing a 1,920 x 1,080-pixel IPS panel and multiple connections including an integrated USB hub and audio output. It’s a very stylish affair with an edge-to-edge glass front and faux metal stand – in fact, we would say it’s one of the most attractive ‘budget’ displays we’ve seen. Unfortunately, its classy stand isn’t very adjustable, but as it already provides a decent amount of height, this may not be much of an issue.

What’s missing here is any kind of digital video cable such as HDMI or DVI, both of which the screen supports. However, this is no longer as big a deal as it used to be since most households already have a spare HDMI lead – and if not they’re cheap and cheerful. Dell also doesn’t provide a 3.5mm cable for this monitor’s audio output.

Assembly is usually sublimely easy on Dell displays, and the S2740L is no exception. It arrives in three parts: the screen, the stand and the base. Simply click the stand and base together, tighten a thumb screw, click the monitor in place, and you’re good to go. Unlike with some monitors disassembly is just as easy, thanks to a large button at the screen’s back which lets you click it back out again. For those wishing to mount this screen on a wall or arm-stand, it’s VESA 100mm compatible. 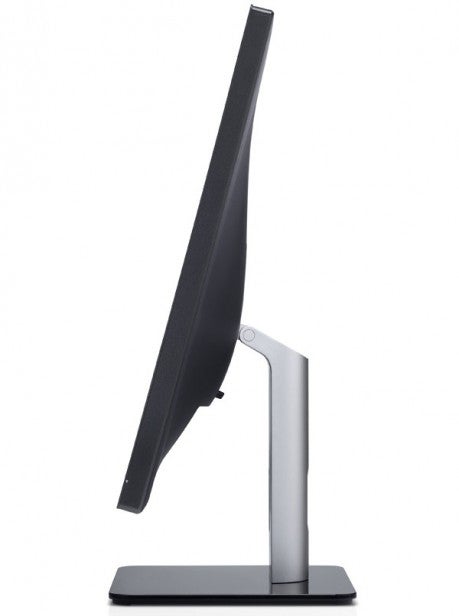 Just in case you didn’t already gather as much from our introduction, the Dell S2740L is a beautiful monitor. Actually, it’s a little depressing that a £270 monitor can look nearly as good as the £770, designer Samsung Series 9 S27B970D.

Just like the S27B970D and indeed Apple’s Cinema Display, the S2740L’s front is a seamless glass whole. This may cause annoying reflections with any kind of ambient lighting present, but it can increase perceived contrast and sure doesn’t hurt a monitor’s visual appeal.

The sides and rear of the Dell S2740L are finished in a matt black plastic that manages to look almost as premium, and which won’t show off fingerprints or dust. The slim, curvy stand is silver plastic textured to resemble anodised aluminium (there’s even a fake hinge imprint to add to the effect) while the base is a glass-like glossy black that perfectly matches the screen’s glass-fronted shiny black bezels.

Build quality throughout is pretty excellent. The plastics used in the Dell S2740L are thick and sturdy, without a hint of creak or unwanted flex anywhere. The stand provides a very stable base for this monitor. 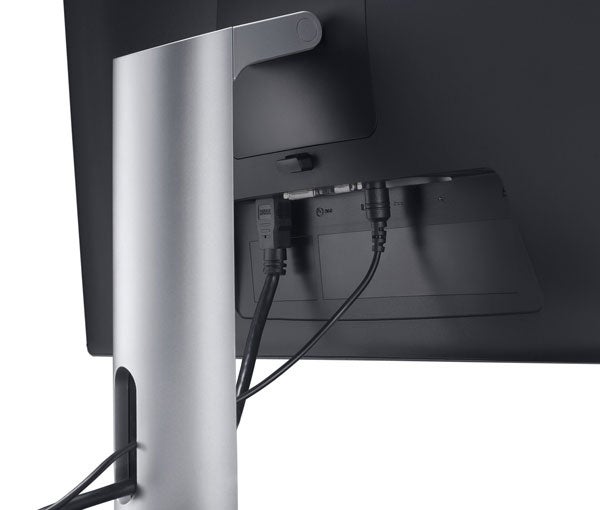 Our first negative with the Dell S2740L concerns its adjustability – or rather lack thereof. There’s no swivel, height adjustment or pivot to be had here. Instead, all you get is tilt. While this is hardly unusual for a budget monitor, we were hoping for a little more from Dell given its past pedigree.

Connectivity is very good. HDMI and DVI are joined by VGA on the video front, while a 3.5mm jack lets you output the HDMI’s audio feed to external speakers. A two-port USB 2.0 hub is an unexpected bonus too. However, it must be said that the down-facing connectors are very difficult to get at, yet another reason why we miss pivot.

Dell doesn’t let the S2740L’s buttons break its clean lines. Instead the controls are touch-based and, despite the lack of feedback, they’re one of the better implementations we’ve come across.

The power ‘button’ uses a classic icon. Above it you’ll find four tiny but distinct dots rather than the icons that so often represent touch controls. The reason this works so well is that the menus are context-sensitive and match up to virtual labels and menus on the screen, meaning you never need to wonder which physical ‘button’ does what.

The top controls provide shortcuts to Presets and Contrast/Brightness by default, but these can be customised to give direct access to Auto Adjust, Input Source, or Aspect Ratio settings instead. It’s so handy to be able to set these shortcuts on more than one button, that it’s definitely a feature we would like to see on every monitor.

Continuing with the good news, in the OSD menus are intuitively laid out and labels are pretty straightforward. However, once you dig down a little it becomes obvious that this monitor is aimed at the ‘regular’ consumer market rather than those after semi-professional image quality.

For example, while there’s a whole raft of presets, only Game mode lets you adjust Hue and/or Saturation. There are no colour temperature settings. There is no sRGB or Image/Photo preset, individual RGB colour control is limited to a single preset, and so on. Mind you, none of these things are deal-breakers if you’re after a monitor for productivity, gaming or movie watching.