Most high-end machines rely on the Core i7-4700MQ CPU, which is the most modest of Intel’s quad-core mobile processors, but Dell goes one better with the i7-4800MQ. It’s got a fearsome specification centred around a 2.7GHz stock speed and a 3.7GHz Turbo peak, and Dell has paired the chip with 16GB of RAM.

The Precision zipped through the Geekbench test to a score of 13,418 – the second-best score we’ve recorded from a laptop, and only beaten by the Apple MacBook Pro 15. The Dell’s PC Mark 7 result of 3,635 is surprisingly mediocre, but it didn’t effect the Dell during our tests: no matter what applications we ran, it was never anything less than lightning-fast. Dell has installed an Nvidia Quadro K3100M GPU into the Precision M6800. It’s a workstation chip that’s based on the older GTX 680 card, but with fewer stream processors and a slower clock speed, so it falls into the middle of Nvidia’s current Quadro range. It’s ISV certified, which means it’s designed to work flawlessly with a bevy of graphical productivity applications.

It’s a very powerful GPU. In the 3D Mark Ice Storm benchmark it scored 82,461, which is one of the best results we’ve seen, and the Dell followed up with 13,879 in the tougher Cloud Gate test, where few machines deliver five-figure results. The Precision’s score of 5,208 in the Fire Strike test is exceptional, and shows that this card is capable of handling demanding graphical workloads – and, if more evidence was needed, the Quadro’s 3D Mark physics results were among the best we’ve seen.

The 750GB hard disk provides more than enough capacity for work projects, but it’s not able to match the pace seen from SSDs: in our sequential read and write tests, the Precision’s platters could only hit 118MB/s and 108MB/s. The 39s boot time is also something of a throwback – systems with SSDs are two or three times as quick. 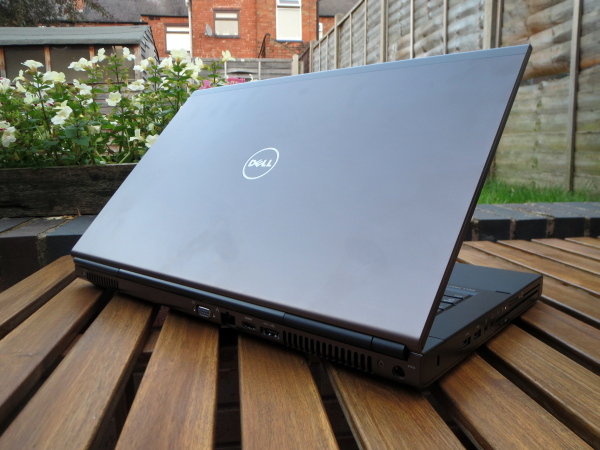 High-end laptops are rarely quiet, but the Precision kept its cool better than most. It’s barely audible when tackling low-intensity tasks, and the internal fans only churned out modest noise when the machine was stress-tested. You’ll hear the Precision in a quiet room, but even a little office bustle will drown out this machine – a great result considering the hardware inside.

Top temperatures of processor and graphics chip were impressively low too, peaking at only 58°C and 63°C respectively. Heat dissipation is handled smartly too: hot air is blown from vents at the back of the system, meaning there’s no chance of burnt laps or hot hands. 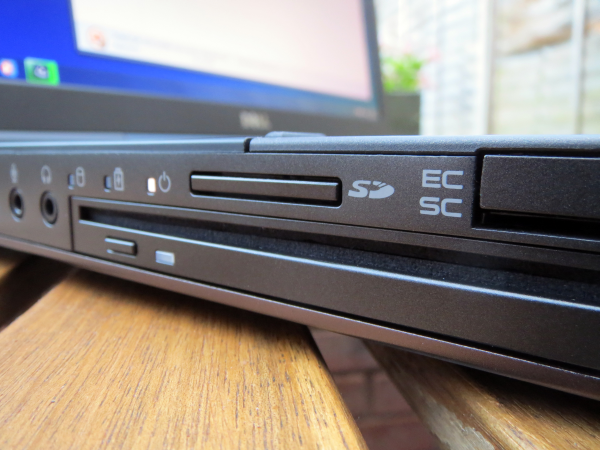 The Precision comes with more battery modes than we’ve ever seen on any laptop. It’s got modes that throttle the main components in order to regulate system temperature, low-latency power modes that are designed to aid audio work, and a quiet mode that calms down the Precision’s fans.

Our standard battery test consists of web browsing and video calling with the screen at 40% brightness. In this mode, the Precision lasted for five hours and 32 minutes. That’s two hours better than the Toshiba and an hour better than the Dell Precision M3800, but it’s still unable to match the mighty ten hour lifespan of the MacBook Pro.

The situation wasn’t as good when we turned the screen to 100%, loaded the Ultra Performance plan and ran a tougher benchmark – the Dell lasted seven minutes shy of just two hours. However you cut it, this machine isn’t lasting a full day away from a plug socket.

An emergency thirty-minute charge saw the Dell regain 27% of its battery. That’s not too good, and it only meant an hour and a half of extra usage.

Used as our main laptop for the review period
Tested for at least a week
Used consistent benchmarks for fair comparisons with other laptops
Reviewed using respected industry benchmarks and real world use
Previous
Dell Precision M6800 Review Next
Keyboard, Trackpad, Specification Options and Verdict Review