Intel may have taken its time to deliver its dual-core Xeon processors to market but they have had a major impact on the server market. This is particularly evident at the entry level as you can now pick up a reasonably powerful system at a very tempting price. Dell’s new PowerEdge SC440 is a prime example as the system on review came equipped with the latest 2.4GHz dual-core Xeon 3060, some good storage prospects and a price tag the right side of four figures.


Dell’s build quality is particularly good as the SC440 is enclosed in a solid steel shell which is the same as that employed by the higher-end PowerEdge SC1430. There’s room at the front for a pair of 5.25in devices and the price includes an IDE DVD-ROM drive. The system doesn’t have any PS/2 ports but does come as standard with the appropriate keyboard and mouse. To access the interior a large lever at the back is pushed forward which pops the side panel out for easy removal. The lever itself can be padlocked shut to protect against wandering fingers. 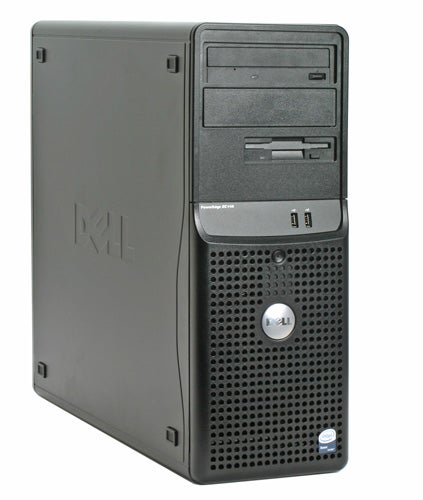 Everything looks neat and tidy inside and it’s clear Dell has been working hard on reducing noise pollution. This is particularly important for small offices as the server is likely to be sitting next to someone’s desk. The processor is positioned plumb in the centre and covered by an enormous sculpted heatsink which is partnered by a 12cm diameter cooling fan. The 3000 Series Xeons are based on Intel’s Core technology so have a reduced power requirement and heat output which enables fans to be set to run slower. Combine all these features together as you have a server that barely whispers.


The motherboard is built around Intel’s 3000 chipset which is aimed squarely at the entry-level server market. It supports single socket systems but can handle Pentium D and Celeron D as well as Intel’s 3000 series processors and Dell currently offers the SC440 with all of these options. It supports four DIMM sockets and up to 8GB of DDR2 memory with the review system equipped with a decent 2GB of 533MHz memory. Storage options are good as the motherboard sports a quartet of SATA interfaces. However, these are unemployed on the review system, which came equipped with Dell’s SAS 5i/R RAID controller occupying the PCI-e 8X expansion slot. 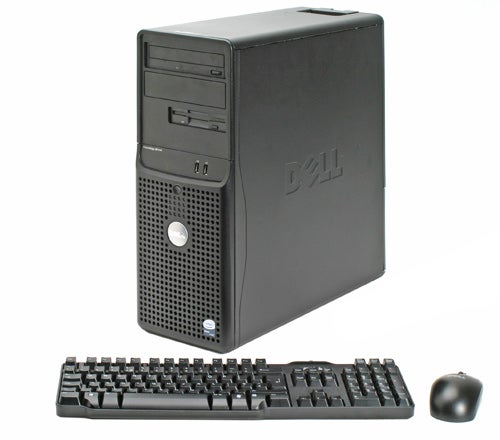 With this in the mix you have a number of options as SAS technology enables you to mix and match SAS and SATA disks on the same controller. For us, Dell opted to go for capacity over performance and supplied a pair of 160GB Seagate Barracuda SATA drives but you can choose from three capacities of higher performance 10K SAS drives instead. Either way, the server is only designed to take two hard disks so your RAID options are limited to stripes or mirrors. The drives themselves are easy enough to access as they are fitted in cold swap carriers in the base of the chassis.

Backup is an important consideration but Dell doesn’t offer anything exciting in the tape drive department. For around £354 you can get an internal DAT72 drive that comes with a SCSI controller thrown in or an IDE Travan 40 drive for an extra £230. The DAT72 drive bundle looks good value although a paltry 3.2MB/sec transfer rate is pedestrian at best. We would recommend avoiding the Travan drive as its 2MB/sec transfer rate is one of the slowest in the industry and whilst the cartridges are extremely sturdy they are amongst the most expensive in terms of cost per Gigabyte. The server has some spare SATA interfaces so you may want to consider Sony’s AIT-1 Turbo drives which don’t cost a lot more and offer much higher backup speeds and storage capacities.

The target market for the SC440 is unlikely to require any remote server management facilities so Dell doesn’t include its full OpenManage software suite. All you get is its Server Assistant which comes supplied on a bootable CD-ROM and provides help with running diagnostics and OS installation. For the latter the Server Setup utility takes you through loading either Windows Server 2003 variants or Red Hat or SUSE Linux. For Windows it’ll provide access to the RAID controller configuration, offer to set up a system partition and then get on with checking the system, loading the required drivers and running an unattended installation. The System Tools option enables you to prepare your hard disks and create a separate partition for storing the system utilities.


Windows tools are also sparse, as although the RAID card is based on an LSI Logic SAS1068 chip you get LSI’s Window’s management utility included from where you can monitor the status of physical and logical drives and view a simple event log.


A well specified entry-level server that is solidly designed and built and is as quiet as a mouse. The price for the review system includes a RAID controller card and a speedy dual-core Xeon processor making it a good choice for small businesses on a tight budget looking for their first server 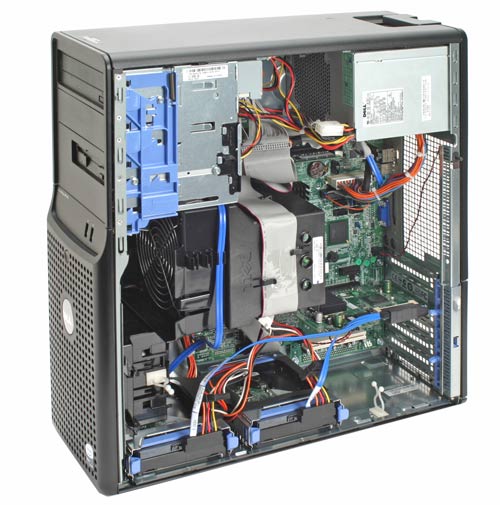 The Server Assistant CD-ROM for the SC440 only provides drivers and a couple of diagnostic utilities.

The Windows diagnostics tool can run a wide range of tests on the server’s hardware components.