Since Dell introduced its print range some years ago, it has continued to sell a good number of both inkjet and laser-based products. In the early days, its ink-jet range was mainly produced by Lexmark, but the Photo 928 is a new all-in-one, manufactured for Dell by Olivetti. It’s a mid-range device offering the usual mix of print, scan and copy, but also with memory card readers.


Styled in light grey, white and black, the device is square cut, but with heavily curved edges. The scanner top cover folds up past the vertical and, unusually, can be completely removed, if you need to scan photos or text from large-format books.


Next to the scanner is a simple, well laid-out control panel, complete with a 61mm colour LCD monitor which can be hinged up from the horizontal. The elegant, nine-button array includes a four-way selection wheel and buttons for start, stop and back. 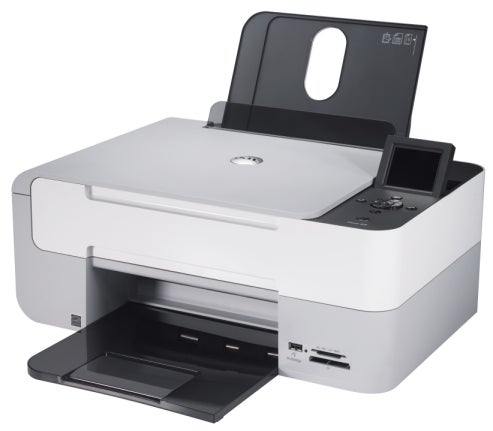 Paper feeds conventionally from a near vertical tray at the rear to a pull-out output tray at the front. There’s a pair of memory card readers at the bottom right of the front panel, which between them can take all the common card types, including MicroDrive, should you still have one knocking about. There’s also a PictBridge socket for direct connection of a camera.


The scanner section of the Photo 928 lifts up onto a blue stay, to give access to the twin ink cartridge carriers. Conveniently, there’s a separate cartridge holder built into the inside of the device to hold an optional photo cartridge, should you want six-colour printing of photos, rather than the standard four-colour. The cartridges auto-align after fitting, and take a good five minutes to do this, but it only happens once per cartridge. 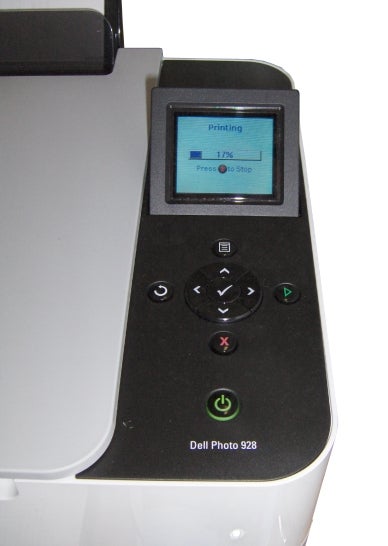 The bundled software includes both OmniPage SE 4 and Corel SnapFire Plus. These two applications between them provide good document handling and photo organisation and simple photo fixes to about the level of Picasa.


When it comes to performance you should completely disregard the quoted speeds of 24ppm for black and colour pages. In normal mode, which most people will use most of the time, we measured black text print at 3ppm, colour text and graphics at 1.8ppm and a colour copy at 1.28ppm, making the Photo 928 one of the slowest inkjets we’ve tested. Part of this is due to long preparation time before starting a print job – anything up to 40 seconds – but the print head doesn’t have a long swathe either, so it has to make more passes per page.

As if to try and make up for the slow print speed, paper feed is really quick, which has two side effects. Firstly, it’s noisy; a high-pitched whiz of gears, which we measured at over 60dBA. Secondly, if a page isn’t completely full of text, it can eject far enough off the output tray, which has no end-stop, that the top edge of the next sheet catches it and pushes the first sheet unceremoniously onto the floor. This happened several times during testing.


A slow print speed can be mitigated if the prints that come out are of very good quality. The Photo 928 produces only fair quality text prints, not as good as several other all-in-ones in this price bracket. There’s some ink spray around small characters, while at the same time paper fibres show through in places, too. Text printed over coloured backgrounds feathers visibly, producing a fuzzy print.


Photo prints are much better, with a good level of detail in the foreground and in areas of shadow. Colours are natural and smoothly varying sky textures are dithered no worse than with rival machines. 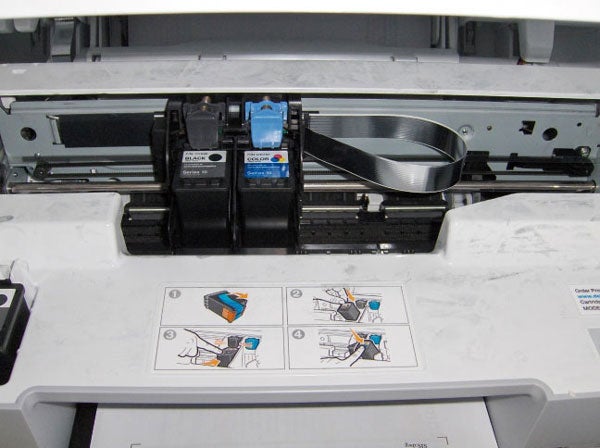 There are two ink cartridges in the Photo 928, one black and the other tri-colour, and both of these are available in standard and high-capacity versions. Dell quotes page yields using methodology from a testing lab called QualityLogic, which its web site claims to be the same as ISO testing. We ran tests on black and colour cartridges using the ISO test set and produced figures of 309 pages for the black cartridge and 208 pages for colour. This compares to quoted figures of 450 black and 350 colour.


Since our measured consumptions were much lower than the claims, particularly for the colour cartridge, we used our figures and Dell’s prices of £14.10 and £15.75 for the consumables. This gives a cost per black page of 5.4p, with 12.9p for colour. Both these figures are high, in comparison with other machines in the same class.


Dell’s Photo 928 is a well-made all-in-one, which is easy to set up and use. It has several shortcomings though, in comparison with its main competitors. Its print quality is only fair and it takes a long time to produce pages. The cost per page, if you stick to true ISO measurements, appears quite a lot lower than the quoted figures, giving comparatively high running costs.