Pegged as a netbook “designed for education” (despite also being available for businesses), we’ve been waiting to get our hands on Dell’s Latitude 2100 for quite some time – not because we want to go back to school, but because in the relatively boring world of netbooks, the 2100 offers a breath of fresh air.


Okay, maybe it’s more like a whiff than a breath, as inside its chassis you’ll find the same Atom N270 1.6GHz processor, 1GB of RAM and 160GB hard drive as 90 per cent of other netbooks currently available. But this is definitely more than ‘just another netbook’.


To achieve “student-rugged” status, Dell has coated its educational machine in a hardwearing rubber finish top and bottom, leaving the sides in textured matte black plastic. This not only feels great, but provides a solid grip and also cushions the machine against bumps, scrapes and impacts. Even the battery, which is released with a huge soft-touch switch, has its own coat of rubber. 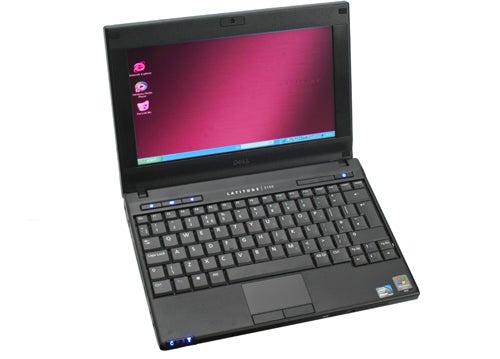 Just because it’s aimed at the educational and business market doesn’t mean it’s too boring either, as in addition to the default Chalkboard Black the 2100 can be had in a range of colours including Blue Ribbon, Ballfield Green, Schoolhouse Red and Schoolbus Gold for £16 extra (keep in mind though that since this is an educational/business product all upgrade prices are exclusive of VAT).


If opting for the six-cell rather than three-cell battery – and at only £16 extra you’d be nuts not to, unless you’re buying in large quantities – the Latitude 2100 is also easily the fattest netbook we’ve encountered. At 35mm the machine itself isn’t exactly slim, but the six-cell battery lifts it up another 20mm at the back, angling the keyboard. 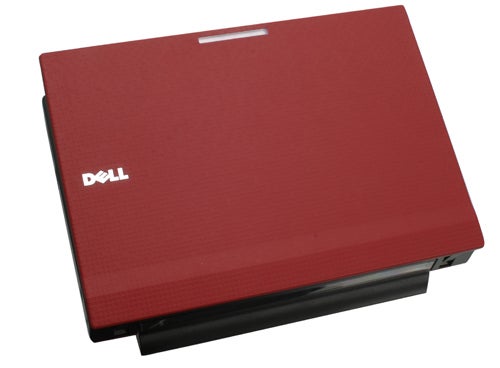 Because of the larger battery’s unusual shape you’re going to have a hard time fitting this into many bags’ standard laptop/netbook compartments. However, to either side of the hinge are two slots for another of the Latitude 2100’s unique education-targeted features: they allow you to attach a shoulder carrying strap, so a bag may not be necessary. Unfortunately this strap wasn’t included with our review sample, so we can’t comment on its comfort or usability.

As you would hope for a machine that’s designed to withstand a lot of rough handling, build quality throughout is excellent – in fact this is the most durable netbook we’ve come across bar perhaps HP’s Mini Notes, the business models of which have retained that amazing brushed-metal chassis despite upgraded internals.

As far as design goes, rather than looking like a children’s toy we’d call the 2100 industrial. This rugged, serious impression is enforced by its strong, aggressive lines and uniform, matte black insides with the blue-backlit power button and indicator icons.


The matte bezel surrounding the screen contains the optional webcam as well as surprisingly impressive (by netbook standards) speakers. Though inevitably on the tinny side when it comes to bass, the mid range is generally clear and they manage relatively high volume levels without significant distortion.

The 10.1in screen is yet another area where the Latitude 2100 stands out from the crowd. Admittedly, with HD screen options from almost every major netbook manufacturer including Acer, HP and of course Dell itself, the resolution of 1,024 x 576 is uninspiring to say the least and can’t be upgraded. However, for £12 (£20 including the webcam) you can opt for a resistive touch-screen, making the 2100 one of the very few non-tablet netbooks with touch-based inputs.


In our testing we found the screen’s touch functionality to be very sensitive and accurate once it was calibrated with the included application. By default the touch-display was an inaccurate mess, which isn’t ideal on a product where many of its potential users might not even realise that they need to go through a calibration process. After calibration it was easy to control and navigate Windows XP without resorting to the touchpad.

For an extra £25 you can get Vista Basic rather than XP, but our advice would be to always avoid Vista on a netbook. It’s also worth noting that you can save £24 by going for Ubuntu Linux, but only on the Education rather than Business model. Finally on the software front one can choose between Microsoft Office 2007 Basic, Small Business or Pro, but with prices starting at £99 it’s cheaper to buy the suites yourself (though you will need an external optical drive to install them).

Aside from its touch abilities, the screen performs fairly well. We’ve yet to come across a good netbook display but this is one of the better examples we’ve seen, thanks partially to the semi-matte finish. This mostly prevents distracting reflections and allows better viewing angles, though it also means colours come across with a little less verve than on glossy screens.


Barring the usual greyscale weaknesses (leading to detail loss in particularly bright or dark areas) there’s little else to complain about, with level backlighting and sharp text. It’s also worth mentioning that the integrated Intel GMA950 graphics will let you set the resolution up to 1,920 x 1,080, assuming you have a high definition display to hook it up to. 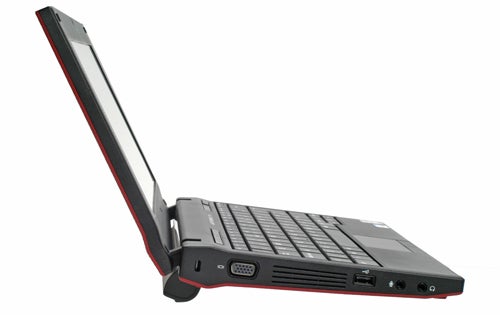 As far as the keyboard goes, rather than the flat-style keys of its consumer Mini-series, Dell has gone for a more traditional tapered key shape. While this is a bit of a step back, it’s still perfectly usable (coming from someone who found the original Eee PC impossible to type on) with a logical layout and positive feedback.


While not matching up to the large multi-touch affairs found on the likes of Asus’ Eee PC Seashell, the 2100’s touchpad is perfectly serviceable. It has a matte, smooth surface which differentiates it well from the textured matte palm-rests, and its two separate buttons offer excellent feedback. 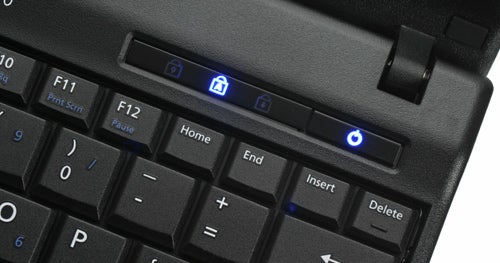 Connectivity, meanwhile, is pretty much standard for a netbook. On the right are VGA and USB connections, and headphone plus microphone jacks. The memory card reader is located at the front, while to the right we find power and Ethernet connections joined by a further two USB ports.

Inside the chassis, the usual Intel Atom N270 will happily cope with most everyday tasks, but starts to throw tantrums if you try intensive multitasking or most HD video, which the Intel GMA950 graphics certainly can’t cope with.


The 1GB of memory (upgradeable to two) is the default for the standard Business configuration, though on the Education model you can also select 512MB – just about enough to satisfy XP and run Ubuntu without a problem.


Hard drive options also vary somewhat between models, as the Business Latitude 2100 comes with a 5,400rpm 160GB hard drive as standard, while the Education model lets you pick an 80GB HDD for £8 less, or ‘upgrade’ to a 16GB solid state drive for an extra £4. It’s a shame the solid state option is not available on the business machine, as there are plenty of business users who would value a shock-proof data configuration over the extra space. 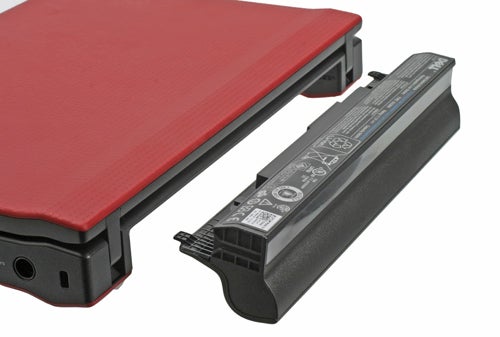 On the education-version of the 2100 neither Bluetooth nor Draft-N Wi-Fi come as standard, but on the business machine we get Bluetooth by default with Draft-N a £7 upgrade over the b/g card installed. We do wish Dell had included a physical wireless switch though, especially considering this machine’s target audience.


Another area where Dell’s Latitude 2100 impresses, is in battery life. With the six-cell 56Whr (11.1V) battery, running a standard definition video at 50 per cent screen brightness and with wireless turned on, this netbook put in a not inconsiderable five hours and forty minutes and with less intensive usage comfortably exceeds the six hour mark. 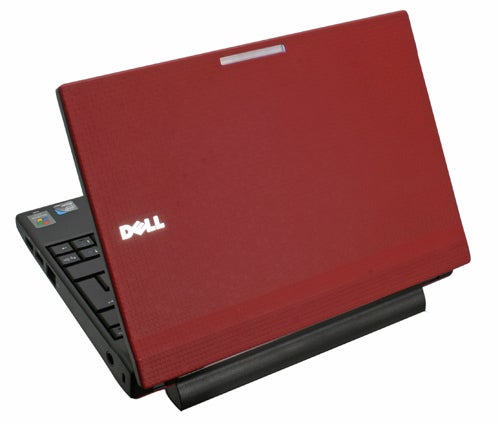 However, this rugged machine’s features come at a price, both in terms of money and weight. Starting at 1.36kg for the lightest 2100, our six-cell sample came in at a staggering 1.59kg, making it the heaviest 10.1in netbook we’ve reviewed. It’s also anything but cheap, with a machine configured as our review model demanding £368 excluding VAT or delivery for businesses and £419 for school-goers (though doubtlessly Dell offers bulk discounts for educational institutions).

This means that as a consumer, you’ll need to part with at least £430 to get your hands on this heavy netbook, and only you can decide whether the ruggedness and unique features like a touch-screen are worth it, especially since Dell’s own (admittedly non-rugged) Mini 10 can be had with a 1,366 x 768 10.1in screen for under £400 and Toshiba’s excellent NB200 can be found for as little as £320.


A rugged netbook with a few unique options like a touch-screen, Dell’s Latitude 2100 is certainly appealing to its target market of students and road-warriors, but since you pay quite a bit for the privilege most consumers will probably be better off looking elsewhere.