There was a time not all that long ago when the idea of a Dell product, whether it be a server, desktop or notebook, shipping with an AMD processor was simply laughable. So synonymous was it with Intel, with the highly visible Dell advertisements all featuring the infamous Intel chime, that the average consumer could be forgiven for thinking Intel and Dell to be one of the same. Yet, despite many years of ignoring the better performing AMD alternatives, Dell made the surprise decision in May last year to start using AMD technology in its machines for the first time.


That this move came rather late in the day is a severe understatement, especially since by now Intel has usurped AMD in the performance stakes with its excellent Core 2 Duo range. Nevertheless, starting with servers using AMD Opteron processors, Dell has been slowly introducing further AMD powered desktops and now, with this Latitude 131L, its brought them to notebooks for the first time too. 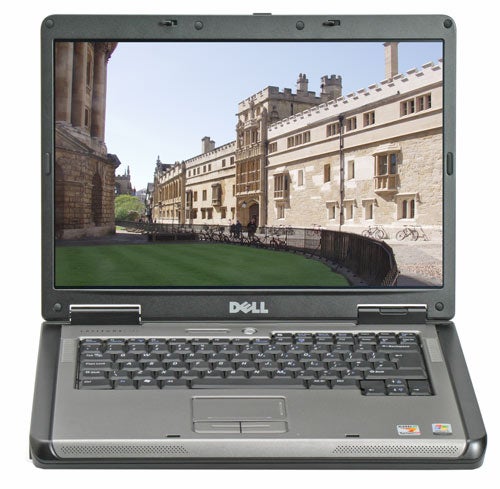 For the most part Dell has used AMD chips in its lower range affordable solutions and this is still the case with the Latitude 131L. Targeted at the ever lucrative business market, the 131L is a no frills notebook that’s perfect for all those tedious office applications we all love to hate but simply can’t do without.


Coming in at a not unreasonable £586 (inc. VAT) our review model came with a Turion 64 X2 TL-50 running at 1.6GHz, an 80GB SATA hard drive, DVD Rewriter and 512 MB RAM. Naturally, the 131L also has wireless networking built in and though there’s no Bluetooth this could be added via any number of external units should it be required. To top things off it retains a 56k modem for all those golden oldies, and those backward locations where wireless connections are few and far between.

All in all, this spec should prove more than sufficient for the great majority of office workers, and our tests revealed solid performance and decent battery life. It also compares favorably with competing units providing plenty of bang for your business buck. It’s also worth noting that, from what we’ve been able to establish, the Dell website only allows a memory configuration of 1GB or more, though this is really ideal with Vista looming large on the horizon.


Since this is a business orientated notebook it’ll come as little surprise that the 131L is no great looker. That said it’s by no means ugly, sporting a two tone black and darkish grey matte finish that shouldn’t offend anyone and Dell has made an effort to square some of the rough edges seen in previous business notebooks. 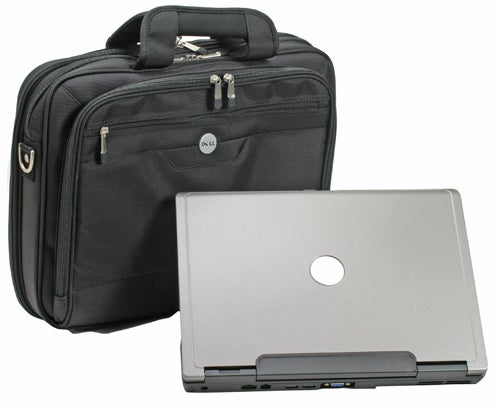 It’s slightly bulky, and at 2.8 kg is by no means light, but what it lacks in finesse it makes up for in a sturdy feel that could probably survive minor bumps and scraps without too many problems. Pleasingly, hard drive impact protection is also included as standard along with a standard notebook carry bag and together they should prevent fatal damage occurring on those busy and forever crowded commuter trains, should you wish to actually lug it around with you.

With its primary functions likely to be typing and general office work it’s important to have a decent keyboard, and in this the 131L doesn’t disappoint. The widescreen aspect of the screen allows for wide dimensions, increasing the amount of space for the keyboard and allowing for a generously sized shift key – the one key that often suffers on cramped keyboards. Similarly, the return and backspace keys are all of a decent size and it shouldn’t take too long to get a good typing speed up.


Importantly though, the keyboard in general is pleasingly proportioned and the keys have a decent depth to them. They also feel sturdy enough for those like me who tend to pound the keyboard a little harder than necessary. My only slight complaint, and it is only minor, is how the Caps Lock key juts a little farther out than corresponding keys, making it susceptible to accidental presses. This accepted, it’s still a very decent keyboard, and you’ll soon learn to avoid that caps key. 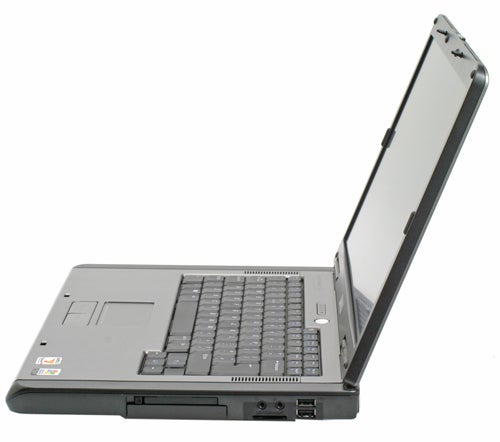 The keyboard is complimented by a perfectly serviceable widescreen aspect track pad, and though I’d prefer to have a rather more defined clicking mechanism for the buttons, as opposed the springy variety provided. It’s of little significance though when you can use the track pad for most operations.


The 15.4 inch widescreen display, with a native resolution of 1,280 x 800, is a solid performer too and lacks the glossy reflective finishes that are inappropriate for office environments. This means you’ll rarely have problems with reflections from overhead lights, or any other light sources for that matter. Since this is a widescreen display the 131L is also quite handy for watching movies, which is great for those tedious long haul flights and budget airlines.

In general use the screen enables you to view two pages in Word on 70 per cent zoom, or you can run a sidebar program like Google Desktop or a messenger program alongside your normal documents. At this price point, and for this market, you couldn’t ask for much more from a notebook display and though the viewing angles aren’t amazing it’s not of great concern in office environments. Moreover, this might prove beneficial if you dislike people looking over you’re shoulder on the train or in the office.


Connections wise the 131L is by no means overloaded with the bare minimum on offer. On the left there are no connections, with just the optical drive, security lock and a small air vent to be found. On the right are an ExpressCard slot, headphone and mic jacks, memory card slot (SD, SDIO and MMC supported) and two USB slots; whilst on the back you’ll find the AC port, 10/100 Ethernet port, modem socket, two further USB ports and a VGA D-Sub port for connecting an external monitor. Sparse this may be, but this is all you’re ever likely to need for business use.


Overall the Latitude 131L is a solid performer. Business notebooks are never going to be the most exciting of things and this is no exception, but it does what it’s supposed to do with aplomb and offers plenty of value for money.