First up on the performance front is how this tablet handles when trying to live up to its Rugged name, and the answer is pretty well. The Latitude 12 Rugged survived being kicked about a muddy and wet back yard followed by a long rinse under a cold tap.

It took a bit of work to get all the mud out of the various grilles and seams but once rinsed off and patted down it was able to run a PCMark test without breaking a sweat… well, it probably did help it dry off further. Just remember, this isn’t a fully waterprood device so it won’t survive being dunked under water.

Otherwise, this is a basic tablet and as such its performance is pretty basic too. In the Cinebench R15 CPU test its score of 149 is in line with other models using Intel’s power-sipping M-5Yxx processors, such as the HP Elite X2 and Asus UX 305. However, that’s about half what more typical ultrabook laptops will get you.

The upshot is that any sort of intensive work will be very slow on this machine. Clearly such a machine is not meant for gaming, editing video or the like but even just having half a dozen tabs open on your web browser will push it. This is a device meant for simple desktop tasks and running basic data entry apps. It’ll of course play video and allow you to browse GoogleMaps, and that sort of thing, but push it much further and it’ll struggle.

The flipside to such a modest level of performance is massive battery life. Despite the two batteries only being 26Wh each they combine to last a whopping 12 hours and 36 minutes. That’s among the longest lasting laptops or tablets I’ve ever tested. Admittedly brightness was a touch lower than I normally test (100nits compared to 150-200nits) but real world usage should still be well in excess of 10 hours.

Plus of course you can swap out the batteries separately and still keep on working, so assuming you’ve got a charger relatively close by, battery life is essentially infinite. 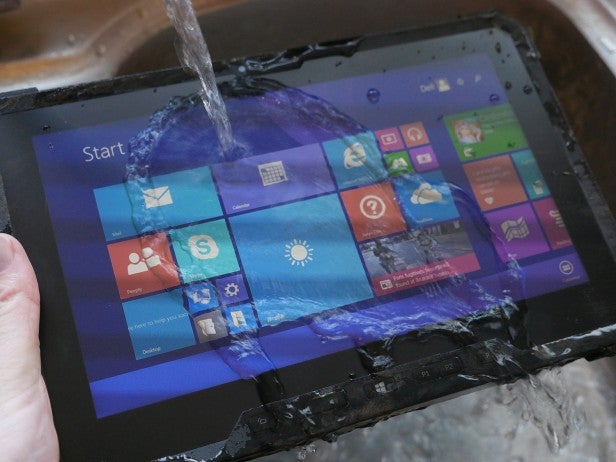 As mentioned, Windows 8 is still not exactly the slickest touchscreen operating system but for the sort of data entry tasks it’ll be used for, Windows is the defacto standard.

I’d recommend upgrading to Windows 10, though, as it has several improvements to the way touch input is handled, even if the overall look and feel doesn’t seem that different from Windows 8.

Otherwise there’s very little added software here. There’s the obligatory free trial of McAfee anti-virus and various Dell support utilities but otherwise it’s a fairly clean install ready for you to load up with the software you need. 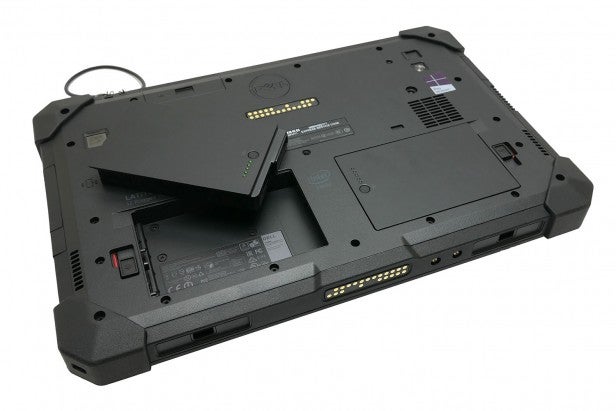 Should I buy the Dell Latitude 12 Rugged?

The Latitude 12 Rugged gets a lot of things right in terms of providing a tough, easy to use tablet for use out in the field. Its sturdily built, offers good dust and water protection and has the screen, processor and touchscreen performance required for the sort of use it will get.

As such, at around £1369 (no GPS) or £1469 (GPS) it offers reasonable value compared to the competition, such as the Panasonic ToughPad TZ-G1. That model offers a higher resolution screen, inbuilt 4G and slightly better port protection but lacks the dual-batteries and costs over £2000. Plus we’re yet to review it.

Which is more suitable for you will depend on your needs but certainly the Dell offers reasonable value considering the toughness you are getting.

The Dell Latitude 12 Rugged is a highly specialised work tool that doesn’t come cheap. However it does undercut Panasonic’s Toughpad by a decent margin and still offers a good overall user experience with excellent rugged credentials.