What is the Dell Latitude 12 Rugged tablet?

The Dell Latitude 12 Rugged tablet is designed for use in environments where regular rain and muck are the order of the day. Whether it’s your parcel delivery man asking for a signature in the English drizzle or an oil worker inputting data out on a wind and sea swept rig, this is the sort of device that’s meant to shrug it all off.

As well as IP65 rating for dust and water resistance you’ve got a chunky, rubber-cornered chassis, dual-batteries for on the fly swapping, plus a touchscreen that works in the wet and when wearing gloves.

It’s not everyday an individual would look to buy such a specialist bit of kit but if you work if you in a messy environment, such building sites or farming then it’s the sort of thing you may want to think about investing in for field use.

That’s the sort of spec that is adequate for the basic data entry and retrieval tasks such a device will be used for but not much else. Instead, it’s everything else about The Latitude 12 Rugged that makes it special. 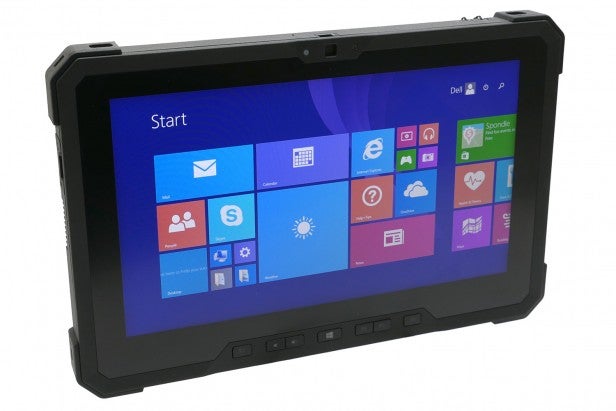 Encasing that screen and internal components is a chunky, water, dust and knock resistant chassis. Weighing in at 1.62kg and with dimensions of 312 x 203 x 24 mm, it’s quite the beast.

The screen has a tough plastic cover as well as a rubber covered bezel, while the corners are also protected by thick rubber pieces. The rest of the chassis is otherwise built from tough plastic that can take a good bashing without denting, scratching or more importantly cracking or breaking.

All the external ports are covered by thick rubber flaps that keep most water and dust out, though notably they aren’t latched in any way so aren’t as secure as some other tough tech

What’s more the CPU is cooled by a fan, the inlet for which is exposed to the elements. As such, Dell is relying on HZO liquid protection technology to prevent any water that does get into the system from damaging any components.

That’s all well and good but if you drop this thing in a puddle or it is regularly exposed to sea water, there’s a chance the fan/heatsink and other ports will simply get clogged up.

Taking a closer look at those ports, on the right edge you’ve got a USB 3.0 and mini VGA port under one flap and the power socket under another. Then on the left edge is one flap under which are headphone, microSD and miniHDMI ports. 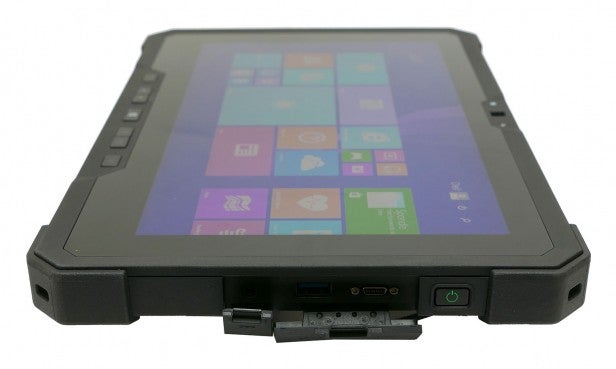 On the top edge is a slider that can be used to cover the webcam, while round the rest of the sides are various lanyard loops and other holes for the various straps that can optionally be bought.

Included extras are a rear camera with flash, a fingerprint reader, those dual-batteries and a passive stylus. There’s also a little plastic emergency card that has a ruler and measurement converter on one side and some survival tips on the other. It’s a bit random but could be useful if you’re really out on a limb. 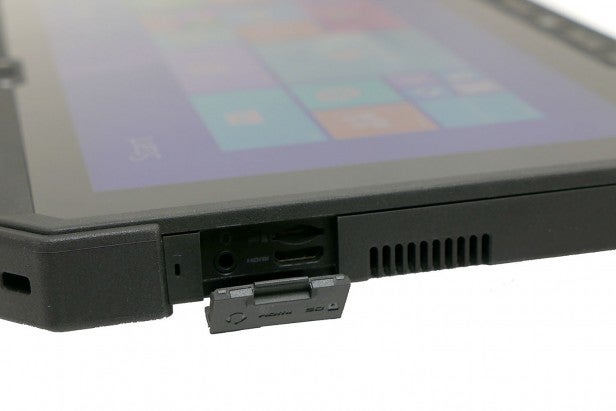 Finishing things off on the features front are the buttons. As well as an illuminated side power button, there are seven buttons on the front, which sadly aren’t backlit. Centre is the Windows start button, then there are volume controls, a screen rotation lock button and three programmable buttons.

It might’ve been good to see a dedicated brightness control given the varied environments such a device is likely to be used in, though it might be possible to program the other buttons to do this.

Next
Screen, Stylus and Camera Review