We recently looked at the Dell Inspiron M101z, an 11.6-inch ultra-portable that impressed us greatly. Today we’re looking at its slightly larger, but similarly specified, 13.3-inch cousin, the M301z.

Like the M101z, the M301z uses low-voltage, AMD processors. In the case of our M301z, it uses a slightly faster 1.5GHz dual-core processor than the 1.3GHz one of the M101z, but it shares the same ATI Mobility Radeon HD 4225 graphics core and also has 4GB of RAM. There’s a 7,200rpm, 500GB hard drive on-board for storage, but there’s still no integrated optical drive. Moreover, unlike the similarly priced HP Pavilion dm3, an external one isn’t provided in the box.


Other features include 802.11n Wi-Fi, the fastest kind currently available, and Bluetooth 2.1. You only get 10/100Mb Ethernet, though, which some may find restricting. Naturally there’s a webcam, too, a 1.3-megapixel one, and the 13.3-inch display sports the usual 1,366 x 768 native resolution. 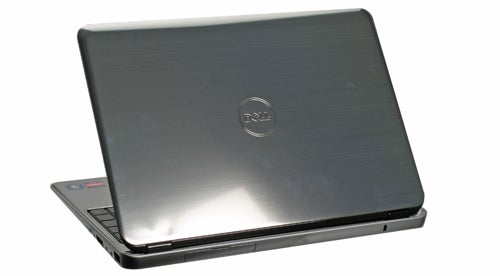 While the M101z is related in concept, the M301z has a slightly different design. Its lid and palm-rest share the faux-silver metal effect and to good effect, adding an air of class that belies the affordable pricing; but this is further enhanced by the silver base, and the battery which is mounted at the front (MacBook-style), rather than protruding awkwardly from the back. This does preclude using high-capacity ‘extended’ batteries, though, which could prove problematic.


Whatever the practical trade-offs, the M301z is a very smart looking machine. Due to its size it’s arguably easier to work on than the M101z, too, particularly thanks to its enlarged touchpad and screen. It’s slightly less portable as a result, but at 1.79kg it’s far from bulky and the 13-inch form-factor has always proved portable enough for most people. 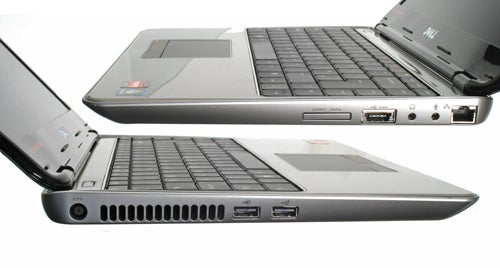 Connectivity is varied, differing slightly from the norm. There are three USB ports, one of which doubles as eSATA, as well as a memory card reader and two audio jacks. Where the M301z deviates is in its video connections, with VGA ejected in favour of a mini-DisplayPort output alongside an HDMI port.

These are discreetly hidden behind a flap at the rear, an arrangement convenient for ‘docking’ with an external monitor when at home. We’re not sure DisplayPort is the best choice for a machine of this type, though, particularly as those with a VGA only monitor will have to purchase a £15 adapter.

In general the build quality of the M301z is good, with no poorly fitting panels and a typically premium feel. It’s doesn’t feel quite as sturdy as the M101z, however, mainly because some of the panels flex significantly when put under strong pressure. Neither is the M301z the quietest machine, its fan often spinning up even when sat idle. 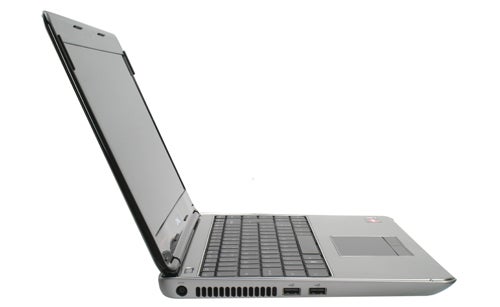 One of our favourite aspects of the M101z was its outstanding keyboard. Though the M301z doesn’t quite match it, its keyboard is still very good. The layout is sensible and logical, and the keys have a decent amount of travel and precise actions. 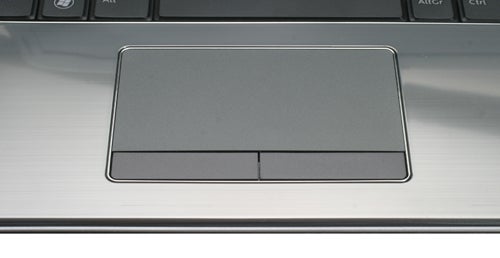 Equally impressive is the touchpad, which is very large for a machine of this size but is perfectly positioned for typing comfort. Multi-touch support is a given, and includes two-finger scrolling for easier navigation of long documents and web pages. The two buttons offer well-defined, firm feedback.


Aside from being larger, the display on the M301z is much the same as on its smaller cousin. The 1,366 x 768 native resolution is about right for this size screen, providing ample desktop real-estate while remaining readable. In all other respects it’s a solid, but unspectacular, display. Colours are rich enough, blacks deep enough, but viewing angles are a shade on the narrow side. 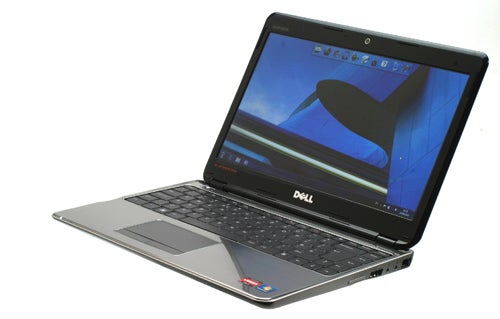 We assume the M301z uses the same speakers as the M101z too, though in a larger machine they don’t sound quite as impressive. Nonetheless, though their maximum volume is merely average, we’ve heard much worse from other small portable laptops, and they produce clarity sufficient for occasional use.

As the above shows, the faster processor in the Dell means it outperforms the HP Pavilion dm3 – another AMD-based machine – by a reasonable margin and matches the Intel-based Asus UL30A. In general use it’s a snappy machine that copes comfortably with normal computing tasks, such as productivity, music and video playback, and web browsing. Image editing isn’t too arduous either, and the system plays all kinds of HD video smoothly.

It also enjoys a significant advantage in games, producing a playable 28.7fps in our TrackMania Nations test. This means it’s powerful enough to do a little very casual gaming, which is more than can be said of most low-voltage ultra-portables around – not to mention any laptop using Intel’s HD graphics.

Where the M301z does stumble, however, is battery life. While its 259 minutes (2hrs, 19mins) result in the Productivity test is passable, it’s but a fraction of competing machines like the Asus UL30A. Moreover, it’s even less than the likes of the Samsung Q330 – a similarly priced 13.3-inch laptop, but one that uses a full-power Intel processor and has an integrated optical drive.


This final point rather undermines the M301z. Though the Samsung Q330, and the more expensive HP Pavilion dm4, aren’t quite as portable, as tools they’re far more flexible and offer better performance for the money. Sacrificing performance only works if you get the battery life of the Asus UL30A, or the ultimately portability of an M101z or the Acer Aspire Timeline 1810TZ. It’s still a solid, attractive machine, but the M301z falls awkwardly between these stools.


It has the looks, and it’s great to use, but the M301z isn’t quite the marvel its smaller cousin is. If you care little for performance it’s a very nice, portable machine, but it compromises a little too much performance and features for our liking.