Not to be confused with netbooks, 11.6-inch laptops offer up a tantalising balance between performance, portability and affordability. They are, in effect, the perfect upgrade from a netbook, and the best alternative for those who understandably feel a netbook doesn’t meet their needs. An excellent example of the breed is the Acer Aspire Timeline 1810TZ, but the recently released Dell Inspiron M101z offers up stiff competition.


Where design is concerned, the Inspiron M101z definitely has the edge. Its basic design is very smart, as the dark grey body and black screen bezel complement each other nicely. Added to this are Dell’s colourful options, which include the ‘Lotus Pink’ version we have and blue and red options. Fortunately only the pink version has the floral pattern to its lid and body, though at £19 extra over the standard black livery the coloured options are far from essential.


Another important difference between the Dell and Acer’s offering is the use of one of AMD’s Athlon II Neo processors, which were used to good effect in both the Acer Ferrari One and the HP Pavilion dm3. In the M101z you get the K325 chip, which has two cores running at 1.3GHz and with 1MB cache to share between them. Graphics are supplied by an integrated ATI Mobility Radeon HD4225, and there’s 4GB of RAM and a fast 7,200rpm, 320GB hard drive in support.

Though our model came with Bluetooth 2.1, according to Dell’s UK website new models are now shipping with Bluetooth 3.0. This is a nice bonus, and 802.11n Wi-Fi is included as well. You only get 10/100 Fast Ethernet for wired networking, but this isn’t the kind of machine that will spend much time tethered to a wall socket.


There are two reasons for this: one is its size, as the M101z measures just 292mm across and weighs 1.56kg; the other is the presence of a six-cell, 56 Watt-hour battery that when combined with the low-voltage processor ought to ensure good battery life. Also aiding portability is the relatively small and light power supply, which weighs just over 300g including the socket and cables. All-in-all, carrying the M101z around shouldn’t prove too great a burden. 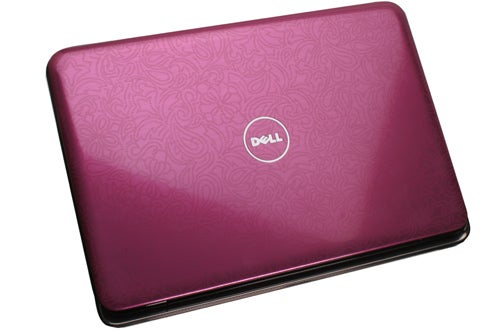 Also encouraging is the excellent build quality. All the plastics used in its chassis are of an excellent quality, and there’s a general sense of sturdiness to panel fittings and the action on the hinge. Like the aesthetic design, the M101z definitely has an edge over the Acer in this department, particularly as Acer has a patchy reputation where build quality is concerned.


For those with one eye on the future, Dell’s warranty offering is also extremely attractive. Unlike many competitors, Acer included, Dell’s warranty is collect and return (as opposed to Carry-in, where you’re responsible for sending your product for repair) as standard, and upgrades to the standard one year package cost just £19 and £29 for two and three years respectively. It seems a trivial issue at point of purchase, but you’ll appreciate it further down the line.

On small laptops connectivity is generally fairly limited. This is no less true of the M101z, but it has all the things you really need. This includes HDMI and VGA (on the back for easy connection of a monitor) video outputs, three USB ports, two audio jacks (1x headphone, 1x microphone), and a memory card reader. Above the display is a 1.3-megapixel webcam with integrated microphone, and one of the USB ports supports standby power charging – a useful feature for charging your mobile phone.

Of course, as with all machines this size, there’s also no optical drive, and should you need one an external one is sold separately. This could prove troublesome for some users, but we’ve yet to see a similar laptop that does have one and the M101z is unlikely to be your only PC and isn’t best suited to such a role.


So the lack of an optical drive is a limitation, but we admit to becoming unreasonably giddy upon typing on the M101z. The keyboard is, without doubt, the best we’ve used on a laptop of this size and price. Not only is the layout perfection incarnate, the key actions have a sense of definition and solidity that renders typing effortless. They make a mockery of the woollen keys on the far more expensive Toshiba Portege R700, for example.

By contrast the touchpad and its buttons are merely adequate. We actually found the buttons a little imprecise, but they work perfectly well and the touchpad is positioned and proportioned as to avoid contact when tying. Multi-touch support is limited to two-finger scrolling, but this is arguably the most useful action anyway – anything more complex wouldn’t work well on such a small area.


Just as impressive as the keyboard is the M101z’s audio-visual performance. Starting with screen, its basic statistics are as you’d expect: 11.6-inches, LED backlit, and with a 1,366 x 768 native resolution. Regrettably it does have a glossy, reflective finish, but in every other aspect it’s an outstanding display. Its high-resolution and small size makes it extremely sharp, and it produced greater fine detail in videos and photos than most laptops its price and size. Even the viewing angles aren’t dreadful, not that the screen’s size lends itself well to multiple viewers anyway. 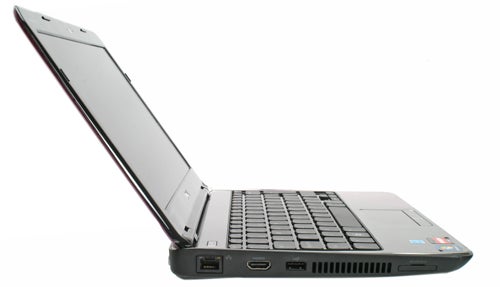 The speakers, meanwhile, are little gems. Though they obviously lack low-end punch, boosted by SRS processing they deliver admirable clarity at high-volumes. This applies equally for music and video, and even without the extra processing these speakers are a cut above netbooks and many cheap desktop replacement laptops.


To surmise, between the outstanding keyboard and way above average screen and speakers, the M101z is a pleasure to use. It also benefits from a few nice usability tweaks, such as the top-row of Function keys defaulting to their shortcut actions. This gives you instant access to brightness, wireless and playback controls, which is a useful time saver.

It’s always interesting to see how Intel and AMD processors compare, and on this evidence the difference in processing power isn’t significant. Both the Dell and the Acer perform to a similar level, as does another AMD-based low-voltage system, the HP Pavilion dm3. We’d wager Intel’s latest Core i5-based low-voltage CPU ups the performance stakes a notch, but there aren’t many models using it yet and certainly not in this price range.

In real-world use, the M101z offers excellent day-to-day productivity performance. Unlike netbooks, where the combination of anti-virus and Windows 7 often results in glacial performance, this laptop can cope with genuine computing. This includes multi-tasking, and you certainly have enough memory to be going on with. It’s only really floored by very intensive tasks like HD video encoding, though it can play back any kind of HD video with no problems at all.

Where AMD’s chipset comes out on top is in the graphics department. While the Acer can’t even muster double figures, the M101z manages a passable 23fps in our TrackMania Nations test. This doesn’t make it a gaming machine by a long chalk, but does make playing older titles a more realistic prospect. Moreover, unlike Intel’s graphics chip, ATI’s actually supports anti-aliasing.


Every cloud has a silver lining, however, as Intel and the Acer retain their superiority in the arguably more important battery life test. Though the M101z still manages an impressive five hours battery life, the 1810TZ lasts over eight and a half. There is an element of diminishing returns here as five hours should suffice for most scenarios, but with the Acer you can be confident in leaving your charger at home. Not so the M101z.

For many this might swing things in favour of the 1810TZ, but the Dell Inspiron M101z is still an outstanding portable laptop. It’s definitely the more attractive, sturdier and most usable of the two machines, and has a keyboard we’d love to carry around with us everywhere. If battery life is uppermost in your thoughts then the 1810TZ still wins hands down, but in all other respects the Dell is the better machine.


Dell has produced an outstanding portable laptop in the Inspiron M101z. It doesn’t quite match Intel-based systems for battery life, but it’s not embarrassed by them and the build quality, features and usability of the M101z is a cut above.