What is the Dell Inspiron Gaming Desktop?

Think of gaming PCs and the Dell Inspiron brand probably isn’t the first to spring to mind. Associated more with standard desktops, Dell is expanding its Inspiron range to include entry-level gaming systems for people who don’t want to pay the high prices for an Alienware system.

With a choice of AMD Ryzen processors, a neatly designed case, and a choice of mid-level graphics cards, the Inspiron Gaming Desktop is certainly far more interesting than its name might suggest. I was sent the top-of-the range model for testing, kitted out with a Ryzen 7 1700X. In truth, a lower-spec model is a bit better value, but it’s interesting nonetheless to see what the top-spec model is capable of.

Call a machine a gaming desktop, and you need a design to match. Keeping the Inspiron’s target audience in mind, the Gaming Desktop is built into a case that offers a slight edge without going over the top. It’s set at a jaunty angle, with the front sloping up and away.

I like the way that the front grille swoops up the front and wraps around the side of the case. Blue lights shine out through the grille and illuminate the inside, although you can turn them off – but not change colour – using the bundled Dell Light Bar Controller software. 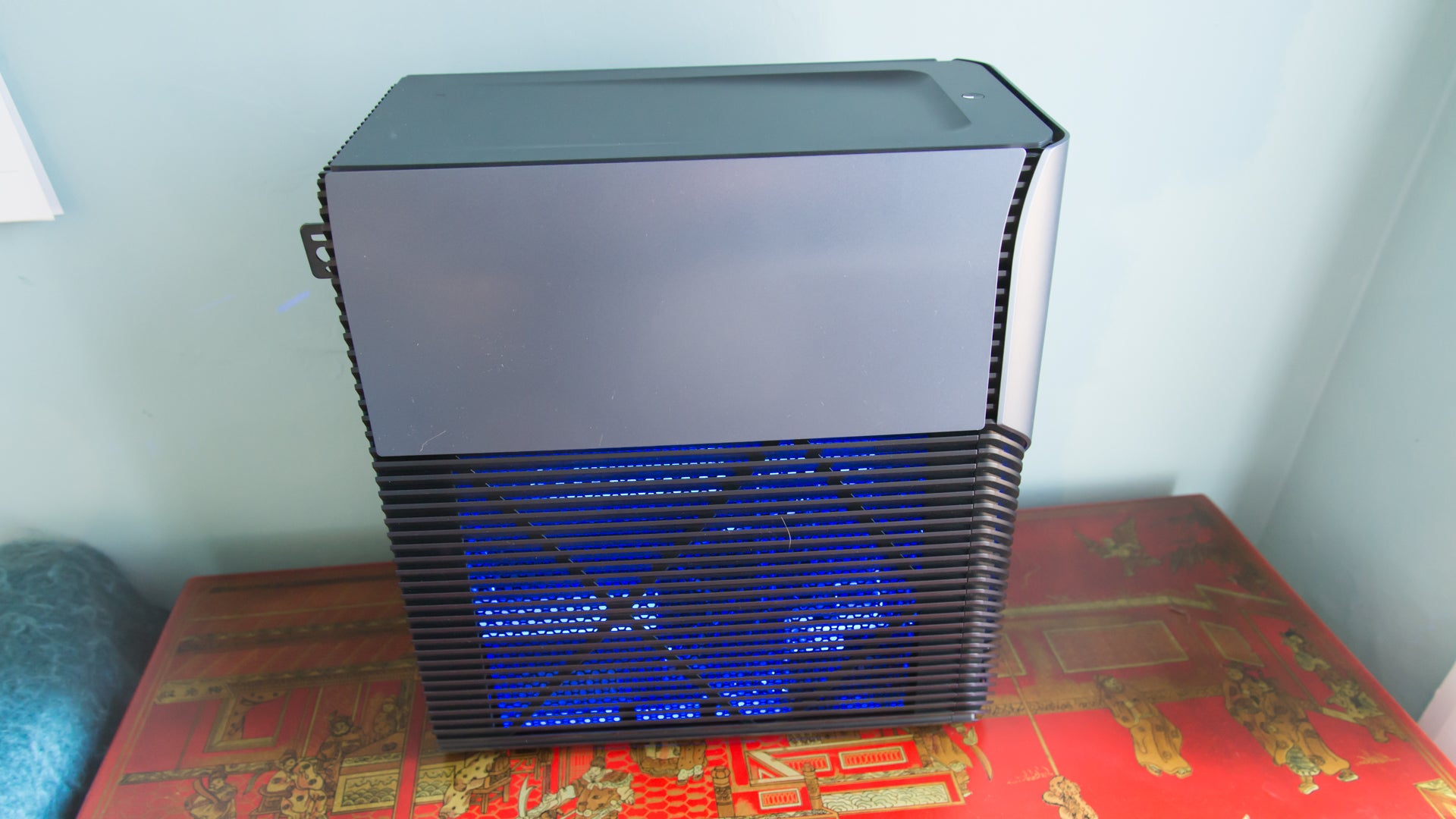 The case’s metallic finish gives this PC a fun look without it being in-your-face. Dell has made the PC practical, too, with a front panel that’s home to two USB 3.1 Gen 1 and one USB-C ports, plus an additional two USB 2.0 ports and an SD card slot. A 3.5mm headset jack is useful too. 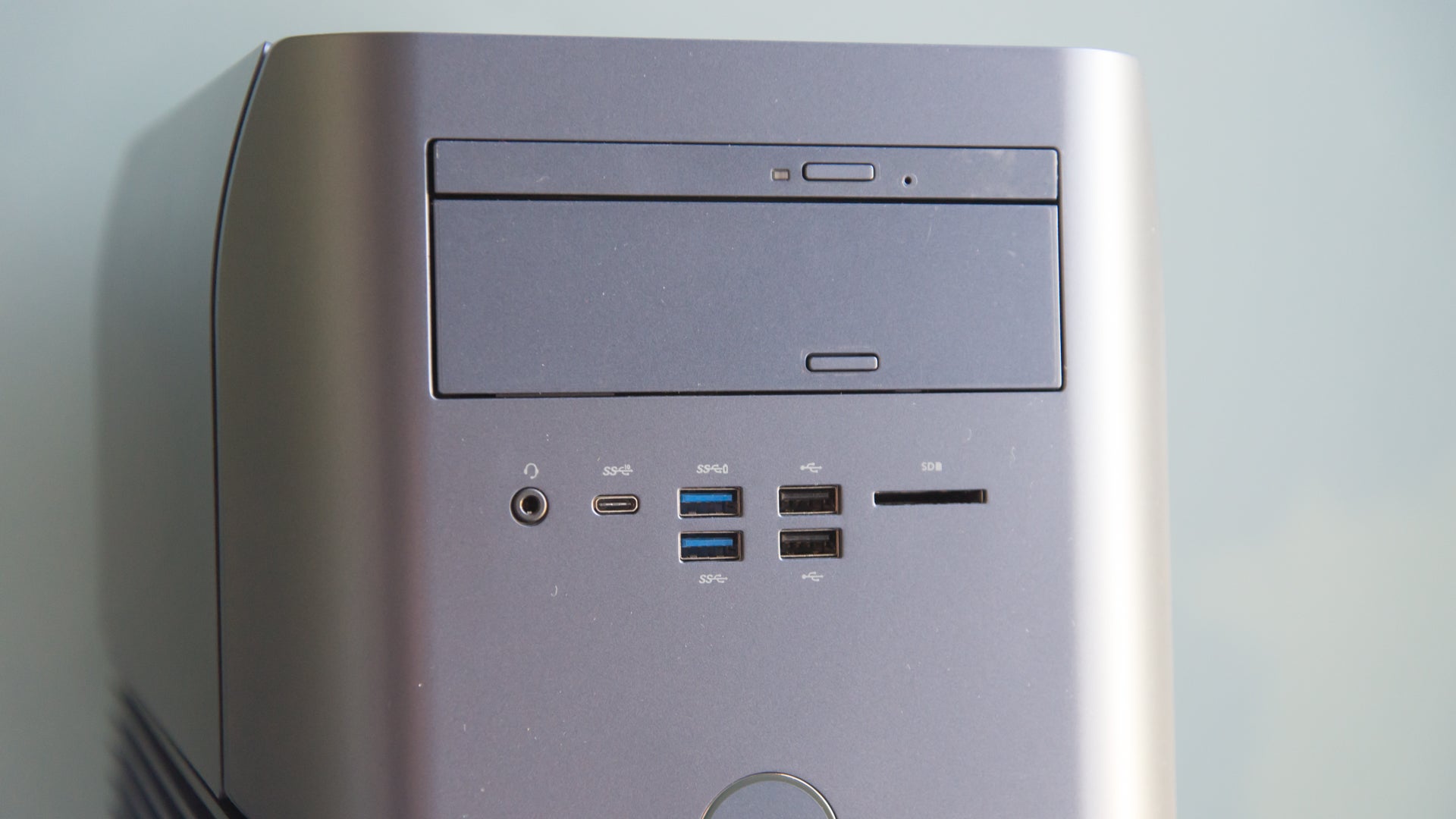 The Dell also has a built-in slimline DVD drive. The company could have opted for a full-size optical drive in the spare 5.25-inch bay, but that would have spoiled the overall look of the PC somewhat.

Around the back you’ll find everything else you’d expect: four USB 3.1 Gen 1 and two USB 2.0 ports, Gigabit Ethernet, and five 3.5mm audio outputs. And, if you have an ancient keyboard and mouse that you desperately want to use with this PC, there are two PS/2 ports as well. These ports hint at the Inspiron’s slightly more budget origins. 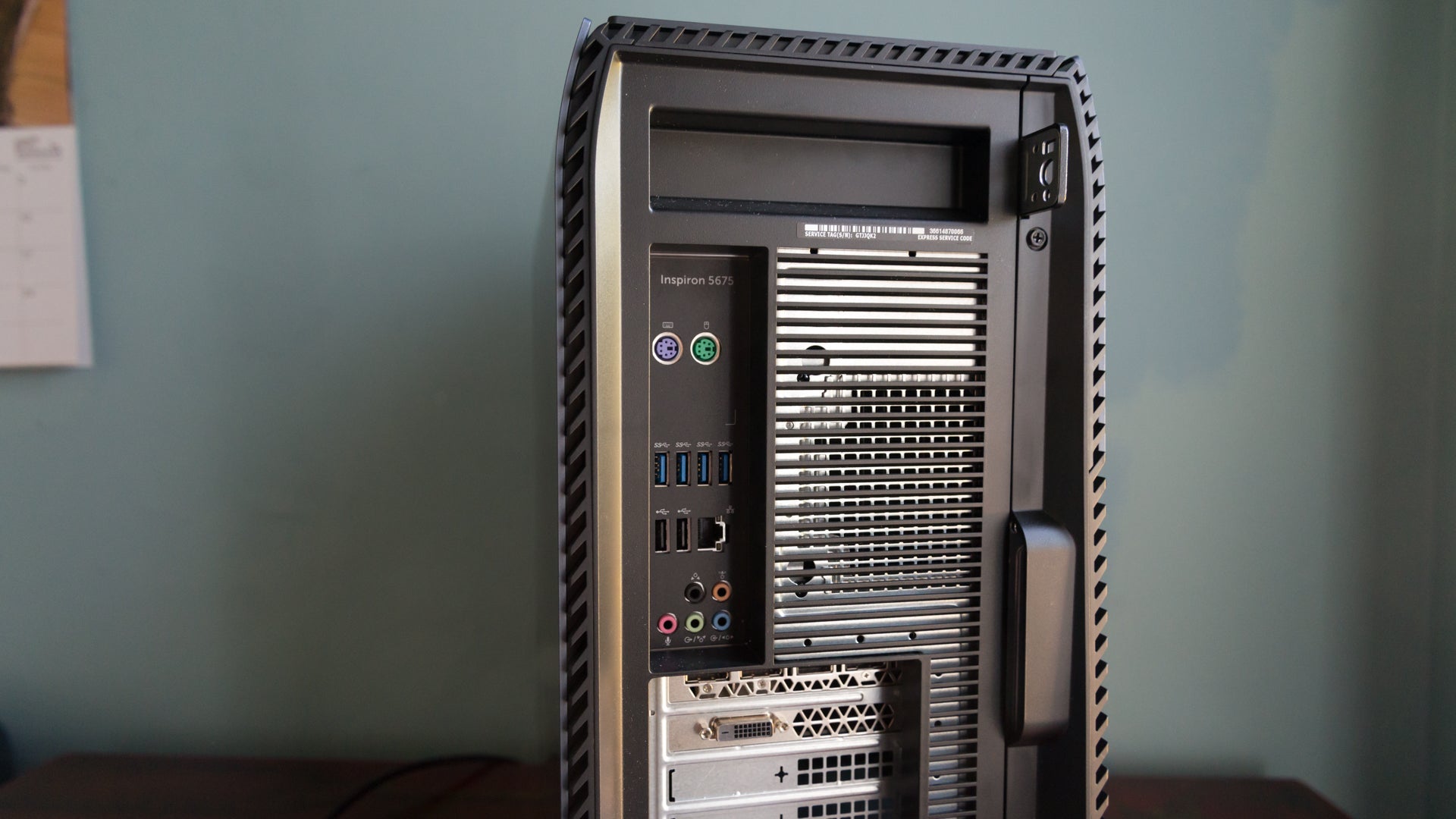 Take the side off to expose the interior, and the plain metal chassis within looks fairly basic. As with any mass-produced system, cable management has been attempted but it’s fairly hideous nonetheless; it’s best to pretend the innards don’t exist unless you really need to get in and add your own components.

As I reviewed the top-of-the-range AMD Ryzen 7 1700X version, my Inspiron Gaming Desktop review sample shipped with liquid cooling, with heat exhausted out of the rear of the system. Cheaper models get regular air cooling, which will doubtless be louder if previous Dell systems are anything to go by. 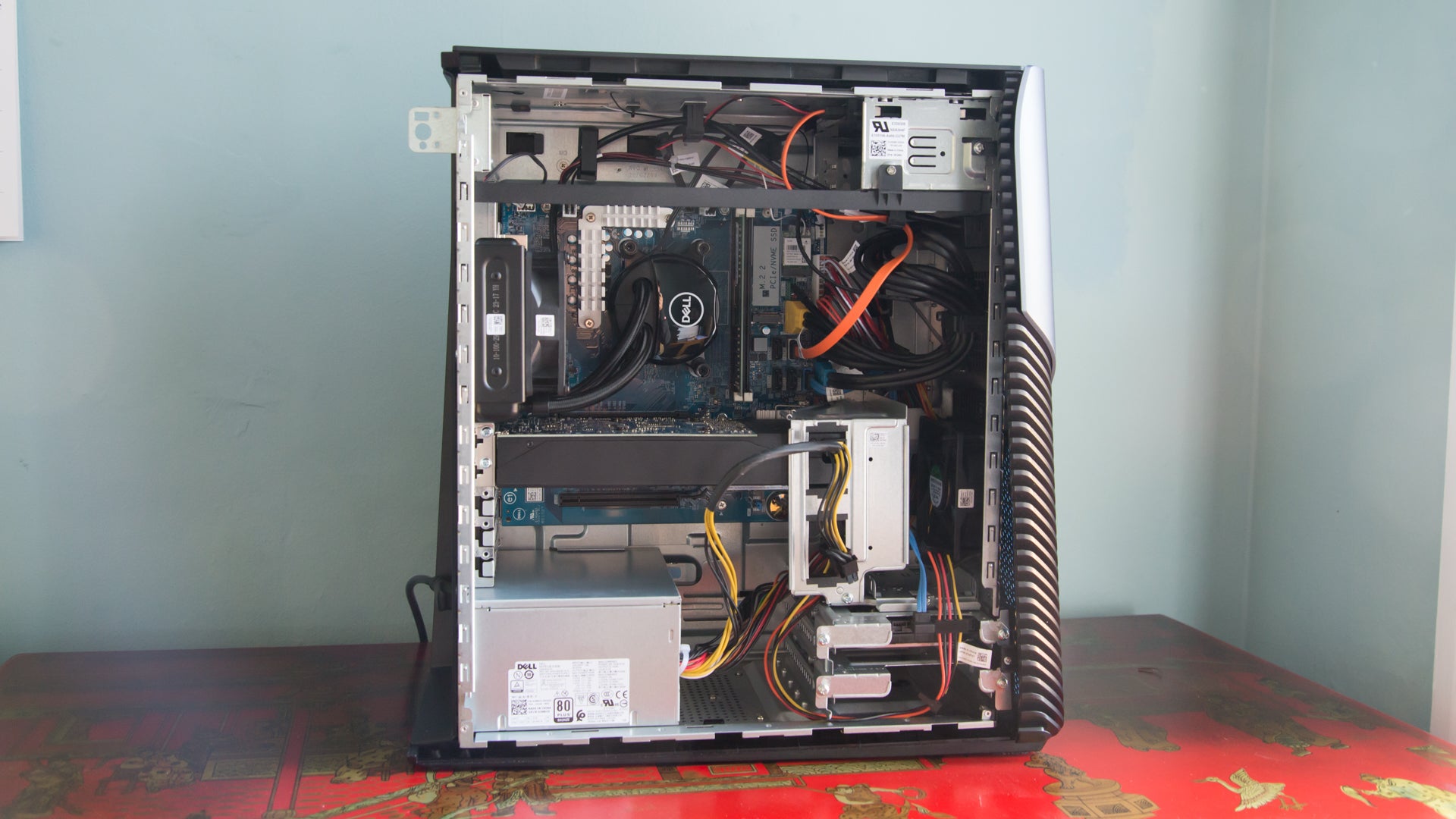 There’s a spare 3.5-inch drive bay for those who want to add more mechanical storage outside of the 1TB hard disk. Better still, with one free  M.2 slot, you can add fast additional storage to complement the existing SATA-speed 256GB M.2 SSD.

The graphics card – a 6GB GDDR5 Nvidia GeForce GTX 1060 – is supported at the rear by a plastic mount fitted into a metal cage. There’s a spare PCI E x16 slot, although since the GTX 1060 doesn’t support SLI, you’re unlikely to need it unless you fancy adding some extra outputs or inputs, such as a sound card or extra ports.

Strangely, Dell has installed the 16GB of RAM as one stick, rather than filling both for dual-channel memory. 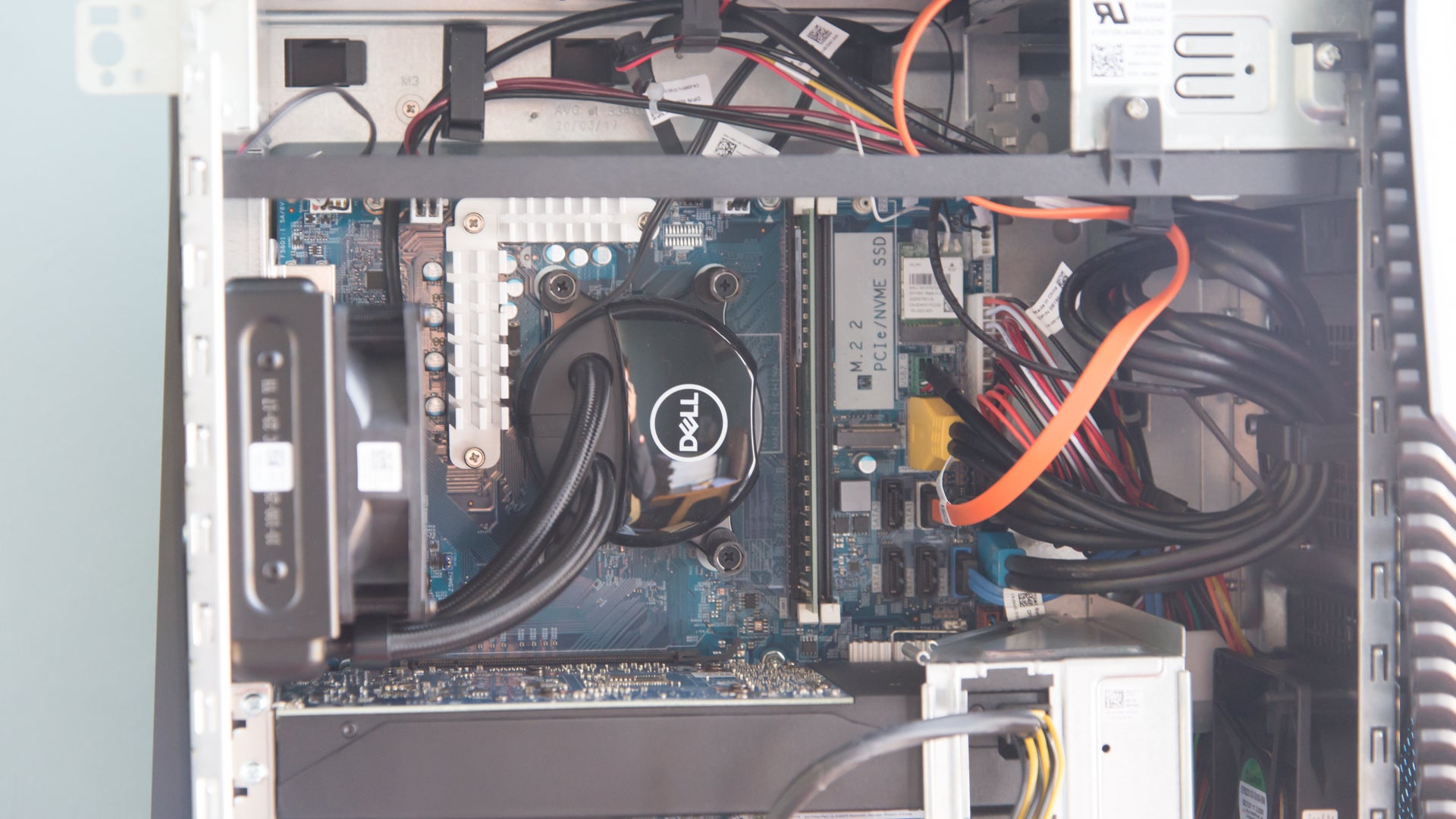 Dell has used a very basic wired keyboard and mouse set. I found that the keys offered far too much travel, and they felt soft. Typing fast and accurately was tricky; I kept missing keys. The key spacing also proved a little too wide for my liking – I’d often miss the key I was after. 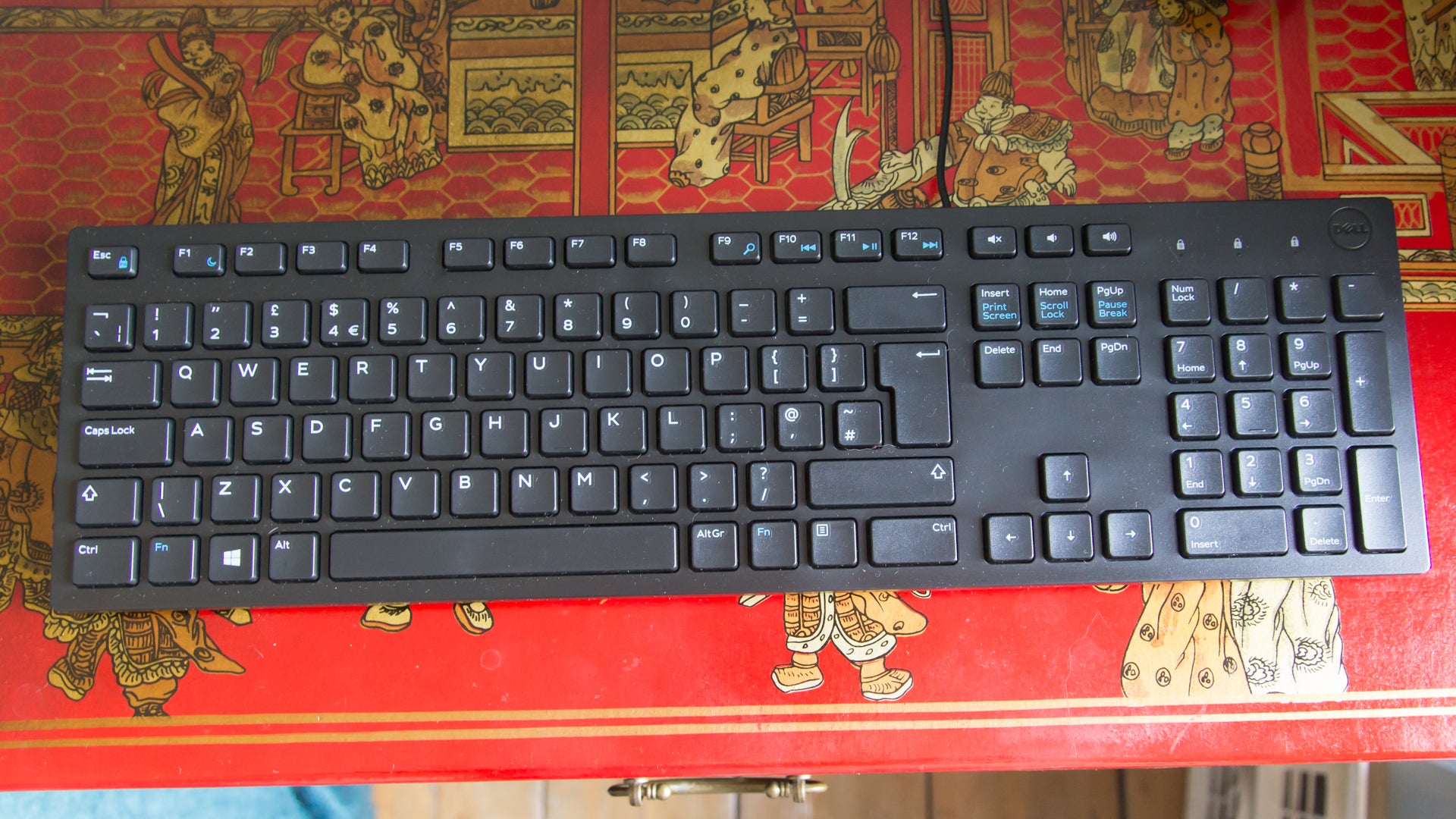 I wouldn’t get too excited about the wired optical mouse either. It has two buttons and a scroll wheel – and that’s it. I found it fine for getting around Windows, but it’s nothing to write home about.

I can’t complain too much, though, since Dell quite rightly thinks that anyone buying a gaming PC will most likely buy the keyboard and mouse they want. As a result, putting in a more expensive set would have only served to whack up the price of the system. Think of the bundled options as something that will help you set up and use the PC until you find a replacement.

Want better peripherals? These are the products we recommend:

This PC’s performance is excellent, thanks to the powerful AMD Ryzen 7 1700X. It has eight cores (16 threads) and a base clock speed of 3.4GHz, with a max turbo core speed of 3.8GHz, and the ability to self-overclock when thermal conditions allow for it. While the single-core Geekbench 4 score of 3899 is good, it lags behind similarly-priced Intel processors in the same test. However, the multi-core score of 17,411 puts the Inspiron Gaming Desktop in the same league as an overclocked Core i7-7700K system. In big projects, such as rendering video, the 1700X will easily beat Intel’s seventh-gen options.

Likewise, the PCMark 8 Home score of 4829 is fantastic. Keep in mind that Intel’s 8th-generation Core processors have now launched, with top-end chips such as the Core i7-8700K offering Ryzen-beating performance at the expense of running a little hotter and a bit pricier. Dell currently doesn’t ship any Inspiron Gaming Desktops with this chip, but it’s worth keeping in mind if you’re reading this review after October 2017.

I used CrystalDiskMark to test the 256MB SK Hynix SC311 M.2 SSD. Sequential read speeds of 562.7MB/sec and 443.6MB/sec are at the top of what I’d expect from a SATA drive, and certainly make Windows and applications load quickly. However, for this price, I’d have liked a faster NVMe drive. Further storage is provided by a 1TB mechanical hard disk, which is a little stingy for the price; I’d expect a 2TB model. Keep in mind that your PC may well ship with different storage entirely; big-box PC makers often swap primary storage drives like they’re going out of fashion, and ship their products with whatever they can get a good deal on. For example, right now the Inspiron Gaming Desktop is listed on Dell’s UK website as being equipped with a 2.5-inch SATA drive instead of an M.2 unit. Doubtless that’ll change in the future. 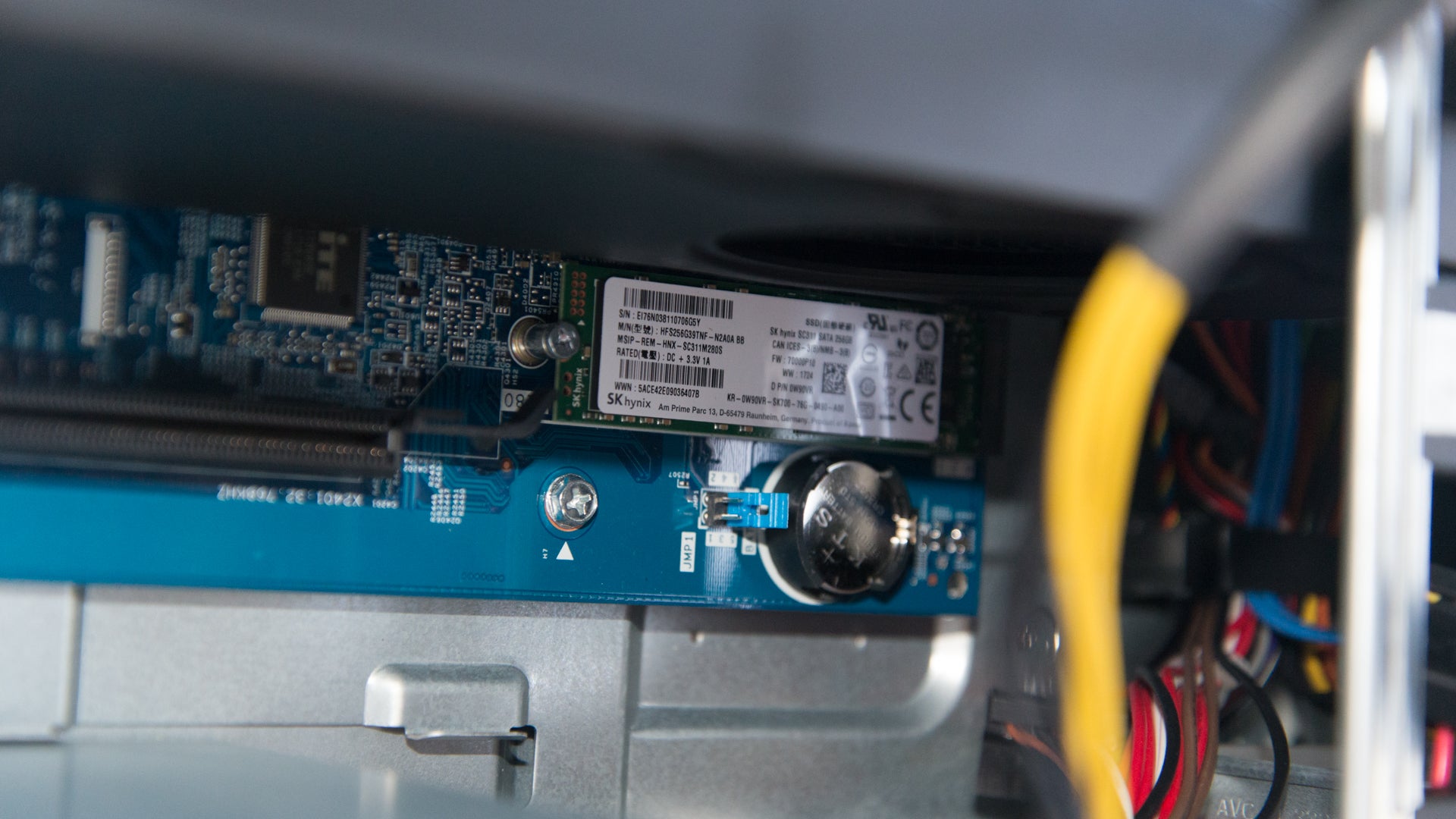 Although the PC turns on with a whoosh, giving the impression it will be loud, the sound soon dies down. When idle, the Dell Inspiron Gaming Desktop proved difficult to hear. While playing games, the fans speed up and the computer becomes louder – but not to annoying levels.

Should I buy the Dell Inspiron Gaming Desktop?

Dell has done a decent job with this mid-range gaming PC. A fast processor, great graphics card and SSD combine to make it a slick 1440p machine. And, there’s room to upgrade and add faster solid-state storage. To top it off, this PC looks great, too, even if the internal chassis feels a little cheap.

At £1,299 for the model I reviewed, the Inspiron Gaming Desktop offers fairly good value – much of the cost has gone towards that fast processor. Drop down to the spec with 8GB of RAM, a quad-core Ryzen 5 1400 CPU and a Radeon RX 580 graphics card, and you’ll get similar gaming performance for £999; you lose liquid cooling, but the other specs remain the same. You can get this PC for even less at the likes of Currys, with a Ryzen 3 model with an eSports-friendly AMD RX 560 graphics card on board.

For those looking for a simple PC on which to play games with a 1440p or lower display, the Dell Inspiron Gaming Desktop punches above the brand’s budget roots and is a good choice.

A great-looking, quick gaming PC that can handle games easily at 1440p.