The Dell Inspiron AIO 5475 is part of Dell’s new Inspiron 5000 all-in-one line-up. With its classy exterior upgrade, the AIO 5475 looks far nicer than its predecessors and much more like a premium desktop.

But, inside sits an older generation AMD processor, which makes this computer slower than many of its rivals. Given the relatively high price, this is an all-in-one with some significant challenges and tough competition.

I can’t complain about the AIO 5475’s design. While the old Inspiron 5000-series had rather thick bezels, the AIO 5475 has Dell’s increasingly-common ‘InfityEdge’ screen, similar to that seen on the excellent XPS 13 laptop.

With the screen reaching from edge-to-edge, the AIO 5475 looks gorgeous. And with the thinnest of borders, the 23.8-inch panel isn’t overly imposing; this all-in-one doesn’t take up much room on the desk. A small ‘chin’ runs across the bottom, housing the computer’s speakers and webcam. With its black grille, this strip looks great and gives the AIO 5475 a smart and unique look. I think it’s fair to say that this all-in-one is every bit as attractive as the iMac. 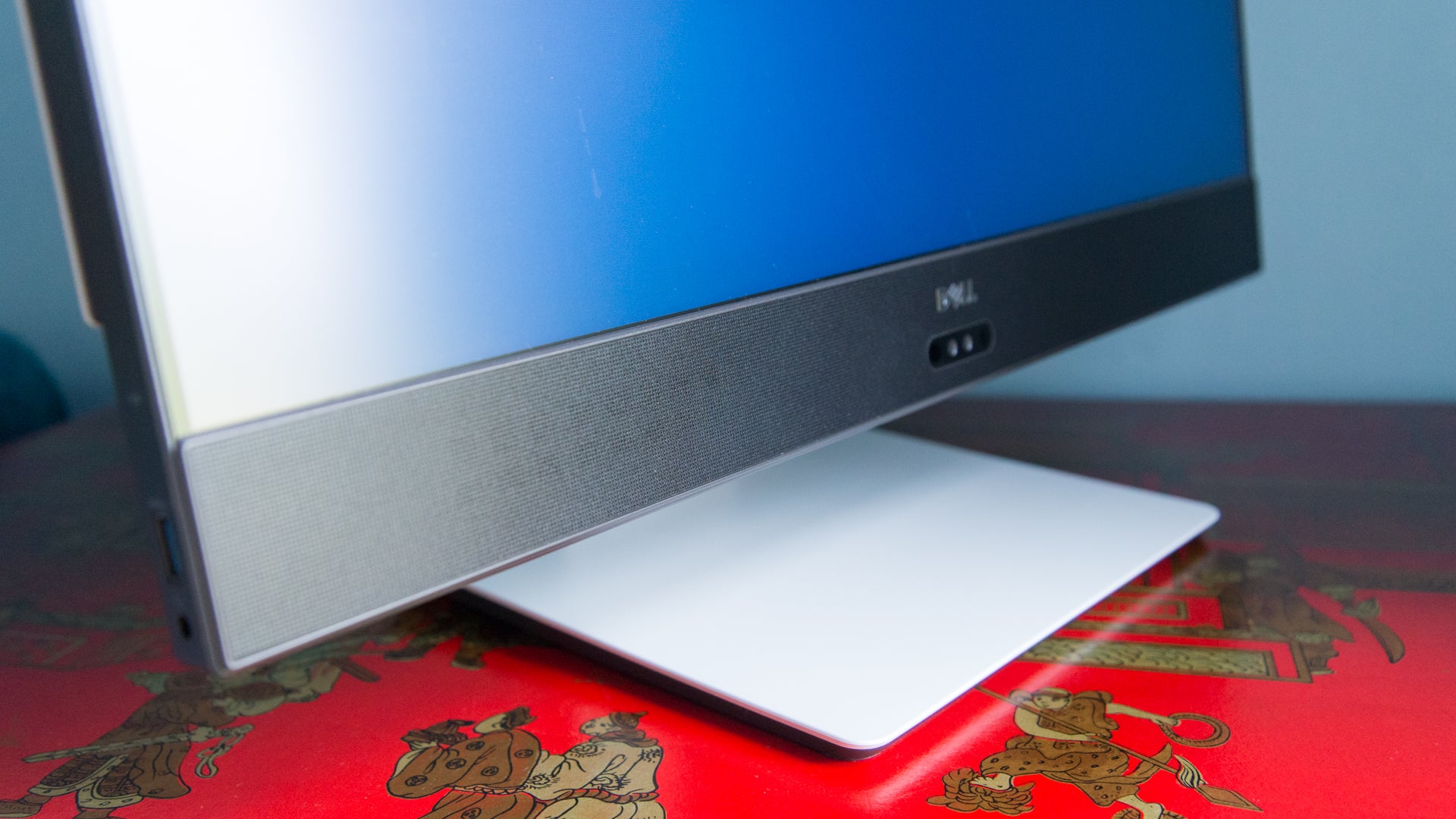 Dell’s used plastic, rather than metal, for the chassis but with so little of it on display from the front, the AIO 5475 maintains its classy high-end looks. Around the back, you get a glossy white panel and white fully-articulated stand.

A complaint with all-in-ones is that it can often be impractical and annoying to get the rear ports. There are no such issues with the AIO 5475. On the left-hand side, there’s a single USB 3.1 port, 3.5mm headset jack and SD card reader. For most ordinary jobs, then, you don’t need to spin this computer around to get the ports. 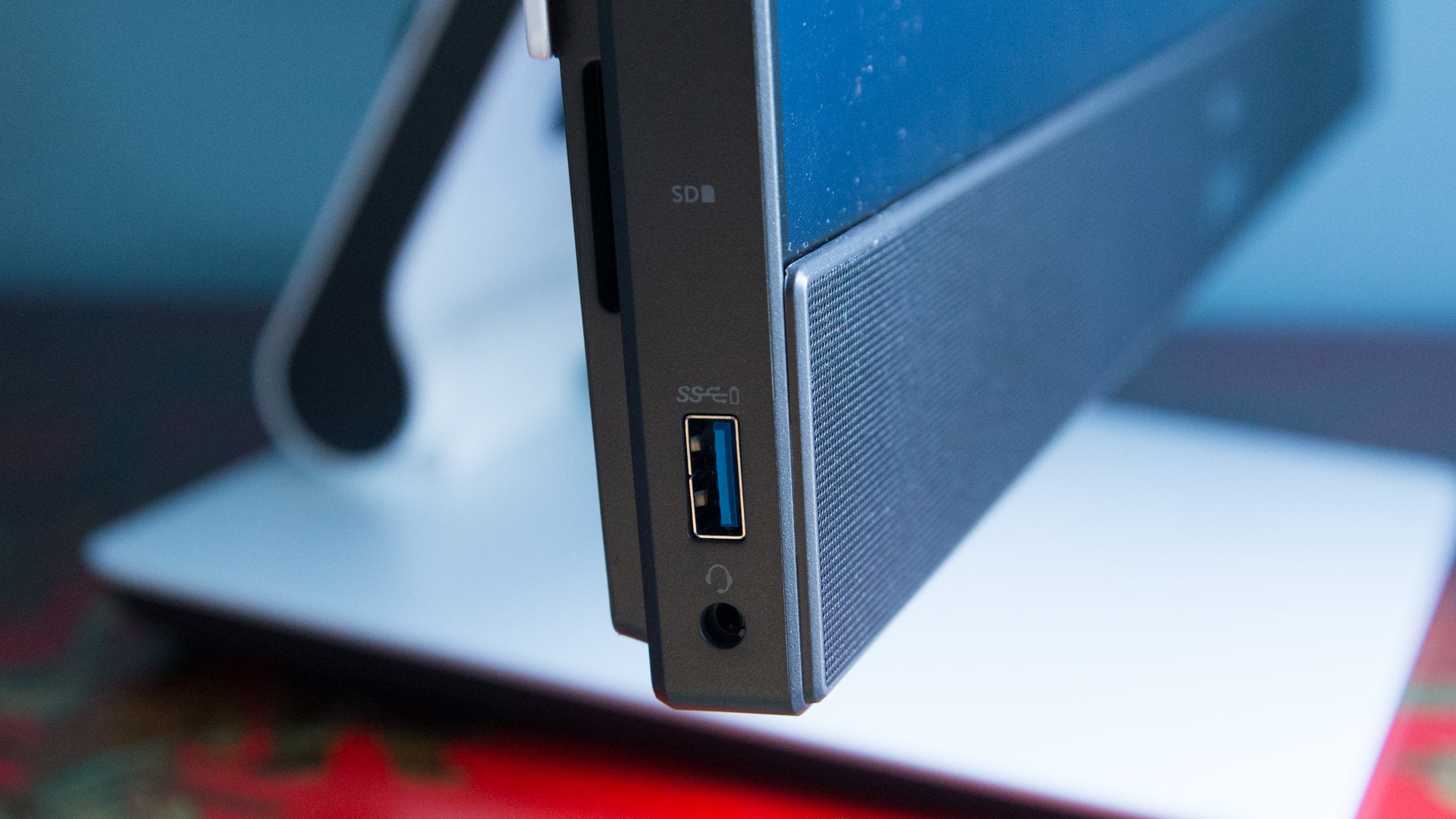 At the rear, you get a bunch of ports for more permanently connected devices, all neatly positioned around the stand where they’re easy to reach.

Ports include two USB 2.0, three USB 3.1, one USB Type-C, audio output and Gigabit Ethernet (802.11ac Wi-Fi is built-in, too). You’ll need to give up one USB port for the wireless keyboard and mouse’s receiver; again, it appears as though Apple is the only company that can make an integrated receiver. 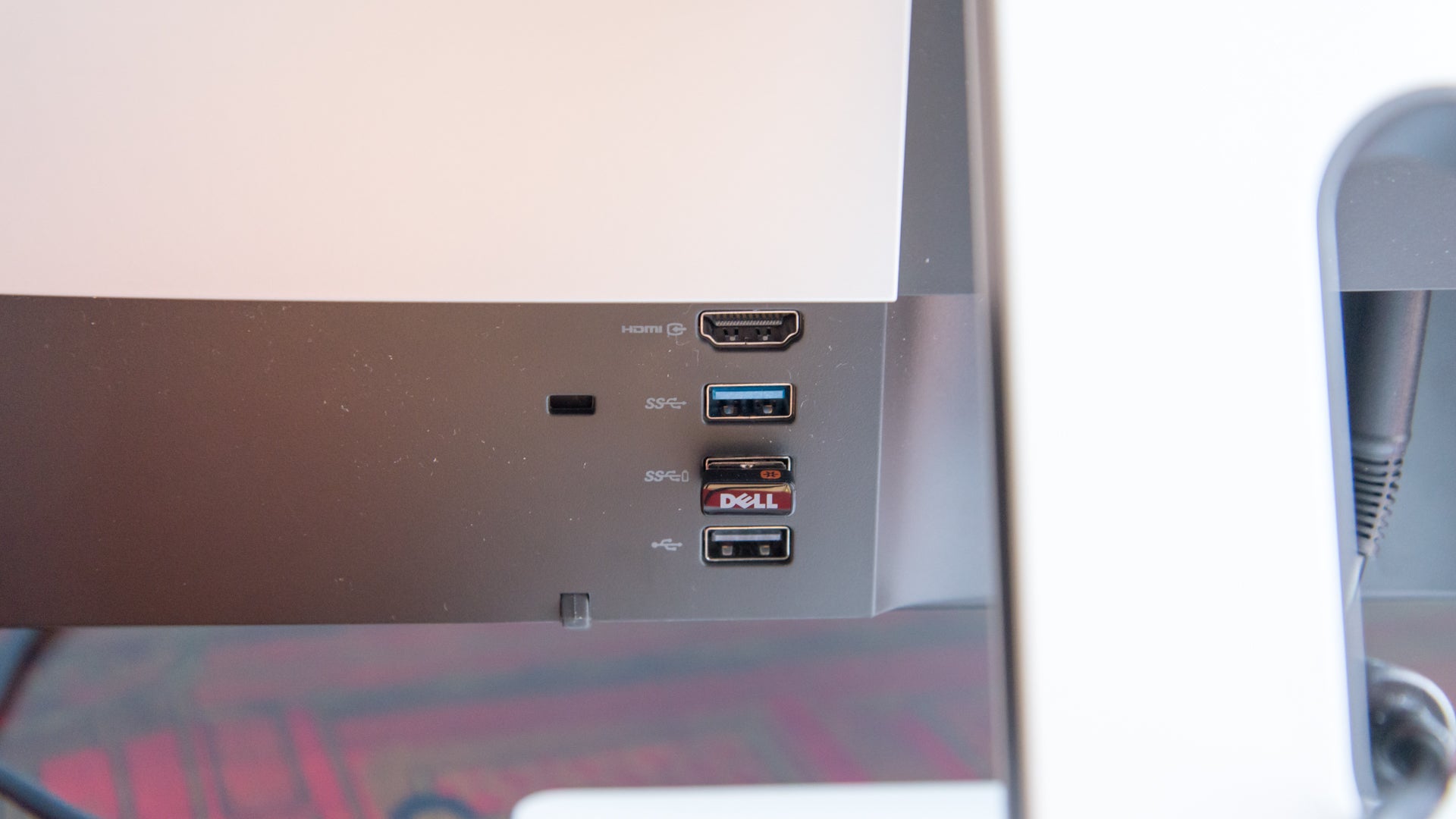 Impressively, there’s both an HDMI input and HDMI output so that you can use the AIO 5475’s screen for external devices such as a games console, and hook up a second display. Conveniently, the input selector is located underneath the screen on the right-hand side. 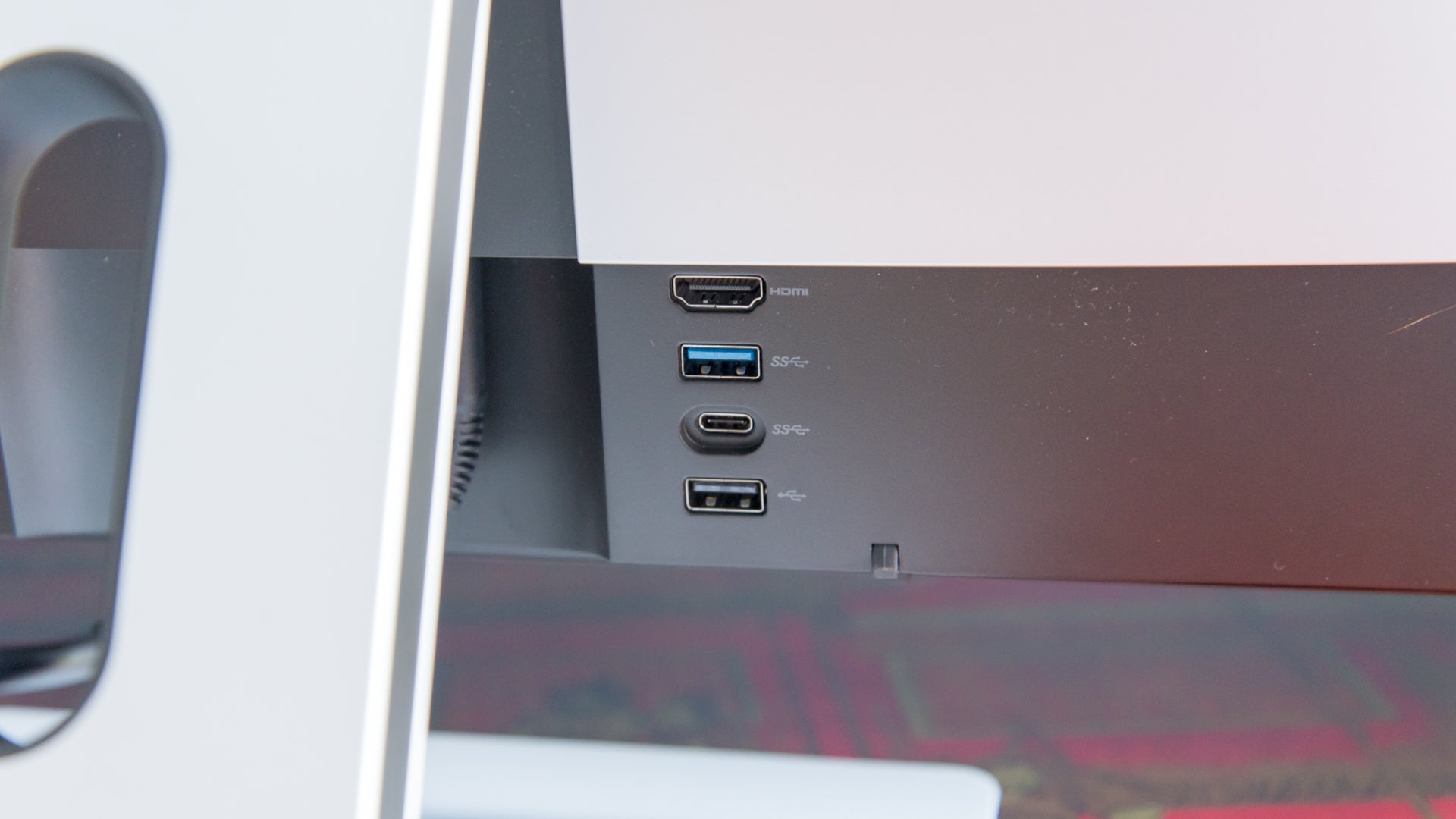 Dell has bundled a basic keyboard and mouse with the AIO 5475. I’m not a huge fan of the keyboard. Its keys are spongy and a little unresponsive, so I found it hard to type accurately at speed. I’d definitely swap this keyboard out for a better one. 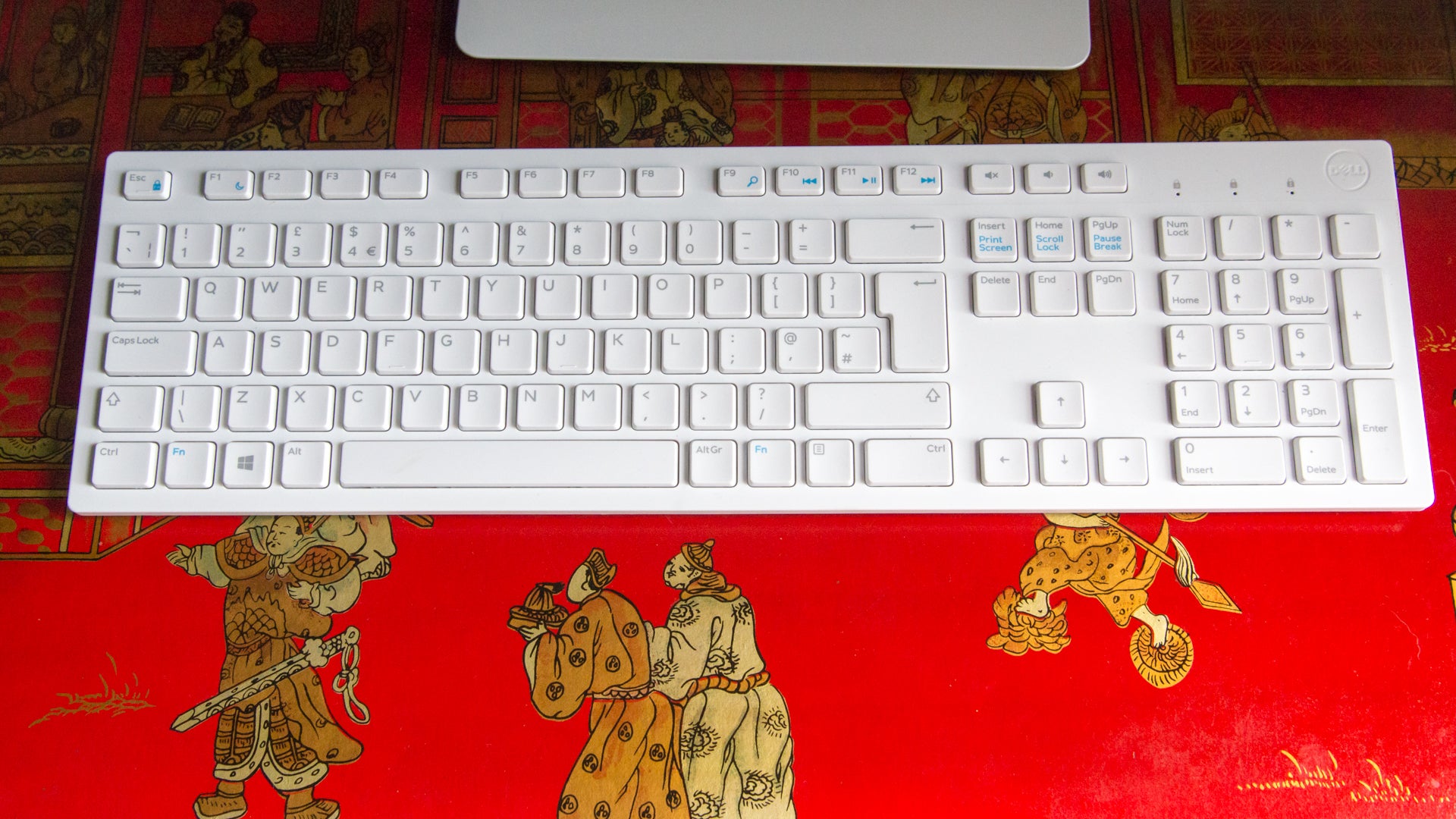 The mouse is rather basic with just two buttons and a scroll wheel, but it’s responsive enough and fits comfortably in the hand. Even so, I’d prefer a mouse with back and forward buttons, so would most likely upgrade this peripheral, too. 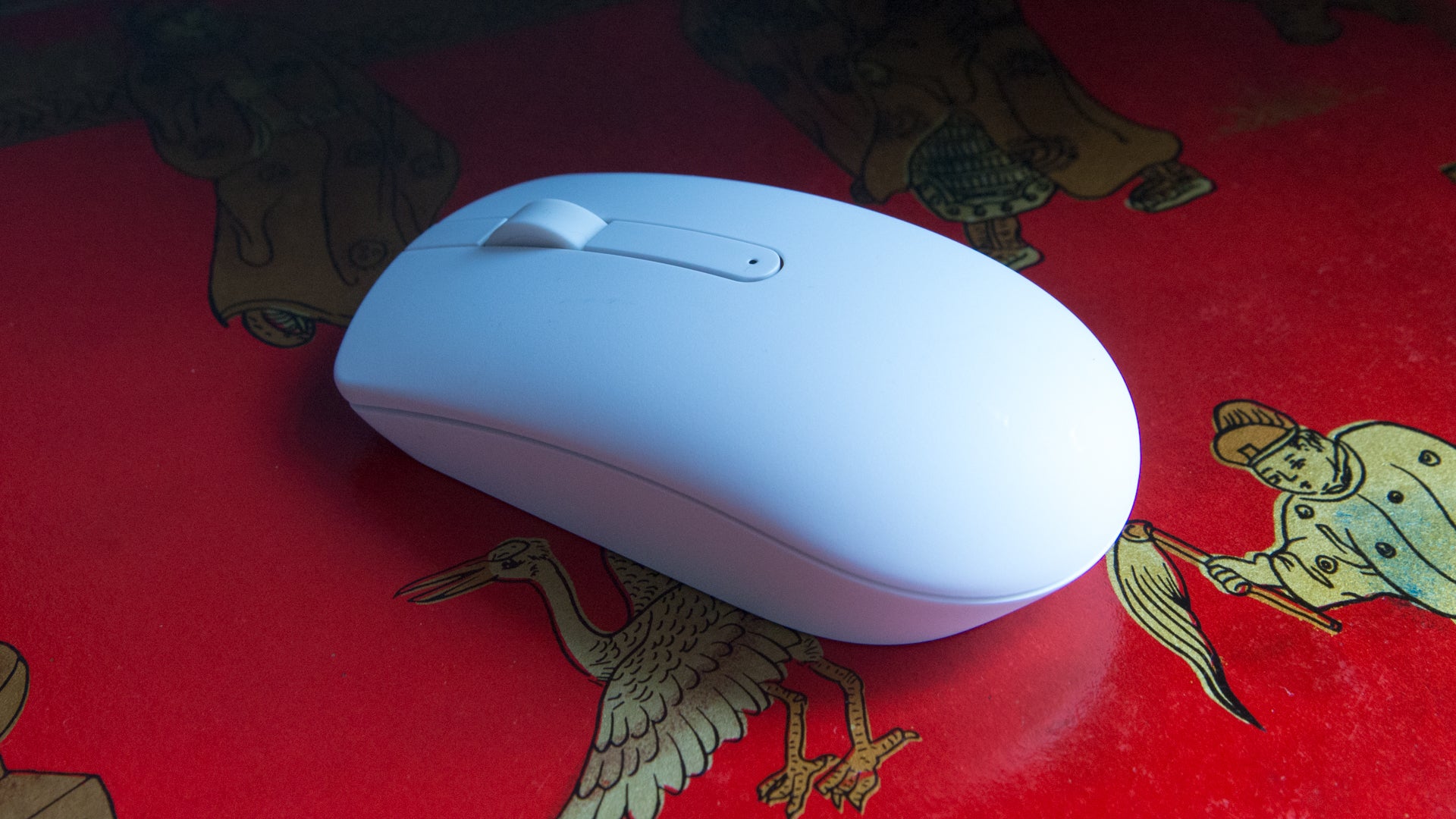 Using 1920 x 1080 resolution is a fair choice on a display this size. It’s enough resolution to provide plenty of space for work while remaining sharp and detailed enough for photos, videos and games. 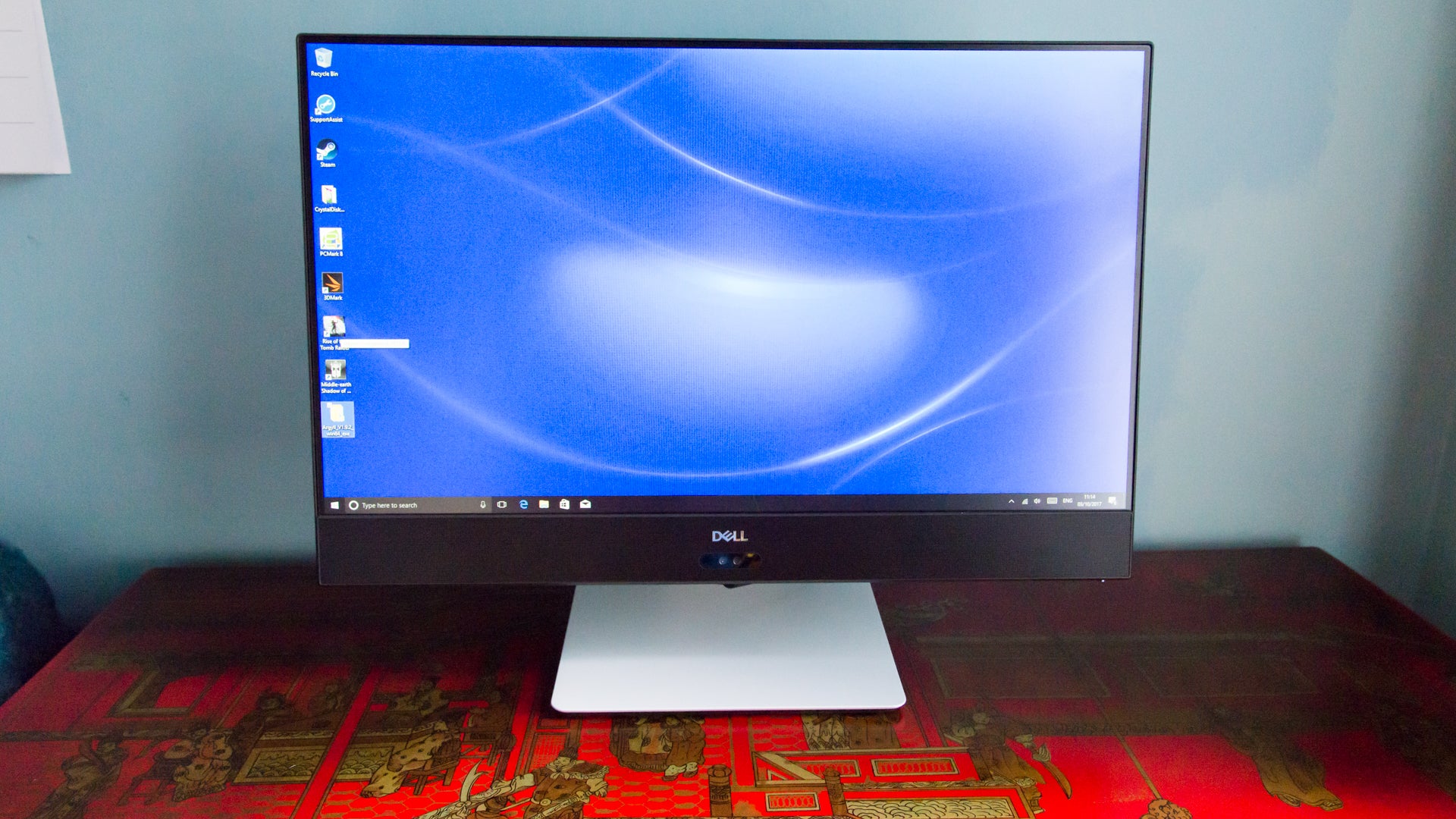 Dell has used an IPS panel for this all-in-one. Image quality is pretty good, and I measured it as able to produce 91.4% of the sRGB colour gamut, with Delta E of 1.45 (closer to zero is better) demonstrating decent colour accuracy. Maximum brightness of 198 nits is a little low, and the contrast ratio of 823:1 a bit disappointing. As a result of the low contrast, turning up the brightness to an acceptable level left blacks looking a little too bright.

Viewing angles are excellent, and there’s no loss of picture quality as you move around the screen. That’s good news, as you can use the display at all the angles that the articulated stand allows. With every position available from upright to practically flat, I found that the stand made using the touchscreen simple. 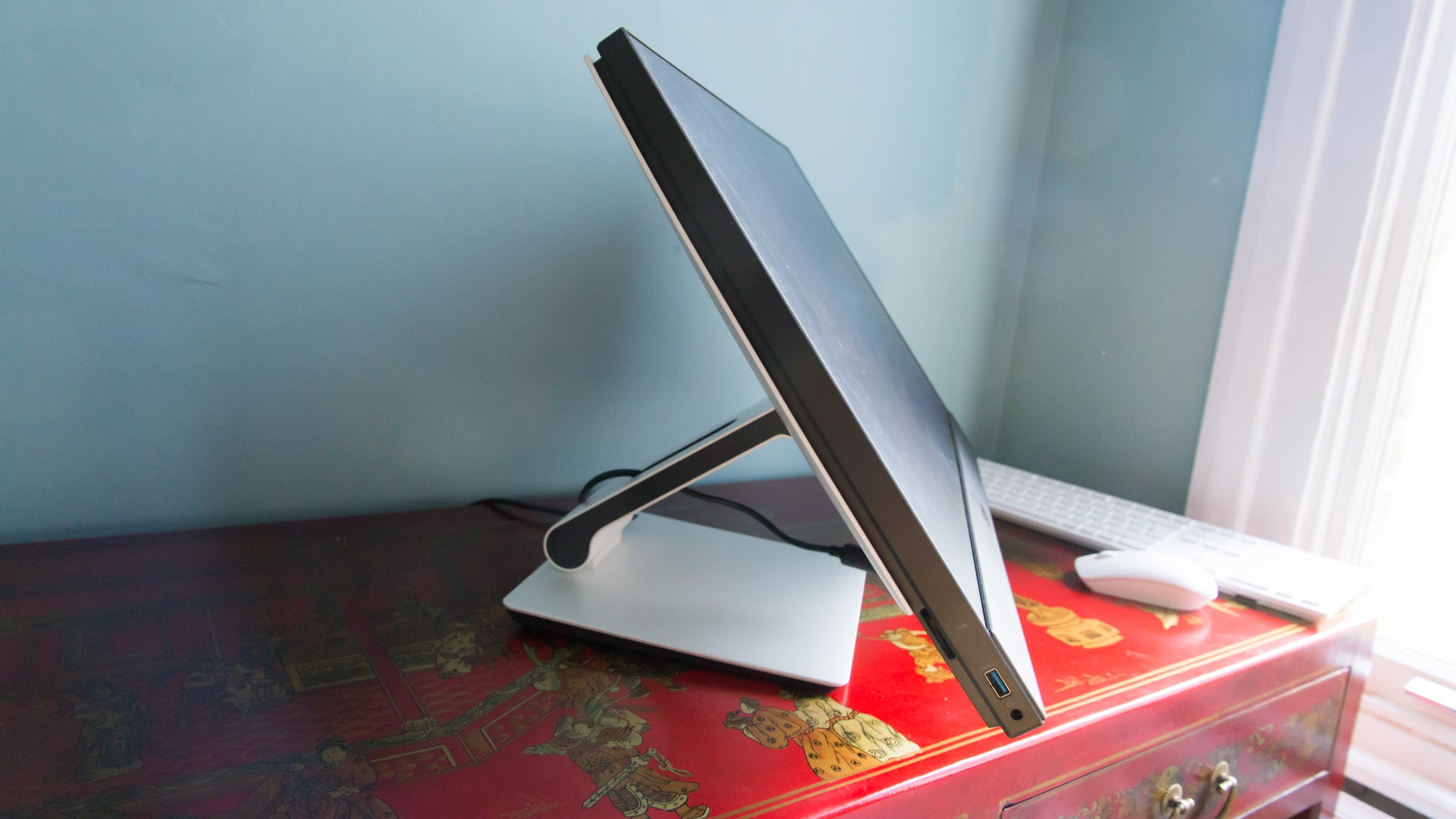 Sound quality from the AIO 5475 is great. Whacking the volume up shows that this computer can produce loud audio without distortion. Bass is a little lacking, but the clean, balanced audio from this PC means that you can watch videos without immediately reaching for a headset.

Dell has placed the camera at the bottom of the screen, shooting rather unflatteringly upwards. Image quality is fine for the occasional video chat, but the picture is very noisy. The camera is Windows Hello compatible, so you can use it to unlock your PC just by looking at it, which is a very convenient feature still not present on all AIO PCs. 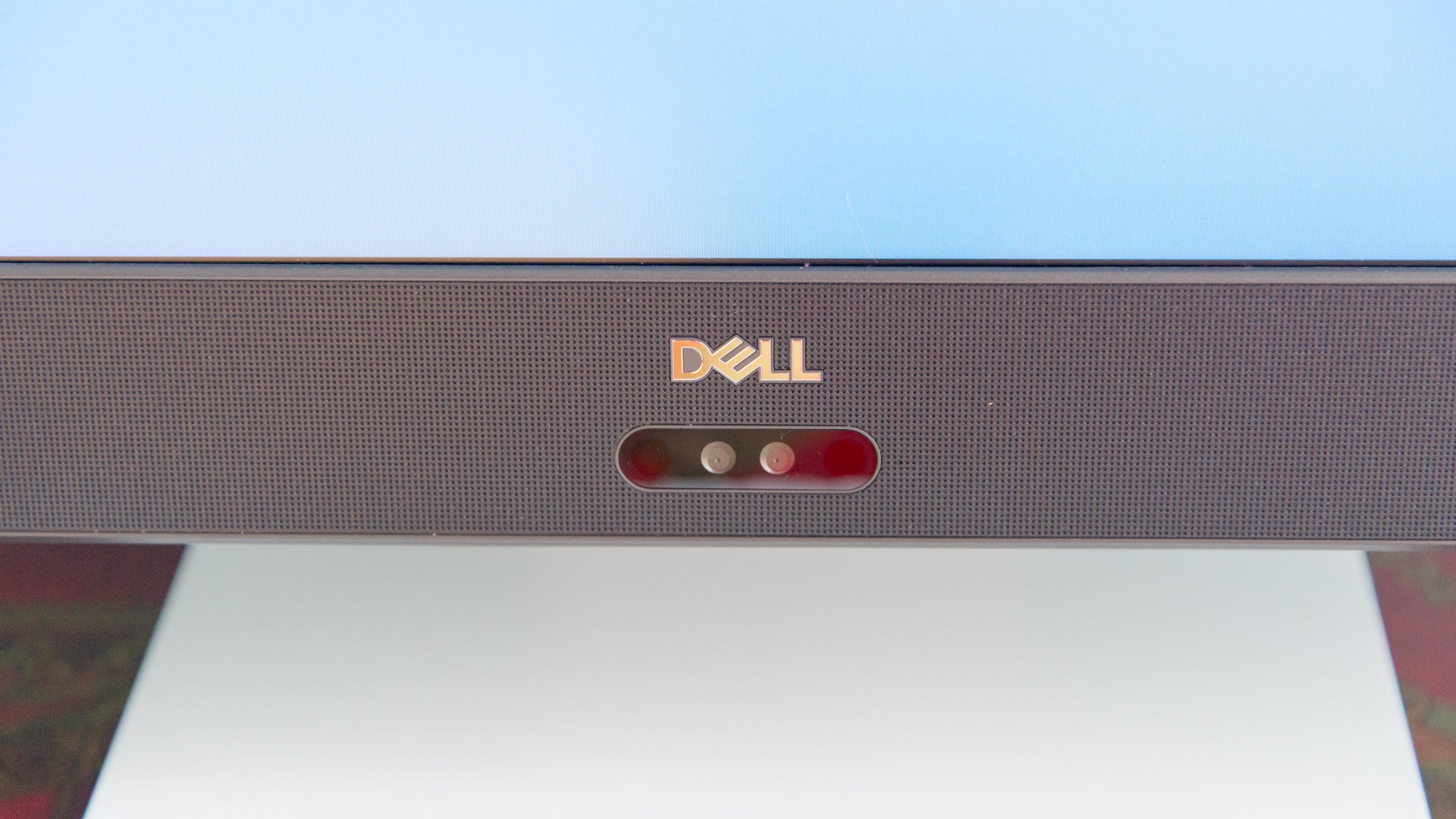 There’s an integrated microphone, too, which clearly picked up my voice when sitting in front of the PC.

It’s more than a little disappointing that Dell has opted to use an older-generation AMD A12 CPU, rather than a more modern AMD Ryzen or Intel chip. The 3.1GHz quad-core A12-9800E, paired with 8GB of RAM, wasn’t particularly quick in the benchmarks I put it through.

In Geekbench 4, scores of 2404 in the single-core and 5923 in the multi-core tests are a way off the pace set by the competition. In fact, these are similar scores as the Samsung Galaxy Book 10 got, and that uses a low-power dual-core Core m3-7Y30. As a result, the AIO 5475 can feel slightly sluggish. For example, switching to a full-screen video in YouTube takes a couple of seconds, which I don’t expect to see on a modern PC and certainly not one at this price.

Gaming performance is better thanks to the 4GB Radeon RX560 GPU. Managing a 38.46fps in Shadow of Mordor and 29.57fps in Rise of the Tomb Raider, at maximum graphics settings, this graphics chip can handle most games. You may need to dial down detail settings to get smooth frame rates.

When idle, the AIO 5475 is exceptionally quiet, with just a gentle fan hum that you have to strain to hear. As the processor and GPU come under load, the fan speed kicks up and is audible, but far from annoying.

It’s good to see a 128GB SSD for Windows 10 and your most-used applications. This makes the PC feel snappy, and it boots quickly, even if the SSD’s read speeds of 561.2MB/s and write speeds of 135.8MB/s aren’t the quickest. A 1TB mechanical hard disk gives plenty of storage, although 2TB would seem fairer at this price.

Should I buy the Dell Inspiron AIO 5475?

Dell has done a beautiful job with the AIO 5475’s design, and this is a classy-looking desktop computer. Paired with the quality screen, great range of ports and smart articulated stand, this really should be a great all-rounder. However, the choice of the AMD A12 CPU really lets the side down, and it’s an underpowered processor that feels out-of-place at this price. If this PC was considerably cheaper, the processor choice wouldn’t be so much of a problem; as it stands, it’s far too expensive to recommend.

A great-looking and smartly-designed all-in-one, but the processor really lets it down.