Dell’s new Inspiron is a classy-looking system that faces a significant challenge. The Inspiron range is designed to straddle both the home and office worlds – but with desktops, laptops, hybrids and tablets all popular in these environments, this new PC faces strong and varied competition.

It starts strongly, though: very few Windows 10 PCs can claim to be as sleek as Dell’s latest effort. The narrow main section shows off slick bezelled edges, the metal-coated base offers impressive versatility, and a decent selection of internal components point to a PC that’s highly capable.

The Inspiron 24 700’s 23.8in screen is surrounded by a squared-off metal frame that holds snappy buttons, and the back is made from subtle dark plastic. The base is topped with a layer of brushed metal, with most of the Dell’s ports hidden in the black plastic beneath.

It’s a smart system that does enough to distinguish itself from Apple’s iMac and its herd of copycat Windows machines.

Build quality is excellent. The flat base panel is impressively solid and there’s no give in the plastic around the rear. The joins between the edges of the various panels feel sturdy, too, making this machine feel like a quality piece of kit.

The stand is double-hinged, which means it squats down with a reassuring motion and enables the screen to be used in a horizontal position. That’s more versatility than I see from most all-in-ones and, as such, it makes this system one of the most practical around. 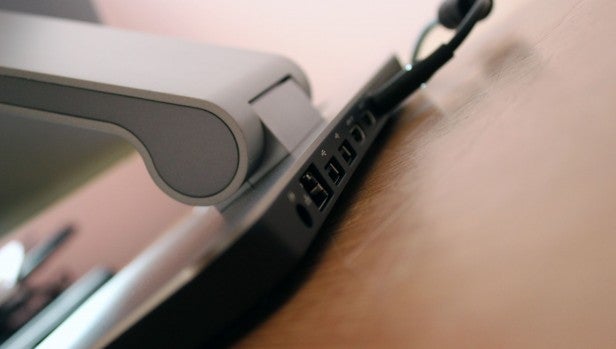 It doesn’t taper to a sharp edge like Apple’s latest iMacs, but the Dell’s squared-off outer rim is still only 12mm thick – far thinner than most Windows-based rivals – and the main body of the machine is only 30mm from front to back. The stand is 267mm wide, leaving plenty of space on your desk.

The Dell’s ports are spread around the base, which makes them easy to reach. The left and right sides have two USB 3.0 ports each, and there’s an accessible SD card slot. Pairs of USB 2.0 and HDMI sockets sir around the back, and the screen’s right-hand edge is home to buttons to switch display outputs and change the screen brightness.

All of the above puts the Dell Inspiron 24 7000 on good footing when compared to most Windows all-in-ones and to Apple’s machine. The iMac lacks dedicated display outputs and it has only four USB connectors, although it does include two highly-desirable Thunderbolt ports that video creatives won’t want to be without.

On the inside of the Dell you’ll find Gigabit Ethernet and Bluetooth 4.0, but slightly disappointing wireless. The aerial included is a single-band 2.4GHz model that connects only to the 802.11bgn standards; Apple kits its desktops out with dual-band 802.11ac hardware. This is a huge surprise and it’s something that ages the Inspiron 24 7000 considerably; it’s the most obvious cost-cutting measure. 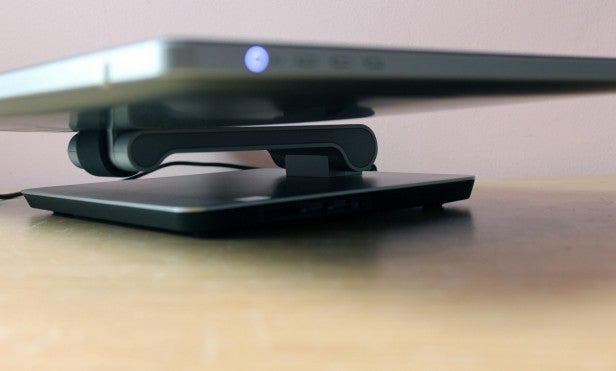 The touchscreen’s 1,920 x 1,080 resolution is a sensible option for the Inspiron. It’s high enough to provide plenty of space for work, web browsing and entertainment, but not so high that it will unduly tax the components, plus it’s the ideal resolution for a 24in panel.

The finish is glossy, which is what I expect from a home machine – although the surface does mean that lighting can be a distraction if you have harsh overhead lighting.

Screen quality is decent, for the most part. The Dell’s contrast ratio sits at exactly 1,000:1, which means the screen displays a good range of shades. The 0.22-nit black level is suitably deep, and a brightness of 220 nits will be sufficient for homes and offices – although it won’t satisfy creatives who require a bit more punch in their work.

The colour temperature measurement of 6,746K is barely over the ideal figure of 6,500K – and while it’s on the cool side, it doesn’t deviate enough to cause problems for users. The average Delta E of 2.43 is good, rather than great.

The Dell’s viewing angles are fine and the panel’s uniformity levels are consistent, with no big deviations or obvious backlight bleed.

That’s an ideal overall conclusion for the Dell’s screen. It performs well in most areas but doesn’t push beyond that in any department – but that’s fine; home users and those undertaking basic office tasks won’t need the kind of quality offered by proper professional screens.

It’s a similar story with the audio kit. The Dell’s speakers are installed into the thicker base rather than the slim screen, and this extra room has enabled the Inspiron to offer a bit more oomph than most all-in-ones and monitors. There’s decent bass here, and it’s bolstered by a clear mid-range and reasonable high-end.

I’d have preferred a little more nuance, and the extreme high-end does get a tad tinny, but those are minor criticisms and the Dell’s audio kit is easily good enough for music, movies and games.

Related: Our Verdict on the Best Wi-Fi Extenders

Next
Specs, Performance and Verdict Review